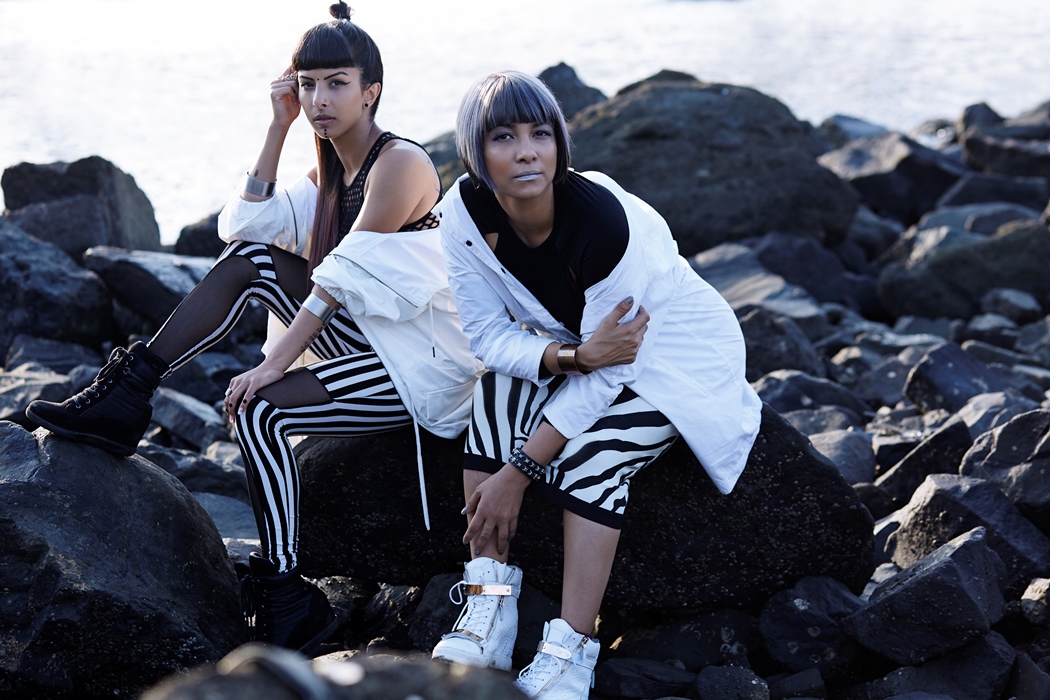 Anushka + Agent are no strangers to party institutions. Before they came together as a genre-defying duo, Anushka Menon and Smita Singh spent years on the other side of the console – organizing, curating and attending gigs. But as much as they loved being a part of the madness, there was always something missing, according to Menon, “We’d have to wait for either a friend who was playing a gig or someone well-known to be coming if we wanted good music, if we went out on a regular night it would be pretty terrible. We decided that we would play the kind of music that we wanted to hear.” Menon is a New-Delhi based fashion photographer and connoisseur of bass jams. Her co-conspirator Singh is a designer, entrepreneur and co-founder of Magnetic Fields Festival. Although each of them excels in their respective roles behind the scenes, their transition to the spotlight was a natural progression, says Singh, “I don’t think we ever imagined that we’d start a DJ project. Both of us had been individually working on our own music for years. We played a set together, got great response and decided that maybe we should do another one.” Beyond the bass and beats that you’ll hear in their sets, they’re into retro funk, hip-hop, R&B and all sorts of other genres. By defiantly embracing a diversity of styles, the duo has become an icon of edginess – always on the periphery of what’s fresh, authentic and driven by dance. It’s a combination of eclectic taste and hard work that has earned them a reputation as a force to be reckoned with, and they aren’t slowing down anytime soon. We spoke to Anushka + Agent about how they’re pushing the music they believe in and winning hearts along the way.

KALTBLUT: Tell us about your roots. How did you get your start musically?
Anushka: It was sort of inevitable. I’ve been trying to make music for the last few years but I’m a full-time photographer so it was something I was doing on the side at the time. It started off as fun, we’d play smaller sets or random gigs but people started picking up on that and really enjoying it and we started getting proper bookings from different venues and organizers.
Smita: Both of us have been exposed to the music industry in different ways before this, but performing has given us the confidence to make the music we want to make anyway. We started rolling with it and Anushka + Agent became what it is now. We didn’t start with a plan so it’s been constantly evolving.

KALTBLUT: You guys have been a part of the scene for a long time, but have only been performing for the last year or so. How do you view gigs differently now?
Smita: I’m just so happy that I found a different way to party at my age. Because we work in the industry, it makes you a bit jaded about all of it. You’re not having that much fun at all anymore. I was always contributing to making the party happen, but now that I’m doing it in a musical way – it just brings the excitement back. It’s an amazing feeling.

KALTBLUT: To be a part of a duo, you need to be able to feed off each other’s energy. How would you describe yours?
Smita: We established pretty early on that we have similar but different taste in music. We trust in each other’s taste – and that’s how all successful duos work. Anushka likes heavier sounds, and I do old school pop. We have a balance. When we started, one of us would play a set and then the other one would take over. But the longer we’ve worked together, our flow has improved. We listen to a lot of music together; we create our sets sitting down together. We work much more in tandem now, so one of us mixes while the other curates the set.
Anushka: Two is always better than one!

KALTBLUT: What software do you guys use, and are you really big on hardware?
Anushka: We use Traktor. It’s a software that you hook up to a soundcard that’s a controller, that gets hooked up to the club mixer. But we’re learning more. You need to grow. You can’t have the same show you had last year. We try to do that with our music selection and how we play. But later on it will be with our own music.
Smita: We’re learning more about how to make music. We’ve had friends who have been doing this forever who help us out, but we’re dedicating time to learning new skills. As it goes on, our sets will change. That’s our aspiration right now, to be able to perform a live set.

KALTBLUT: Is there anything you look for when picking a track for your sets?
Anushka: Our sound is more trap and bass right now. We’ve been playing around with it for the last few months. We started with hip-hop and R&B because that’s something that both of us grew up on, but then we brought in our own different sounds that keep it interesting.

KALTBLUT: Who would you dream of working with?
Smita: There’s so many that’s it’s hard to name one. There’s a producer I’ve been obsessed with called Flako – he was actually just playing in India. His live set was so beautiful to watch!
Anushka: There’s also a producer who happens to be a friend of mine, J.Viewz, he’s super talented. He doesn’t make the kind of music we make at all, but if someone approached him to make bass music he could.

KALTBLUT: What is the best impact you could hope to achieve with your music?
Smita: Dance is what drives us. Our sets are very danceable. And that’s what inspired us to start performing, we just wanted to dance and we couldn’t find that kind of music that we wanted to dance to. I think that is also why we’re drawn to bass music and the way that it makes your body move. It’s always girls who come up to us at the end of the set who say: We just wanted to dance, so thank you for that set. Women just want to dance. It’s not like there isn’t space for women to dance, but there isn’t always the kind of music that they want to dance to.
Anushka: The main motive is to make sure your audience is having a good time. When we started off we would just play, but now we really try to read our audience and make sure they’re having fun. Whatever out favourite genres are, we play it all in a very fluid manner from start from finish. You’ll never know what’s coming up next because people haven’t heard of a lot of the music that we play. We try to make it a musical journey.