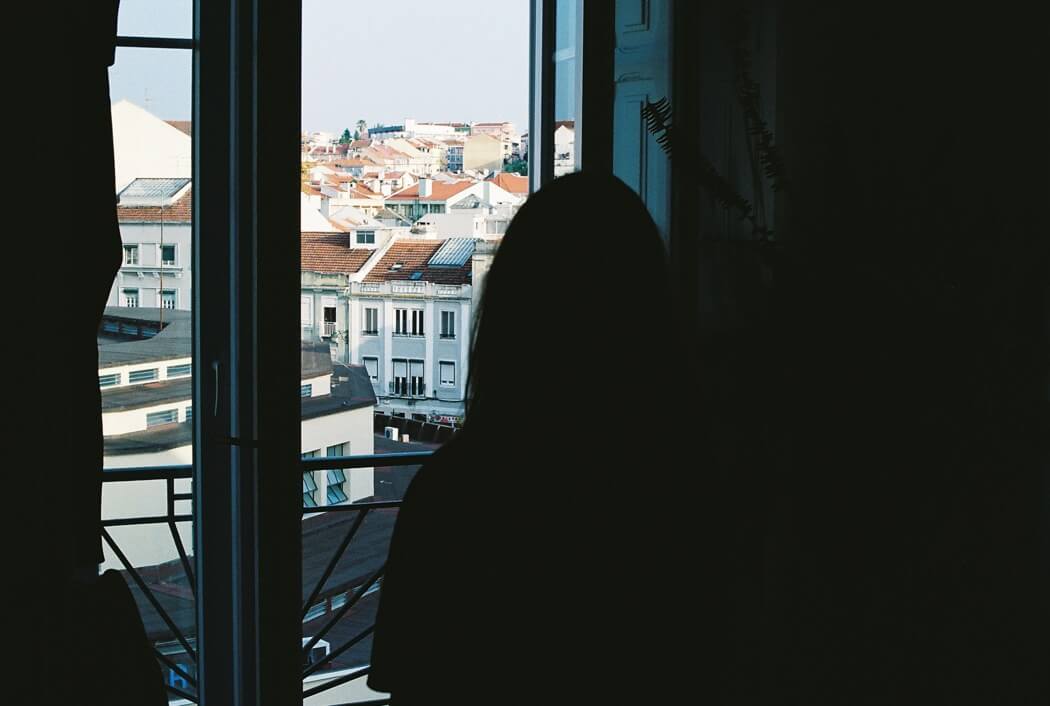 May I introduce you to MENINA – A Short Story by writer and photographer Konstantin Arnold?! A German author living in Lisbon. His new book will be published in Portugal & Germany. It is about Lisbon, literature, love! Translation by Farnaz Riedel. All photos by Konstantin Arnold! www.konstantinarnold.de

Menina – A Story about a Girl

Maria Terreira has soft hands and a nose that looks like a ski ramp into love. Maria Terreira speaks little English and lives in a heavy building with young plaster, which looks old beside the lively main street. The floor of her apartment is covered with cold tiles, and over yellow wallpaper hang cheap paintings whose randomness brings some creativity to her clockwork life – to show that there is more in there. When friends visit on Fridays, they may all apply lipstick in Maria Terreira’s bathroom and smoke in her living room because, after the second bottle of Muscatel, she’s had enough of the subdued tones of her tick-tock life. Maria Terreira can’t part with objects that were given to her before the turn of the millennium. Her rooms are filled with heavy furniture from past lives, making her small apartment even smaller, and preventing Maria Terreira from casually walking away from it all and starting somewhere new without the heavy building and cold tiles weighing down her thoughts. Darkness and decor rule, sometimes frightening her, like experiences that don’t alter a thing. Lead nowhere and have no plausible purpose. Through which you grow neither riper nor stronger, and only reveal their imaginary fatefulness at the end, making us feel significant. Maria Terreira likes to leave room for chance because she loves everything that feels beyond her area of responsibilities. Everything that escapes her control. Men, seasons and the last blouse in just her size. 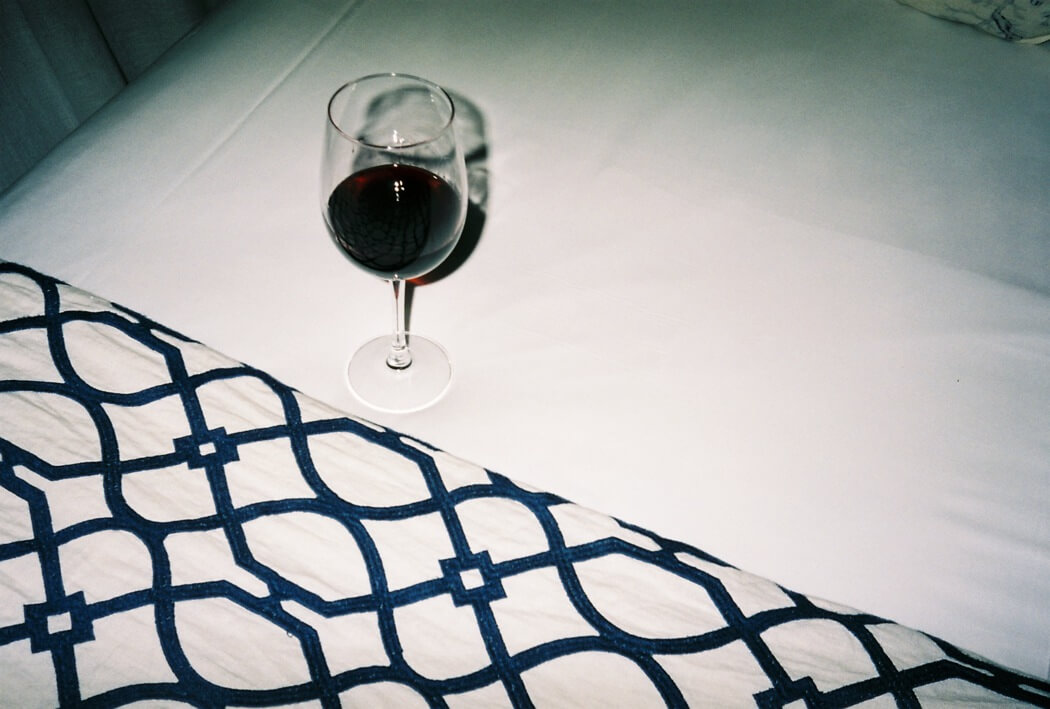 In winter, it rains through the roofs in Lisbon, and you can follow your breath from bed to eternity. You need to dress warmer inside than out, and try to write without losing your fingertips until the damn coldness stops – which isn’t actually cold but feels frostier through the cold tiles, young plaster, yellow walls and cheap paintings. Then it’s finally summer! And it’s so hot that Maria Terreira can only leave the apartment in the afternoon to travel from one place to the next without sweating. On her way, Maria Terreira always walks on the shady side of a sun-drenched life, and at night in her fan-less apartment, she lets go of everything as she turns from her moist stomach to her still-dry back. Since Maria Terreira spends most of her time outdoors, most Portuguese apartments resemble each other in their modest interiors, and distinguish themselves in their vain exteriors. Maria Terreira usually sits in small city squares that are too small for tourists, and dwells on the overlooked trivialities of her impressions. 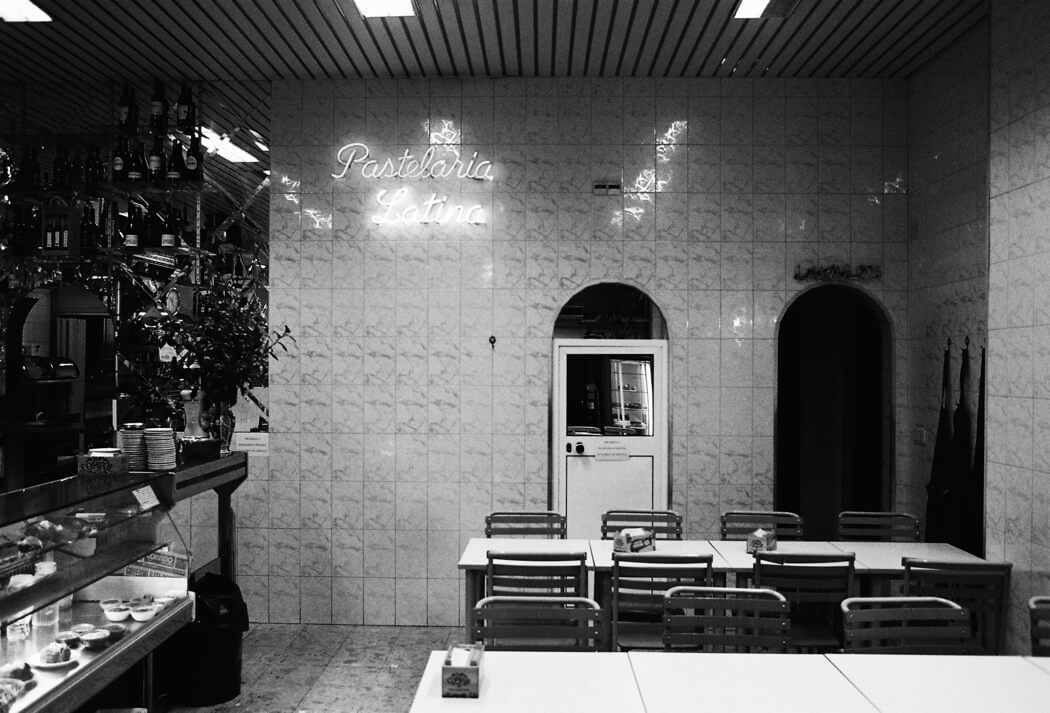 When Maria Terreira walks past a vacant house, and gazes at its wrinkled façade up to the last balcony, she asks herself what was done, said and thought in each single apartment. And how these three words differ in their truths from each other. Maria Terreira loves to walk down a street just before the shops close, so she can glance at the freedom-filled faces of the shopkeepers who pursue a regularity, which seems so tedious and endless, that it scares her. Maria Terreira feels the same fear when she thinks of Porto and the law studies financed by her father, or of experiences that don’t change anything at all. To distract herself, she begins to count every restaurant she walks past – but not the kebab shops, because Maria Terreira thinks kebab shops are stupid. Ever since she moved to Lisbon, friends who live in her hometown say that Maria Terreira is no longer the same. She thinks that’s dumb, because the old Maria Terreira was younger and no longer wants to live as a world without Muscatel would expect of her. This brings her count to three true friends and 87 restaurants – minus kebab shops. And to an experience whose fatefulness reveals itself only at the end: to me. 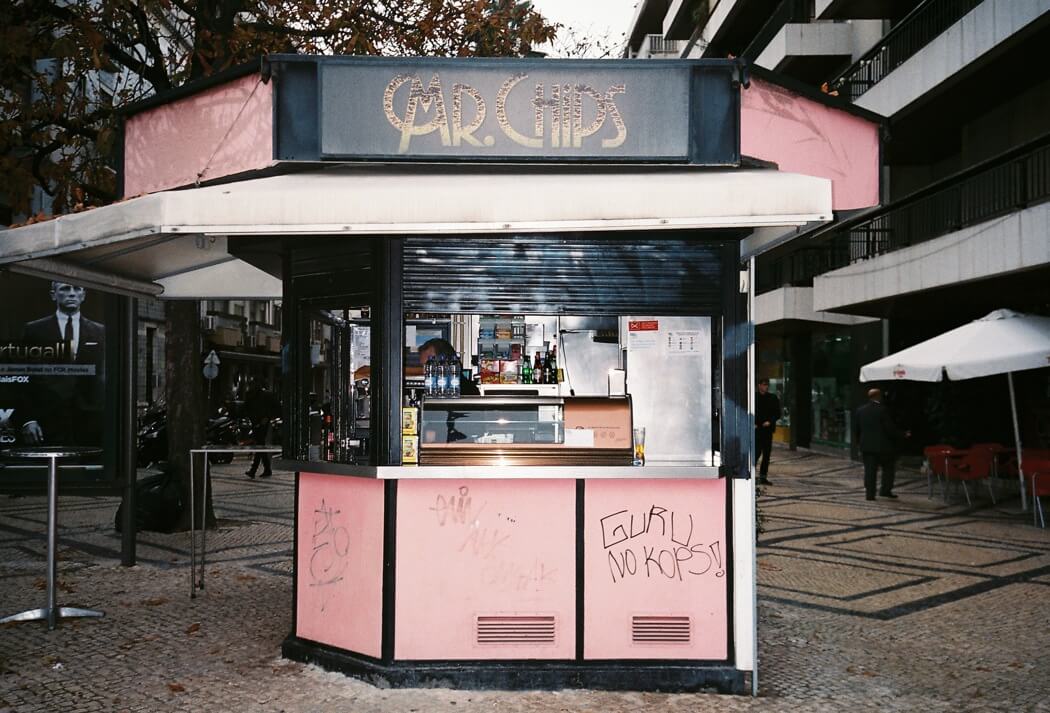 Maria Terreira met me four days ago at a masquerade ball. The Portuguese love masks and balls, because for a 30-euro entrance fee, they can rise from the ashes like a phoenix. Of course, you don’t find the love of your life this way, because everyone has a mask and something to prove – as in real life. There, in real life, where nothing impresses like beauty, and at 27 my balls still have the say and judge the true worth of a character. There, where all have always wanted nothing but to be loved – but nowadays hope that it takes some time before someone comes along, because the emptiness of our existence can then, under certain conditions, be filled with some sense. Everything can wait! The Portuguese are always late anyway, because of traffic and because of the weather. After all, they have good excuses that we don’t have in Germany. Better late, styled and serene than just in time and spotted with sweat. For the masquerade, it didn’t matter; everything was allowed and I was in a black polo neck. Wearing it, I feel like a brain-wracking intelligence-boxer, a poor author with a rich heritage. But in truth, I just look like a football player wearing a black polo neck. Like someone who doesn’t need to think, because the pullover does it for you. Somehow also a disguise. Really! Have you ever flipped through the business section of the Frankfurter Allgemeine in a black polo neck? Have you ever crossed your legs as far as they’ll go, drunk red wine from large glasses, eaten olives and argued about the value of currency with hard cheese in your mouth in a black polo neck? Maria Terreira says one can never think enough, but please not in a black polo! At least not without laughing at yourself. Because when balance and its opposites are lost, things can quickly become too heady. You lose the fun of adventure, begin to write about seagulls and trees, and experience nothing worth putting into words. 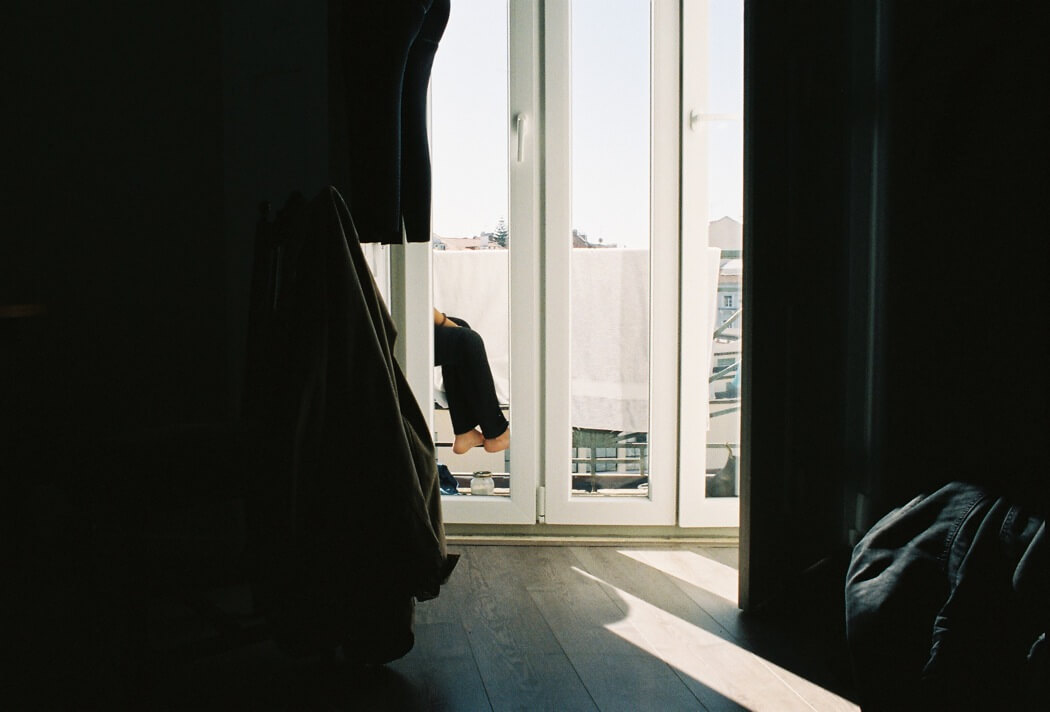 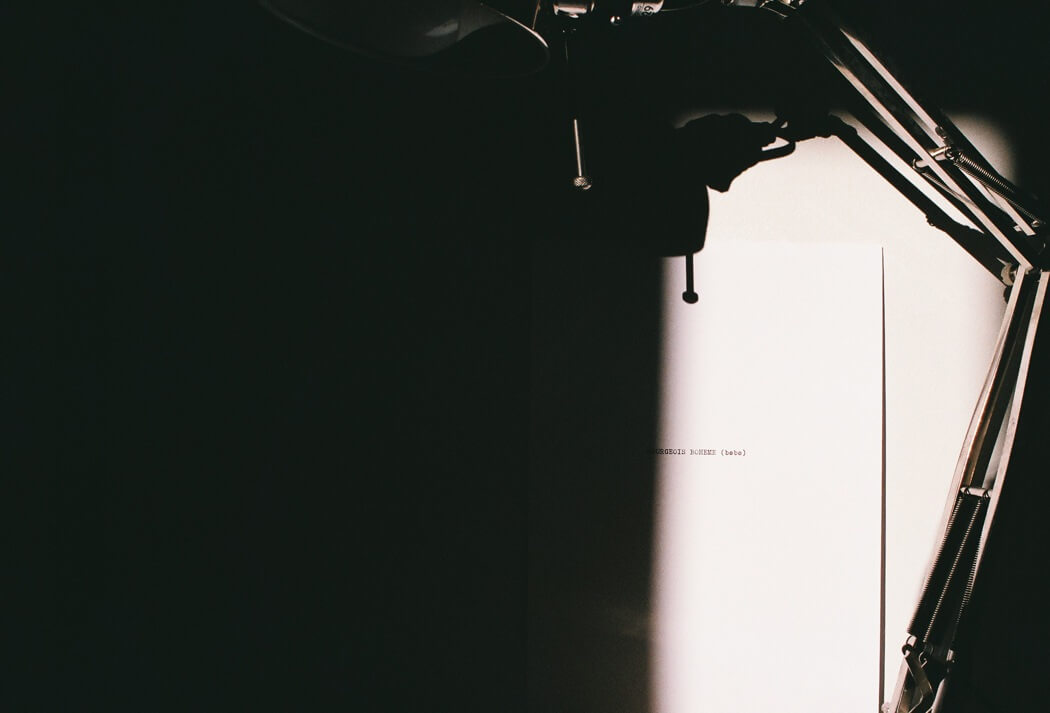 But we are corresponding live from Maria Terreira’s bedroom, where there’s a large, ripe bed that can be mounted from three sides. Despite all the furniture, we spent the first night on an unfolded folding sofa. So tight that we were one, so tight that a piece of cloth (like a black polo neck) felt like a long-distance relationship over a bad Skype connection with time lag. Underwear, like a prison, and socks, like strangled sacks from which nothing takes root. From this day forth, we planned to spend every day together, and not let the matter sink into singularity. After deducting two consecutive days of proud waiting, there remain only 20 more days for Maria Terreira and me before she moves back to her old life. Back to her family, her fears and her horses. Maria Terreira loves horses, and I love girls who love horses. Before going to bed after a long night, Maria Terreira likes to eat, preferably a bifana, a simple sandwich made of meat and Portuguese soul, which I gladly partake of before lying beside her. Maria Terreira loves late nights and I love her long mornings. She loves that I’m tall, and I, that she’s small. She knows answers for which I pose the right questions, and we appreciate one other’s bad and not just good sides. With each passing day, we sense that we’re not who we take each other to be. But we enjoy it anyway, because the finite days supply the required magic and closure, so that we don’t have to seek them ourselves. We have to pull through all by ourselves, like the greatest names in history. For this is a story of locations and their connections. Single shreds that suddenly unite and broaden the horizon by shrinking. Becoming less, no longer standing alone, making you choose more cautiously, the more of them you see. 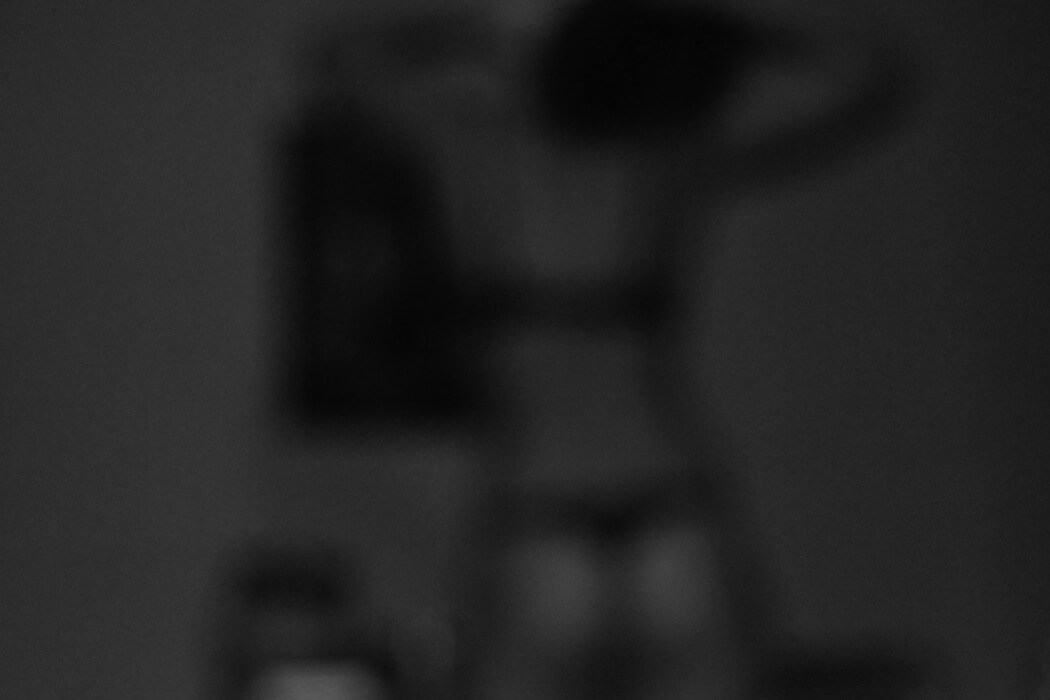 On the morning of her departure, Maria Terreira asked me to join her. To the door, to the train station, to Porto and to the end of her life. I also wanted to want that, but I didn’t even make it to the station because the metro rides right in front of her house. Maria Terreira remained monosyllabic most of the time, but in her farewell, she said to me in Portuguese that she had really enjoyed the time with me (I think), and in English that my heart isn’t blind but wears mirrored sunglasses, which look cool but are only there to protect from the self and the sun. But she couldn’t take them off me. When the Blue Line drove her out of my life, it became clear that she was gone like the desire she had come with. I felt miserable on my short trip home. As the door, which Maria Terreira had just opened, shut behind me, I didn’t need any of my twelve morning espressos to feel alive. I asked myself if I wanted a life that’s dependent on overly human feelings, or rather to live in freedom that feels like a greenhouse in which identical red strawberries sprout. Should I relinquish my imagination for reality? Together with her, I broke rules that I had specially set myself. With her, I wasn’t only interested in words, but also their roots. Without her, I am pervaded by thoughts and emotions that I will share with no one because of my colossal ego and cool sunglasses. Maria Terreira least of all. Because without her I have no chance against the rules that I specially set myself. Nietzsche or Sartre said that love demands that you surrender yourself to the other to flourish and decay. To get naked, and if that’s not enough, then only because you weren’t reached (he didn’t say that!). 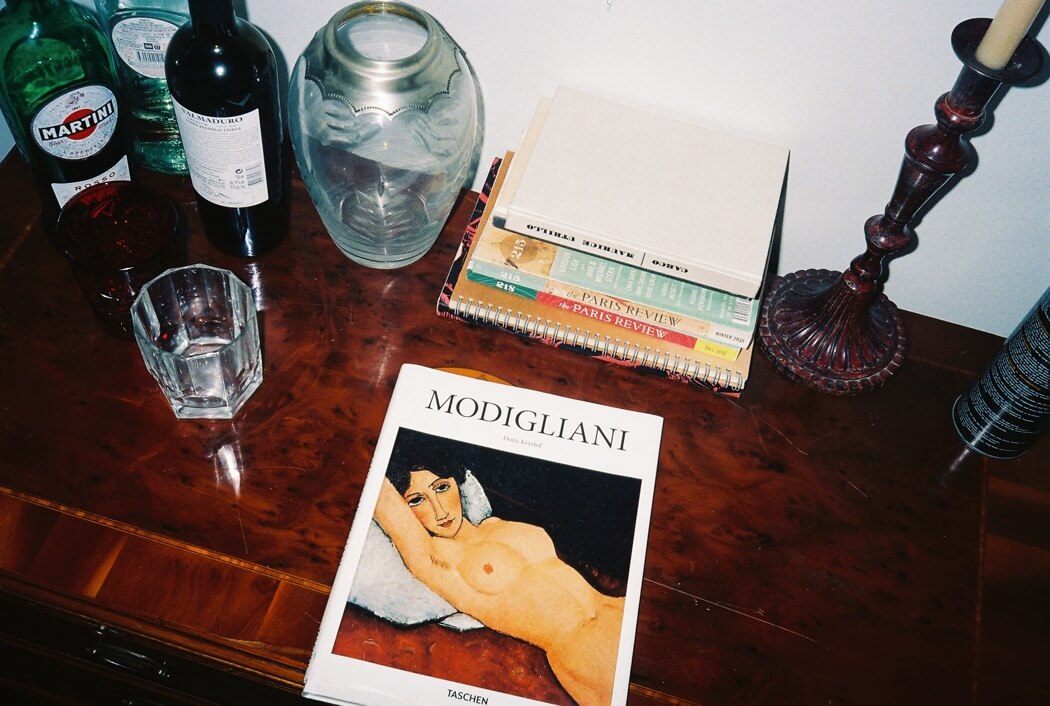 Now, I miss Maria Terreira the most when I don’t think of her. She would have been a great girl if I hadn’t compared her to who I believed her to be. Perhaps the best I ever met outside my rose-petal-excreting imagination. A pastel de nata that doesn’t taste half as good in the best shop in town as it does in a café from which you’d never expect it. These things scare me sometimes, because Maria Terreira is beautiful from inside and out. Different, with each of her words. The one, if there were no others in the world. More than enough, if only one were enough. Can one have it all? Because I already have a broken car, a broken roof and cool sunglasses through which broken cars and broken roofs don’t matter. It’s all relative! Everything is cool and a question of reflection. Anyway, it’s 11 p.m., so for Maria Terreira and her new boyfriend it’s bedtime on Mondays and far too early to party on Fridays. I don’t want to say much about her new boyfriend, because everything I’d say would be awful. But in my imagination, he has the biggest dick, the smartest brain and tells the most delightful jokes. 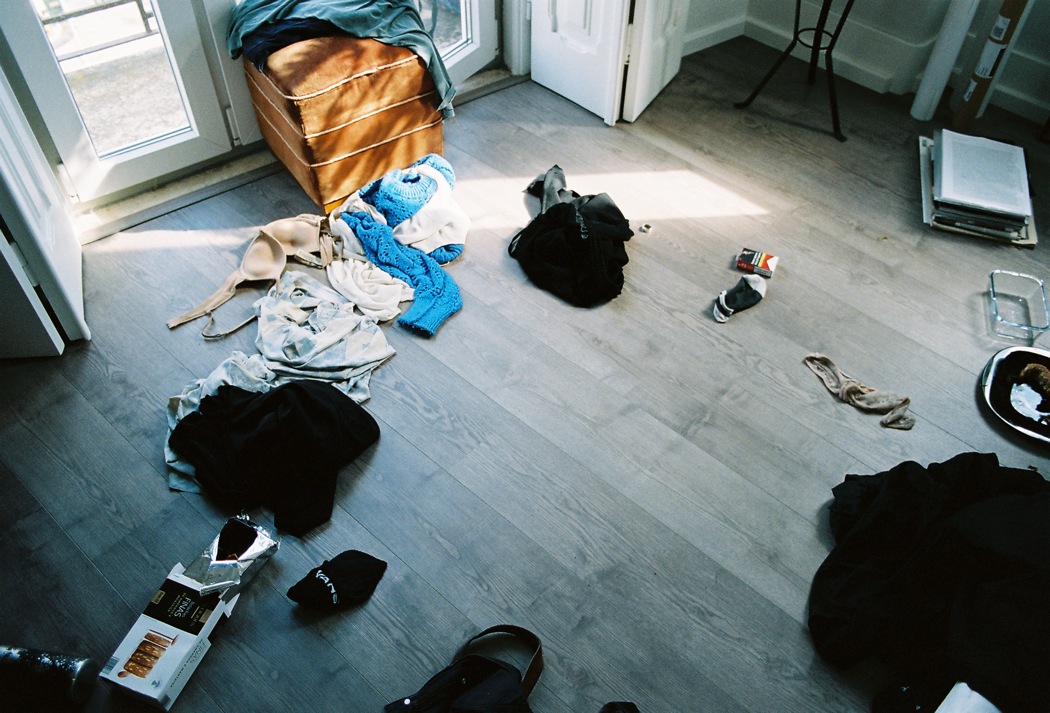