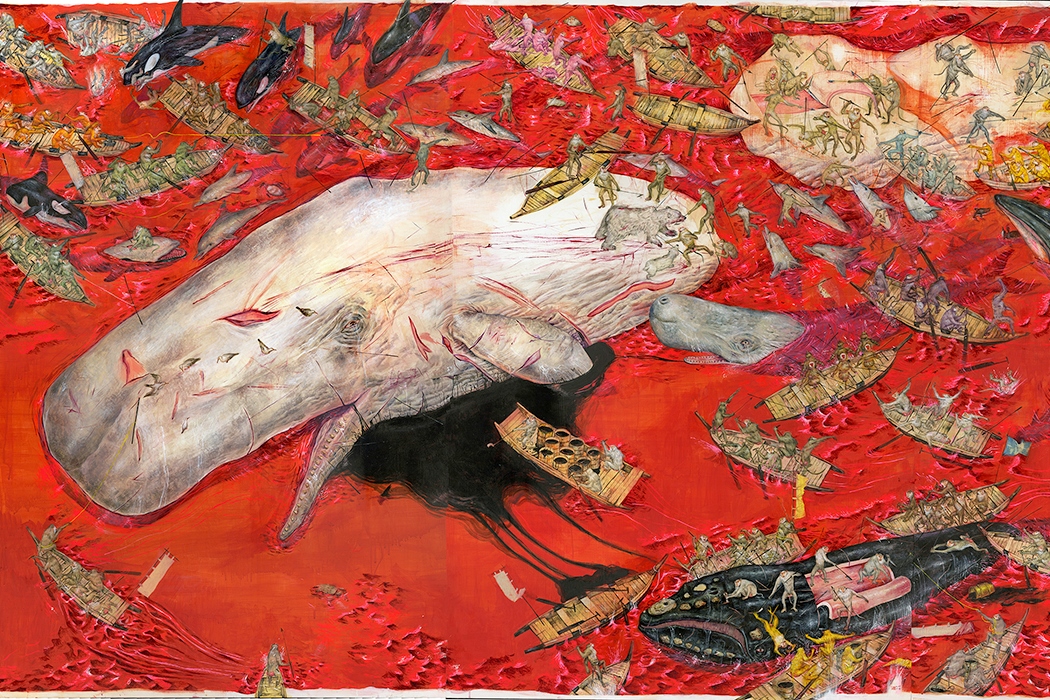 Mu Pan’s work is ﬁlled with monstrous creatures, mythological or literary ﬁgures all taking part in some epic battle. Mu Pan loves epic movies and he even teaches a course about epic drawing at the Illustration Program at the School of Visual Arts in New York. To him, war is a beautiful thing, it creates great characters and it also writes history. You got to be a great artist in order to ﬁght a war as a commander. There is so much art you have to master in warfare such as formation, ﬁnance, time, strategy, geography, force, the art of brainwashing for loyalty and the sense of duty. It takes a great amount of patience and it also requires a high level of charisma and intelligence. “Whether it is for invading or defending, to me it’s beautiful to see how one person can unite all the individual strength to become one great power”, he claims. Every monster he draws is actually a self-portrait in his (not so much) made-up world. 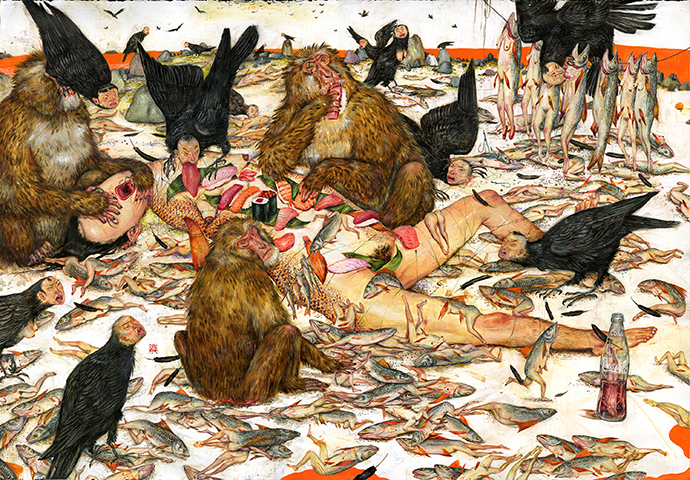 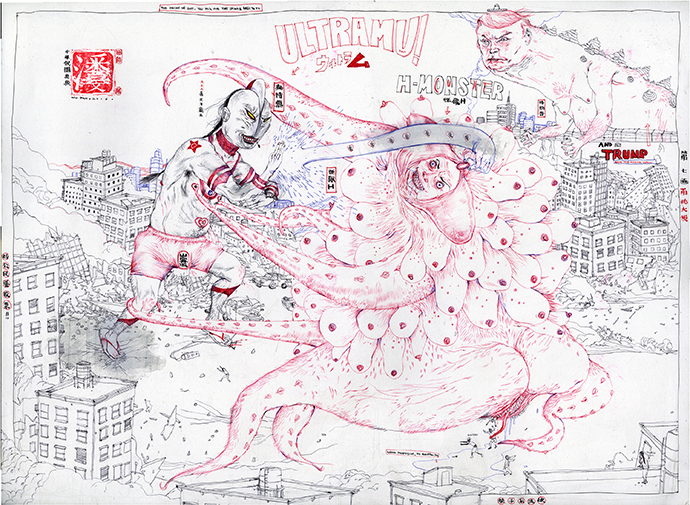 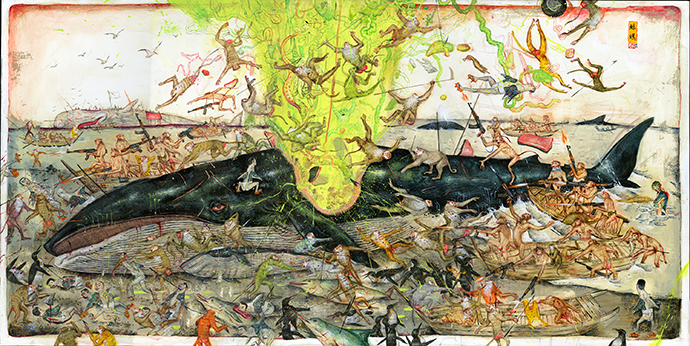 Even though he is an American citizen, (he came to New York when he was 21 so he was never really accepted as an American) he still doesn’t feel like having a country, a home. “My family came from mainland China to Taiwan with the R.O.C. government in 1949. I was born and raised in Taiwan until I was 20, but I always consider myself Chinese. When in Taiwan, I was never a so-called Taiwanese-because of my family background-and of course, I do not have the citizenship of the People Republic of China. Maybe one day, if China and Taiwan are uniﬁed again, I will totally embrace that and shout out loud to the world that I’m a Chinese.” Part of his art is “Shit Myth and Shit History of China” where irony, anger and humour are displayed. It’s an homage, a dedication to people who sacriﬁced their lives for the Republic of China, to his people who are left in Taiwan, struggling under the conceptual political strategy from the current Taiwanese Government since 1949. Either as a propaganda soldier-artist of the Republic of China or as an art student he couldn’t stand following rules, classic formats and pretentious techniques. He uses his ideas like a gunshot, fast and maverick so a sketchbook and a pen are enough. If the story intrigues him, it just comes out naturally without much of an eﬀort. 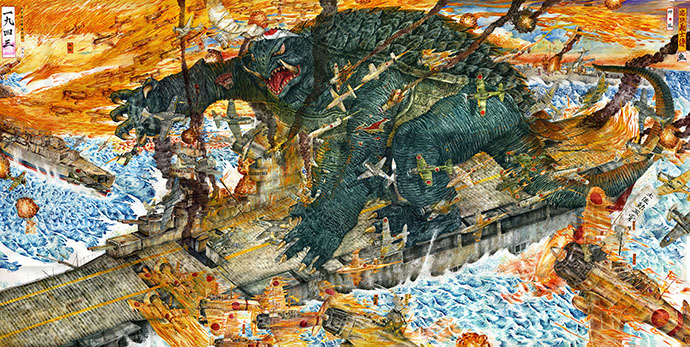 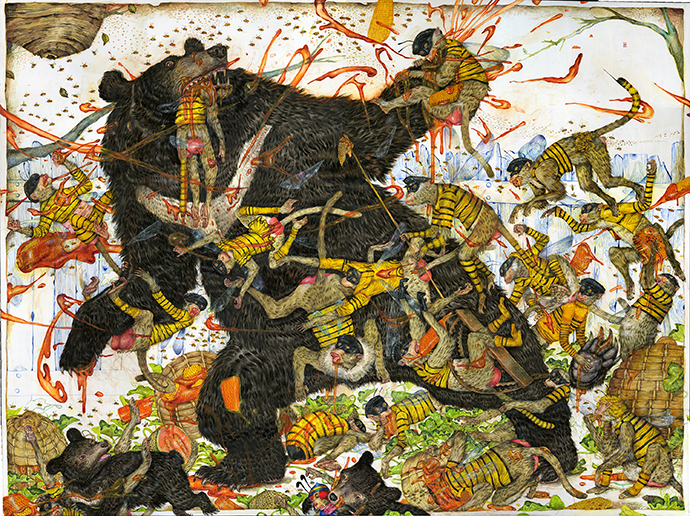 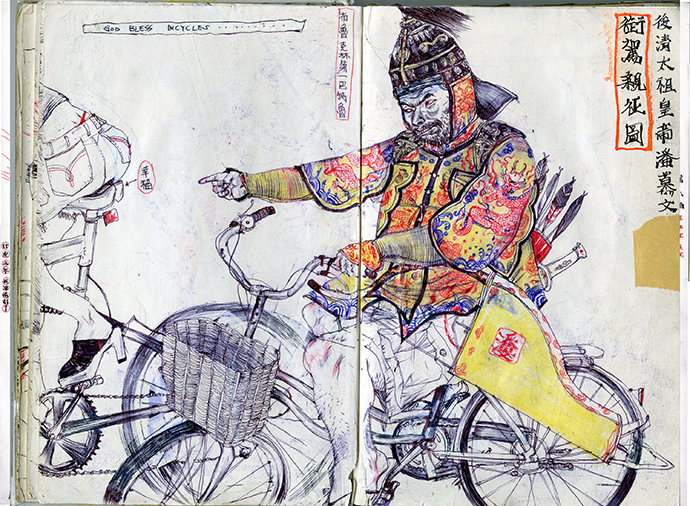 There is a strange calmness, a peculiar comfort when one looks at his sketches or paintings and that’s what’s important for Mu Pan-not the violence, not the grandly poetic bloodbath, not the truncation of soldiers, leviathans or even nations. Pan admits he owes a great deal to Tarantino and Looney Tunes as they established a comic shade at (their) violence-which is what he is trying to do as well. “I worship the strength of man and animals. I dream having the dominating power to rule and destroy, create fear to my enemies. Of course, that’s impossible, no one can have this kind of power in today’s world. So, I created my own world for myself ﬁlled with my images. I can be whatever I wanna be, I can eat whoever I hate.” 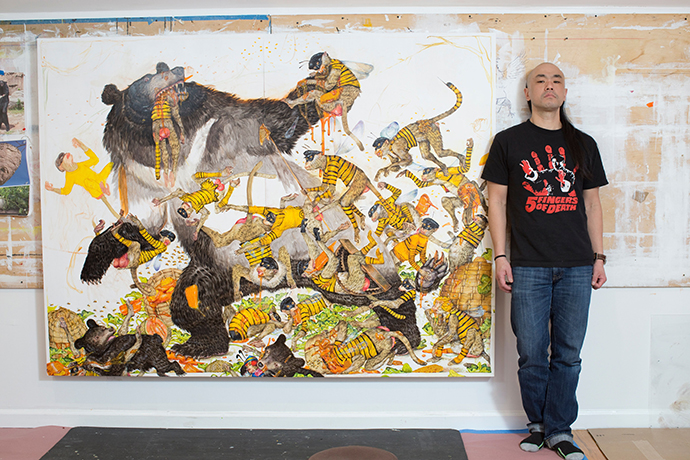 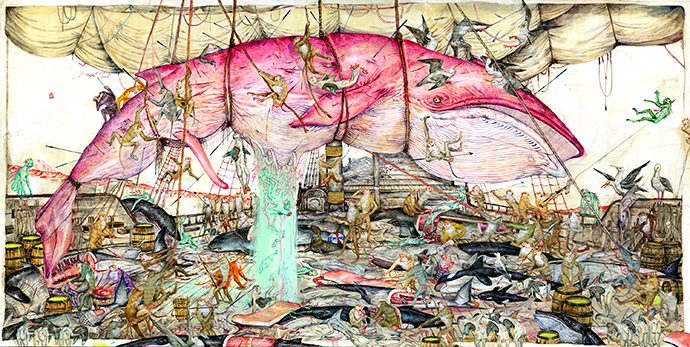 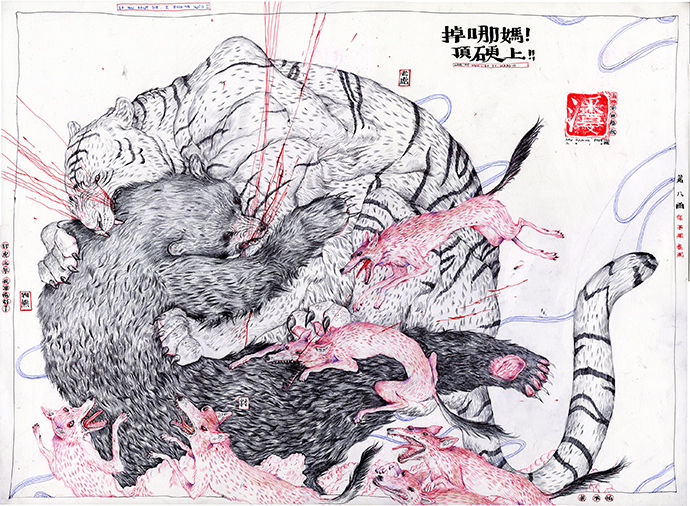 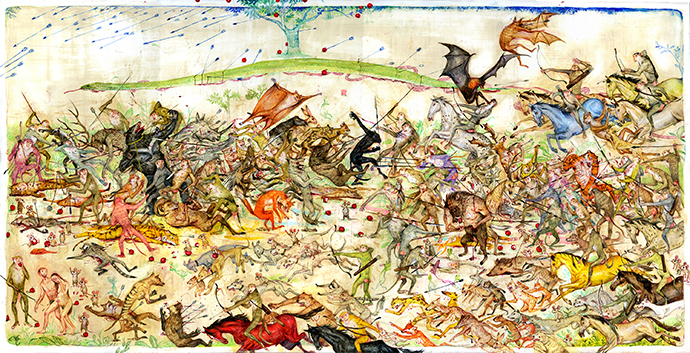