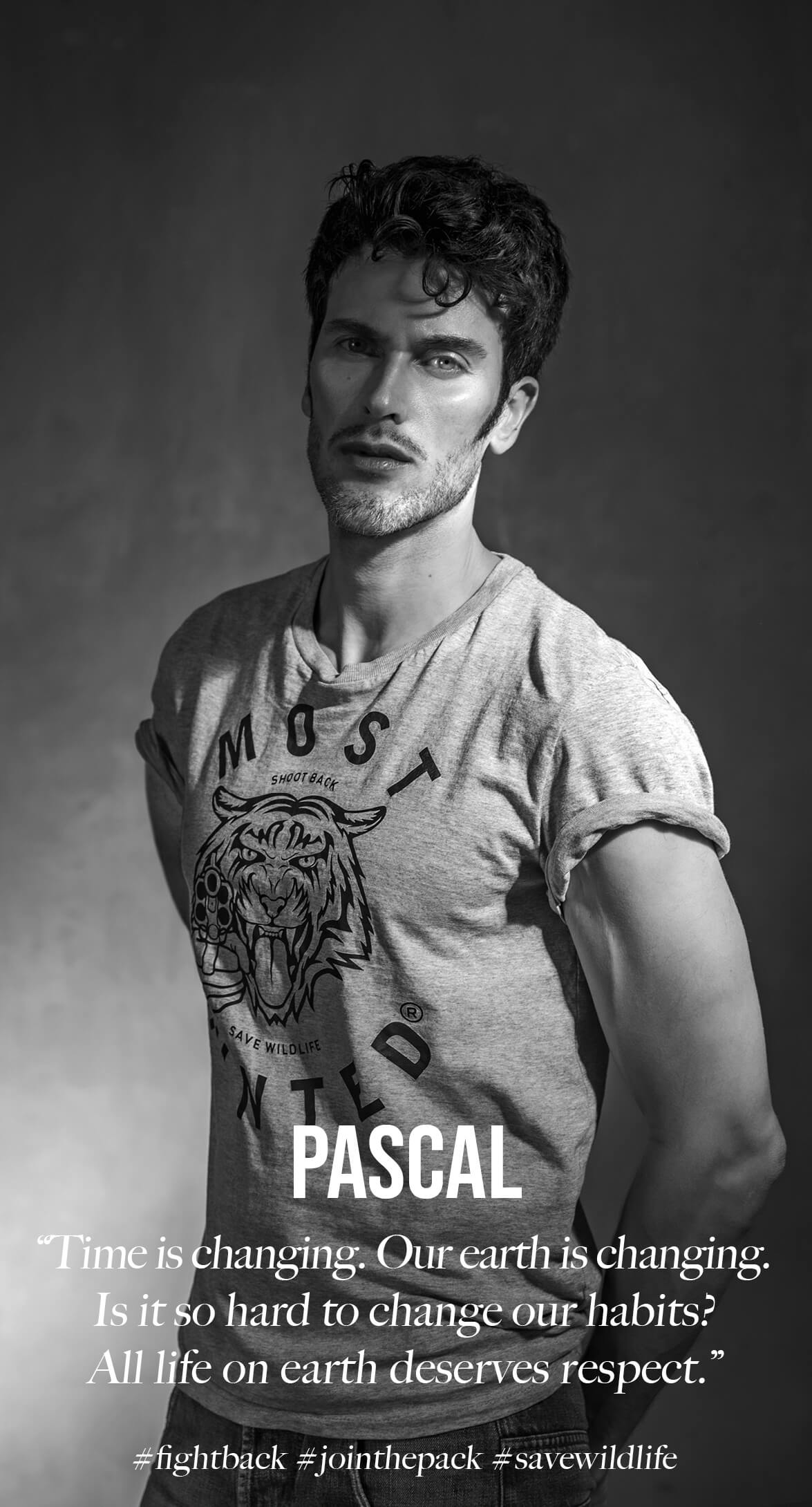 MOST HUNTED STORIES – AN INTERVIEW WITH AMBASSADOR PASCAL BIER

The MOST HUNTED animal pack is growing one person at a time. With fans who are wearing or using our beastly good items, sharing our message or taking it a step further. This column is about the people who help us raise awareness and funds to save wildlife with their own talent. We are privileged to know the multi gifted Pascal Bier. Find out more about his MOST HUNTED story.
www.mosthunted.com // www.instagram.com/pascal.bier 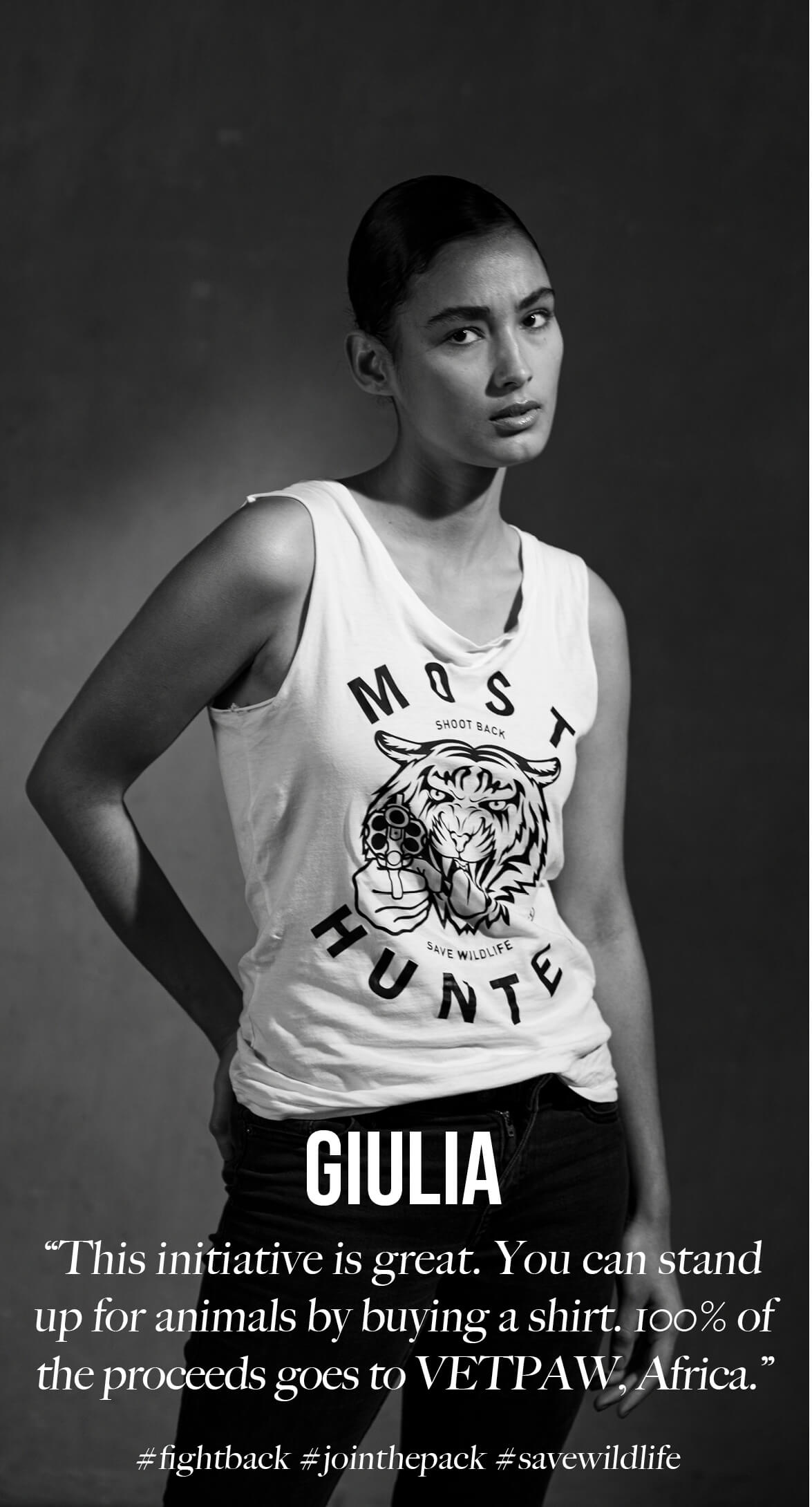 WHO IS PASCAL BIER?
Hmmm… it’s hard to describe yourself, but I hope I am a caring and a creative person. Right now I want to reflect my ‘caring’ side by taking some things more serious through my creativity.

HOW DID YOU BECAME A MODEL?
I was discovered on the streets and in a shop where I was fitting some clothes. At that time I had no time for a modeling career because I was a full time art director. Those two were hard to combine. After I quit my job I decided to give modeling a chance and got signed in when I was at an agency with a friend of mine.

WHEN DID YOU DECIDE TO BECOME A PHOTOGRAPHER?
When I was an art director in the advertising industry I already knew I wanted to expand my creativity. I decided to buy a camera and started working on some free projects to explore and learn photography. Every time I had to travel abroad for my modeling work I took my camera with me. Because I was staying in model apartments I connected easily with models and agencies. This gave me the chance to shoot several models and release the photographer in me. 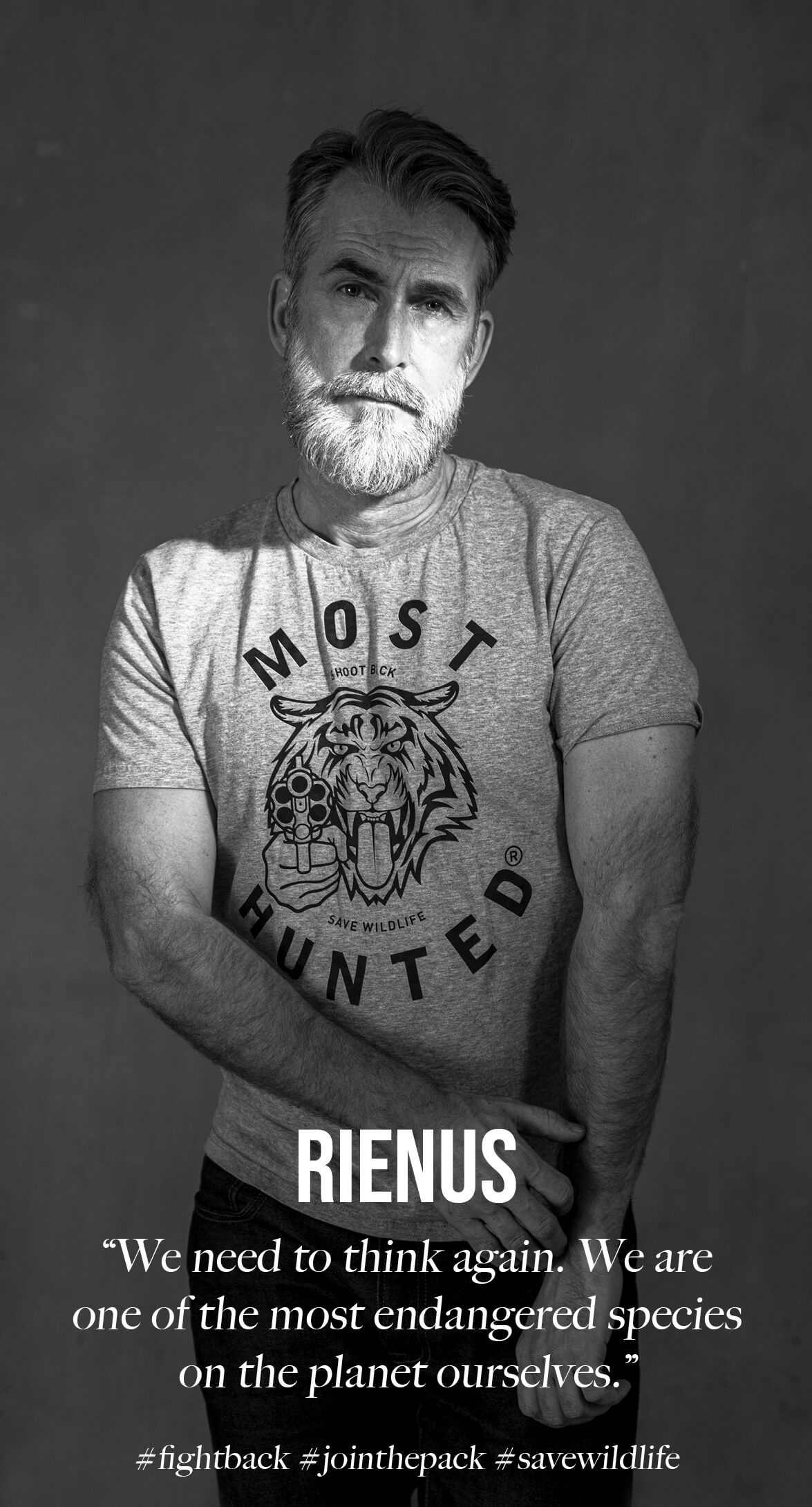 WHAT IS YOUR FAVORITE PASTIME? (Why?)
I workout a lot, but that’s also part of my job. Spending time outside in the city and in nature is my favorite thing to do. Exploring new cities and areas is so nice and gives me lots of inspiration. Besides that I love animals a lot and I’m thinking to volunteer to help animals.

WHY DID YOU CHOOSE TO SUPPORT MOST HUNTED?
I wanted to do something more than just creating a nice picture. Share a message. To share a bit more of my personal opinion about the world we live in right now. And it doesn’t get more personal than creating this content for MOST HUNTED. Their platform has all the elements I was looking for. I wanted to make a statement and do something striking. 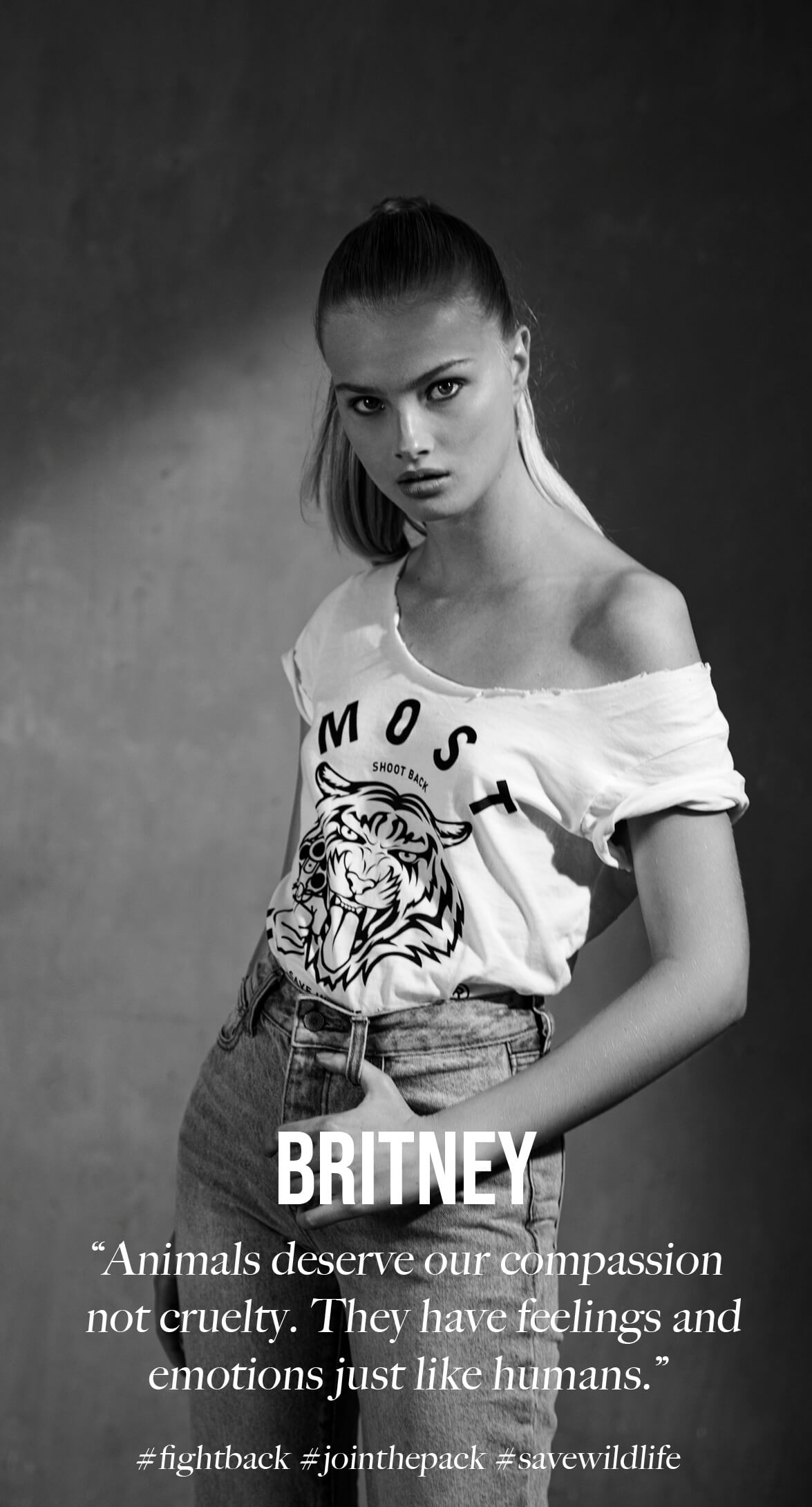 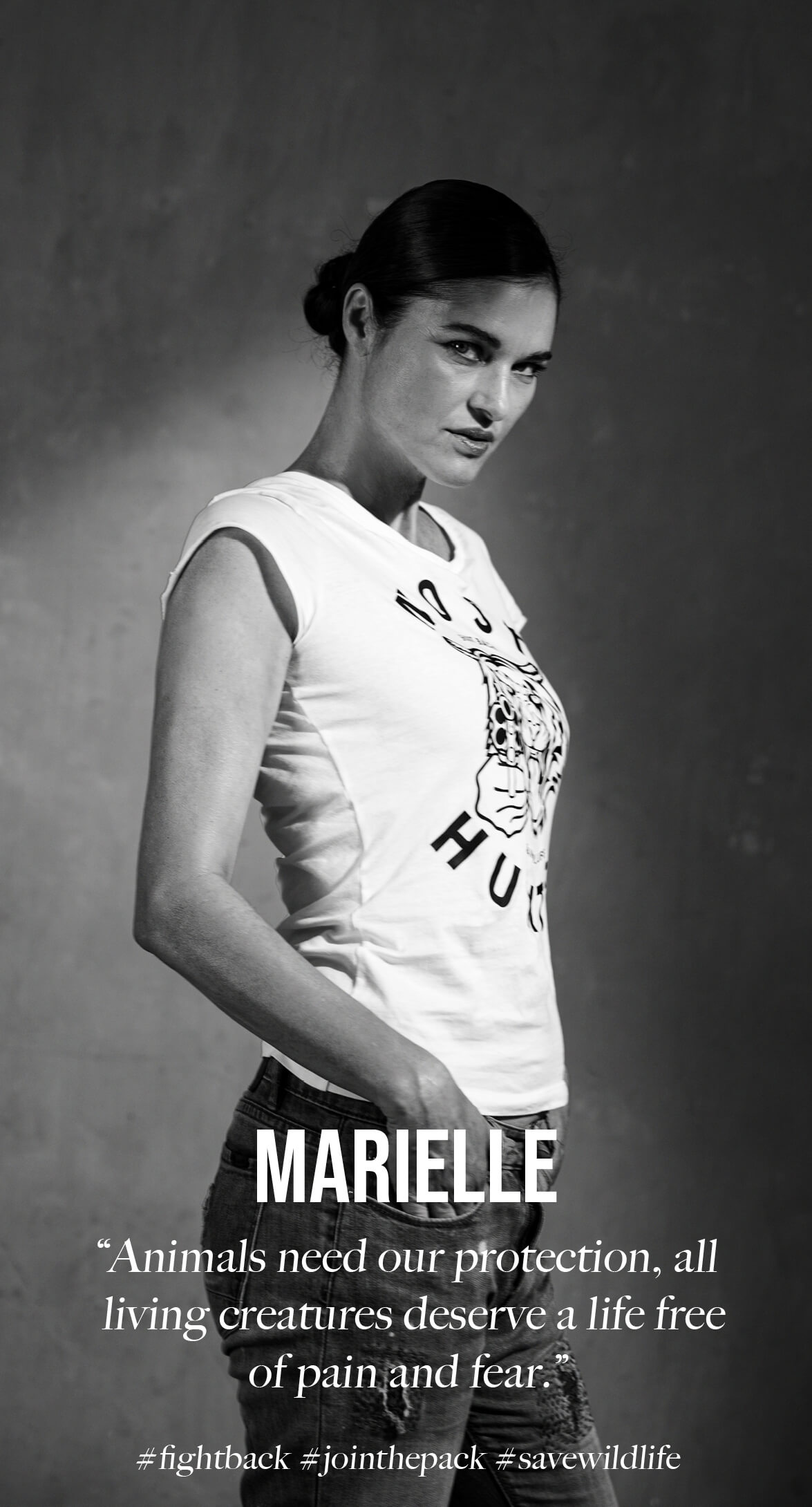 The whole idea was translated on my personal account, because I wanted to share my vision on the wildlife situation as a model and photographer. While I was busy creating the story and images MOST HUNTED decided to donate 100% of the proceeds of the white and grey T-shirts used in my campaign to save wildlife. I think what MOST HUNTED is trying to do and achieve is very inspiring. In turn I try to reach out and inspire other people. Even if it is just one person I can affect I would be happy. But the more the merrier of course.

WHAT IS YOUR FAVORITE ANIMAL? (Why?)
I love cats and my zion is Lion. But to be honest I love almost all of the animals and respect them in their own way.

WHAT IS THE BEST LESSON YOU’VE LEARNED IN LIFE?
Follow your heart and create goals to achieve. The goal is nice to have, but the way to achieve it is more interesting and makes you a richer person. Respect animals and nature. They can live perfectly without us, but we are doomed the other way around. 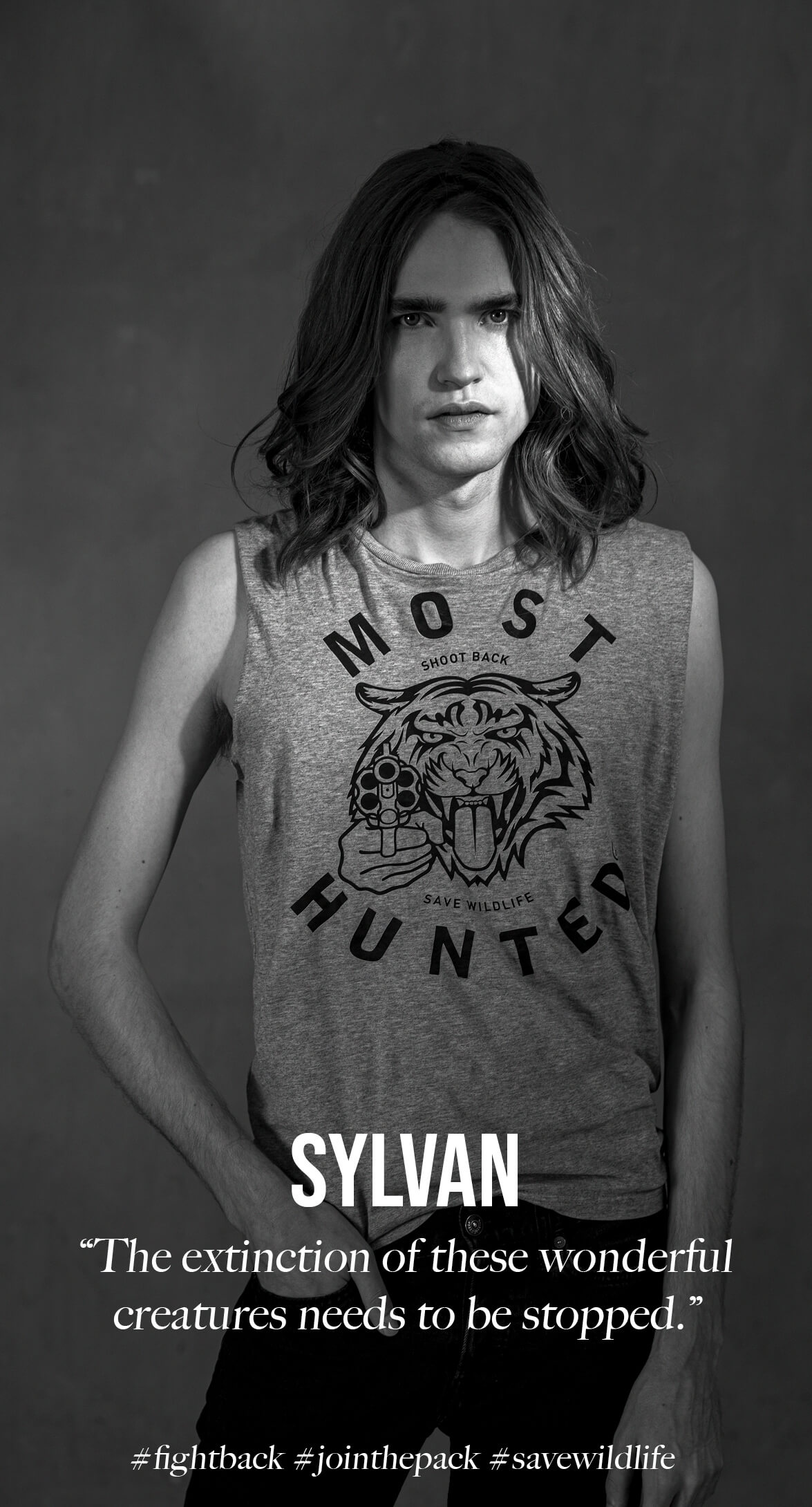 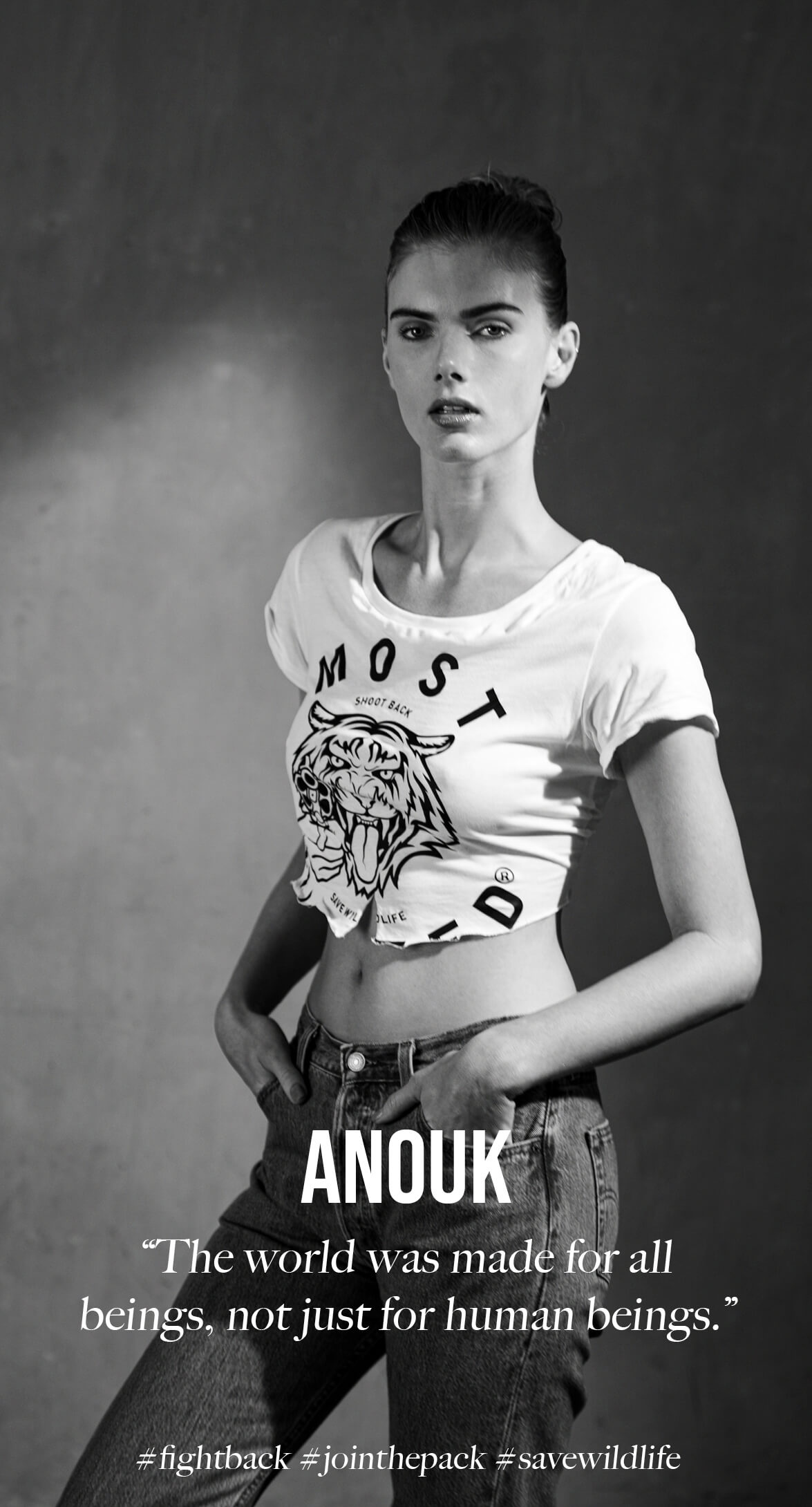 CAN YOU TELL US SOMETHING WE DO NOT KNOW ABOUT YOU YET?
Well, some people think my work is only about looks, beautiful images and glamour life. But I can tell you I am not living the glamour life.

I enjoy my workout routines and take care of my body and health, which is important for me personally and my work. But more important is your mental health. All needs to be in balance.

Most of the time my job is hard work and looks cool when you see the finished images, but it has nothing to do with glamour life and I don’t like to express myself the way most of the influencers do (with a fake ‘happy perfect life’). Certainly last years I kept thinking ‘I don’t want to put myself out there that way’ and found some other things which were more true to my heart. Caring for animals in combination with some fashion and a fund. I am so glad that I can express myself in this project as a person, model and photographer and use my creativity, energy and channels to let me speak out this way.
I am a true animal and nature lover and I wish I could do everything to make the animal killings stop. Change peoples minds about our earth, nature and it’s living creatures. Without being an extreme activist, but someone who people can relate to and who can open their eyes. I wish we would have more respect in general for other people, animals and our planet. This starts with yourself. I started with myself.

WHAT IS YOUR WILDLIFE SAVING ADVICE TO ALL OF US?
If we all respect living creatures a bit more and protect them instead of attacking them the world would be a better place. 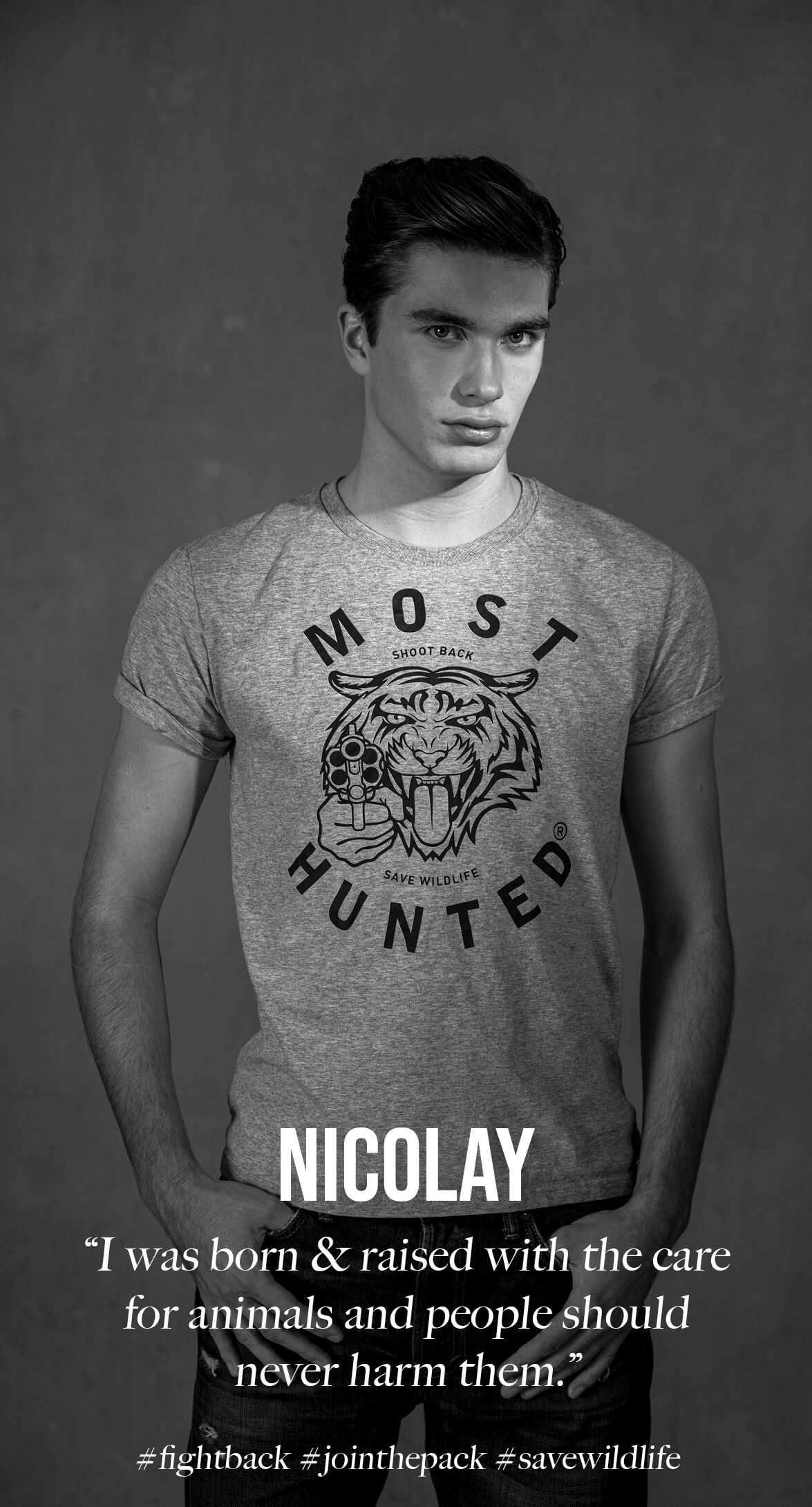 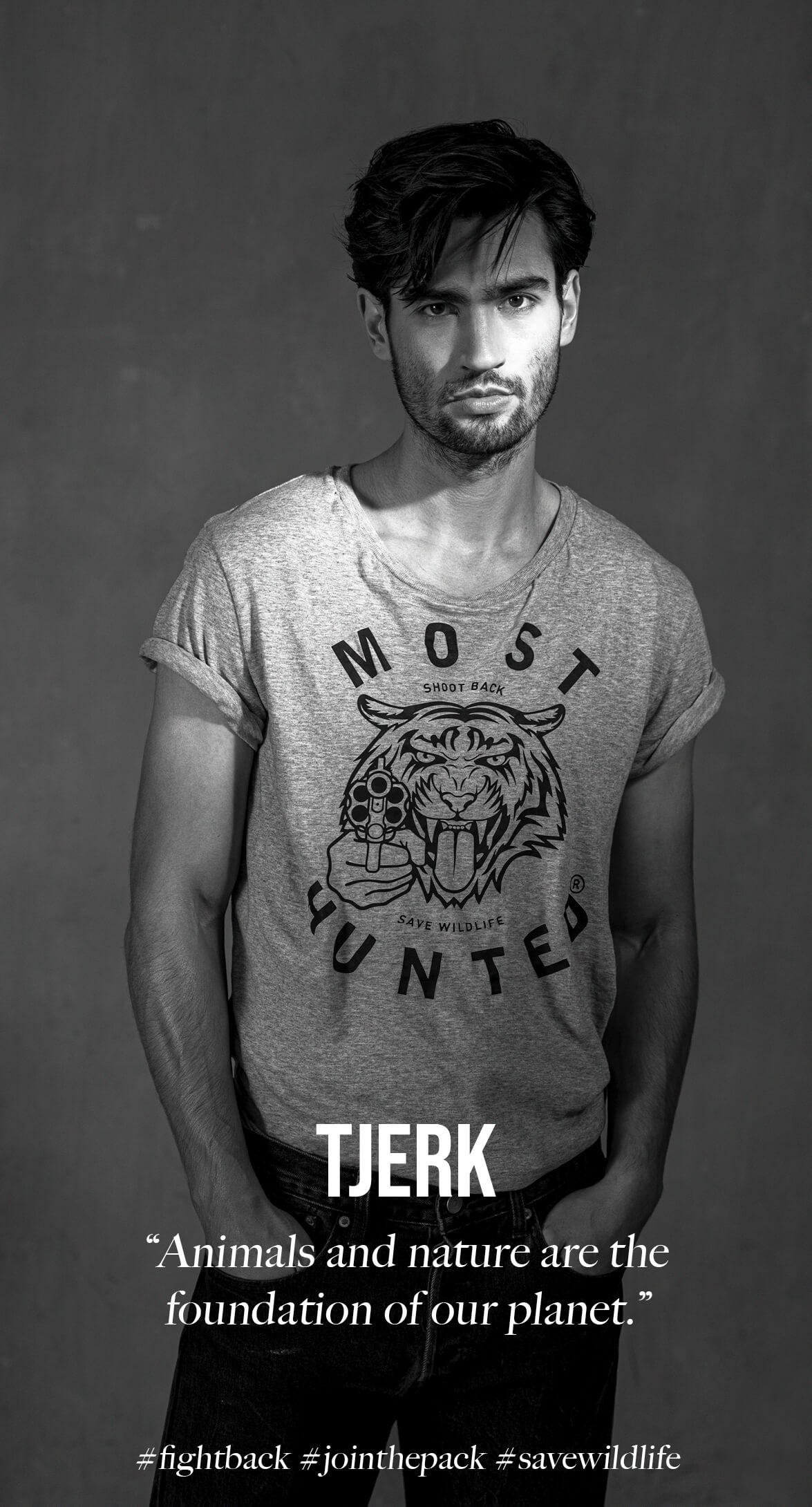 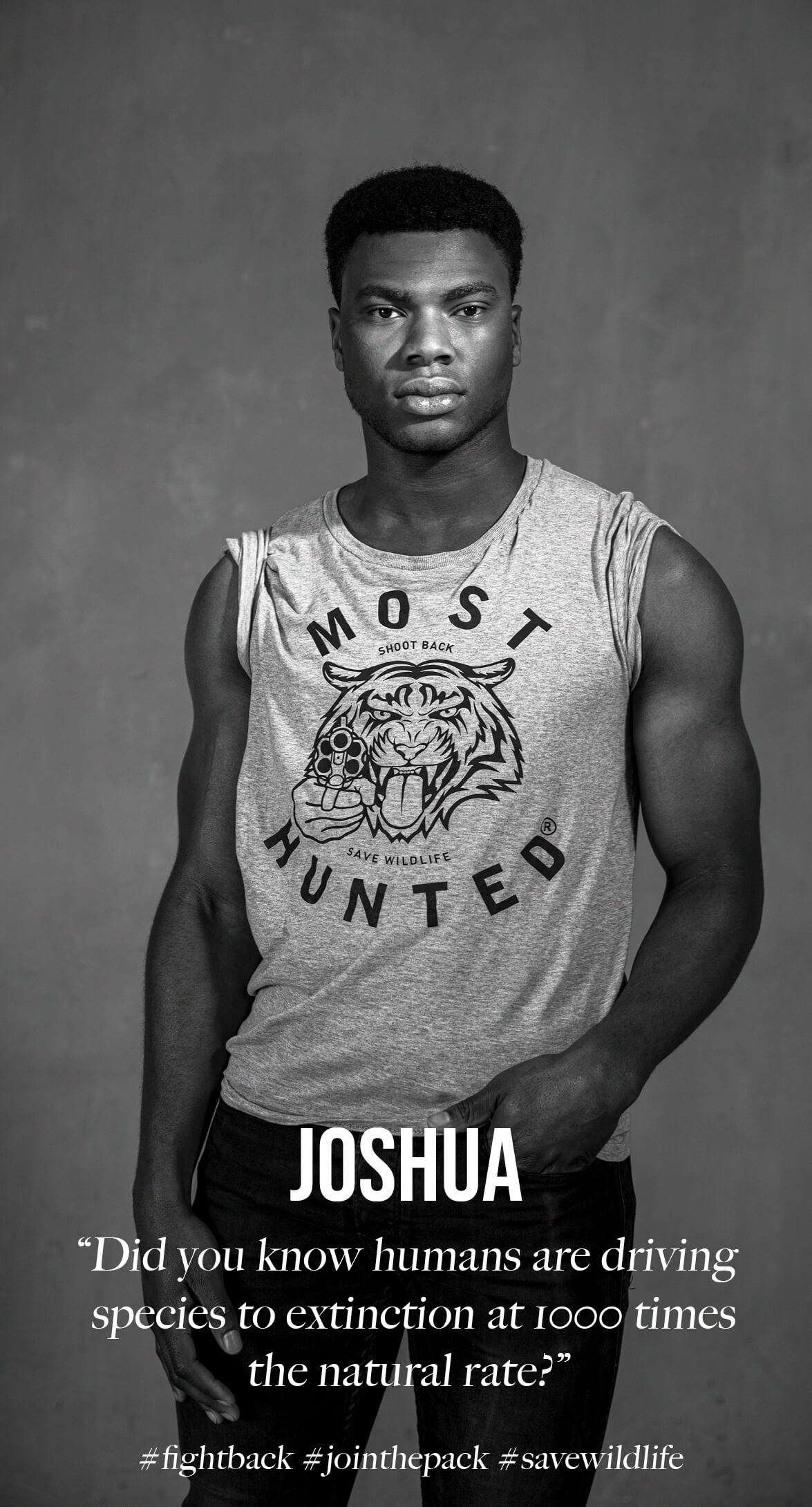 Did you know humans are driving species to extinction at 1000 times the natural rate?

Did you know poaching is still a growing business due to its high-profits and relatively
low-risks?

Did you know less than 4000 tigers remain in the wild today? And there were more than 100,000 tigers only a century ago?

Did you know only 4% of the tigers remain in the wild today compared to the population just a century ago?

Did you know even now tigers are protected the illegal hunting continues?

Did you know now there are so little tigers left in the wild that poachers go after all other big cats?

Did you know only 30% of the rhinos remain in the wild today compared to the population just 40 years ago?

Did you know despite rhinos are critically endangered that poachers are still after their horns?

Did you know every 8 hours a rhino is poached for its horn?

Did you know for the past 5 years African rhinos have been poached at a rate of 3 per day?

Did you know the number of lions has fallen by 40% in the last 20 years?

Did you know cubs are bred to hunt once they’re adult lions?

Did you know cubs are bred for tourism and once they’re adult lions for trophy hunting?

Did you know despite pandas mainly live in reserves that they are still trapped by poachers?

Did you know despite pandas mainly live in reserves there are 25% less pandas today compared to the population only 45 years ago?

Did you know the polar bear is about to go extinct, not only caused by global warming, but by the immediate threat of hunting?

Did you know each year 20,000 elephants are killed for their ivory tusks?

Did you know every day 100 elephants are killed for their ivory tusks?

Did you know every 15 minutes an elephant is killed for its ivory tusks?

Did you know about 90% of the African elephants have been wiped out last century mainly due to the ivory trade?

Join the pack. Fight back. Save wildlife.

Did you know the black crested macaque is threatened with extinction because people savor its meat?

Did you know the black crested macaque has suffered a 90% decline over the past 30 years?

MOST HUNTED is a streetwear label on a mission to raise awareness and funds to save wildlife. Founded by two creative souls who want to give something back to the world.

MOST HUNTED believes if only every single person in this world would wear or use a one of their beastly good streetwear items, the problem would be solved. That’s why MOST HUNTED continues fighting wildlife crime one item at a time. Are you in?

Join the MOST HUNTED pack.

And 100% of the proceeds from the t-shirst will be donated. 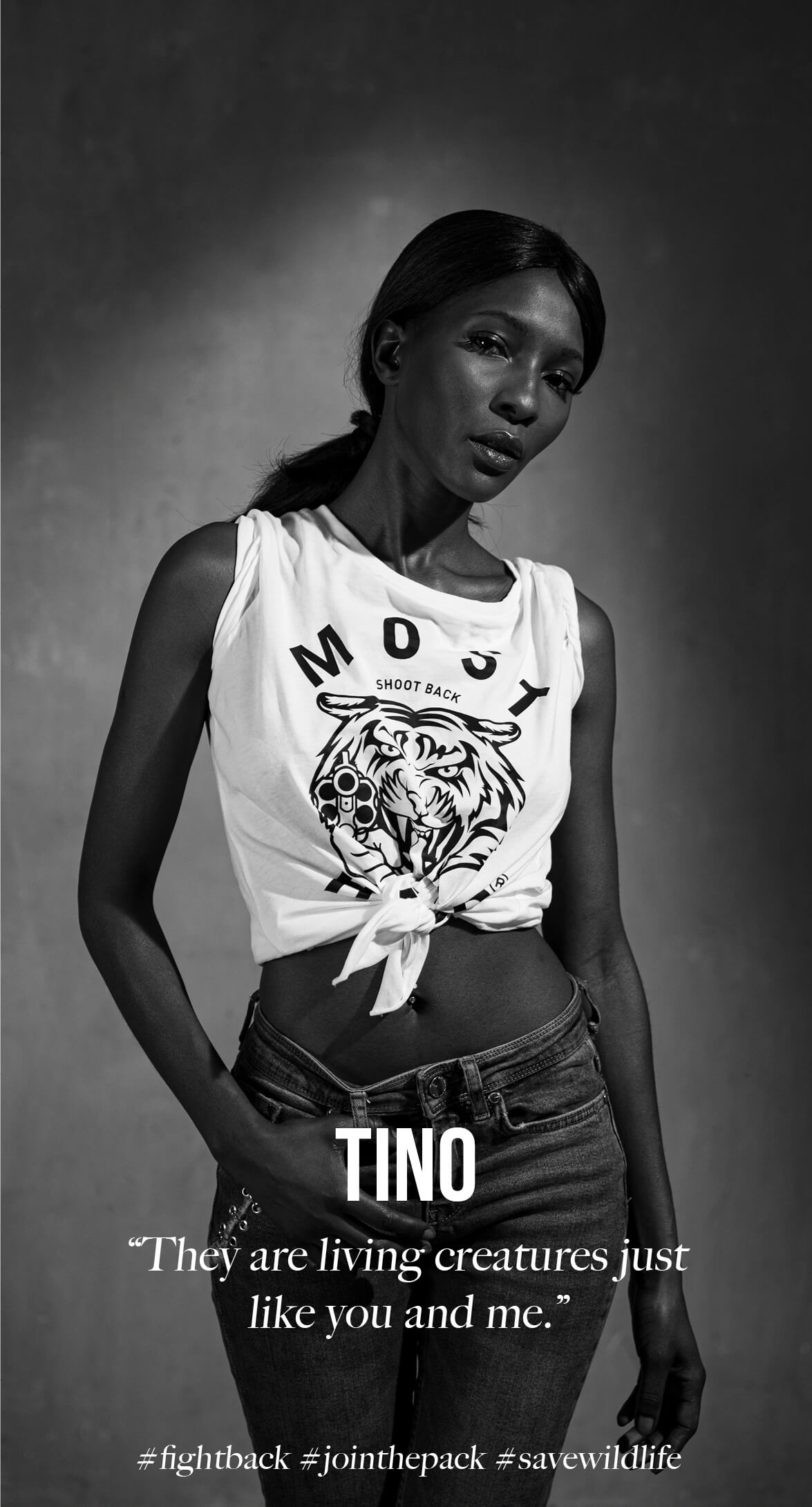 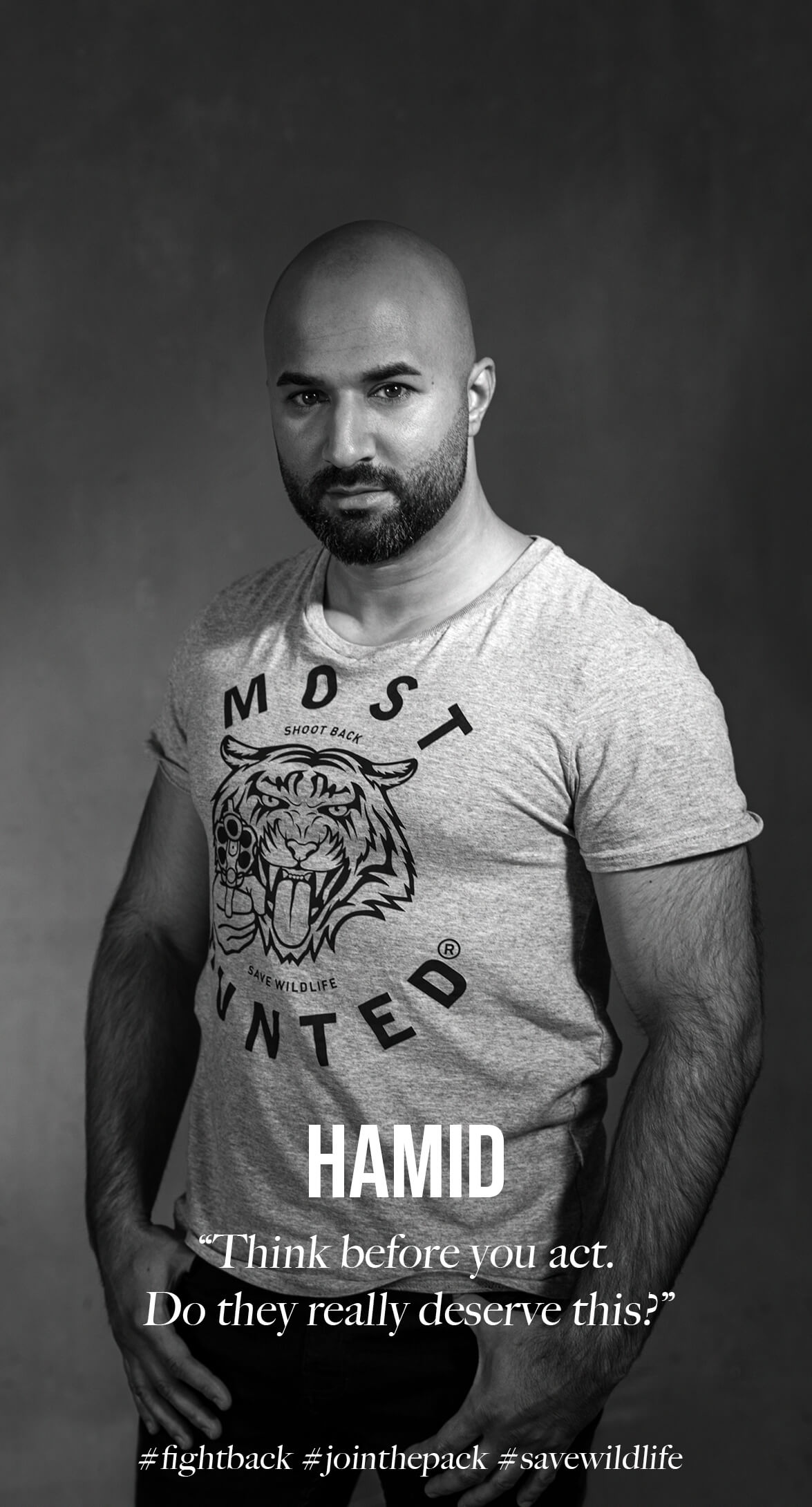 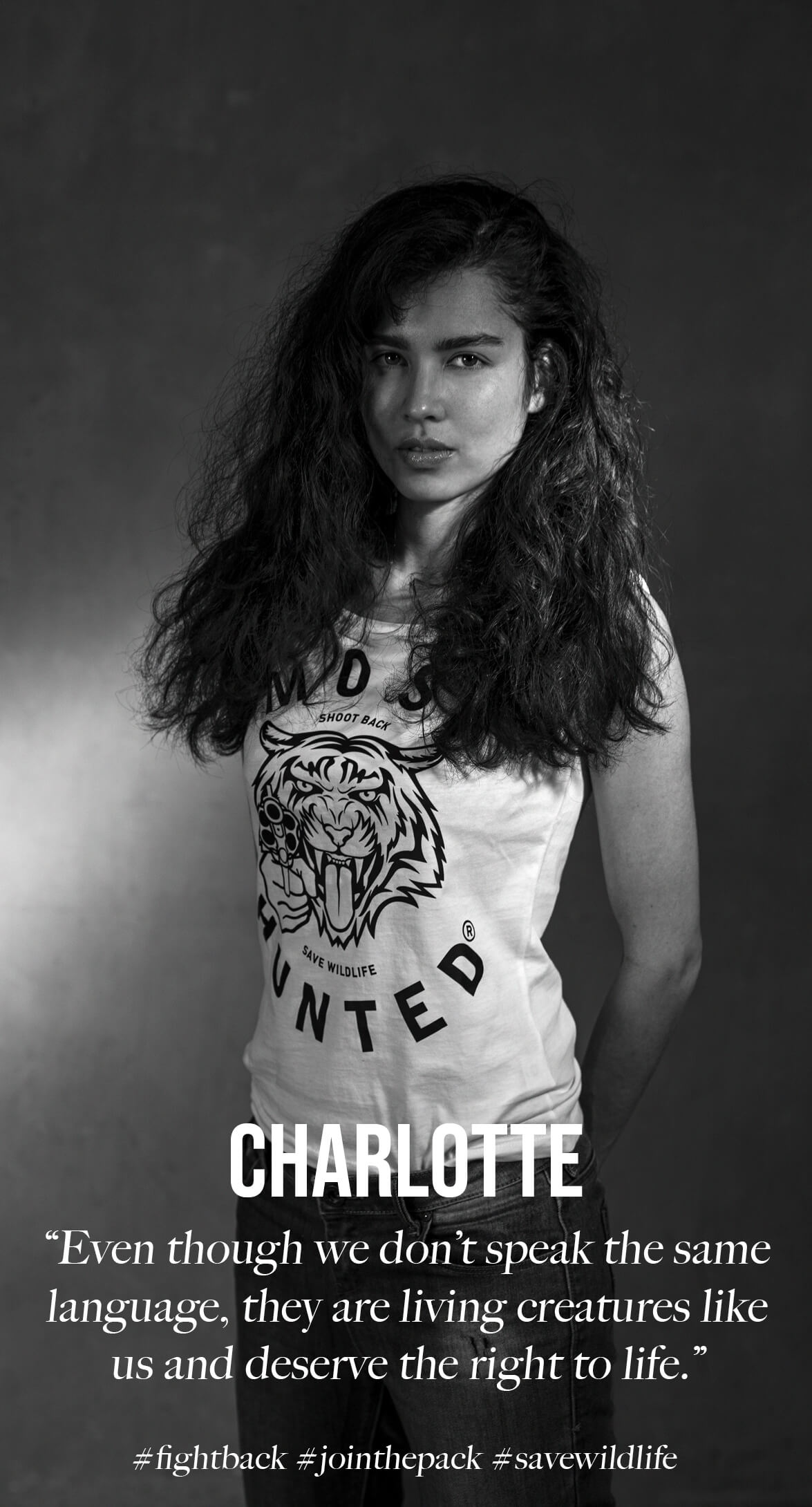 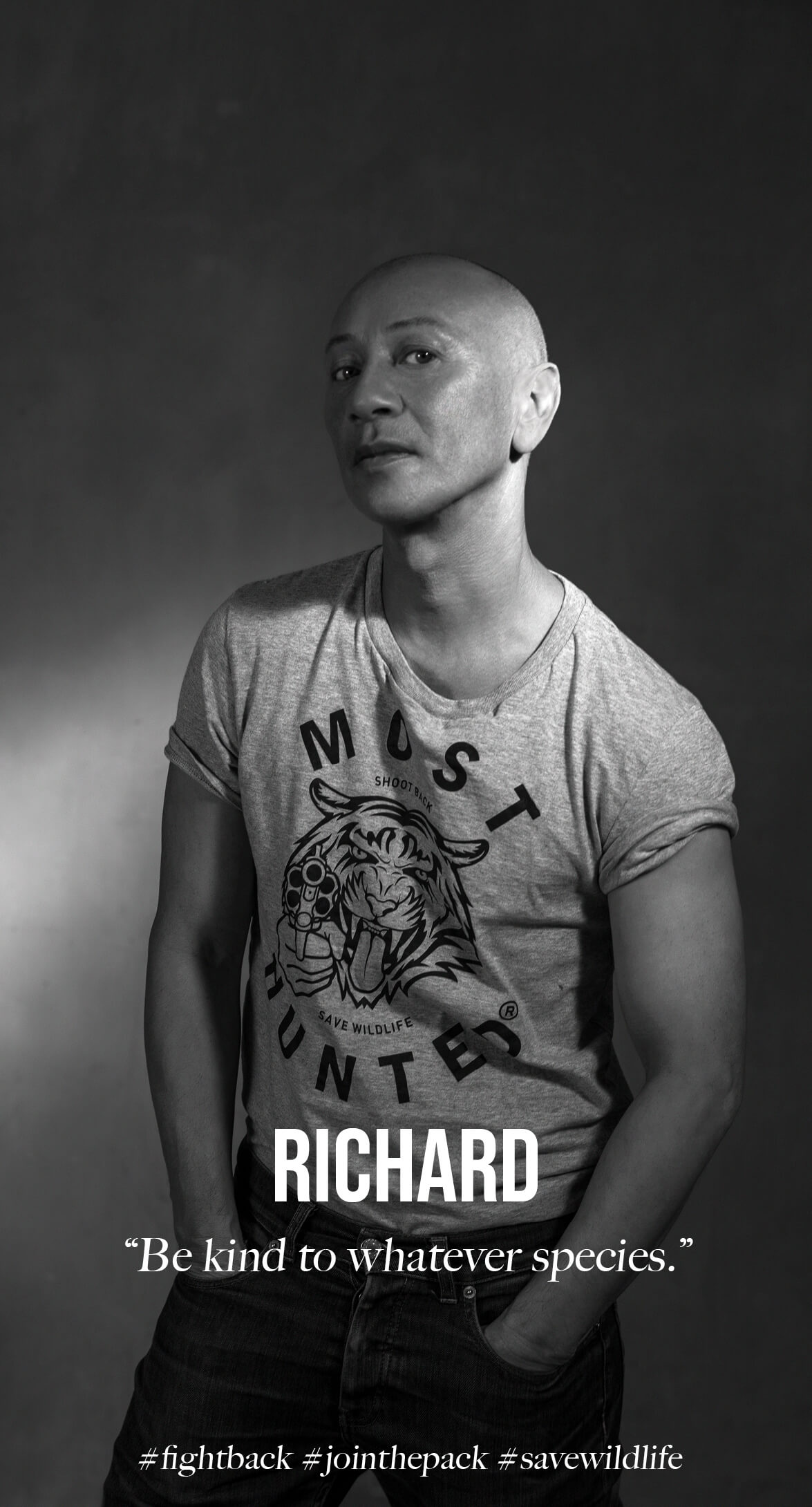 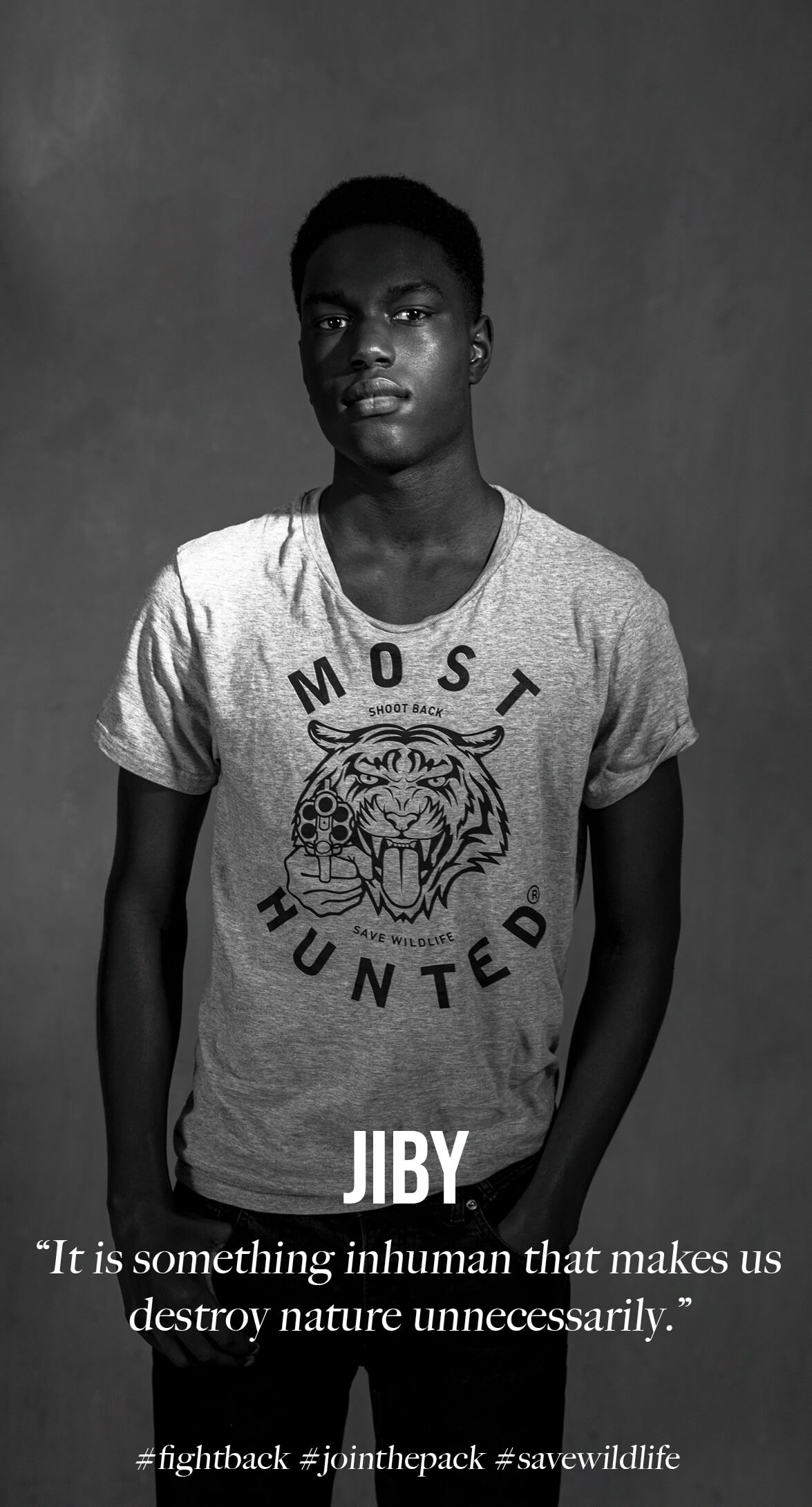 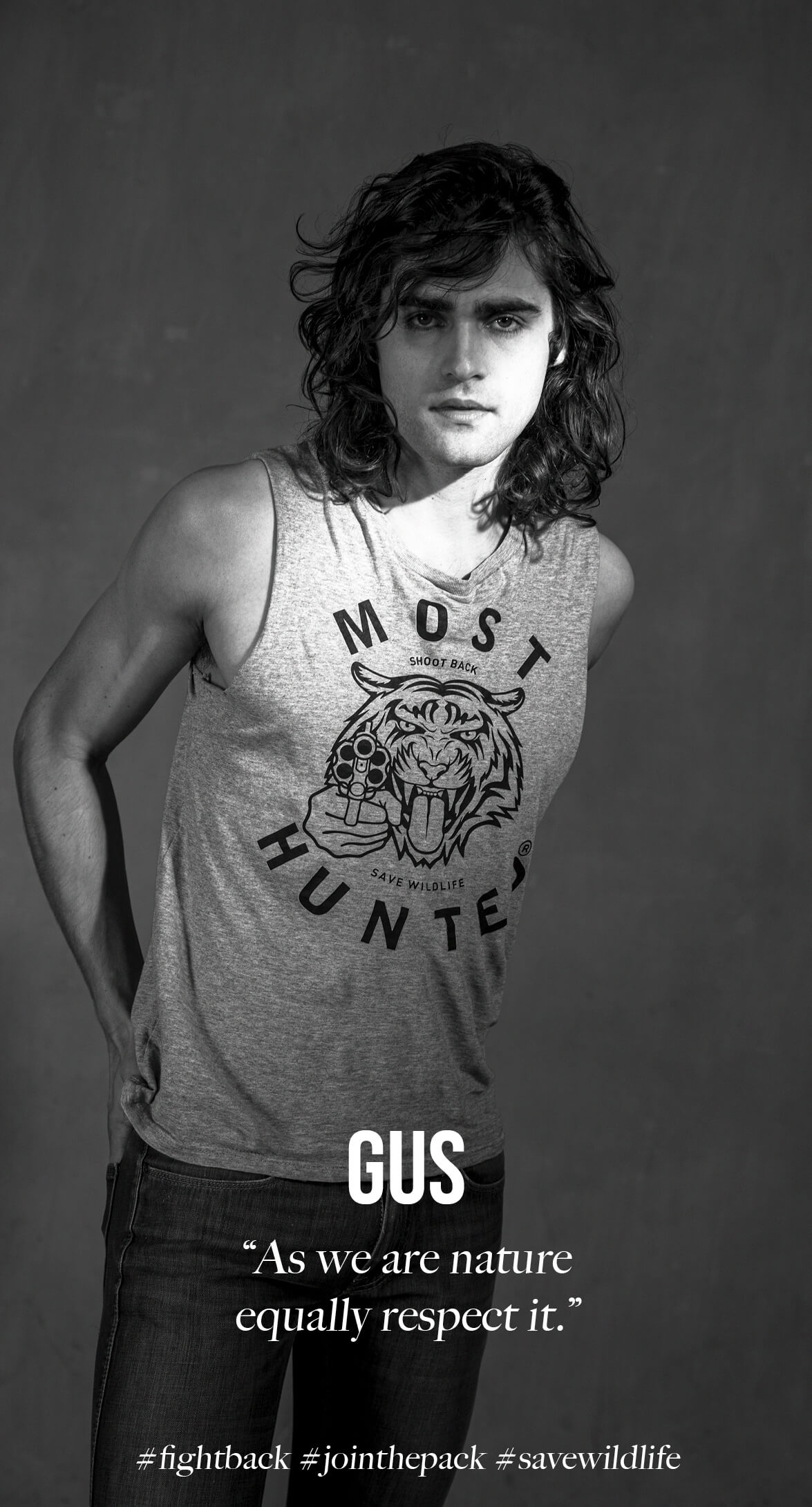