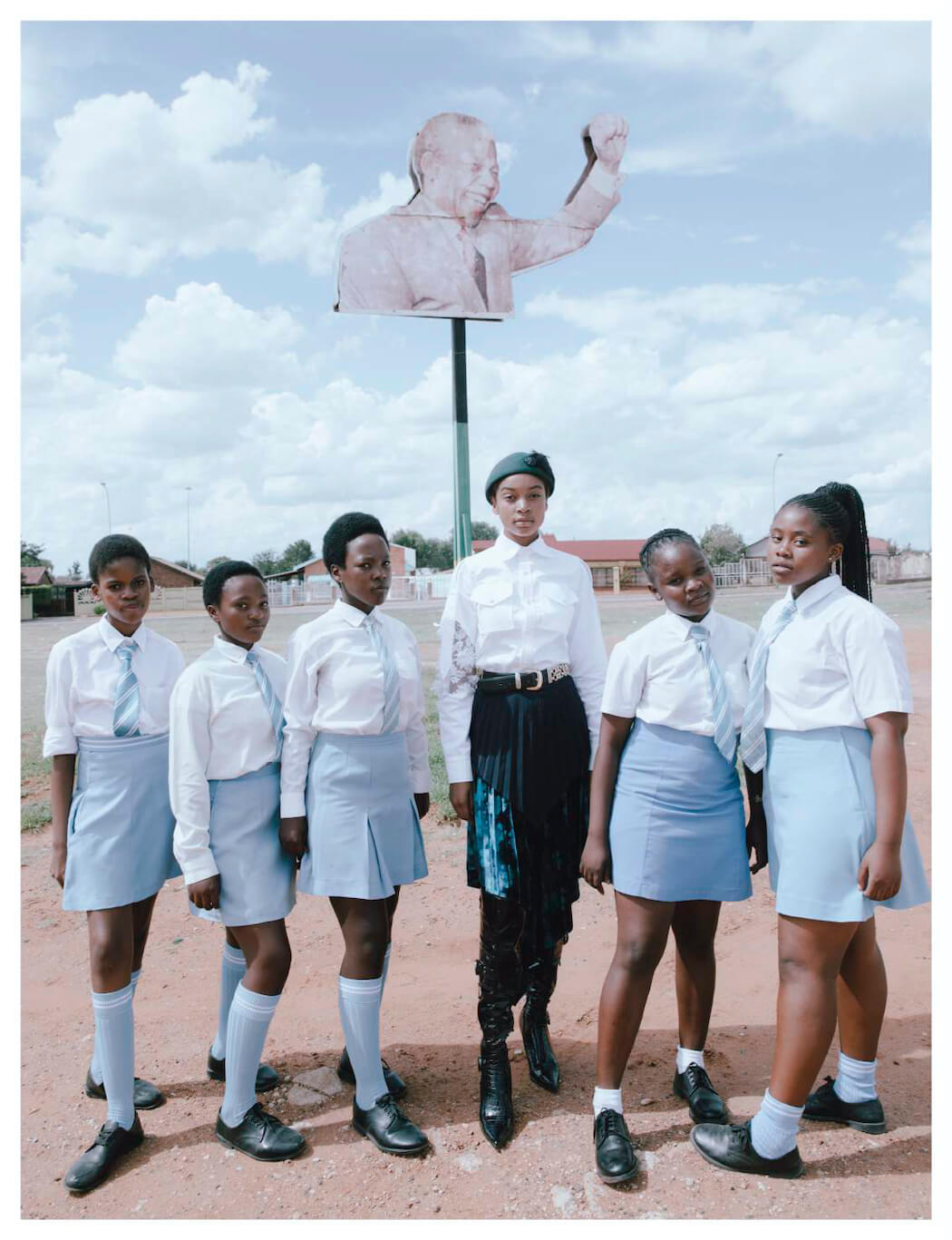 Thebe Magugu photos by Kristin-Lee Moolman set against against the backdrop of the Ipopeng township in the mining town of Kimberley 36
Anna Barr·
Fashion
·May 22, 2020

Two of the biggest names in fashion at the moment Virgil Abloh and Edward Enninful were both born to Ghanaian immigrant parents on other sides of the pond. It is also the diaspora that has been raising a light on the continent and many young independent designers opting to work with African tailors and local artisans on the continent than factories in China. But more importantly, during these confusing days, Covid-19 is seeing a turning point in the fashion industry that could potentially change our consumption culture. Fashion likes to pride itself on reinvention, but when was the last time we could honestly say we have seen that?

The article is part of our new digital issue. Text by Anna Barr @annoula_b

In the North, we have been suffering from Generation Burnout partially is due to the cult of productivity. We are stressed, full of climate anxiety as the planet is on a breaking point and we just can’t meditate that away. In the end, we have suffered from being time-poor. In order to survive, future trends will change according to consumer needs and businesses need to prioritize quality over quantity, but most of all the glorification of busyness will need to come to an end and we will see the birth of a new age where designers will encourage us slowing down. The newfound energy in Africa is also at the forefront of the slow fashion movement. While this sounds revolutionary, the most famous African designer, Azzedine Alaia, showed us that you can write your own rules and still be successful.

Tunisia and Morocco have a forgotten history made up of collaborations, craftsmanship, manufacturers for many luxury French brands. Today, Esmod Tunisia is the leading Fashion school of North Africa and in Morocco, we have seen Dior invite guests to its cruise show in Marrakech while designers Amine Bendriouich and Charaf Tajer of hype brand Casablanca put the country in a new epicentre of culture crossroads alongside many African diaspora creatives.

Tajer, who had previously consulted to Supreme and Off-White, draws upon inspiration from his Moroccan roots that have seen rappers like Skepta and Gunna decked out in his clothes, but by manufacturing in Morocco he has also given new found confidence that could see the future of manufacturing heading south. Earlier this year he was shortlisted for the prestigious LVMH Prize and stated “My wish is for CASABLANCA to join the legacy of French luxury brands and to signal a new wave of classic brands.’

LVMH has been keeping a close eye on Africa in recent years as Nigeria and Angola are also some of the leading consumers of luxury on the planet. What we also see is a generation returning home from studying abroad to work and cutting down on overhead costs. Last year two African designers in the LVMH Prize final, Nigerian Kenneth Ize and Thebe Magugu, have made their Paris Fashion Week debut, but can LVMH also validate Africans to buy designs from Africans?

With the African Union has launched the operational phase of the Africa Continental Free Trade Area (AfCFTA), it will be the world’s largest free trade area by a number of countries once it’s up and running, making exporting more interesting. Additionally, imports of used clothing from the US have also been curbed which prevented the continent from building its own industry in the past when it was flooded with cheap crap. The more relevant question should be: Does Africa need to be reliant on overseas?

Nigeria has the biggest economy in terms of nominal GDP on the continent and OG Supermodel Naomi Campbell has been a big supporter of Lagos’s Arise Fashion Week. She extended her support of Nigerian talent walking the Kenneth Ize show in Paris. The young designer focuses on reinterpreting Nigerian craftsmanship. With a community of weavers, textile makers and artisans across the country, he is producing luxury pieces that don’t steer away from nurturing existing cultures and bring the aesthetic to the future forefront. To be accepted on the official Paris Fashion Week Calendar is already a validation of quality.

The continent is having a resource boom, there is no doubt that the in-equality gap has grown, but with a generation connected online, we are witnessing a creative boom as well. Coincidence or not, Africa has the fastest-growing population under 30. Each African country will follow its own growth path, but as a continent, it is looking as a think tank of cool. The feminist movement might not be making as much noise, but it exists, and Africa will gain 10% to its GDP if women enter the workforce at the same rate as men according to The Economist.

Vogue Italia “Who’s On Next Dubai” 2015 winner Sindiso Khumalo focuses not only on sustainable clothing with an emphasis on African history but also is inspired by her activist mother. This motivated her to bring values of social equality and female empowerment into her brand and into her Cape Town atelier where she takes the time to also train women in her signature textile prints and embroidery with fair and equal pay. Africa and women empowerment is part of the brand DNA as each piece tells a story about it from history.

By controlling the whole supply chain and manufacturing, like many independent designers, she is putting the critical issues of distribution infrastructure in her own hands. If materials are supplied reliably, then technically there are no problems to make this system work except for delivery. Will African fashion get the structure that it needs? E-commerce is growing not just with more brands to buy online but future consumers. Having this new market also means that many designers are taking the time to gain creditability through sustainability in the emerging market where luxury is a consumer that consumes wisely whether its custom-made, eco-friendly, upcycled, rent or swap.
The difference between the photography, music and overall creative boom vs fashion, is that it relies on a supply chain which hasn’t been integrated properly into the global fashion system which is now showing its cracks. Generation Africa’s revolution will definitely need to be digital. The exposure that social media has been given not only creates an online platform to sell but due to the small quantities, slow fashion offers something authentic and a connection to a designer has never played a stronger role. In this David and Goliath world, the social media fashion giants and influencers have turned social media into a catalyst for loneliness.

South African designer Thebe Magugu, who creates visions of empowered, African femininity, is the first African designer to be awarded the LVMH Prize, he also belongs to the “Born Free” Generation which came of age following the fall of the apartheid system in ’94. Like the fall of the Iron Curtain or Berlin Wall, there is a cultural landscape driven by this new generation that needs to connect. With his yearbook style zine Faculty Press made up of with editors Lelo Meslani and Amy Zama, and art directors Abi and Claire Meekel, they spotlight South African talent from musicians Fela Gucci and Desire Marea of Faka, activist Lady Skolliet to photographer Travys Owen. Magugu describes it as a “zine dedicated to capturing key moments, ideas, and thoughts from the emerging voices that engage with and move our cultural landscape forward.”
Welcome to the new age of Generation Africa.