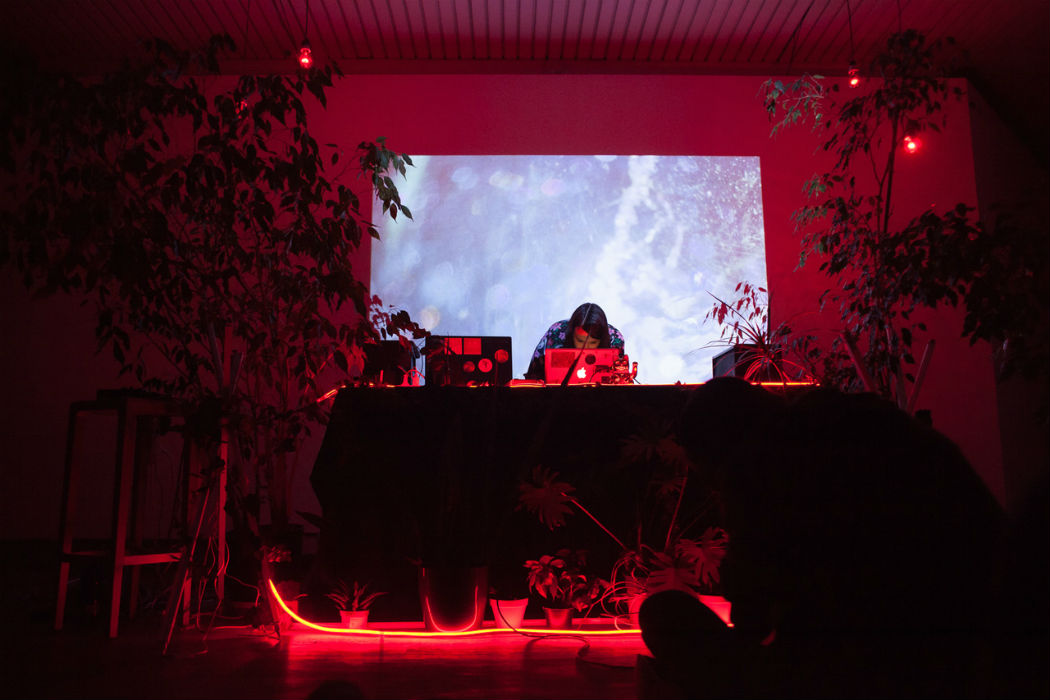 A large red, oriental carpet marked the listening floor on which the audience lounged. Signature changing colored lights dangled from the ceiling. The DJ-lectern was itself an art installation. Surrounded by plants, casting sharp shadows onto the visuals, a futuristic botanical garden was evoked. An Apple computer—the common device that connects contemporary sound artists— facilitated by Mango Object, Enchanted Lands, and Dane Law shared their sonic fruit in this little audiovisual paradise at the Czech center, warping classic and contemporary assumptions.

Genot Centre’s co-founder Wim Dehaen as Mango Object conjured up a strategic and bouncy Video Game aesthetic. Watching the visuals, the listener maneuvered from the first-person perspective as if through VR glasses. You are a tiny microbe with tunnel vision, wandering over piano keys, tape cassettes and over some kind of chess board with pawns. Enchanted Lands broke the ice, literally and visually, having just recently released her debut cassette “Feed Goals”. Her delicate sounds to the backdrop of glass cracking visuals by Tereza Bartůňková evoked ASMR tingles. UK-based Dane Law rounded off this contrasting meditative experience with hallucinogenic glitchy visuals, depicting a trip in the woods to his heart-pounding sound-throbs. A mesmerized audience let the noise wash over them. Their neurons obviously computing, some needed to mediate the experience with their phones to understand but could not escape the effect.

We spoke to Genot Centre about the event.

KALTBLUT: Can you tell me a little bit about the environment that you have created here?
Genot Centre: This is the accomplishment of Tereza Bartůňková. She does the scenography for our sleep concert “Silent_Night” in Prague too. Usually, this stuff has a really dry set-up: mics and equipment but here you have organic plants and flowers.

KALTBLUT: Is this concert taking club culture to the salon?
Genot Centre: Ambient is like a communicating vessel. Call it “abstract sounds club” rather than a “club sound salon”. It communicates both ways and there is no directional order or origin. It is quite important for us to present something that is informed by the club scene but a bit more abstract. Not just a physical party, but a party in your brain.

KALTBLUT: In between each set, there is a short break.Timing seems to be an important aspect. What’s the idea behind this strict way of listening?
Genot Centre: It’s riding on conventions. We make a break with the traditional way in which such evenings are usually orchestrated by actually speaking in between sets and saying to people this is what you are going to listen to. There is an idea behind it. It’s quite unusual in our medium to announce the artists, but we’ve been doing it for over 3 years and it works well. Normally, when you go to some experimental event and let’s say you are some kind of newcomer, it can be quite an unpleasant experience because you might feel excluded.

When someone gives you a bit of context that forces you to listen to what might happen next. If you go to something you don’t know anything about, you might feel judged. Abstract music is like chemistry or mathematics. If you present it as very inaccessible no one gets it. But if you ask the right questions, push at the right moment, people engage with it. You are not overwhelmed by the abstract sound. You have something to think about and it’s not pretentious.

KALTBLUT: So you guys are educators…
Genot Centre: It’s not about trying to imprint some idea in the mind of the people —educated or not— it’s just about making it accessible. People actually are pretty openminded. Usually, people separate between high art. We stopped. We just create an open environment. It’s like listening to only the soundtrack of a horror movie. The sounds are very avant-garde and campy but there is also a logic to it. You can understand it intuitively, it’s digestible. Avantgarde sound art is similar.

KALTBLUT: According to a study in America, in 2016 tape sales went up by 74% and though tapes are cheap, they are becoming incrementally less cheap. They are becoming popular “again”, as a Prague-based tape label, how would you say you are managing this?
Genot Centre: There is more of a stagnation in the tape scene than you would think. If you compare it to like 2 or 3 or 5 years ago, the difference is not that big. The difference is not from a sales point of view. The difference is what is being released. The styles of music. 5 years ago, you would probably find ambient and noise. Nowadays, you find super high-fi electronic music being released on tapes.

KALTBLUT: Is the tape more of a design choice?
Genot Centre: It is a design choice because it truly is an object. It’s nice to hold in your hands. On a small scale, and in an underground milieu, it’s a practical thing that works. However, it is still secondary to the curation.
For us, it’s about releasing the content. There is always a digital version available. So it is very democratic. It’s a way to show people, they can spend some time with the music. Nowadays normally, when you release a tape, it means that something is out for a longer period than on your SoundCloud or another digital streaming platform. It’s a way to show people that people care. Their cash, their time, it’s a physical object. We make small editions but for many of the artists, it’s a way to make the lifespan of the album a bit longer. Everyone can release music nowadays. When you do it yourself, this is a way to make it more interesting.

KALTBLUT: So what’s the message here?
Genot Centre: Have open ears. Think about the music you listen to, be openminded. Something radical, mythical, is quite often actually approachable. It’s just about the context. If you present abstract stuff that is digestible to people, you will understand it. You show options and possibilities which are not there. You make people aware of new things.