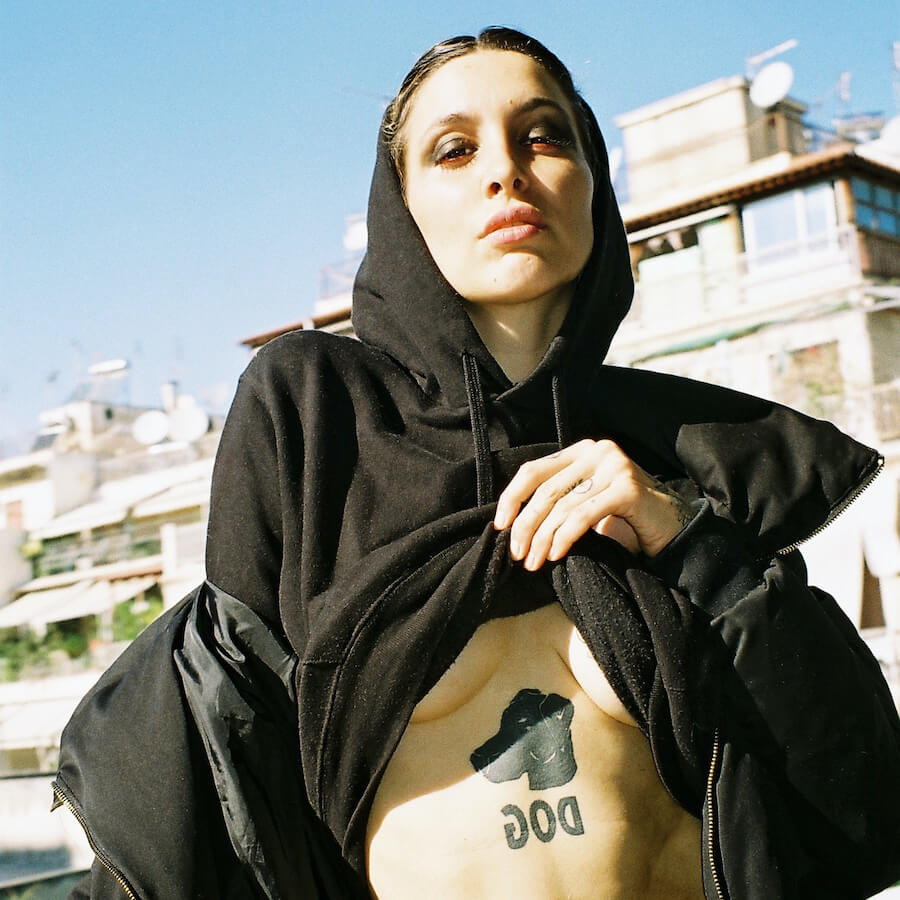 An Interview! While sound production has always been an element of Pepper Levain’s workflow, it was until now to accompany video installations and art performances. After her photography going around the globe, the multimedia artist now raises her voice right on: With the first EP „Welcome to The Other Side“. Electronic beats, acoustic soundscapes and chanted poetry take you on a soothingly yet trippy ride. We met Pepper for an interview to hear about her music, future visions and her (accidentally) ruining New York’s club kid art for museum display.

I think you started out as a photographer when it comes to arts. Do you remember how u picked up a camera and what u started working on?

My work is a hybrid of methods. When studying performance art and theatre I made costumes, soundscapes, created extreme characters. I connected with drag as an art form when still living in England ten years ago. In my sketchbooks I collected drawings of faces; my family and friends had to model for me. I guess those were the step before shooting portraits. I always wanted to go to NY. After graduating with my psychedelic freak fashion show „Runway of Milk and Honey – The Trivial Disaster of Being“ I started preparing for it, borrowed a Yashica from a friend and went.

What happened in New York?

I found a room with New York photographer and street artist „G“ in Bushwick. I did little jobs for her and took care of her big naked cat „Kitty“ (she’s on the Malibu cover artwork) when she was travelling so I could afford the lowered rent. She taught me about analogue photography and brought me into NY Fashion week – where I started working with designer Nina Athanasiou. I assisted her on shoots with Zombie Boy, Shaun Ross, Melanie Gaydos and more models that brought more queerness and diversity into the fashion industry. I had little money and made my ways with night trains and feet to all these parties and drag shows where I initially didn’t know anyone. After making first nightlife contacts I performed in clubs. As horror ballerina with neon dick n things like that.

I photographed many queer nightlife personalities that have been around from the 1970s until today. Polaroid agreed to support me with films, so I could shoot on their material. I spent the afternoons with Rumi Missabu, member of the cult performance group „The Cockettes” (who collaborated with Divine), went to my first Voguing balls and stayed a week with Ernie Glam and Michael Alig – who was still in curfew after freshly being released from prison after the murder of Angel in the 1990s. It was a special encounter to me meeting him and Ernie since the club kid era has had such a large impact on queer nightlife, pop and fashion culture until today. Ernie got a big suitcase out; storing all the looks he had made for the club kids back then. I put them on one after another and don’t ask me why – but I managed to throw up on the last one – that legendary ass-cropped-out bodysuit that was just about to be exhibited in a NY museum (good thing Ernie found it hilarious). I shot Amanda Lepore, costume designer and now healer Domonique Echeverria, artist Kenny Kenny and so many more. At Susanne Bartsch’s parties, I met Dylan Monroe who offered me to stay with her, and she became like a sister to me. NY made me grow up a lot. It gave me so much joy and equally a harsh reality check on many levels, eg. when Dylan died years later. The photos became my visual diary.

Yes, friends had bought a van there so we lived in it for some weeks. I met James at the WOW studios where he was shooting a new Transformations episode. We took some pictures in the bathroom where I messed up his chic 20s look someone had given him on the show. The rest of the time I mainly walked around (very long in LA coz I can’t drive), hung out with the sex workers on Santa Monica Boulevard and went to see drag shows in this Mexican place where whole families would just sit there eating burritos looking bored. We shared the parking lot with a fine guy who had been living in his van for years. He went to castings every day, to make his dream come true to become a famous Hollywood show master.

You just released your EP that I’m absolutely in love with. What made u say fewer photos more music?

Thank you for saying that. It took me a long time to have the confidence to use my voice to work with. You know exploring the beauty and gender content visually is one thing. Sound-wise I now don’t really give a damn if I hit the note or if I sound pretty. I have so many stories and lyrics to get out; spoken, screamed, sung, chanted. I use all those when performing my writings. Minimalist electro-punk with a spoken word like DAF and also Kraftwerk do (they’re from my home city Düsseldorf) inspired me initially to experiment. I then found very great female artists over the years who have their own style of performing lyrics on beats so they inspired me further. My friend Stine from band Easter is one of them. Femme rap, punk; of course Patti Smith’s poetry always give me energy when working on my stuff. I also use a cello and abstract the sound with effect machines. You gotta get away from those concepts of what looks or sounds „perfect”. It’s about your content and energy being delivered. Celebrate your own style with no fear. Same goes for my images.

In what further sense would you say your music reflects your photography as well?

With photography, I spent much time in the darkroom. Writing and recording music is a similar meditative process, waiting for what comes. When coming back to Germany I got into film school and worked with a moving image on 16mm. Like in my earlier performances I hardly used spoken language but soundscapes instead. Now my voice is there and I still work with field recordings and everyday life sound in my music. Pictures, sound, writings, it’s all a diary merging with imagination. 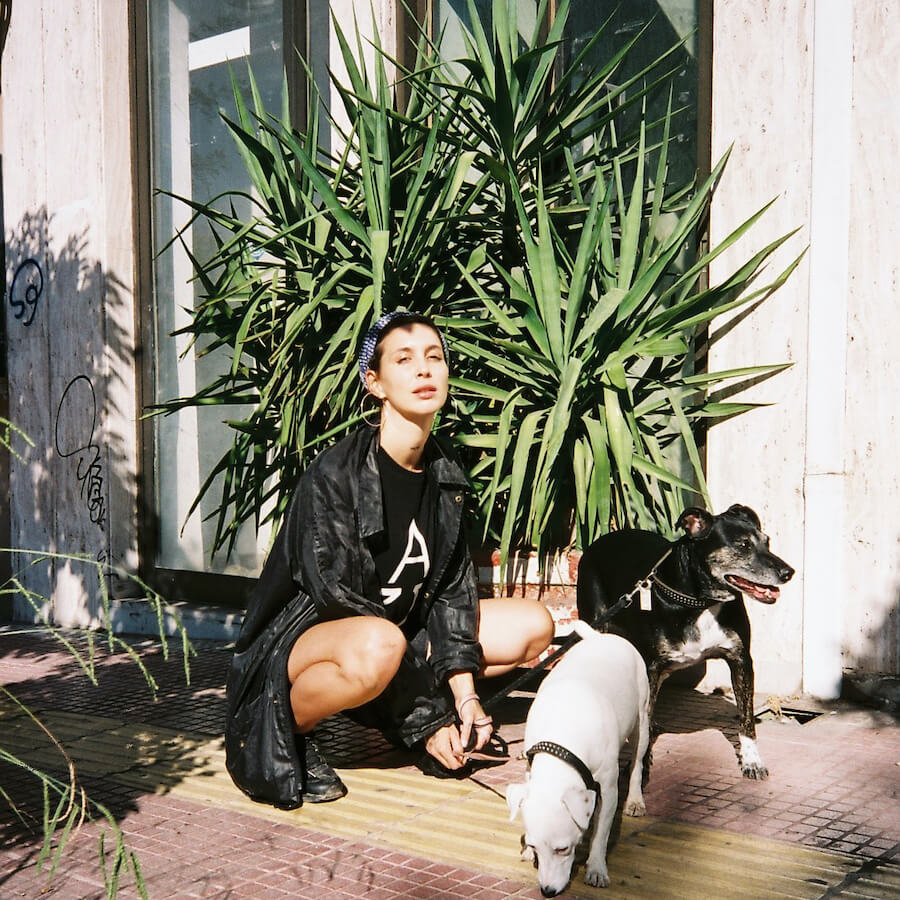 What does the EP title „Welcome to the Other Side“ imply to you?

Facing fears and coming after them. Feeling like an alien and finding other aliens out there. Family vibes. Going your own way. We’re all aliens I guess just most lost contact to the base and decide to live in a box where things are predictable and profitable, dress up as adults and pretend there is such thing as normality.

As a photographer, you are used being behind the lens. How does it feel performing your songs being in the spotlight?

The very first time performing lyrics and playing my synthesizers live was in a DIY space in Brooklyn two years ago. The bar manager gave me a pile of cables and said: „no time for soundcheck, just go for it!“ People were already drinking and playing games at the tables, I heard the dice rolling over me. I put the mixer up as much as possible and my hands were shaking while performing. My friends were late so I played for strangers and had to learn how hard it can be to get peoples’ attention – but even more, I knew that’s what I want. The next night at a fundraiser party my friends were there, I insisted on soundcheck, told the audience to stand on the tables and showed my butt-out-dress to start the show – and the gig was much more fun. Right now through Covid, everything is being postponed so I spend most time autistically at home with my dogs recording new tracks. 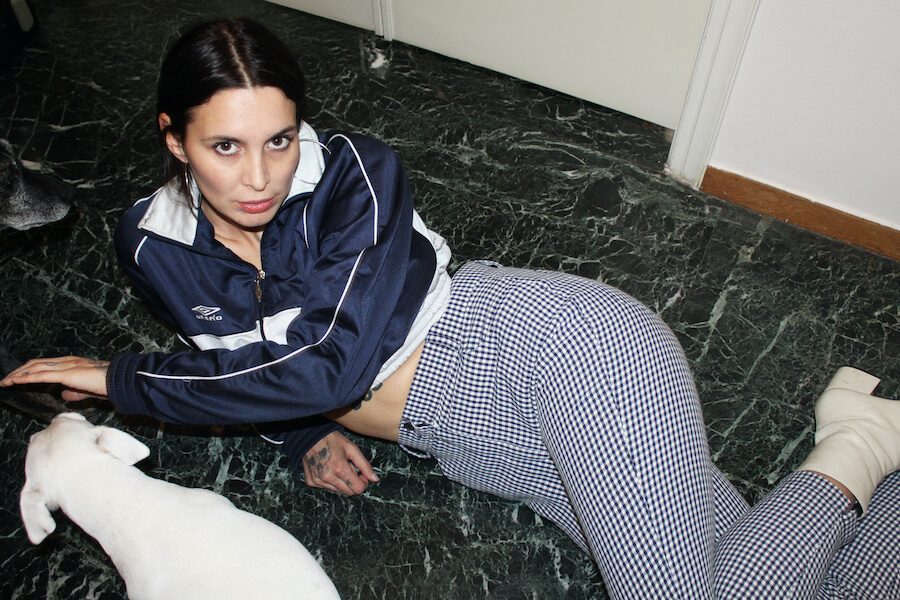 What should we expect from your music-wise?

Now the EP is finally out. Producer and Peaches drummer Princess Century aka Maya Postepski has worked with me on Malibu and made the Bloody Mouth Remix of Hounds. I live between Athens and Berlin and keep collaborating with people in both places. Recently I started working with artist Kris Vango, he made a really sick soundtrack of Hounds too. New singles and videos coming are „City Pigeons“ produced with Max Boss (Easter) and „Lines“; both to be released with the EP. I’m continuing with the album and prepare the live shows for day X.

What are you more in the mood to shoot now and why?

Always portraying. Humans are a particular species and as much I dread them I also feel a lot of love for some of them! When I started photographing people about seven years ago drag was still more underground than today. Queer existence is more visible in the mainstream these days but by far does not include full-on acceptance nor does it contain all parts of the globe. I faced homophobia myself and around me, had to let go of people who cannot accept love knows no gender and that self-determination is a human necessity. Queer nightlife and the friends I found in it gave me a reason to keep going when I was not in a good state with myself. The portraits I took over the years are a homage to the tribe of beautiful sisters out there who stand up for the right to love and be loved, for acceptance, for peace. I learned how it feels to be as welcome as you are. So that’s a mood.