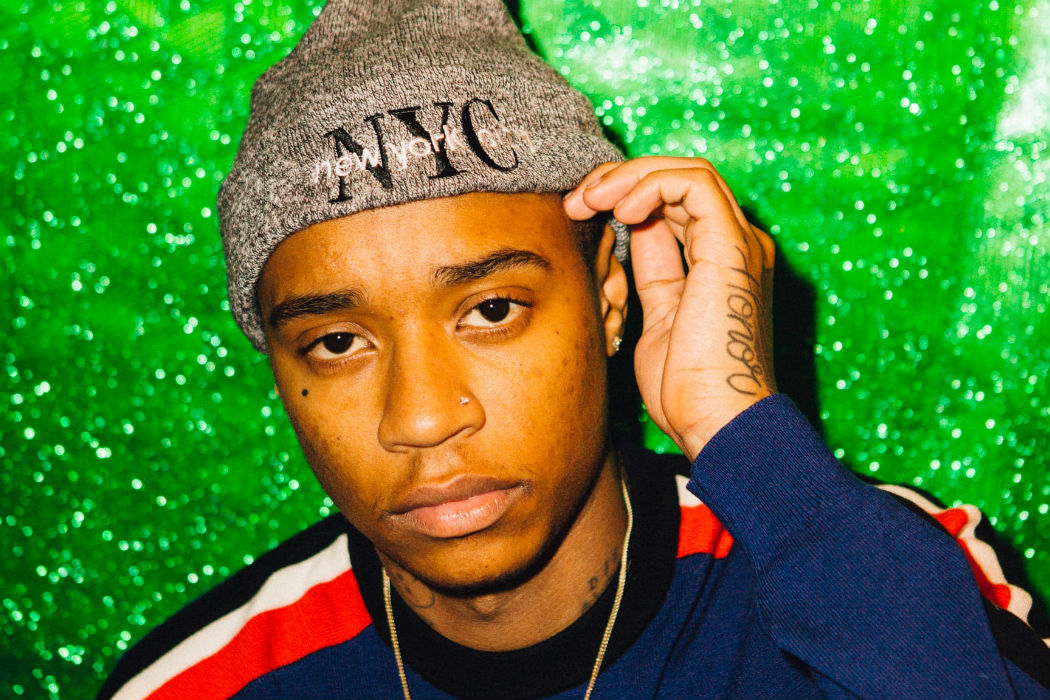 Sound of the Week: Rejjie Snow

Born in Dublin’s Drumcondra district, Rejjie Snow (real name Alexander Anyaegbunam) is 24 and one of rap’s rising stars. Snow has come a long way from his late teens, when he would upload clips to YouTube of himself rapping, using the moniker Lecs Luther. But he was always destined to succeed in one realm or another: As a teenager, Snow won a scholarship to play football in Orlando, Florida. Upon his return to Ireland, he was promptly awarded a scholarship to study film in Savannah, Georgia. He dropped out after eighteen months to pursue his dream of making music.

Things progressed quickly – Snow is signed to 300 Entertainment, the New York label that’s also got Fetty Wap, Maggie Lindemann and Young Thug on its books. He has opened for MF Doom and Kendrick Lamar and in 2015, got himself a tour slot opening for Madonna. His debut album, Dear Annie, was released mid-February of this year and was exec-produced by Lamar collaborator and Grammy-winning Rahki. He’s currently on his first European tour – which will see him perform at Berlin’s Lido on 26 March.

We joined him for breakfast on a cold March morning in Munich, a day before Snow flew out to Mexico to shoot a new music video.

KALTBLUT: You grew up in Dublin and spent your childhood there. How did you find Dublin’s music scene?
Rejjie: It’s not really flourishing. I definitely wasn’t a part of any scene. When I first made music, I was just in my bedroom, on the internet. Then I went straight to America about two months after that, so I never really got to immerse myself in the Irish scene.

KALTBLUT: So were you largely influenced by the US, or were there bands from your childhood that inspired you?
Rejjie: Definitely Ireland too – lots of pop music: Queen, Michael Jackson – the legends. That’s the music I grew up listening to, then hip-hop came in when I was a teenager and I developed a passion for it. When I made my first songs, it was more of a joke – I said to my mates that I could make a hip-hop song easily – and then I got fans off of that, and things slowly became what it is now, very naturally.

KALTBLUT: Were there any bands in the US that you were influenced by?
Rejjie: I’m a music fan, so before I was in America I was listening to music from America – jazz and acid jazz. 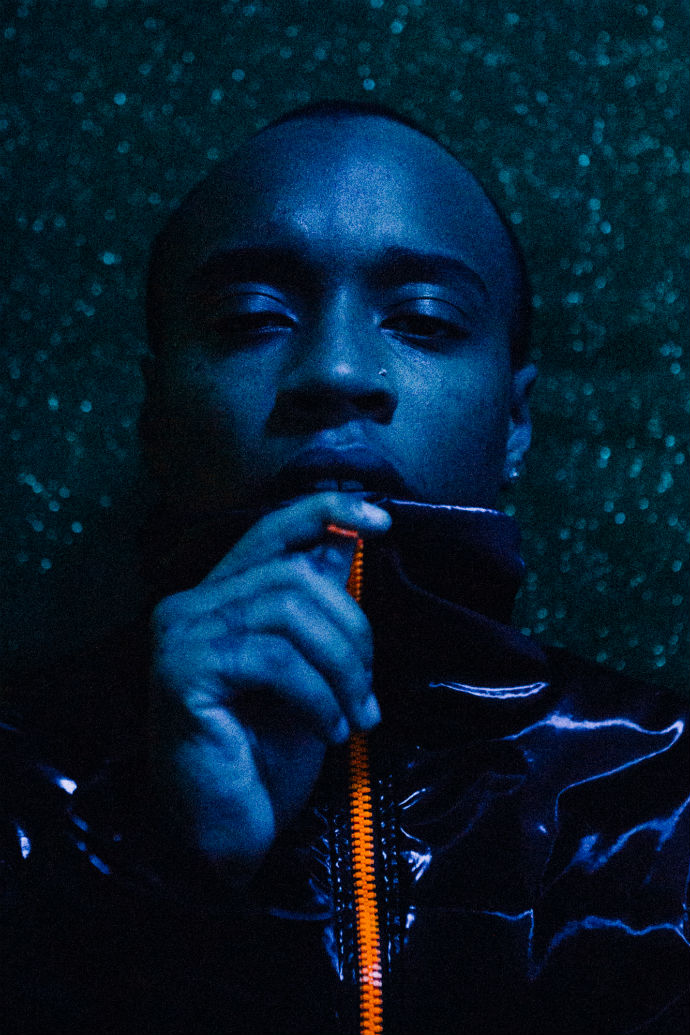 KALTBLUT: I can’t imagine that Dublin in the 90s was the most diverse place to grow up – tell me a little about your childhood.
Rejjie: It was very regular, I guess as I got older, it all hit me at once – that I was different, that I was the black sheep. I experienced racism – I played football, and I’m from a working-class area, so you get all types of different attitudes and ignorance. But I was always lucky enough to have good people around me, and ultimately it gave me tougher skin. That’s why I’m able to do so many things and not fear them. It was an important lesson, and it’s not something I think of as negative. I use it as motivation. I love where I’m from, I love the people and I’m grateful for the bad and the good.

KALTBLUT: Do you think it’s been beneficial for you to come from a city not known for its hip-hop? Or have you found it restrictive?
Rejjie: Well – I got to support Kendrick Lamar, and I hit up the promoter myself. We don’t really get that many opportunities in Dublin, and when acts came in, it was a chance to get your music out there. When I was younger, I met Pharrell and Snoop Dogg, and they pulled me up on stage, and I guess in that sense, it was great to come from Dublin, where there isn’t this big hip-hop scene and I did get those chances.

KALTBLUT: You’ve spoken about performing on stage with Pharrell in the media before – was that the moment you thought ‘I want to make a living doing this’?
Rejjie: Not really – it was a dream, but I never thought the dream was attainable because so many people make music. But it was motivation to get on stage. There are moments you never forget, and when I’m on stage now, those moments push me a little bit further.

KALTBLUT: I guess – alongside the work you put in – you’ve also been very lucky to meet these incredible artists so young…
Rejjie: Mad luck. I mean I work hard, but you need a lot of luck. A lot of things are just chance – the people you meet is most of it. Just being in the right place at the right time.

KALTBLUT: You also studied film, right?
Rejjie: That was in Savannah, Georgia. I did a year and a half but dropped out. I wanted to focus on music. That was hard – no one really believed me, and I was trying to convince my parents that I wanted to do music and let go of the scholarship I had. Luckily, they trusted me.

KALTBLUT: How come you chose to study film in the first place?
Rejjie: I have such a passion for visual stuff – and I’d like to make films eventually. Maybe I’ll even go back to school.

KALTBLUT: Does that mean you have a creative hand in directing your videos?
Rejjie: Yeah, for the most part, it’s fifty/fifty, and I’d never approve anything that’s not 100% me. I’m fully in control of my own stuff now, and it feels really good – a lot of this business is confusing and there are so many people around, that ideas can be taken and flipped, so I like having some control over the visuals. When I make music, it’s very visual for me, and really want to marry those two worlds together.

KALTBLUT: Where are you living now?
Rejjie: I live in London. I’m in Brooklyn sometimes, but London’s home.

KALTBLUT: Would you ever move back to Ireland?
Rejjie: Yeah, it’s in the plans. Nowhere else but Dublin though – everywhere else seems a bit too rural. But I’m just trying to find the right time. I think I need to be away from there now to travel and seize all these opportunities. It would be hard if I still lived in Dublin.

KALTBLUT: Let’s talk about Dear Annie. The album’s executive producer is Rahki…
Rejjie: Yeah, he produced a couple of songs, and the rest were produced by this kid from Paris called Lewis Ofman. He’s nineteen and amazing. We just met by chance and made a bunch of songs – it was an easy process.

KALTBLUT: How did both of those collaborations come about?
Rejjie: I reached out to Rahki and he was down to work. We did that for a year, but I needed to take time out and stop trying to force it, and then met Lewis by chance. He was the catalyst that made everything happen. We connected musically – I’d never had that – somebody who understood exactly what I wanted to do. Lewis and I made most of the album in about two or three months.

KALTBLUT: It seems like the album has been a long time coming though – it doesn’t feel like this should be your debut album…
Rejjie: I know. I’ve been working on it for two or three years – but you have to really feel it, and I wasn’t feeling it at the time. I guess certain things also didn’t make sense back then and didn’t want to talk about them, but it all makes sense now. I’m very grateful that people stuck with me.

Interview: Weyes Blood on smashing and sinking, yet still coming out with something extraordinary

KALTBLUT: It’s a long album too, with twenty songs…
Rejjie: Every song is meant to be there. Originally, I wanted it to be twenty-six songs, but for some reason, everyone was against that. How can people watch movies for an hour and a half but not want to listen to an album with twenty-six songs? So, I’ve got songs left over that I’ll probably release in a couple of years. And I think when you listen to the album, it’s not that long – the interludes break it up too.

KALTBLUT: What does Annie represent?
Rejjie: She’s a fictional character. She represents everything: love, death, loss, evil. And it works with the imagery of the album cover. I don’t know that girl – Rahki sent me that image – it’s someone he knows from Phoenix, Arizona. I spent so long trying to sort the album cover, then Rahki sent this photo to me one night, and I was like ‘fuck, that’s the image’. You get lost in it – the colours, the red hair – somehow it reflects the music.

KALTBLUT: The album has a lot of French imagery…do you speak French?
Rejjie: No. I did it at school, but I’ve forgotten it all. As you get older, you forget shit. You forget to even put socks on and shit, you know what I mean?

KALTBLUT: But you have some sort of affinity to France – or at least Paris, judging by the album?
Rejjie: At least the second half of it, yes. It was not my intention, but I guess it’s there for a reason. I really love Paris, so it’s been cool to show that.

KALTBLUT: What is it about Paris that you’re drawn to?
Rejjie: The architecture, the food, and the lifestyle. I come from Ireland – it’s very different. And I watched a lot of movies set in Paris – they inspire me. It’s a really romantic place. I lived in République for two months, which was cool.

KALTBLUT: And now you’re about to start your 31-date European tour…
Rejjie: Yeah, my biggest one yet. It’s very ambitious.

KALTBLUT: You’ll be exhausted by the end of it…
Rejjie: I’m tired man. But if I wasn’t here, I’d just be hanging out in Tesco’s.

‘Dear Annie’ is out now