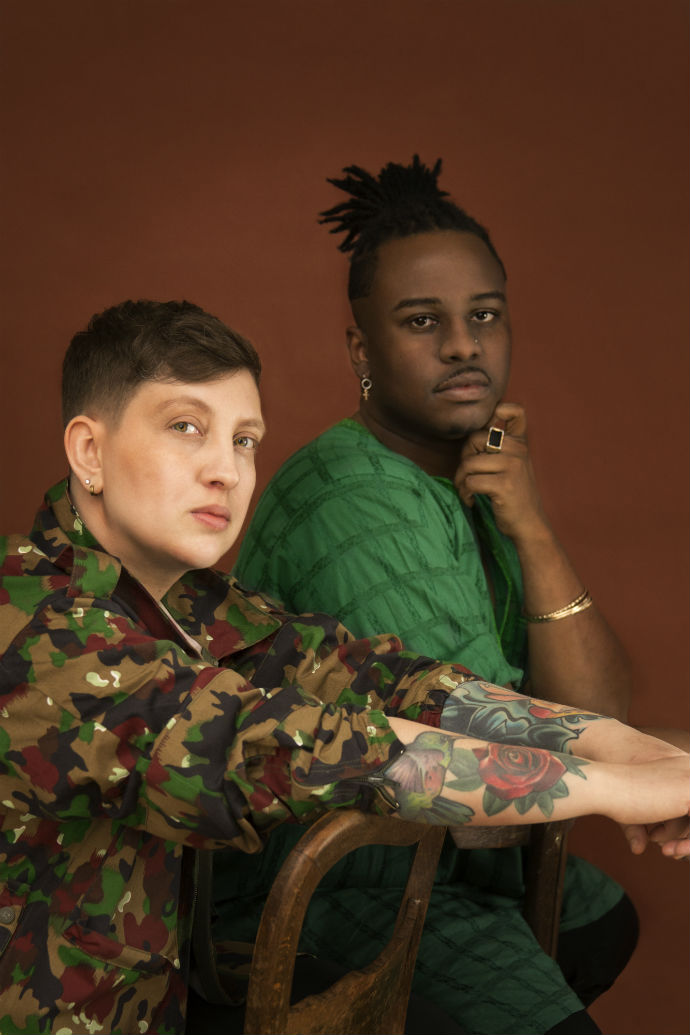 The powerful sound of Chicago forged a bond that Shaun J. Wright and Alinka share for house music and helped inspire their collaboration and friendship. After years of touring and recording with the famed Hercules And Love Affair, Wright relocated back to Chicago where an impromptu introduction would lead him to Alinka. The pair met up in her studio to discuss ideas and instantly bonded over their love of Chicago House and Cajual records. After a trip to Queen at Smartbar they were fast friends and ready to get to work. We caught up with Alinka and Shaun during their newest release on Twirl!.

KALTBLUT: Let’s chat about your latest release, The Romance EP
Shaun: Well, Romantic Friend and Pull Me In we kinda did at the same time, around last September. They were really organic. I wrote the lyrics for them as it was happening. Sometimes we have the instrumental first, or the lyrics first, but this time in particular we had a lot of time to just work together. Romantic Friend relates to someone that I was seeing who made a comment about “romantic friends”, and I’d never really heard that before. It kinda came up when we were categorising what we were doing, like were we lovers, whatever. I just thought it was such an old school phrase, like, we aren’t partners… So he just said “romantic friends”. And I just had to write a song about it, because I had never heard that terminology before. So the song is kinda extracted from the truth, but it’s not. I just liked the notion of it really.

Alinka: We finished the EP last fall, we just had such a large collection of tracks that half of them went to Heidi for the Jackathon release, and then the other tracks we kinda held onto to figure out what we wanted to do with them. After a while we just realised that we wanted to keep these for Twirl!. Also this EP I think sounds different than the stuff that we’ve done, which is really exciting, and I think that’s another reason why we wanted to put it out ourselves.

KALTBLUT: Have you had the chance to perform it live?
Shaun: Yeah, we have. I did Pull Me In this time last year when it was a fresh demo during a set at Panorama bar, and had the chance to sing it. It was basically a week after. There was great feedback immediately. And then we did Romantic Friend at YO! SISSY Festival in July, where together we DJ’ed. So it was kinda like a couple of mini performances, and we had the chance to test them out. They both got great feedback, I mean, performing live to an audience is a whole different beast to playing the track. Doing it live, there’s an excitement. It’s something quite… I can’t really articulate it… palpable. People just respond differently when you’re singing it live versus listening to a recording. I think also because Romantic Friend is so different musically, it’s more in the pop lane, maybe electro-poppy, not vintage, but you know? A playing with the Minneapolis sound in our own Chicago house way. So yeah, people have been really responsive about the song overall. It’s not just a club banger, it’s a tune, you know?

KALTBLUT: Have you tried any new structures or production methods to create this new sound?
Alinka: I think it’s just been really natural, that’s why we’ve been able to do so many different things. We never really sit down and have a plan of what we want to do, it just kinda comes out. I mean, once in awhile we’re like “Let’s make a techno track!”, so just make it a little bit faster at the beginning, but you still never know what you’re going to get at the end of it.

Shaun: Or we’ll say “Let’s start making a techno track!” and I sing over the whole thing. (Laughs) Alinka’s like, “I thought we were going to make a techno track?” And I’m like, “Well I gotta sing on it now!”

Alinka: Well now I got the new Maschine from Native Instruments, so that’s going to add a lot of new elements I think. I tested it out with them and it was really incredible, so I’m really excited to start working with that.

Shaun: I have more ideas than technical ability, but I’m starting to use this software in a solid way so I feel more confident. I think practicing and working with Alinka in this capacity, I can definitely vouch for it.

KALTBLUT: Are you going to be performing the full EP live soon?
Alinka: No. We want to eventually have some sort of live thing, that’s like a special performance that we do. We want to work on incorporating more live stuff, even if it’s just playing certain things live over an instrumental with Shaun singing. We haven’t figured out how to do it technically.

Shaun: We want to work on the whole visual aspect, you know, it’s not always considered. But after being in a band for so long it’s difficult for me to just stand in front of people and sing, with no show. You want visual entertainment. I mean, it’s nice to stand and sing, but with dance music you want extravaganza! So we have the music now, that’s what we have working in our favour, we have this body of work that stretches 5 years, and we’re releasing consistently.

Alinka: I think when it does happen it will be a special show rather than a tour. We might consider a band, or add a couple of people, or more singers, you know? We’ll know when we know. We want to surprise people.

KALTBLUT: To turn a dance track into a live performance takes a lot as it is
Shaun: Well, it ends up sometimes being really compartmentalised. You either sing or you DJ, which is why I think what we’re doing isn’t seen so often, as we’re able to incorporate all of that. So that in itself is substantial right now. So yeah, when we do the shebang, we want to do it right! (Laughs)

KALTBLUT: What else have you been working on?
Alinka: We’re almost finished with a remix for Mr. Smith…

Shaun: … This American R&B artist, who is really pushing us in a whole different direction sonically, because it really is a different style of delivery. And we really appreciate that.

Alinka: I did a remix for Hard Ton, which was really exciting since I’m a huge fan. I think I wrote them like a fan message when we became friends, so it was really cool to be able to do that. They’re super nice.

KALTBLUT: When you became friends?
Alinka: Yeah, I think we had mutual friends, but I finally met them once in Panorama. I was like “Oh my God, you’re Hard Ton!”. (Laughs)

Alinka: Yeah, I love all of their music, so it was really fun to do.

Shaun: I just had a release with James Curd from Greenskeepers last month. There’s a few other things in the pipeline too, but that’s a little premature to talk about.

Alinka: I’m trying to think what else. I mean, we’re working on stuff together. Super new stuff. That’s really fun. We had 6 weeks in a row of shows, together and separately.

KALTBLUT: Shaun, you’re based in Detroit, right?
Shaun: Yep. I’m based here in Berlin when I’m touring Europe. It’s been pretty consistent for the past couple of years. I spend a lot of time here but I don’t plan to move here.

Alinka: And I don’t plan on leaving. But I do miss a Chicago hotdog…

For further information on the perfect Chicago hotdog recipe, you can follow Shaun and Alinka below. But in the meantime, enjoy their latest release, The Romance EP, out now via Twirl! Recordings