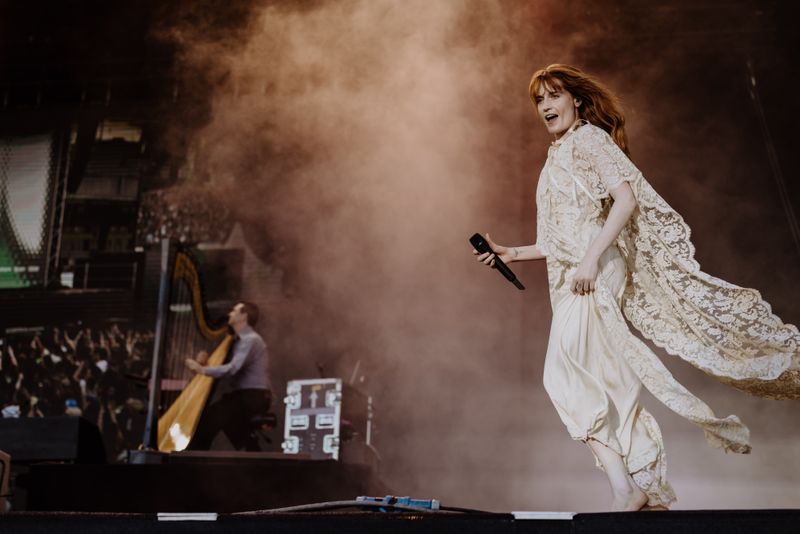 Tempelhof Sounds 2022 – A Paradise for Indie-lovers

Sun and good music – that’s what Tempelhof Sounds festival has offered Berlin’s indie heads in early June. With a jam-packed lineup including international superstars in the likes of Florence and the Machine, The Libertines, Muse and The Strokes, as well as exciting newcomers such as Bow Anderson, who we interviewed ahead of the festival, and Griff, the three-day event taking place at Tempelhof Airport offers everything the heart desires.

The first day included performances of indie legends, such as Two Door Cinema Club and The Libertines. Though it was hard to enjoy Two Door Cinema’s set due to the glaring sun and heat, which was especially brutal at the main stage. Luckily, the festival had many beer-garden like bars and food stalls available where one could shelter from the heat, however, due to the amount of people, one would end up cowering under an umbrella in between benches and tables. The prices of a wide variety of food and drinks on site was average for a festival, however, considering the weather, there should have been more options to refill water.

Following Two Door Cinema Club on the main stage were the Libertines. Buying tickets for a Libertines show used to carry a bit of risk due to the lead singer Doherty’s drug addiction and him therefore sometimes not showing up or not completing a gig. Luckily, Doherty is clean now, and seeing him in such a good, clean and professional shape on stage now makes the band’s performance even better. As soon as The Libertines finished their set, some of the crowd moved over to the Vibration stage for Molchat Doma. The Belarusian band was my top performance of the festival, with the band playing a variety of their most famous tracks, including the viral TikTok hit “судно”.

Florence and the Machine headlined the first day, and her show was as amazing as you’d imagine. The British singer has played an almost two-hour long set filled with classics such as “Kiss With A First”, “Never Let Me Go” and “Dog Days Are Over”, as well as some tracks from her latest album Dance Fever, such as “King”, “Free” and “My Love”. In her performance, Welch managed to make the crowd sing along in ecstasy, got everyone to put their phones away for one song and brought out emotions from happiness to sadness. Though she’s a superstar, she’s not shying away from her unique talent to connect to every single person in the crowd, making them feel she’s singing and speaking only to them.

After a successful Friday, the next days were followed by a stellar performance by Alt-J and a bombastic show by Muse on Saturday and The Strokes and Big Thief on Sunday.

Overall, Tempelhof Sounds offers a stellar line-up for three days at a cost of 180€ and the luxury of being located right in Berlin.

Follow @tempelhofsounds to keep up with details about next year’s edition of the festival.
Cover photo by Frank Embacher.

Johanna Urbancik is the host of the On The Ground podcast, in collaboration with KALTBLUT and Refuge Worldwide. Listen to the podcast here.