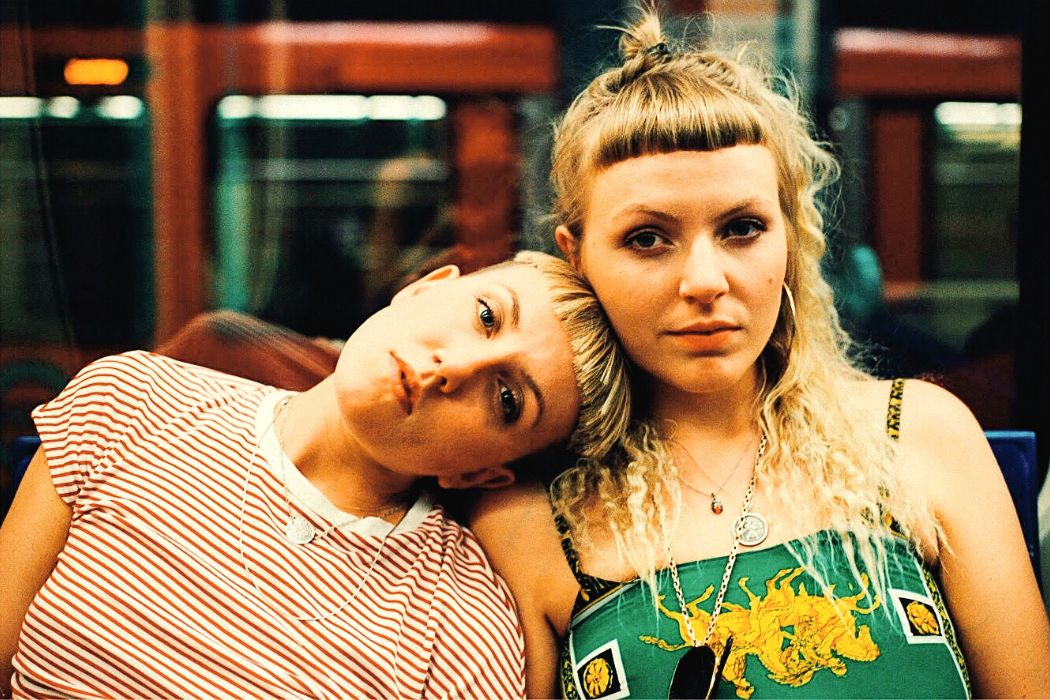 To live and breathe music: An interview with IDER

IDER is at a wonderful moment of growth in their music, since their first single a few years ago the honest, welcoming and ethereal sounds of the North London duo resonate from the top of SOHO House. Inside a table has been set for IDER’s small entourage, more friends than anything, a lot of cheek kisses and warm hugs are exchanged as they appear out of the elevator. For all the poolside swagger, elegant ladies taking long draws from their cigarettes and clean-cut guys mulling around the balcony; Lily and Meagan augment the scene with an effortless cool that accompanies IDER’s sound. IDER set up a keyboard and stands for their mic, bass and guitar by the pool they’d been swimming in earlier before ushering in a warm summer night.

KALTBLUT: Since your first release in 2016 what has changed for IDER?
Megan: I guess like, our songwriting and production has found its groove more, we’ve been friends for years though, we met six years ago at uni taking a music course and just kinda instantly fell in with each other, so it’s definitely been a longer journey than the last two years in that sense.

KALTBLUT: While studying music, did you find it hard to separate the feeling of simply turning in an assignment from the freedoms of making music?
Lily: Well I guess we like, it was all one, sort of combined them didn’t we?
Megan: Yeah, we were lucky in the sense that our course was more vocational than being too practical we just sort of submitted it and it got great, like-
Lily: turned out fine really
(laughing)
Megan: Yeah, there were a couple of essays but, the music always came first.

KALTBLUT: Nothing where it was straight back to the drawing board? Had to start from scratch?
Megan: Yeah, sometimes we’ll be sitting on a song for months and can’t get it out then we’ll make that decision to move on or leave it alone.

KALTBLUT: Even on some downtempo tracks the drums on some tracks feel massive.
Megan: Definitely, on a few of our new tracks we’ll be releasing soon there is a bigness to it. We’ve gone…Big, we’ve gone fat with the drums.

KALTBLUT: It must be weird seeing comments pop up, “they make break-up music or mood music” Do you have a core audience you’re looking for?
Lily: No, it’s funny really I feel like we don’t massively think about that, for us the most important thing is that the music is real to us… and if it is real to us the music will just bring-
Megan: It could be anyone, and we have found that so far that we have people who are like 60 and then 17-year-olds, there’s a real range of interaction from different audiences.

KALTBLUT: Is it better for IDER to write songs during the day or during the night?
Lily: I always say night time.
Megan: We always say night time but we try to write them in the daytime.
M&L: We always kinda get up and, yeah, like-
Megan:  Time to get to work, and-
Lily: (Laughs) Yeah, turn up to “the office”
Megan: Yeah I dunno, it’s true, I’ve heard from a lot of other artists that night is best… Maybe it’s ’cause there’s a stillness in the world. Everything’s quiet and you’re really in your head and you’re really with your thoughts.

KALTBLUT: Does that ever get on your nerves? Seeing each other so much?
Megan: Not really, you would think-
Lily: Yeah I mean that seems the obvious thing right, we’d get on each other’s nerves but we’re pretty compatible that way. We’re like very….
Megan: Easygoing, it’s fine really.

KALTBLUT: Songs like “Sorry” and to an extent “Body Love”, do they come from individual memories?
Megan: A lot of our music is quite personal and it will be a sign of the sum of our experiences or… People we know or even just conversations.

KALTBLUT: Conversations between you two?
Megan: Well yeah that’s sort of where it came from just sharing, that’s what I think comes through in the music is that it’s very open, kind of intimate.

KALTBLUT: Agreed, so with your fans are they going to see some merch? New videos?
Megan: Sorry, you said merch? Like Merchandise, oh, yeah uhh… we have some shirts and I think beanies are in the works.
Lily: It’s taken some real getting used to the idea of a “webshop”
Megan: Yeah, like, someone wants merch and we’re like oh. Hold on we’re the shop.
Lily: We’d have all these boxes to send out and making sure it was all good and handled well. It’s still kind of funny really.

KALTBLUT: Well I do hope there are more videos, the video for “Pulse” is really cool, one of IDER’s best so far I think. How did that come together? Who shot it?
Lily: It was with a friend, Lewis Knaggs who Meg went to school with, that was all still very early days when that video came out but Lewis still had a lot of footage in his back catalog and just goes off when it comes to effects and what he does.

KALTBLUT: To finish up I’d love to ask, what festival you’d like to play most in your career?
M&L: Glastonbury.
Lily: Absolutely, there aren’t nearly enough female artists that headlined that. I could look it up really quick. Okay so there’s Florence and the Machine, there’s The White Stripes.
Megan: Why is Adele not in there? Fact check, fact check it.