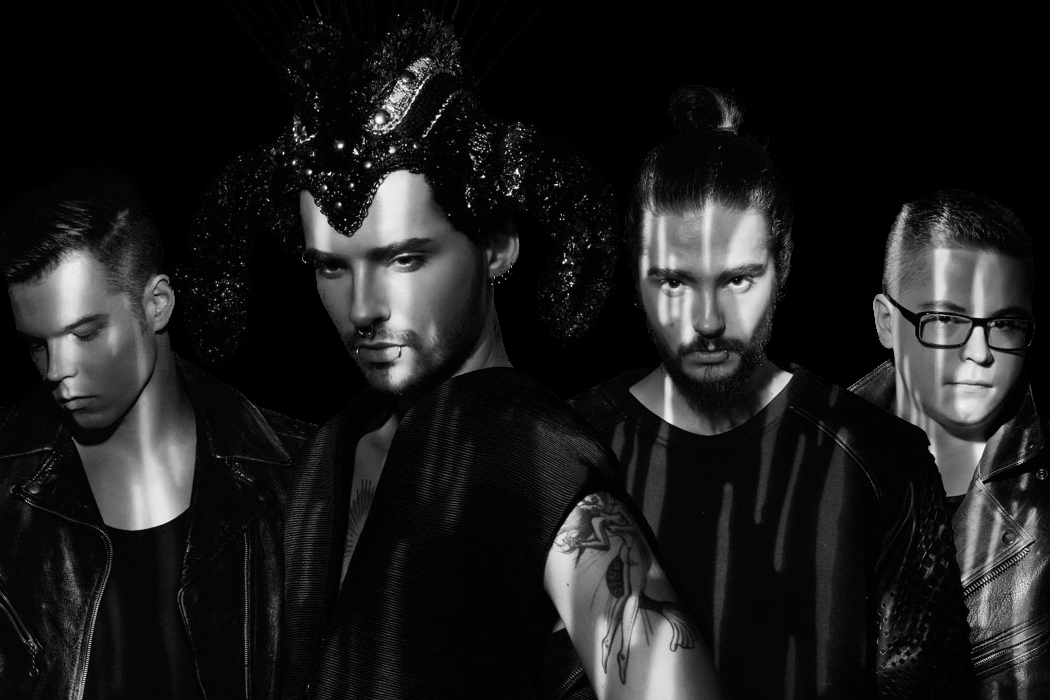 “Love has no gender or religion, no borders” – Tokio Hotel told KALTBLUT as we chatted about their new album “Kings of Suburbia” [Island Records] and their upcoming world tour–“Feel It All: The Club Experience”–due to kick off in London next week. Inspired by the wanton debauchery of their newfound home in downtown L.A, Germany’s favourite lost boys Bill & Tom are finally all grown up–as are their teenage cult following–but do they still feel like aliens? 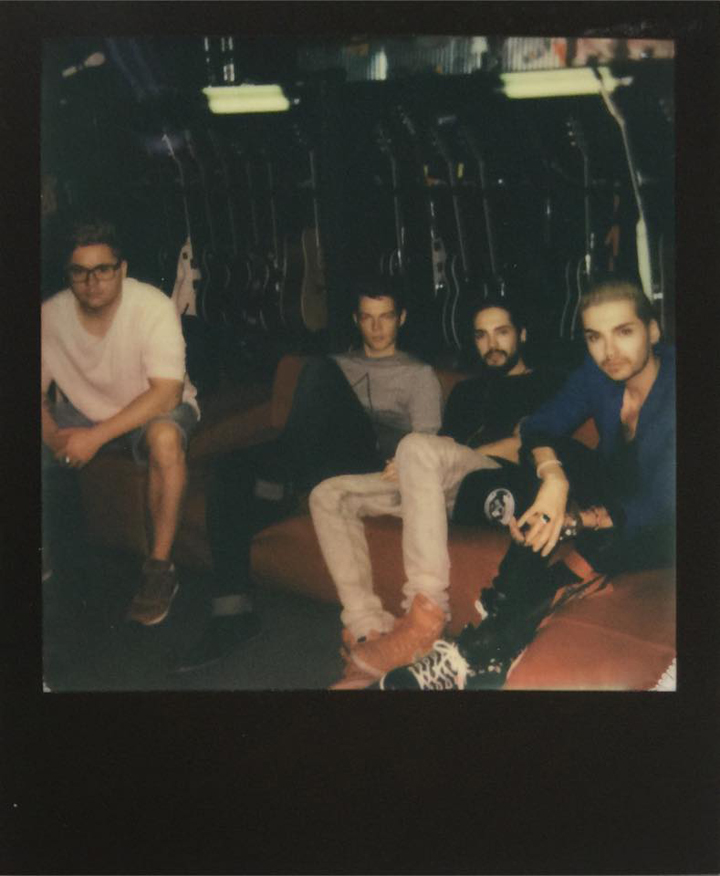 Tokio Hotel during our interview – Berlin 23.02.15 Photo by www.the-impossible-project.com

If the latest visual offering for “Love Who Loves You Back” is anything to go by, they’re now 25-years-young, frequently dark corners in Berghain-esque nightclubs where the rules to which they could never succumb do not matter, in fact do not exist at all. As they encourage fans worldwide to revel in this delicious boundary-free sphere, will they finally plug the void which MySpace friends once used to fill?

KALTBLUT: How did you record the new album?

Bill: So Georg and Gustav were still living in our home town, they still live in Germany now. Me and Tom moved to L.A. so we weren’t working together all the time, but we got to meet in the studio together for band recordings and live recordings. They came to L.A. once in a while, other times we would go to meet them in Germany.

Bill: Yeah I know, but we were constantly working on it. We wrote a lot of songs. There were so many songs that didn’t end up on the record, and we’d rather put less songs on there so we could form the perfect album. We decided to put eleven tracks on in order to do that. We also wrote a lot of songs that we wrote for ourselves that we will save to offer to other artists as well. That’s something we wanted to do anyway, produce for other people too. 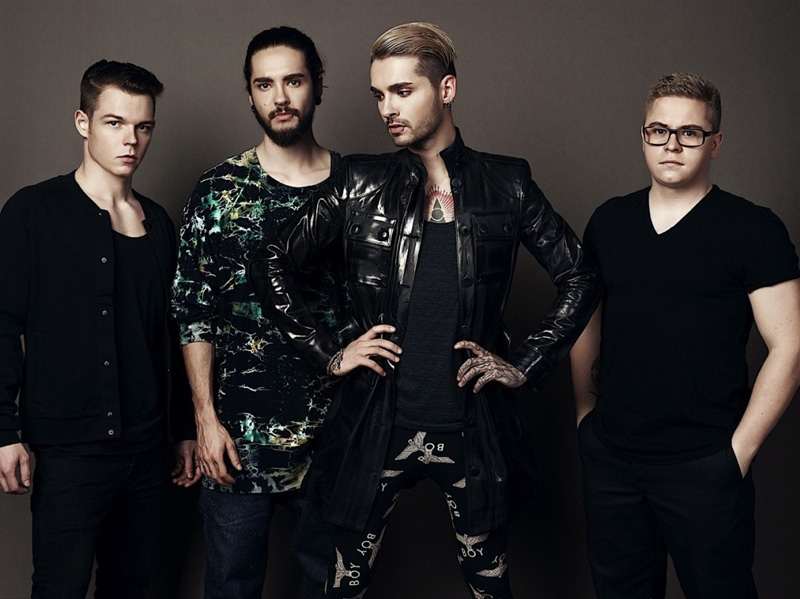 KALTBLUT: What kind of other artists are you thinking of?

Tom: Oh I don’t know, it’s like in general we enjoy good music, so at the end of the day I’m not thinking in any specific genre or anything like that. For me it’s like I can enjoy that it’s good production, no matter what type of music it is – I can enjoy a good pop song, a good rock song, I like every kind of music as long as it’s well made. I’m 100% open to new ideas.

KALTBLUT: It must be important to find a new direction after being together for so many years?

Bill: Oh yeah, definitely. Especially after the last album we needed a break and a change to get new inspiration because we didn’t know what we wanted to do music-wise. We’ve said it all, we’ve done it all, we were kind of like tired and didn’t know what to do. We didn’t just want to make another album that sounds the same. So we just thought we need to live our lives a little bit to get inspired.

KALTBLUT: Is that why you you decided to move over to L.A.?

Tom: Uh huh, yeah. At the time for me it was super hard to live here in Germany because of privacy reasons. We always had fans and people following us, we weren’t able to go out without having security. So each time we came off from a tour or wanted to get a break we were heavily guarded, it was like a prison. We couldn’t go out and get inspired! We really needed that change. We realised we have to have a life too. I guess when you’re young you don’t really realise. I remember we were coming home after three years of constant touring and I didn’t really know what to do because I had no life. When you’re constantly on the road you don’t realise it, but when you come home it hits you and then you can fall into a black hole. So the reason we went to L.A. was for personal reasons, and then we started to feel like we wanted to work on the record and take our time, be creative, not feel pressure from the label. We just wanted to write and work as producers.

KALTBLUT: Do you think that moving to L.A. and your experiences there shaped the new album?

Bill: For sure, we started a whole new life.

Tom: It totally worked out for us.

Bill: It was the best decision we could have made. I mean, we’re still psychos! But I think on a personal level, I don’t know what would have happened if we had stayed in Europe. It was one of the best decisions we ever made. 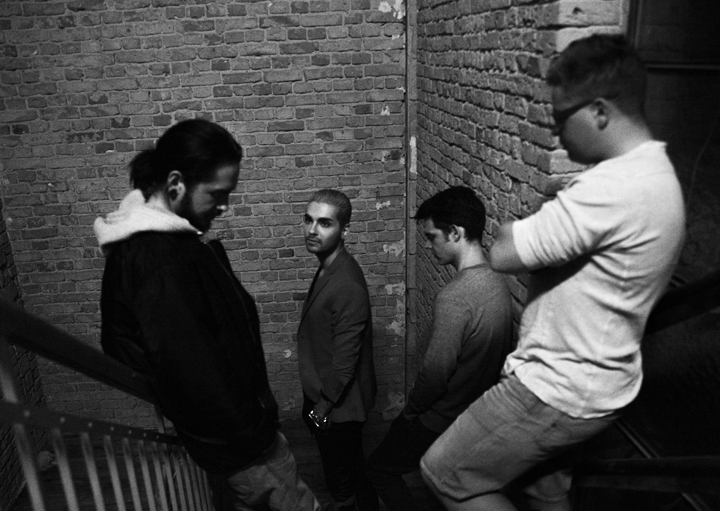 KALTBLUT: We were really surprised when we watched the video for “Love Who Loves You Back” – it almost feels like a typical Friday night out in Berlin! Were your new videos purposely intended to be provocative?

Bill: People asked us, because we released all three videos before the album came out and we got confronted with “Ah everything is so sexual!” and we didn’t even realise! Every time we make decisions it’s super spontaneous and out of pure instinct, so when we wrote those songs I already have a concept for the video in my mind. I always have a pretty keen idea of what I want to do and for “Love Who Loves You Back” I wanted to make that video for a long time, even when we were making the last album, but it just wasn’t the right director and it wasn’t the right song. I always had that idea, so when I wrote that song I just knew that the video was meant for that. The idea inspired by a movie called “Perfume” directed by Tom Tykwer. I wanted to take the idea into the video, but instead of perfume, we used music – because I feel that’s the message of the song. It’s like love has no gender or religion, no borders – and I just wanted to bring that across, also in a fun way. I feel like so many people are watching our videos so I wanted to do something like that.

KALTBLUT: So you guys are going on tour?

Bill: We have until the 5th and then we go to London. We are really excited, it’s going to be a great show. It’s a little nerve wracking because when you’ve worked on something for so long, you just want it to sound as good as it can be. Plus we’re a nervous band! We get like super nervous before each show, even after years!

Bill: I don’t think we’re ever going to lose that. I think that’s maybe part of it, but especially if you have a new album and everything, you’re super nervous.

Tom: I wish it would be a little less.

Bill: Yeah but I’m good at working under pressure, most of the time I’m better.

KALTBLUT: So we mentioned on our Twitter page that we would interview you guys, and have some questions from your fans!

Question #1 from Sandrine Tan: Which language is the most beautiful for you guys?

Bill: I love Italian people, I think they’re all beautiful inside and outside. They’re so pretty! It’s a super nice country, I love the whole culture, I love the food, the architecture. The language especially! 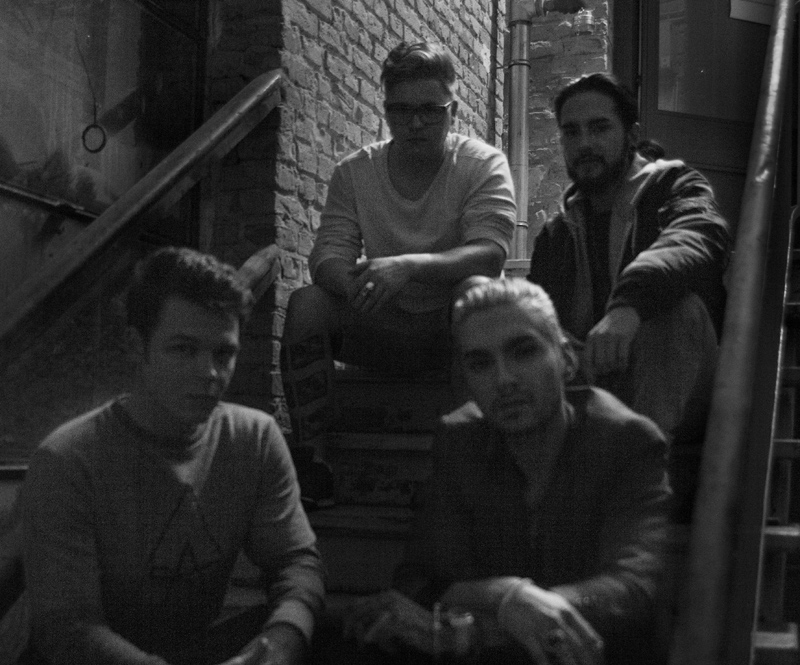 Question #2 from Devyn: What music are you listening to lately?

Bill: Right now I love the song by Lenny called “Because I Love You”. It’s a cool song.

Tom: There’s another great song called “Shadow of the Sun” by Taped Rai. Like somebody will come across a cool song and then everybody goes and buys it!

Bill: We have to admit that we don’t really listen to that much music when we are so into our own stuff. When you are making music the whole time, like right now we are running a set or two sets every day which means we play almost 42 songs. By the end of a session like that you are so tired of listening to music because you are concentrating on your own for so long. I also think the new Ellie Goulding song is very good. 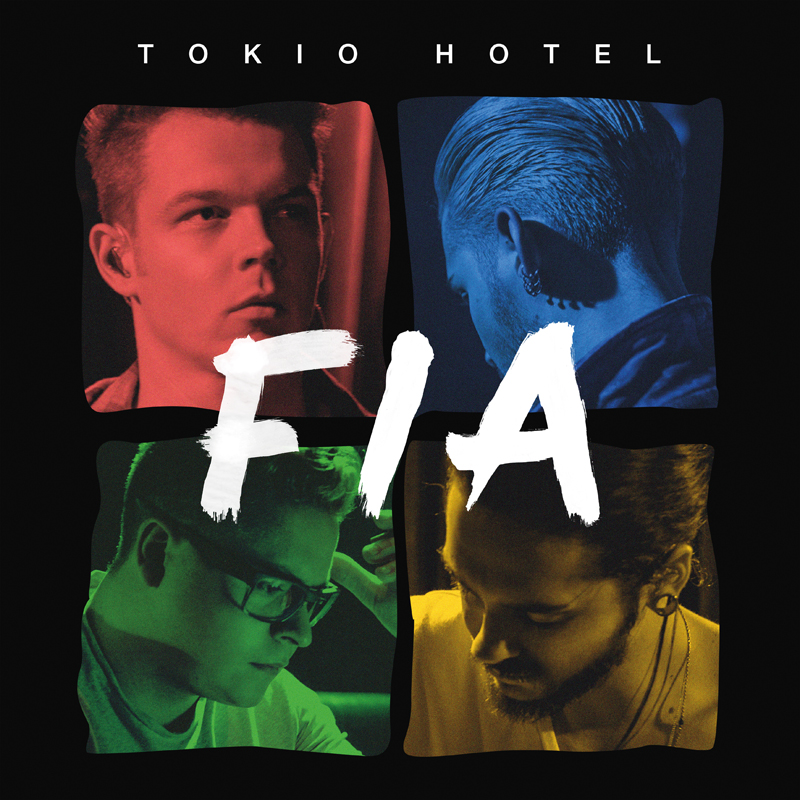 Question #3 from Elizabeth Joseph: How long did Georg and Gustav know each other before meeting the twins?

Georg: It was not too long, it was like a year or something. We just clicked.

Tom: And it clicked especially when they saw us together in the club, like they wanted to join our band so bad! [Laughs]

Question #4 from Whitney: Which of your new songs are you most excited to perform live?

Bill: I think now that we are into rehearsals, the opening of the show is going to be great. I don’t want to give away which song that is! [Laughs] I really think “Stormy Weather” will be great live.

Gustav: I think “Masquerade” will be really good to play live.

Bill: “The Heart Get No Sleep” is going to be cool too.

Question #5 from @TokioHotelFans: What can the fans expect from the new live show and tour?

Bill: Now that we are in the process we are excited to finally share the record with people. It’s like performing it in front of people, you can see them and see how much they enjoy it.

Tom: They can expect a lot! We tried to fit a great production into small venues and we are going to bring a lot of new stuff to the tour. It’s going to be a really special show. We wanted to create something that’s not been done before.

Bill: So we tried a lot of things, we tried using a lot of different instruments that we are not used to playing; keys and piano. There is so much programming and processing and new technique that goes into the show that we have never done before. I don’t think anyone has done before! We have great lighting and video production, just a completely new concept that we’re really excited to share with our fans.

Tom: It’s a real project, it’s a project for us as well you know. Especially putting the music together and transporting that onto stage and using the different sounds in a fresh way. There are a lot of technical aspects in there and we have to rely on it as well, so we will have to see how it goes!

Question #6 from Shabnam Zareen: I am an ‘Alien’ from Bangladesh, would you ever come to my country?

Tom: I want to go there for sure!

Bill: I would love to! This year we are going to travel the whole world, we want to play everywhere so maybe we will go to Bangladesh! 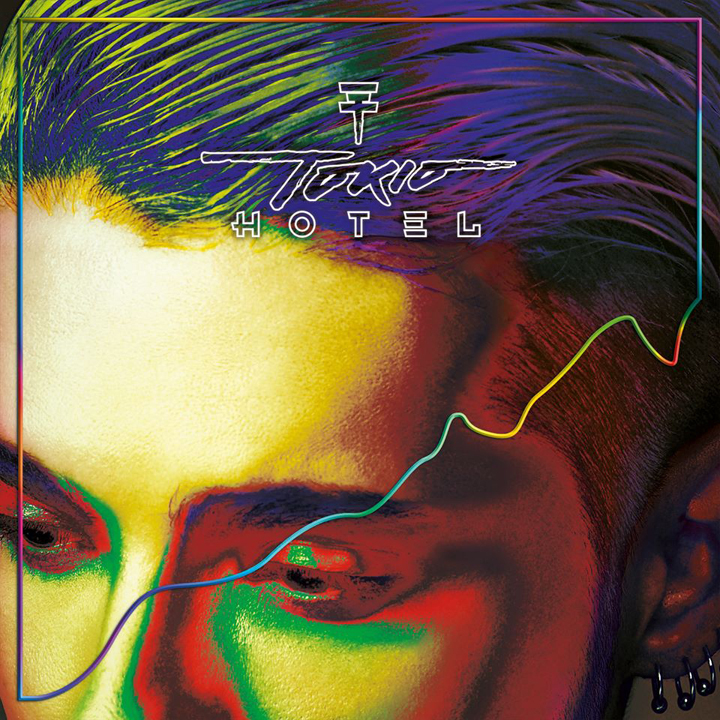 Tokio Hotel’s new album “Kings of Suburbia” is out now to buy on Itunes and stream via Spotify: itunes.apple.com/de/album/kings-suburbia-deluxe-version/id913360003

The ‘Feel It All’ World Tour kicks off next week, 6th March, in London UK, tickets are limited but you could still grab some for London, Paris, Barcelona and Germany! 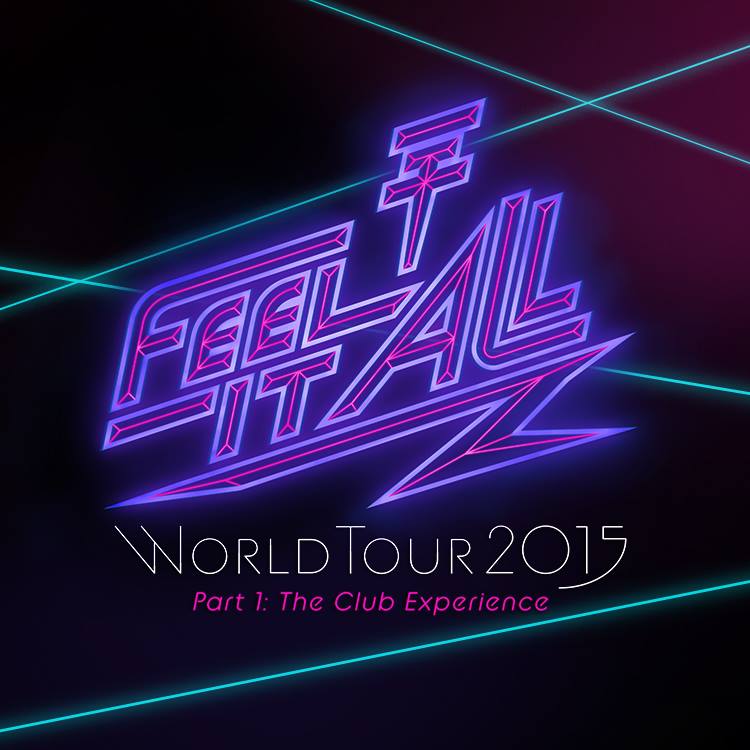 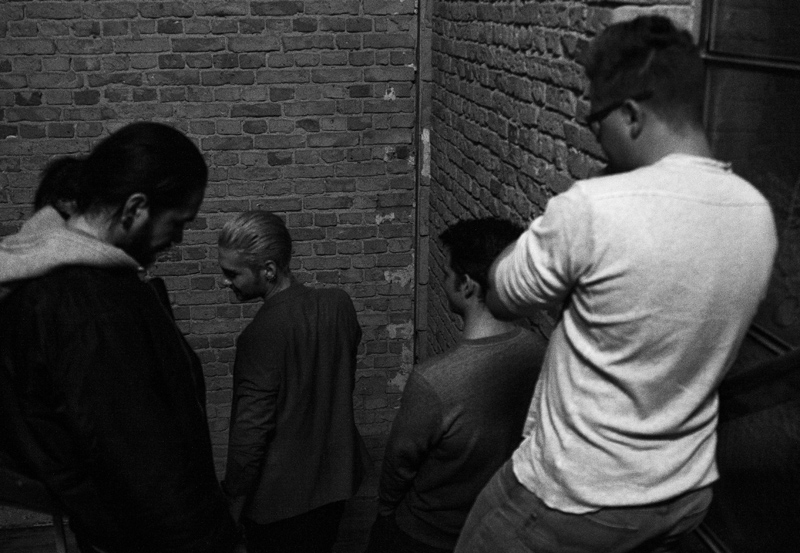 We giveaway 2 original polaroids from our interview with Tokio Hotel.
The winners are: 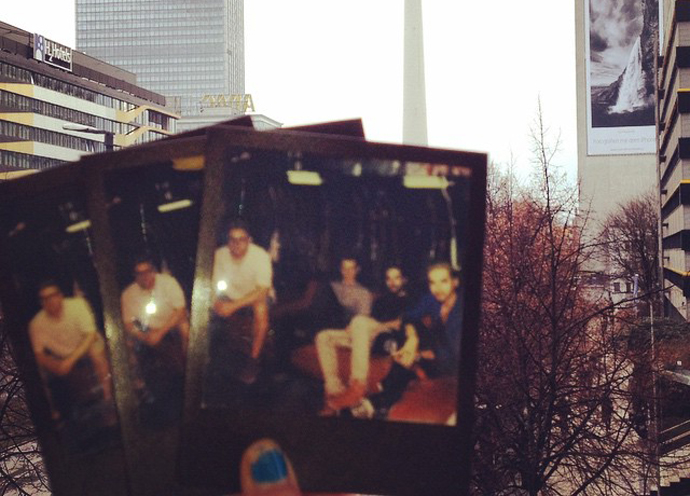 Hey #Aliens and Tokio Hotel Lovers. Thx for sending us over 2500 emails to get one of the two polaroids from our interview.

We played lottery to find the winners.

And the 2nd one to Karolina / Poland alias bill21

Sorry if you are not the one who get´s a photo. Don´t be angry with the winners. Be happy for them.

Plus special thx to www.the-impossible-project.com .. they gave us a 3rd polaroid and that one goes to Oksana Glowings alias @GLOW1INTHEDARK for your amazing art work!