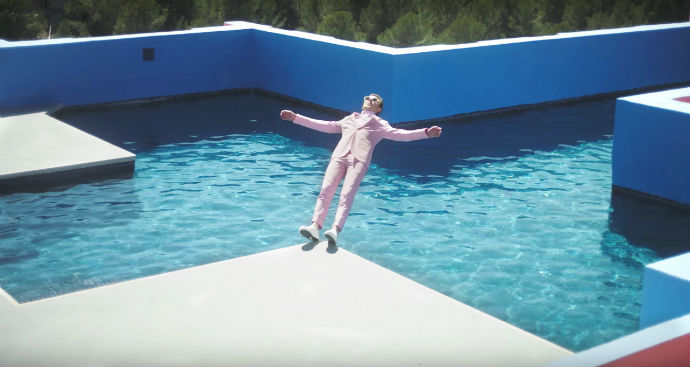 Sunday is finally here again, and we’ve gathered the weirdest and most wonderful videos that have been released this week for your viewing pleasure. Witness Fritz Helder being fierce as hell, Martin Solveig climb the beautiful La Mural Roja with Tkay Maidza, Jorkes party with some pork, Mabel show off the new London Tate Gallery and D∆WN teleport you to space!

Martin Solveig – ‘Do It Right’

Following up from his chart topping hits, ‘Intoxicated’ and ‘+1’, revered French DJ Martin Solveig has released his latest single, ‘Do It Right feat. Tkay Maidza’. The accompanying music video which is set in Alicante, Spain is directed by Parisian filmmaker Mr L’Argent. The visual is laced with colourful aesthetics from start to finish and features Spanish architect, Ricardo Bofill’s La Mural Roja (The Red Wall). Built in 1973, the fortress-like structure houses 50 apartments with a rooftop swimming pool, solariums & sauna and plays host to Solveig and Maizda’s antics in the video. Mr L’Argent’s aerial and panning shots in the video displays the complexity of La Mural Roja in its entirety whilst the musical duo both pay compliments to Bofill’s use of intense colour – particularly Solveig with his collection of colourful suits.
@MartinSolveig

Munich producer Jorkes busts out his sexy new track on the young Freeride Millenium imprint, with a video that certainly pushes a lot of boundaries. “It is the simple situation that although you have company you feel you are in total isolation. The selfmade dungeon – surrounded by humans that are stuck in their own dungeon. You play in this game. The price for it is that you become the lowest common denominator of the others. You become an excerpt of yourself. just because you need the company of other humans. Isolated, because communication is not honest and real anymore. Communication is like the things that surround us: mechanical, technical, a swipe, a keyboard to hectically type in. With your eyes communication is pure emotion. Feel the other, observe, becoming one in the act of communication. This is how humanity grows. By exchanging emotions. When you give yourself in.”
@Jorkes

Video Premiere: Maze & Lindholm – ‘Where The Wolf Has Been Seen – Part III’

Rising songwriter and artist Mabel has created a video project to commemorate the opening of the new Tate Modern building. The video is directed by acclaimed choreographer Holly Blakey (Florence & The Machine, Jessie Ware) and the song in the video is an original composition for the project created by Mabel specifically for this special collaboration. The video is reflective of Gustav Metzger’s Liquid Crystal Environment 1965, remade 2005 which is displayed within the new Tate Modern. The colourful, psychedelic patterns produced by light displays such as Metzger’s became icons of London’s cultural scene in the 1960s, as musicians in particular sought to create total sensory environments for the appreciation of their work.
@Mabel

D∆WN – ‘Not Above That’ VR Experience

D∆WN’s Machinedrum-produced track, ‘Not Above That’, taken from her upcoming album ‘RED*emp*tion’, has been given the VR treatment video. Co-produced by VR Playhouse, the video can be opened via your phone’s YouTube app, where you can obtain the full 360 experience of being teleported into space! D∆WN writes, “As an entrepreneur I’ve always had a vision to expand music beyond the linear frames. With this release, we’ve done just that. This VR experience not only transports you to a CGI world but also includes spatial sound that will elevate your visual and auditory senses. Indie just took huge strides. And we are proud to be among the first to do it.” Berliners, catch D∆WN play tonight at Berghain.
@D∆WN