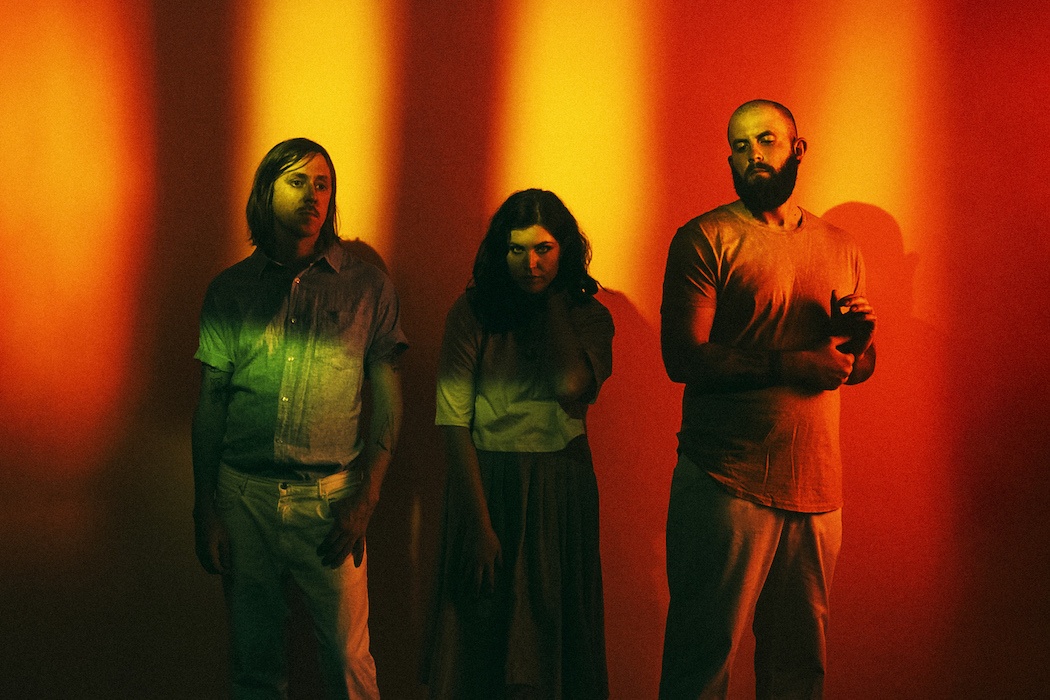 Melbourne-based trio Howlite craft sublime, cinematic dreamscapes – a much-welcomed escape from reality at this moment in time. Their debut EP Reasons was released in 2016 and instantly climbed the iTunes charts, followed by a string of singles that garnered acclaim from Rolling Stone, Mushroom and spins from Triple J, community radio and U.S college radio. After their pillowy-pop delights further intoxicated audiences, including Spotify’s New Music Friday in Germany and Switzerland, and Spotify Fresh Finds, the trio naturally moved onto their next EP, ‘Not Here’. We asked Alison Thom, singer and songwriter for Howlite, to take us through the 6-track journey from start to finish just after the EP was released on October 16th.

Canary
“Canary was also an older track that came about in 2017, but the lyrics are sort of a callback to a period in my early to mid-twenties. I had the chord progression of the first verse and the opening line floating around for a long time, and I liked the idea of having a really empty chorus – just one line disappearing off into the ether, unanswered and alone. This song was heavily inspired by Marika Hackman’s EP “That Iron Taste”; she chooses really unusual, almost metal/grunge chord progressions and the songs have a really dark, ethereal quality. I liked the metaphor of the canary – pushing myself onwards into the darkness – or being manipulated by others – testing things, trying, failing, getting hurt, struggling. The song is about not knowing who you are in relation to other people – changing yourself to try and fit in, wanting to be accepted and loved, but then also losing yourself in the process or sacrificing a bit of your integrity. And kind of wondering why you find it so difficult to engage.”

Stranger
“Stranger is an older song – I wrote it back in 2014 or so – and it started out like a ¾ nu-folk Mumford and Sons hoedown. Awful business. But I liked the chord progression and the feel of the song, so I spent the next few years changing it slowly. We were performing a live version of it as a band in 2017, but it still wasn’t quite right, and it was only after listening to lots of trip hop and really minimal production for about a month straight that I got the idea to scrap the whole framework and start again. I changed the time signature and used a straight, sampled beat, which was largely inspired by Massive Attack’s “Live With Me”. We recorded vocals first and from there it was a process of layering the track and creating the vocal hook, which I made by accident playing around on my loop pedal. Lyrically, the song has stayed the same throughout – it’s about my mother, our family’s experience of mental illness and growing up immersed in it and in spite of each other. She and I didn’t have a strong relationship for many years, and this song was a point of realising how I’d been a selfish teenager, and didn’t fully understand what it was she was going through until I later experienced it for myself. Ultimately it’s a song about empathy, and believing the other person’s experiences as valid and acknowledging their struggle.”

Infancy
“Infancy was the first track I wrote after releasing our first EP in 2016. At the time a lot of people I went to high school with were making engagements or pregnancy announcements on social media, and it was a bit confronting to see these people moving on to the next stage of their life in such a physical and permanent way. The song is about me dragging my heels a bit, being quite reluctant to grow up and accept responsibility, and the fear of having to rely on yourself when you still feel like a child – there is a sense of longing for the past and delaying the inevitable. Initially, the song was musically inspired by Daughter’s second LP “Not to Disappear”, and it started out quite shoe-gazey, with lots of delayed guitars and breakdowns, but it moved into a more succinct pop sphere as we experimented more in the studio with our producer JP Fung. I wanted the song to feel quite elating, a kind of confident display of my lack of confidence! It’s okay to not feel ready, and to feel intimidated by life. We’re all muddling through together.”

Reducer
“Reducer was a late addition to the EP; we had sent the initial 5 demos off for our producers to review and I was mucking around in Ableton late one night, and ended up writing it in about 20 minutes. My intention was to put it towards a third EP, but when I showed it to the band there was a really strong positive reaction, and ironically, it has been our most successful song! Structurally it is very simple – I wanted to build up a melody around as few chords as I could and see how much range I could build into the vocal line. I love using vocals as a backing instrument – the idea for the “oh’s” in the verses came in the studio from one of our producers, Tyson Fish. Once we had that rhythmic foundation, the song found its identity very quickly. The song is about having a person in your life who is a source of comfort and calm – your anxiety reducer! My sister has quite severe anxiety and will often ask me to attend events with her as a human safety blanket, and I will often call on my partner Ben (our guitarist) to do the same for me. I quite like the idea of being a physical presence of support for someone, and how much it can mean to just hold someone’s hand and show them that it will be okay, that you’re there with them.”

Olympia
“I wanted to create a powerful, more mature track that talked about femininity and being a woman, and also feeling in control of yourself. This led to some researching and discovering the painting Olympia by Manet; a nude woman looking directly at the viewer, which was taboo at the time. I loved the idea of this model taking ownership of her body – confronting the viewer who previously was able to take a voyeuristic approach to nudity. The context changes when there is consent or awareness. I really ascribe to the idea that feminism, sexuality, gender and social equality are ideas that should be allowed to exist in all forms – there is no wrong way to exist or portray yourself, so long as you are comfortable and enthusiastically consenting. Ultimately, the song is about how Olympia would exist as a woman in the 21st century – having photos online for people to view, creating a curated “self” for public consumption. The duality and the complexity of it, and the importance of feeling self asserted and in control of your image. Musically, it is a darker, brooding kind of track and I wanted quick-fire lyrics in the verses to relay the message.”

Blood Type
“Blood Type is another song that started life quite differently; it was originally quite a rhythmic acoustic guitar track and didn’t really lift to where I wanted it to be. I was listening to a lot of Timber Timbre’s 2009 album when I wrote it, and I really loved the creepy organ sounds they used – completely unique and enthralling. When it came to post production and tracking drums, I was in love with Billie Eilish’s album, and we looked at incorporating a lot of really interesting arrangements to create drama throughout the song. Like most basic white women, I listen to a lot of true crime podcasts and I’ve always loved horror movies and darker material, and so I was interested in writing a track about the idea of death. I wanted to use imagery of returning to the earth like going to sleep in a forest, the morbid beauty of it. From there, the song evolved into quite a sinister thing; for me, the idea of being stalked by someone and unable to escape them, even in death, seemed completely terrifying. And so there is a reference to the myth of Eurydice and Orpheus, but also the idea of a more visceral, animalistic pursuit, like a hunter or omnipotent presence. The song also deals with the idea of our fear of death, our struggle to let things go and accept mortality, accept loss and failure.”

‘Not Here’ is out now: howlite.news/not-here