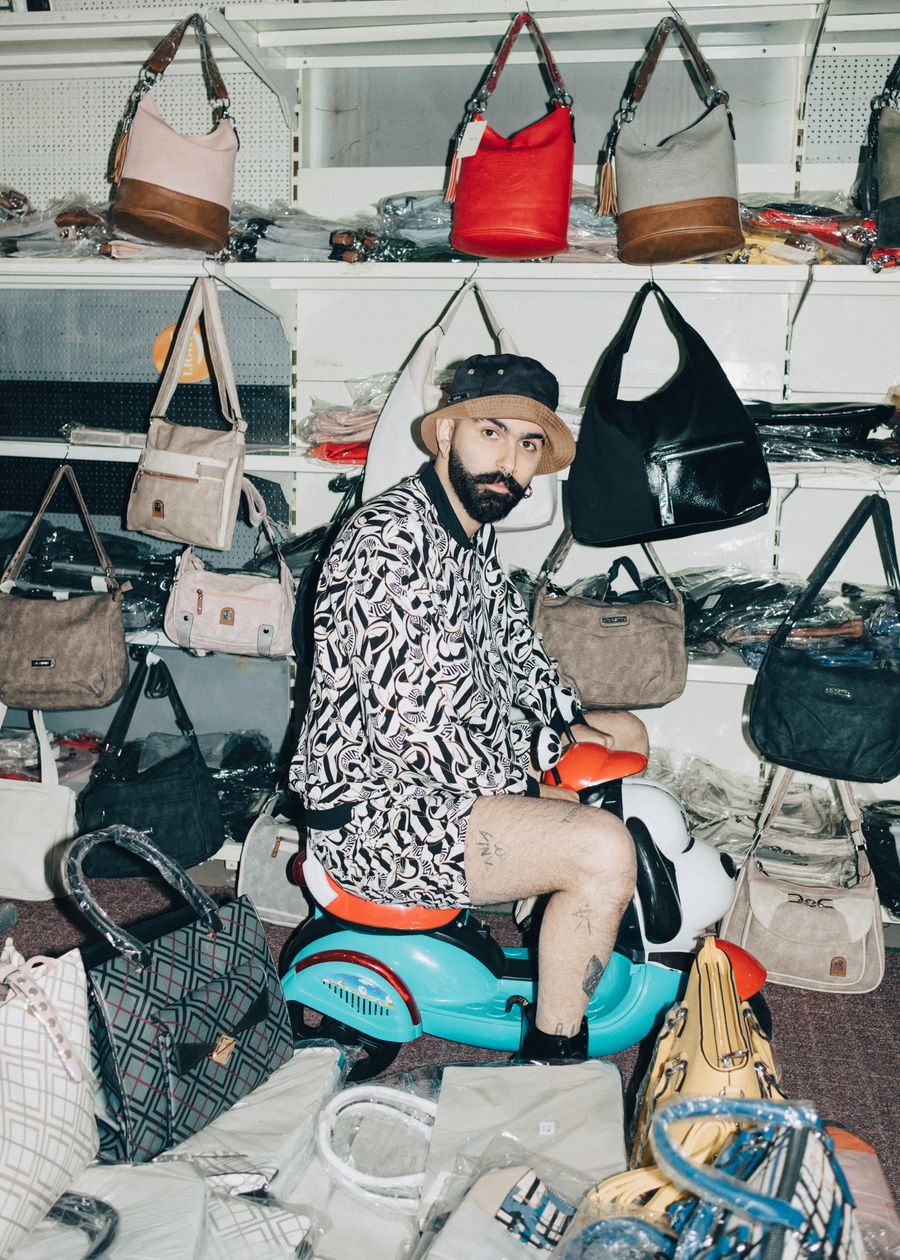 Track By Track: ZOUJ guides us through his debut EP TAGAT

Adam Abdelkader Lenox, AKA ZOUJ, has released his debut EP TAGAT via City Slang on June 29th. TAGAT, which means “curse” in Tamazight” is a collection of previous singles, such as “Fl00te”, “St00pid” and “j0_0j”, and new singles. Laced with destructive lyrics, its nine tracks blend obnoxious percussion and obscure sound design at the intersection between organic and synthesised. Albeit having a touch of darkness, the mixtape is sugar-coated with a colourful sound palette of quirky analogue synthesisers, catchy radio hooks, addictive bass lines and R’n’B vocals.

The son of a Morrocan mother and an American father, Lenox grew up in the suburbs of Paris before relocating to Leipzig with his mother at the age of 14. It didn’t t take long for him to make his mark, rising to fame in the European noise DIY scene with his band Lingua Nada. Far too playful, weird and ambitious for the mainstream, the band toured Europe non-stop for five years and gained a dedicated fan base. However, the limitations of the scene he found himself in were too narrow for Lenox, whose restless soul yearned for something more personally and musically. And so, he started his own scene.

We caught up with ZOUJ, who gave us a detailed rundown of his debut EP TAGAT. Read the track guide below.

1. o͡͡͡͡͡͡╮༼;´༎ຶ.̸̸̸̸̸̸̸̸̸̸̸̸̸̸̨̨̨̨̨̨̨.̸̸̨̨۝ ༎ຶ༽╭o͡͡͡͡͡͡   (ten of swords)
The opening track of Tagat is based on the tarot card ’Ten of Swords,’ which is basically a guy being impaled by ten swords. That is basically how I imagine being impaled by 10 swords in ultra slow motion would sound, while asking myself some last-breath philosophical questions such as “how can we die in peace if we were born from wars?”

2. Embryo 2
I have an odd fear of dying in a bag and I sometimes dream about it. They always wrap people up in a grey bag in movies and I find it really sad. If made me think that – If I ended up in the mortuary zipped up in a bag – I started my journey as a genderless embryo which didn’t´t have a big role in society until they cut the cord. Since then I had to be in a dude body and act like one, only to end up in a bag anyway. This isn’t me officially coming out as gender fluid, but seriously it’s worth questioning.

3. Fl00te
This is actually an angry song. There was a lot of thing happening in my political work (when I was pro-active) and in my own development that made me angry. Fl00te contains the word loot. I´ll let you do the math.

4. Anxious Sleep
Since I was a teenager, I’ve experienced a sleeping disorder known as “sleep paralysis”. In some cultures it’s thought to be a connection with the dead, being possessed by a demon or an alien abduction. The symptoms are interesting and people can experience sleep paralysis at points in their life for different scientific reasons. Your body is paralysed but your brain is still kind of awake. This results in dark “dreams”, the sensation of waking up and feeling your body being paralysed while hearing indescribable voices and sounds. For me, it feels like my subconscious plunged me into a pool where all my demons are swimming, waiting to creep back up once I´m awake. Maybe the undefined voices are reminding us that we have some unfinished business buried somewhere deep in the back of our heads?

5. ಠ_ಠ ☐☐☐☐☐ (I Only See Squares)
‘I Only See Squares‘ is about exactly this: if you still use an old Nokia phone, every time someone sends you an emoji as a text you only see squares. It was also an experiment on arrhythmic rhythms produced by modular synthesis. I thought it was quite fun.

6. j0_0j
This is he first track I wrote for this project that made me feel like igoing in this musical direction was worth a shot. The absurd smiley “j0_0j” translates as “Jouj” which means “two” in Moroccan Arabic, which gave me the name of Zouj, which also means “two” in a different dialect. Throughout the the song an up pitched alter ego keeps saying “jouj, jouj”. It was inspired by a moroccan tape from the 90s called “Wahid Junior”, where a severely autotuned child voice is the lead singer. “Tears of joy, my heroes are dead, they weren’t what they said” : for me when a certain awakening happened from within, whether it was a change of perspective or realizing something I thought was true all my life turned out to be the opposite. I felt like I left a world I knew and the people that were in this world entered a new realm or something.The disappointment of the world I knew and the understanding and relief from the realm I found is represented in the line above: torn between crying of joy or of pain knowing that I’ve killed my so called heroes.

7. Lefty
What would a record made by a simple human with average an IQ be without some kind of love song. Some kind because it’s not a break up song and it’s not some Beatle pathos. I´m not the type that likes the chemical reaction of being in love and projecting Hollywoodian expectations in my own brain which were forced in there as I was fed trash TV since I was a toddler. So I just get weird, find it uncomfortable and I act ike I have two left hands. So it’s not a love song. It’s more like an apology. I wouldn’t write a love song as I find my so far heterosexual normative “love” experiences being quite an irrelevant, boring topic which already has a trillion songs affiliated to it.

8. St00pid
This song is about killing my ego in order to learn from others and the things around me. Essentially acknowledging my ignorance and making “stupid” mistakes in order to grow. It´s also about an abstract meandering flow of thoughts and the fear of being separated from these thoughts or not having the time to process the world around me. Being obliged to work a day-job in order to afford a living “like an adult”. In a capitalist society, having the aim to not work for money just so I can stay in my own mind would be qualified as stupid.

9. (╥╯⌒╰╥๑) (Arcanum Of Death)
This track was made spontaneously while mastering the record. I sat on the piano and rigged my modular because mastering sessions are hella boring. My old friend and engineer was like “yo lets record that, it sounds interesting,” so we plugged in the vocoder/vocal fx so I could sing what I had that very moment. Two takes later we ran the piano through a delay pedal and blasted inside a tape machine and that was that. Maybe to remind ourselves that we are still wild and spontaneous? In any case, these little episodes make me very happy, so it’s staying on the record as an ending.