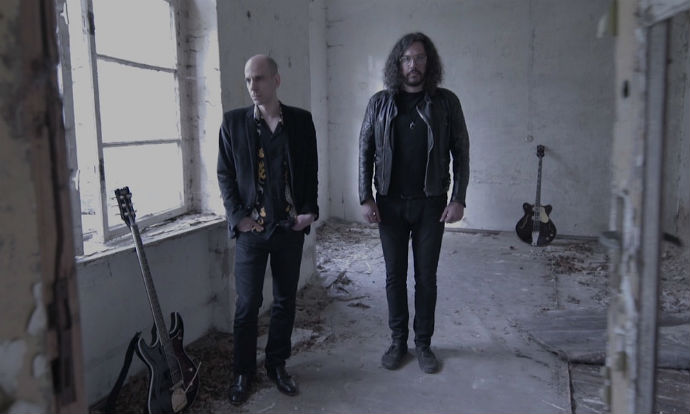 Filmed in an abandoned building in Berlin, ‘Hot Summer’ from Greek born, Berlin based duo, 2 by bukowski, is a sensuous and hypnotic track with a gorgeous drone-like effect throughout the song. Over 400,000 Greeks have left the country since the crisis 9 years ago, with artists and musicians among those searching for a job anywhere in the world where they can utilise their skills. Shooting ‘Hot Summer’ was the occasion for family and friends to meet in Berlin after several years of trying. The making of the video is in a way a tale of five cities. ‘Hot Summer / Beast’s Breath’ is the duo’s first new music since 2005’s Yzordderex, and is the first of three 7″ singles that the band will be releasing this year via Inner Ear Records.

In May 2017, musician and actress Elena Charbila, better known in the musical world as Kid Moxie flew in to Berlin from Los Angeles, 2 by bukowski’s guitarist George Malamidis from London, director Isidora Charbila from Edinburgh, director Petros Ioannidis from Athens and 2 by bukowski’s second member Achilles Charbilas, stationed in Berlin, didn’t fly in from anywhere, but drove to the airport four times to pick each of the others up. Every morning for the next few days the crew and equipment would squeeze in Achilles’ well used Ford estate and drive to abandoned East Germany buildings to film, risking life and limb and being met by the wrath of local security forces. Every evening Achilles and George would visit Berlin bars to contemplate why the rest of the team wouldn’t go out drinking after a day’s honest work. So the making of the video for ‘Hot Summer’ is also a story about it being a very 2 by bukowski affair (bars) and about social curiosities such as the absence of some of those involved from said bars.