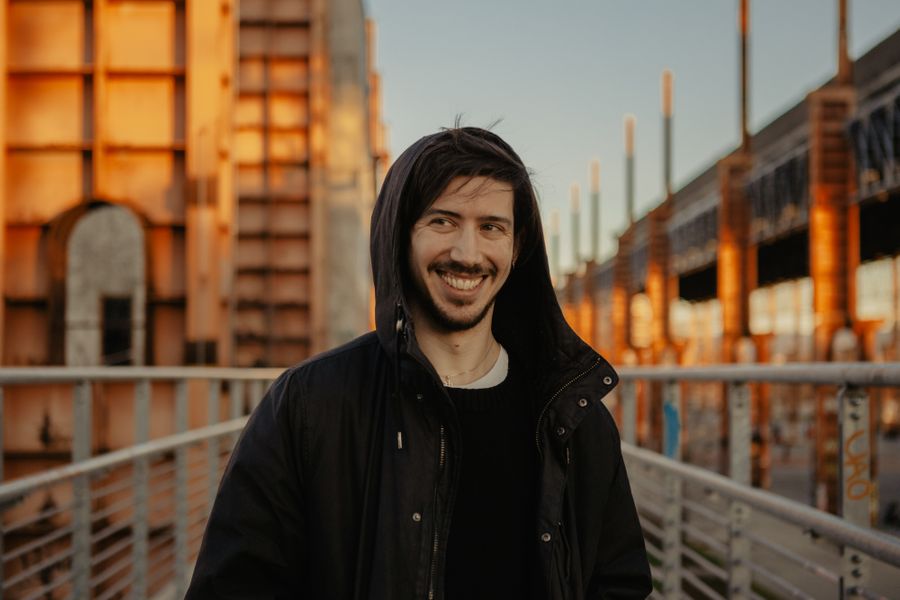 Sound producer, designer and audio developer Stefano Fagani aka Stèv has just recently released his album Dismantle and Refine via Variables. Across the album’s ten tracks, the Italian artist explores the intricate relationship between electronics and nature, computer programming and simplicity. Dismantle and Refine is an exploration created by Stèv to expose the creative power behind technology, while showcasing his ability to explore the lines between genres and sounds.

The track “Breath Stretch Training” is accompanied by a virtual reality music video created by Carola Demarchi. About the video and her collaboration with Stèv, she said: “I have been collaborating with Stèv for Variables for many years, and I find  it quite natural to give a visual form to his music now. After the work on the artworks, they asked me to think about a video. I’ve been working in VR for a couple of years and the next step was been pretty straight forward. Drawing all the scenes in the virtual world allowed me to be even more immersed in his music and to go deeper into my the imagination than i had in mind, and eventually i really enjoyed the process. The various scenes which were drawn in virtual reality used an HTC Vive Visor, along with 3D brushes which are music-reactive to blend further with Stèv’s track and then edited in Unity. The tech choices allowed me to be physically present in the visual and audio space we created. I was also able to have real interaction with the song, in the VR world, allowing the emotions and sensations I felt to intensify”

We caught up with Stèv to talk about his album, the stunning video for “Breath Stretch Training”, which you can watch below, and his findings about the relationship between nature and technology.

KALTBLUT: Hey Stèv, thank you so much for taking the time to do this interview. How are you? How are you getting on with the slow reopening of everything after the lockdowns?

Stèv: Thanks for having me! Although this pandemic happened at the end of an already pretty stressful couple of years, I can say I’m fine. It definitely felt surreal not being able to attend any events and, despite I’ve been working from home for years now, the walls had been feeling narrower: this whole situation brought to surface a lot of insecurities but, in the end, having to deal with them helped me to get back on track. I’m lucky that I was able to keep being creative and crafting my stuff and I’m relieved I can finally start to make actual projects again, travel a bit and hopefully perform in front of actual people.

I feel that making the relationship between technology and nature explicit is a way to bring to surface the most meaningful contrasts of the record, elevating the emotional content to a more tangible level while making the symbols part of the content itself.

KALTBLUT: Your album Dismantle and Refine explores the relationship between nature and electronics. Can you tell me a little bit about that?

Stèv: My whole lifestyle tends to balance the opposites, in general. I’ve found that my connection to nature and my passion for technology are emblematic of all of the different perspectives I’m always sitting in between and pondering about. This record is probably my work that makes this binomial the most explicit yet, as it investigates sombre feelings and frustration as a function of the research for their counterpart, such as relief, achievement and love. The idea is that the music itself is balanced between synthetic and organic, so as the subject of its exploration is balanced between darkness and light. I feel that making the relationship between technology and nature explicit is a way to bring to surface the most meaningful contrasts of the record, elevating the emotional content to a more tangible level while making the symbols part of the content itself.

KALTBLUT: How would you describe the relationship between humans/nature and technology and how does it translate into sound?

Stèv: Most of the people tend to put nature and technology one against each other, but I genuinely feel the two can easily live together and feed each other in order to build a better world and create beautiful art. What I aim to do is using gears, software and artificial behaviours to create a music that’s electronic on the surface but filled with organic shades and a warm character. I’m always aiming for that sweet spot where I can describe my deepest feelings in an understandable language while being able to experiment and bring different ideas, concepts and techniques into the composition process.

KALTBLUT: You’ve collaborated with other artists in the likes of Lueda Alia and Julien Mier. How did those collaborations come about and how does your approach to producing a track differ when you’re collaborating with another artist?

Stèv: Each collaboration on the record is really special and happened very naturally. I have a different kind of connection with each artist in the album: some of them like gimlii and Lueda have been fostered throughout several years of working together and mutual support, others like Rawz and Julien were born from my interest in their work and my desire to get in touch with them. I genuinely believe that an album like this wouldn’t have been possible without such sweet collaborators and am deeply grateful for them.

When I work with other artists, whether them being fellow musicians/producers or singers/songwriters, I usually go through the music more than once, bouncing the track back and forth with the respective collaborator in order to create something that feels representative for each of us. I tend to guide the project a bit more when the collaboration happens inside a record of mine though, just because I keep working on the material for an insane amount of time afterward.

KALTBLUT: “Breath Stretch Training” was created with the visual artist Carola Demarchi. What can you tell me about that collaboration and what effect do the visual effects have on the music?

Stèv: “Breath Stretch Training” is the first track from which the record originated. I started writing it during my latest stay in Tokyo, back in 2018, and I even got to work on a portion of the tune along with Andrea ‘Sollo’ Sologni, who provided a strong creative inspiration and helped me with the first arrangement, during the summer of the same year. The track became then an iconic choice when the collaboration with Carola started. She designed all of the artworks of the album, along with the respective singles, and spoke with me about a possible VR music video, which got me very excited! We thought about using it to expose the creative potential behind technology and the dialogue between trees and computers: the track, which is itself organic but pretty synthetic and electronic, got enriched with a virtual reality world that is both natural and filled with polygons, digital but also enveloping. Thanks to Carola and its amazing style, the video (and the record itself) got projected beyond its sonic dimension, amplifying the plethora of balanced contrapositions that I originally wanted to describe.

KALTBLUT: What was your favourite and most meaningful track to produce on the LP?

Stèv: That’s a tough question to answer, but I can say that “No Privileges” is probably the track where I put the most intensity into. While writing and releasing the record, I had to face different challenges and I can still hear them all resonating inside that tune. At the same time, when working on a record, my creative routine is usually spread across many months, jumping in and out different tracks all together, therefore I think each of them has some of the same intensity and shades that are in all of the other ones.

Buy or stream Stèv’s album Dismantle and Refine on Bandcamp