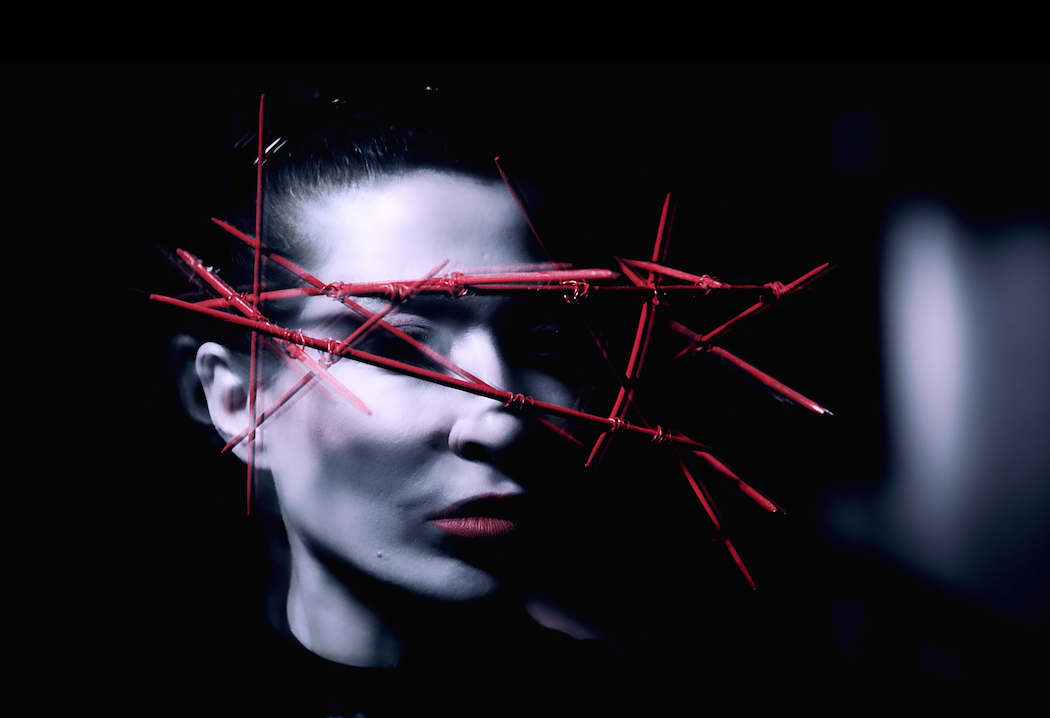 Berlin-based multidisciplinary artist Arya Zappa presents ‘Falling‘, the second part of a dream inspired ‘Dark Windows’ trilogy. With her voice taking center stage, Zappa confidently tests the limits of her self-being, breaking and then reconstructing her identity one layer at a time. Charged with a darkly erotic pulse that invites the listener to reconnect to their deeper parts of sensation, her music has almost an ASMR intention. Accompanying the ‘Dark Windows’ series is a 3 part short film that further expands on the psychojournalistic approach that Zappa’s music tackles. In the John Tattersall directed video for ‘Falling’, Arya is stalked by a voguing apparition played by Apollo Garcia, who dares to try and through her off her course.

Arya Zappa, “’Falling’ is the second part of the Dark Windows trilogy – a surrealist/avant-garde musical short film based on my dream diaries. The director John is is a fantastic cinematographer, with an unconventional approach and impressive improvisation skills. Dark Windows is very personal, it’s about my personality traits and shadow self, expressed through the different characters in the film. Part two ‘Falling’ depicts the unconscious dance between me and my shadow self, played by the amazing performance artist and dancer Apollo Garcia. I love his performance, makeup and body protheses, all made by himself. He’s a fascinating artist and character. We shot all three parts in only three days with a tiny team that literary performed a miracle. Falko Sixel who directed the first part ‘Cut Grass’‘ helped us together with Sam Peach who’s another great cinematographer with the lighting, focus pulling and other technical issues on the set, Nick Münster who edited the film did also a great job as camera operator. Long story short I’m incredibly grateful and happy about the result.”

Director John Tattersall, “We’ve worked together on another one of her projects before so as a cinematographer I know things will get colourful, and a little chaotic maybe, but she’s a producing machine and the important stuff, the visuals, outfits, props, performances, locations I know she’ll have sorted those in spades by the time I turn up on set. She knows what’s important, and she knows I’m ready to kind of embrace the chaos and keep it together as the rest of the crew start slowly falling down around us in exhaustion and piles of empty Red Bull cans. When she told me during prep that the story was a précis of a long running dream diary, I knew then that the film had a strong guide, her dark subconscious, and we just had to follow it no matter what. These cinematographic leaps of faith are what really excite me in my work and sure enough Arya is militantly honest and protective enough of her vision that it does work. For me the film recalls those clear moments in dreams when colours are simplified and the protagonists are messengers. These little jumps occur in the film’s story world, yet the atmosphere remains, just like in dreams. I felt that we preserved that phenomenon in the film. I knew Arya took her vision of the dream diary content seriously and would fight for it in the filming, which freed me to stay completely focussed on the abstract aesthetic, rather than worry about whether a prop or colour or frame made sense. It’s very honest, as Arya is, ruthlessly, and the story makes sense through this honesty. This film is a graft from some part of Arya, and it was fun challenge to project that onto the screen as purely as I could.”