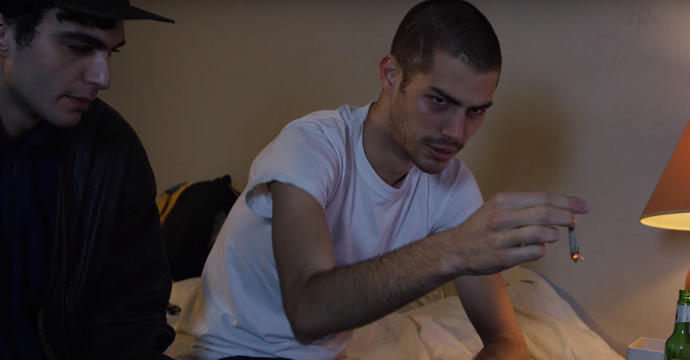 Camboy [‘kam ,boi] noun. 1. An internet term for men who are featured on webcams. The word is commonly used for men who earn money by broadcasting, entertaining and performing on webcams either from homes or studios. Do I have your attention? Great. Now enjoy the latest visual installment created by Cesar Love Alexandre for French visual artist and singer/songwriter, Guilhem, aka Velour Modular.

A few words from Cesar Love Alexandre on the video
“STRUCK is a story about camboys, boys that get « tokens », virtual money, by filming themselves doing various types of activities the viewers asked them to do. It is about the relationship our generation entertains with technology, especially concerningself-image. Our main character is a camboy, who’s filming his entire life through his computer. It’s about his relation to this activity and how it slowly evolves from being just for fun to being an actual transaction, a job. It also explores the ideas of gender, sexual orientation, and stereotypes that are evolving nowadays and becoming blurry, through the freedom of expression and exhibition internet offers.”

Guilhem teamed up with German producer Phon.o (50 Weapons/Monkeytown/Bpitch Control) for her latest two-track single titled ‘Struck / Turpentine’ which is out now on Cr2 Records