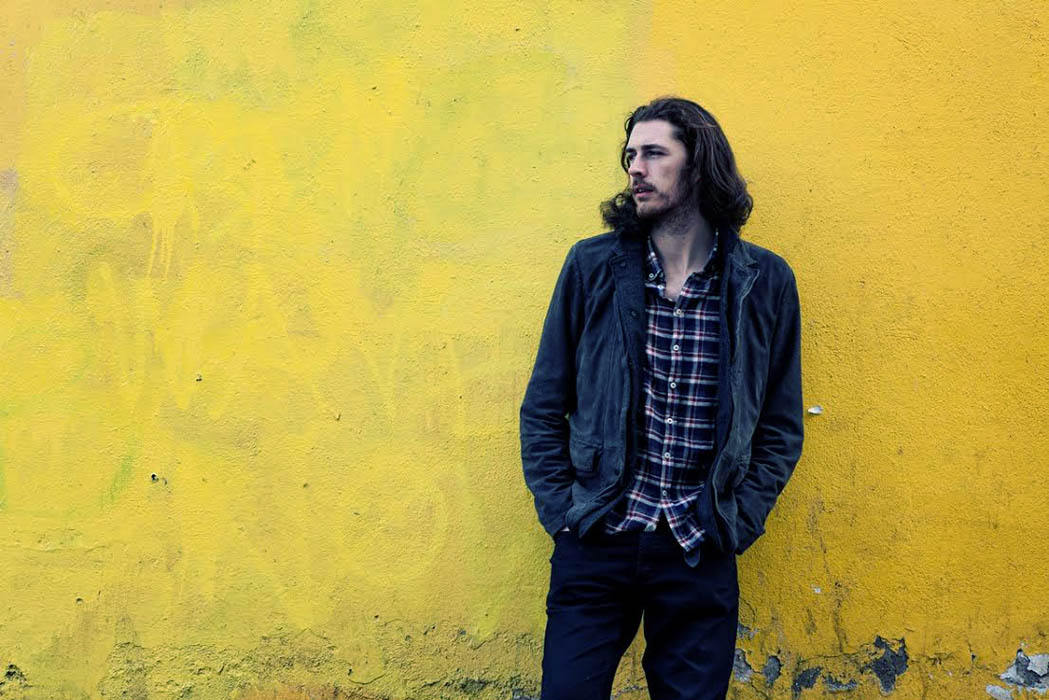 Andrew Hozier-Byrne, better known as Hozier, dropped out of his music studies at Trinity College to sign his first deal with Universal Ireland at the age of 19. The song ‘Take Me to Church’ turned into a global phenomenon, reaching over stunning 100 Million views on YouTube, something he said ‘he never expected to happen’. The song is being played on many pop  and commercial radios around the globe. The humble and passionate singer-songwriter from Ireland sells out shows in the US and has been honoured by artists such as Bono or Ed Sheeran. I met Hozier in Vienna ahead of his show in Gasometer to talk about life, religion, human rights and of course his  music.

KALTBLUT: Once playing in local pubs and cafés, now taking the music scene by storm over the year of 2015, seeing audiences multiplying from hundreds into thousands of fans over time.  How do you feel about such an enormous success?

HOZIER: My life has changed enormously in the last 2 years and I am thrilled by that. I feel very fortunate that things took off like they did. ‘Take Me to Church’ was an enormous success. Still I do not want to think too much about it. I am eager to move to the next album and to keep it on.

KALTBLUT: You are one of those artists who has created compelling meaning to your music. Your songs convey strong messages, you are not scared to speak openly about our problems we face in modern society.  Did you ever face difficulties for being that open and direct, or even having a sharp tongue, if I may put it this way?

HOZIER: Yeah maybe. I think I choose my words carefully, certainly in interviews. If I had approached the label with some of the songs and the video ideas that I had at the time I don’t think that it would have happened the way it happened. It was kind of  a grassroots thing. We made the video and the song at a very small budget at the time and it took off from person to person. It was an online sensation. It was then when labels got involved and interested. I was lucky the way it happened, people got on to it first… I didn’t expect it at all. When we first did ‘Take Me to Church’ and some of the songs of the album, we didn’t think that it would turn into such a success. So there was no reason to worry about what people would think. We were talking to a very small audience or no audience at all. Thus there was no worry about being controversial. It was all by chance.

KALTBLUT: In ‘Take Me to Church’ you speak about homophobia and  the sad thing is that you speak the truth. When writing it you had “Occupy Pedophilia”, a radical anti-gay group from Russia that subjected gay teens to abusive treatment, on your mind. What was the intention of the song?

HOZIER: The song and the video are deliberately linked but they were conceived of different times. The video certainly references  ‘Occupy Pedophilia’ in Russia, those attacks and anti-gay propaganda laws that were passed by Russia. But the song itself was more about the church. The first ideas of the song were definitely about the church and the legacy of the church in a culture that it cultivates. It is an organisation that institutionalises an aversion to homosexuality, it institutionalises gender inequality and it speaks from a place of teaching people being ashamed of their sexuality and I suppose that is big part of the song.

KALTBLUT: Where there any difficulties when spreading the video that shows two men kissing on television and the internet? What were the first reactions?

HOZIER: We had no difficulties with the internet because the internet doesn’t censor but we had issues with television. MTV and VH1 wouldn’t play it. Pretty much lot of music stations won’t play it, much to my frustration. There were no issues about sharing it or people being overly sensitive about it. There wasn’t all that much controversy about it.  Some people were more shocked at two men kissing in the video then about the fact that one man might die at the end.

KALTBLUT: In ‘The Meaning of Life’ with Gay Byrne you criticised the Catholic Church for “sticking their noses” in people’s sexuality and relationships. Your frustration with the Catholic Church and its stance on homosexuality is visible. Do you think that art and music would be sufficient enough to change our system we are living in, the Catholic Church or even the mindset of the people ? And can we reach this human equality one day?

HOZIER: Two difficult questions. I think our music is a fantastic vehicle for ideas, they can be a fantastic vehicle for new ideas and disseminating them.  You have consensus as well and that ‘carry and capture’ society consensus and a feeling of the time. Art and music are the vehicle for the zeitgeist. I would image that we are moving more into a political age of songwriting, at least  I hope so, just with the success of people like Kendrick Lamar and lot of hip hop artists, too. It is not music or art alone that changes anything, but it does capture that feeling and it can bring it into the forefront of cultural thinking.

Will there be a time when equality will exist? I think given human nature there will always be conflict. I am optimistic don’t get me wrong but I think humans are driven by othering people, by defining themselves by who they are not and who is different from them. Human beings are in love with othering. I suppose that’s kind of what ‘Take Me to Church’ is about as well. Justification that homosexuals are the others.

KALTBLUT: The song ‘Cherry Wine’ has a delicate, pretty, almost romantic melody, tricking some of us into thinking it is a light and playful song. But with the song you are sending a very powerful message to the world yet again. What does ‘Cherry Wine’ truly mean?

KALTBLUT: Is there any personal connection between the themes of your songs and your life?

HOZIER: Of course it is personal connection. It always starts from a personal point of view. But I try not to be overly autobiographical.

KALTBLUT: The video is part of the #FaceUpToDomesticViolence campaign project, with proceeds from purchasing “Cherry Wine” going to various domestic violence charity organizations. It must be a great feeling to help. Is that something that is important to you?

HOZIER: Yeah it it. I think we had the potential to do something positive with this single. There are 22 different organisations around the world involved and the proceeds are going to those organisations. The trouble was that we could not find a global initiative. We wanted to be something that is global, not just UK or Irish charity, hence why there are over 22 organisations. My manager does a lot of work in Ireland with an organisation protecting children. The statistics continue to shock. Domestic violence is something that hasn’t got away, especially this year there are a lot of new stories . It is a continuing issue that needs attention.

KALTBLUT: You have a very busy schedule now and it seems that you don’t have time for yourself. Where do you get your mental energy and inspiration these days?

HOZIER: You don’t.  Part of the trouble is that there is not a huge amount of time and there isn’t a lot of mental space. You get a few hours on your own. Its busy. Ideas keep coming, so am looking forward to working on the next album.

KALTBLUT: What would you most probably be if you were not a musician? An activist?

HOZIER: Yeah maybe so. Lot of the songs do deal with social and political issues. Not all of them do but I am simply motivated by social issues. I am interested in society and culture. I probably would have become a psychologist, I love to do a research in this field.

KALTBLUT: What’s next? What themes are coming next in your music?

HOZIER: For me it is not picking issues. Whatever comes, whatever influences me. I am excited for the next album. I ve  got some ideas and I am very thrilled by that but I can’t give you any examples.

KALTBLUT: Is it true that you posted your tel. number on your Facebook on the day of the album release? This is a crazy and a very cool idea at the same time. What did people want when they called you?

HOZIER: I had an old American phone. Lot of fans, lot of female and male fans calling up saying hi. At first people didn’t think it was real, they thought it was a joke. So lot of the time you get somebody in kind of a stoned  moment of silence saying ‘ehhh, uhhh’, being shocked. Lot of the time they were teenagers who were in between classes saying ‘I am late, I am late for gym, class….’. I suppose that people weren’t really sure what they wanted to ask, so it was just really cool. It was fun to do that.

KALTBLUT: You call yourself a feminist. You are against sexism and fighting for equality. What is is for a man to be a feminist?

HOZIER: I think if more people would understand how simple and what really feminism is, I would imagine that most men I know are feminists without verbalising or saying so.

I am absolutely behind equal rights but I am also bridging the gap between cultural mentality and society’s mindset as there are huge amount of gaps that need to be addressed and progress needs to be made. Yeah I am a feminist, it is not a difficult thing to explain.