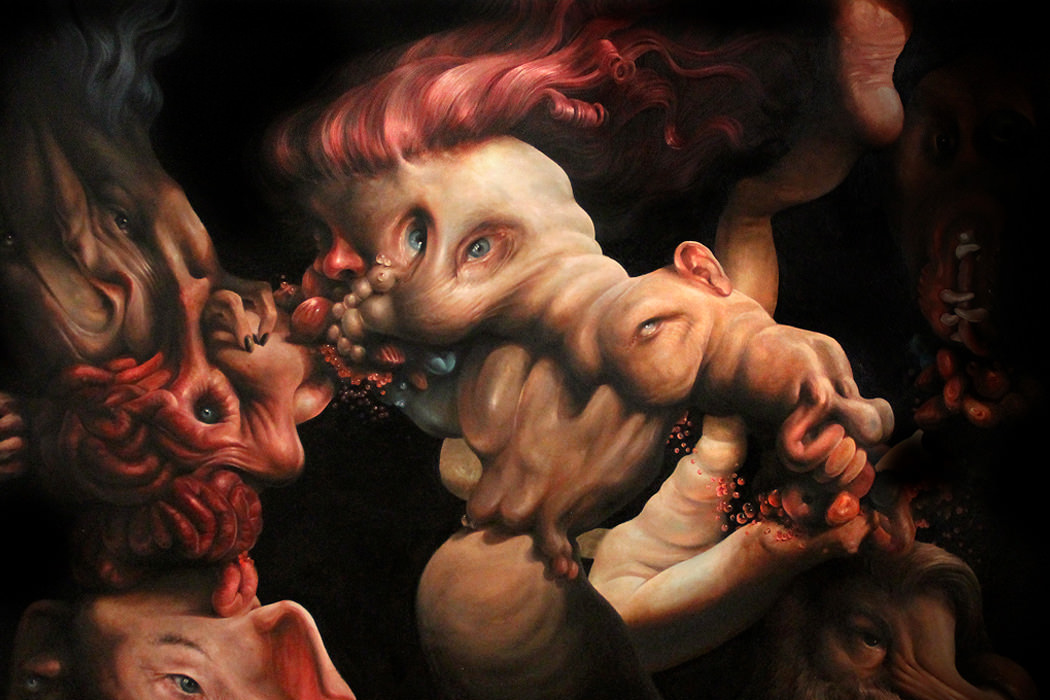 Artist of the week: Horacio Quiroz

I meet Horacio during my  last trip to Mexico. I was so impressed by his painting: really strong pictures, really strong stories behind it. During our meeting, I discover a very lovely person, and it quickly became easier for to understand his art. If you actually are in Mexico, make sure to see Horacio’s next exhibtion: Sneak Peek into Love and Fear.

KALTBLUT: Hi Horacio, how are you?

Horacio: Hi! I´m very good and excited to have this conversation with you.

KALTBLUT: How has been this year to you? You’ve been showcased in the last art week In Mexico City, how was that?

Horacio: It is going very good. Yes, during February the art week took place in Mexico City, and this week several art fairs such as Zona Maco, Material Art Fair and Salón Acme took place. My work was exhibited at Salón ACME which is a platform for emerging artists without representation and under-recognised artists with galleries. The fair is an open call  judged by a council that included recognized artists and curators. I took part with an installation named “Wall of fear and love”, made up with more than 50 drawings that emulates the walls of my studio where sketches, drawings and quotes are placed randomly as time goes by. It was my first time in an art fair and it was a great experience to spend time with the people, artists and collectors that attended to the event. The press reviews were good and my piece was sold, so I can’t complain about it!

KALTBLUT: You have also been selected to participate in the XVII Bienal de Pintura Rufino Tamayo (XVII Rufino Tamayo Painting Biennial), tell me about that

Horacio: Yes, I’m incredibly excited to be taking part! La Bienal de Pintura Rufino Tamayo is one of the most important artistic events in Mexico. It is a space that highlights the current direction of Mexican painting, promotes emerging talents and curates the evolution of established artists’ careers. For me it’s a pleasure to be part of this ensemble of such talented painters. The opening will be in Oaxaca on November 25th, at the Contemporary Art Museum of Oaxaca and the exhibition will tour various locations throughout Mexico for over a year.

KALTBLUT: You used to actually work in an agency as graphic designer, right? And then you just decided to stop to focus on your own thing. Why?

Horacio: Yes, I worked as an art director for 12 years in some advertising agencies. At the beginning it was fun to work there, I learned a lot from colleagues, clients, and working trips, nevertheless I felt that my talent wasn‘t coming out. In advertising and design you create messages according the client’s brief and that wasn’t enough for me, I felt the necessity to express my own ideas and my personal point of view of life through art. On the other hand, I was sick of the “office worker” way of living; traffic jams, belonging to the corporate world and the hierarchy.

KALTBLUT: When did you begin to paint?

KALTBLUT: The precision of your painting is really impressive, how did more toward surrealism?

Horacio: I like to work on details and I am a stubborn person, so I guess it has to do with that. The surrealism I really don’t, know, it just happened.

KALTBLUT: Who are these people that you’ve drawn?

Horacio: Some of them are portraits and some others are no one in particular. For me it’s not important who is the person behind the painting but the emotion inside of it.

KALTBLUT: I like to see the human species as a Zoo. At the end we are all different in a way, and this feeling gets stronger when I look at your art

Horacio: Yes, we are all different from the outside, our bodies and personal histories grow through diverse paths – although I think we all share the same emotions on the inside. Actually we are another animal specie on earth, and from my personal point of view that’s one of our biggest issues as the human race; learning to embrace our animal part.

KALTBLUT: Why did you choose the human body as your main subject?

Horacio: I’ve always been perplexed by the human body. It is an amazing and beautiful machinery equipped to walk, think, pee etc… but not just that. The body for me is the container of our spiritual and temporal history. Every single cell of our body is coated with emotions, and we learn to be humans through the material nature of the body, so what I try to do with my work is to incarnate those emotions such as x-ray photographs of the feelings living within.

KALTBLUT: Looking at your work I see distorted shapes and pieces of bodies put together. Can you tell us what the story is behind your art?

Horacio: Every time I´m asked about it I answer in a different way, but I´ll try to explain it to you. I guess the inspiration behind my work comes from the observation of myself and people around me, and what I mean for observation is a deep inspection of the feelings and emotions that make us act in certain way through our experiences with daily struggles. Life itself is distorted for me, the human experience is trapped between emotions, we live reacting among love and fear whether we are aware of our feelings or not. Humanity is capable of the most terrible acts as well as the most loving ones. We live inside this yin and yang and somehow my work tries to reflect about the dark side of it; about the things that as humanity and individuals we deny to see. There is a C.Jung quote I love which illustrates the whole idea, “One does not become enlightened by imagining figures of light, but by making the darkness conscious.” It is therefore why we need to feel misanthropy to become philanthropists and vice versa – the darkness is the seed of light.

KALTBLUT: Is this the reason you named your upcoming exhibition “Sneak Peek into Love and Fear”?

Horacio: Yes, because it’s a small exhibition that brings together a set of paintings and drawings that explore the duality of human existence, speculating about love and fear as the primary antagonistic forces of vital movement. The exhibition is arranged as the name suggests, like a glimpse or preview of work in progress. I’m still actually working away on similar themes and aesthetics to complete the project’s entire body of work. The exhibition opens on September 24th in Galería Progreso (Progreso 33, Colonia Escandon). It is an independent exhibition space of 15 square meters, which promotes emerging, contemporary artists.

KALTBLUT: “Sneak Peek into Love and Fear” will take place the same dates as the Gallery Weekend México 2016. Do you have any tips to give us for that weekend?

Horacio: Indeed, the Gallery Weekend will run between September 24th and 25th. Galería Progreso and my exhibition are not formally part of the Gallery Weekend, so as a tip I’d suggest checking out the other alternative galleries and happenings being held in conjunction with this event, as there will surely be plenty of interesting things to see.