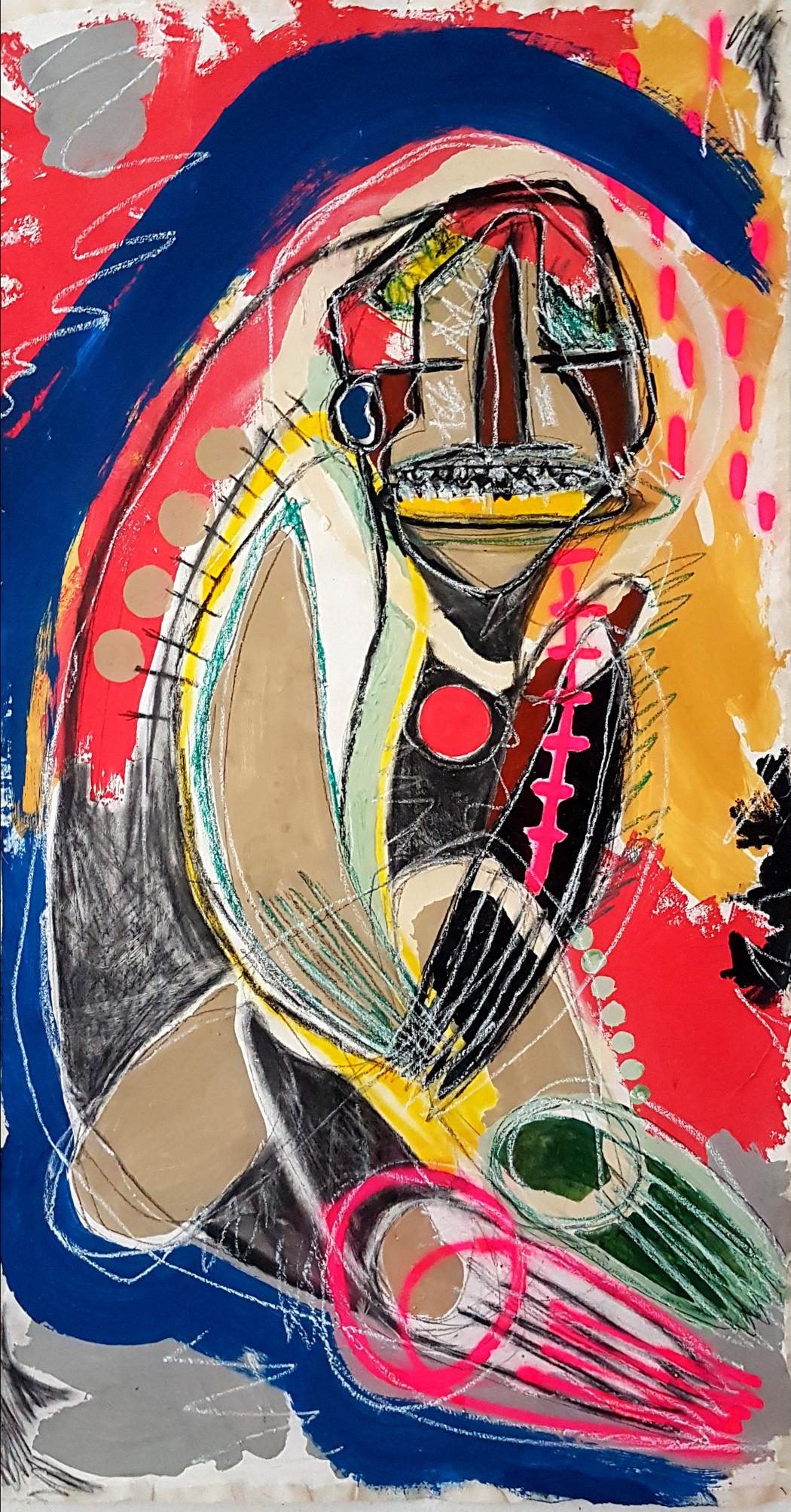 Artist of the Week: Rafaella Braga

Rafaella Braga is a Brazilian emerging artist living in Berlin. As a woman artist, she likes to run away from the softness stereotypical of femininity, always using different materials, working with a striking, strong and fearless trait, highly influenced by the subversive. Braga’s work talks about awakeness and transmutation. Every single piece represents herself and her present feelings, like a way to uncover ideas and emotions hidden by shame or fear. “Because what we most fear is what can revolutionize when transformed into love”.

KALTBLUT: Tell us about your creative background – when did you first start illustrating/drawing and what really pushed you to do so?
Rafaella: I’ve always had this visual thing, for me the lines can be truer than speech and I don’t like to verbalize too much. I was basically that kid who passes the whole class drawing at the table and is disapproved at the end of the semester, so I just decided to invest in it instead of learning Math. I took the drawings from the table to the walls, making some graffiti and pixo. Climbing on rooftops, running in the streets at 4 am were my biggest fun as a kid and first vice. Then I started at age fourteen to take some courses in painting, drawing, theater, and sculpture at a public art school in Brazil until I was seventeen. Then, I went to University for Visual Arts. I did not fit in there. I wasn’t really being given the opportunity to make the works that I wanted to make using the language and approach I wanted to use and I was losing my confidence. To be honest, the tedium there lasted longer than I could handle. If something doesn’t get my spirit high, I just let go. So I left university, started a new job as a waitress to save money, and two years later I went to Berlin.

KALTBLUT:  What medium/tools do you feel most comfortable with when creating your work?
Rafaella: When you are a low-income artist, you kinda learn how to improvise and take advantage of any mediums, expressing with your fingers or brushes, using acrylic paint as much as using wall paint. For now, I have fallen in love with pastels and the way they translate me into a velvety texture. You can’t edit with pastels or start over like in oil painting, for example. Nothing dries, what you do stays exactly as it is. I also like the sprays roughness and how their lines can affront.

KALTLBUT: Are your illustrations inspired by personal experiences or of friends/scenarios you know of?
Rafaella: My work is my cure zone. Since I went through depression at seventeen, I looked for my paintings to reflect my own presence, addressing my physical, psychological, and spiritual experience. Open the intimate was never easy for me, so I always found myself a bit alone. Me and me dealing with life. So I assumed a position of self-protection, like a bittersweet cuddle: a space to tell secrets, confess transgressions and show where it hurts, without judgment, in a very free, fluid and punctual way. A form of self-investigation that helps me deal with whatever happens inside, facing the mundane subjects of the heart. Painting as an extension of fast cars, hummingbirds, dirty streets and neon fantasies. Letting my soul dance by itself.

KALTLBUT:  What is the message you want to get across to viewers of your work? And why is it important to spread this news?
Rafaella: For me, it’s all about the importance to validate more our consciousnesses and document the surrealism of being in a body. Looking beyond the standard beauty and thinking more about expression. I don’t want to be super literal. I want to give people permission to see my work with their own eyes, incorporating their true self when facing my creations. I can tell the history and tools but when they looked at this it is all about their own experiences. In that way, they can see themselves in and we can create a collective heal moment.

KALTBLUT: Has your work been responded to in a positive way? What has been the best reaction that you’ve received so far?
Rafaella: Since I came to Berlin, I am covered in magic. I arrived here without knowing anyone and so far I have connected with many incredible hearts through my art. I remember when I sold a painting called “Os Três Pássaros” to a doctor and he said that I can cure the disease of the world with my art. It sounds very utopic, and I confess that I laughed a bit hearing this from a doctor, but it’s true that at least my art is healing me and this is the first step to change anything else.

KALTLBUT: You’re Brazilian and live in Berlin. How both countries influence your work?
Rafaella: Every new place we step in can awaken, redefine, and affirm aspects of our identity. When I talk about Brazil, I have, on one hand, a bloom and rich culture and, on the other hand, a legitimate violent culture, related to sexuality, race, color, religion, gender, and class. Even more evident now with a fascist extreme right-wing president. I was born and raised in Goiânia, a city in the middle of Brazil, far from the sea, but close enough to the mountains what allowed me to watch life from the top. With a great art scene, but small supportive spaces, it is a very conservative city, surrounded by colonel’s power. There I incorporated a rural and urban mix that still accompanies me here in Berlin. Despite the displacement feeling of an immigrant, I feel there is a lot of me to be discovered in this city. Before I moved here, I felted emotionally dead and Berlin was the first to accept me as an artist. There is something brutal, industrial, beautiful but caustic here, besides the commercial and somewhat hedonistic that makes me feel like I don’t need to follow the status quo. The scars of wars, division, and reunification are omnipresent and make art urgent.

KALTBLUT: Have you found any other work/artists to be really inspiring currently?
Rafaella: There are many young Brazilian gems that represent very well what I miss to see and inspire me to continue creating, the list is huge so I will leave here only some of the precious diamonds: @lais__amaral, @heloisahariadne, @samueldesaboia, @_mr.design, @pedrocks_, @gabrielmassan. And also other babies around the world: @jahsiyaame, @kimarirh, @mfchech.

KALTBLUT: What is your ultimate goal?
Rafaella: I just want to create something that is honest to who I am. The act of making art as a young Latin woman, in a hegemonic white patriarchy society and as an independent artist, self-managed and self-trained, in a system that delegitimate and underestimate this, makes me find myself denying limitations, despite the social mores and norms, going beyond gender construction and female identity, representing those who identify with me. Making more than feeds for the hierarchy of fine art with the academically correct and undoing the doctrines with an idiosyncratic voice saying “Fuck off. I don’t want anyone fucking telling me shit. Hell, at least on this fucking canvas I’ll be free.”