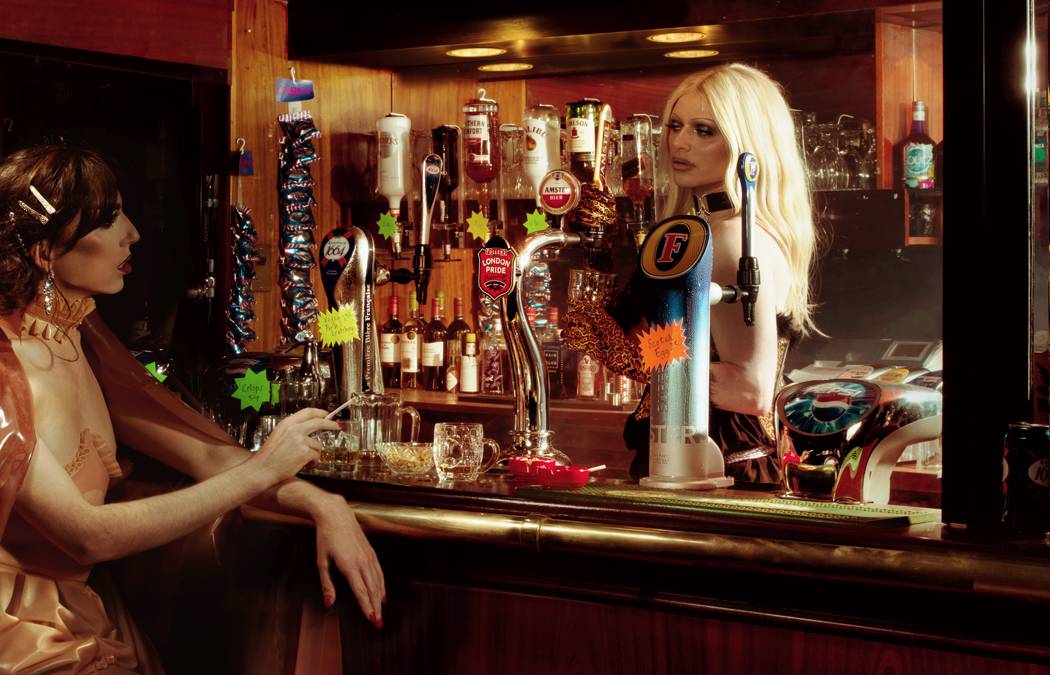 Photographer Eliza Bourner captured these few images of musicians and Drag Artists Bimini Bon Boulash and Margo Margo Marshall. The photographs were taken in conjunction with a video interview and the launch of both of their new EPs and explore queer music and gender performance. As young queers we do as most children do, run around like mad, demand to be the centre of attention and pretend to be our favourite hero, (in my case that hero was Madonna). However, unlike most adults, queers have a knack for continuing this behaviour. Some of us are even lucky enough to make our living from it. I am of course referring to that art form of DRAG!

It’s natural when you hear that four-letter word for the mind to jump straight to Ru and their harem of lipsync-the-house-down-boots-slay-death-drop-split okurrrr ‘ladies’ and with some justification; Rupaul is the current heavyweight of drag and has given a huge audience and exposure to drag. I honestly don’t think I could be a full-time drag performer had the brunches not popped up on every corner closely followed by the Huns. But it is important to remember that it is one type of culture that he is presenting on the show.

Then Bimini came along.

In the recent UK Drag Race Season 2, Bimini marked a new tone for the show: a kid with a traditional working-class viewpoint but a youthful sensibility of modern social awareness, they really are a refreshing 5’6 glass of water.

The first time I met Bimini, they had eyelids up to their forehead, a ratty un-styled wig, and a dream (mainly a dream to shake their ass at a disco at this point but a dream nonetheless). Our drag culture was grotty noisy queer bars in East London, raves, festivals, no air con, no mirror, a ‘can you get changed in the loo?’ kinda drag. We were hustling girls running all over town desperately trying to make a name for ourselves, and eventually, it paid off. But the gigs got bigger and better and our make-up got softer and more… well, in the right place. Swankier venues wanted our skills and we started working for established nights like Sink The Pink and Bushwig Festival. But it was these formative years jumbling around with gender f*ck club kids, Marylin impersonators with beach balls for tits and undiscovered Drag Kings that really formed our acts. Now, as Bimini leaves this gig hustling culture I wanted to hear their thoughts on their drag and how it has influenced them to become a bonafide queer musician.

Margo: Oh my god you’re actually physically here!?
Bimini: YES! I get wheeled out twice a day and this is my second time today!

Margo: Well thank you so much for making this one of your visits. Now, what made you want to start writing music?
Bimini: I think I’ve always wanted to do it and I never thought it would be possible. But then people approached me after U K HUN? Because of my verse, they were like ‘we love that kind of energy you brought and would love to work with you’ so we went in the studio with someone I used to look up to, Vince Kid and their producer Pete, who’s a really super talented producer. We just started having sessions, getting in the studio, writing and coming up with these songs that just feel so authentic to me. It’s weird cause I never thought it was going to happen, but its just happened so organically and naturally. I’m so pleased with it.

Margo: What music influences did you have growing up and how do you think those have affected your sound and look? Give us a little look into the world of Bimini.
Bimini: I would love to say from the age of five I had a taste, but I didn’t. My dad used to call it ‘pop crap’ on the radio like S Club 7 and Steps, and I loved them, they’re super camp pop. But as I got a bit older, as you start developing a bit more of what you actually like, I wanted to start being a bit more individual. A lot of my inspirations have the aspect of telling a story and social commentary. People like Lily Allen are a big inspiration for when I write my music because of the way that she speaks. The things she was speaking about, when I go back and listen to her albums, I’m like ‘good for you girl’ talking about men being shit in bed – no one was talking like that at the time. I also have some weird influences that aren’t queer, from places that were very straight The Streets and Blur, BRIT POP!

Margo: Was there one song growing up that when you first heard it, music ‘changed’?
Bimini: Ziggy Stardust. My dad used to play that a lot and I used to think ‘this is rubbish’ but as I got older and actually listened to it I was like ‘THIS IS ME BUT I CAN’T BE THAT PERSON’. It was about being feminine, wearing makeup, so David Bowie became one I really got into. It’s funny when your parents play you music. It’s never cool, but as I got older I started to appreciate it. So much other 70s music as well as 90s Brit Pop.

Margo: Drag Music is very club based, not even just from girls on the Race, it has been so electronic for so long. But your music isn’t at all. Was there a conscious decision to do that or were you just like ‘I’m going to dive in and just do me’?
Bimini: I think it’s just the universe. I mean we’ve written a club track, I mean a piss take one but still! Taking the piss out of that fact, in a fun way. A lot of drag music is that and a majority of us do come from the clubs so it’s a natural progression. I just felt like that wasn’t something I wanted to do. I just thought I’d be lip-syncing for the rest of my life, but now I’m making queer music. I guess I’ll be performing live then!

Margo: I think what’s incredible about drag and how you’ve used your drag with your music and the visuals I’ve seen you create to go with this work is that you’re using drag as one of many art forms at the same time. That’s something that is so special from a queer artist. Sometimes I think our industry can be like ‘no that isn’t what drag queens do’.
Bimini: Absolutely! What I’ve tried to do is go into the studio and just go BLURRRRRK, rough voice, Prodigy-esque, straight, bouncing around at a festival, goin’ crazy but then made it queer. That just feels like me.

Margo: You’ve got so many projects going on, but what do you want to highlight to people?
Bimini: MUSIC! I’ve got releases coming out and right now that’s really where my headspace is at. It’s been very therapeutic! I’ve just done a song about struggles with addiction, and it shows a much darker side than I’ve done to date. I’ve done 6 or so songs and a lot of that is really fun, uplifting and positive. This one gets quite personal and I’ve been really enjoying exploring that. So yeah, the music is something I really want people to be looking out for. Oh and the music video which has been released on my YouTube channel – Margo’s in it!

Margo: I am! With so many other east London icons! Such an amazing diverse casting babe, well done!
Bimini: It’s just East London represent, every kind of body. It’s exactly what I’m about. But I’ve also got tours coming up, one with the United Kingdolls, and other gigs. Plus lots of exciting fashion editorials. Oh yeah and a book! ‘Release the Beast’ is out on October 14th.

Margo: I honestly don’t know how you are doing it all babe. Any other words?
Bimini: Go out and support queer spaces. It’s been such a hard time with the old ‘panny D’ and we need to keep ‘em open! It’s still hard to take in how much Bimini’s life has accelerated and changed since Drag Race. She just feels like the same old Bim that I’ve knocked about with for years: a wicked sense of humour, always the first to make a joke about herself and her infectious laugh. But then that’s exactly why she’s a megastar: because everything she does still feels authentically her. She only works with companies and people she believes in. She works hard and fights for trans rights. Plus she does it all in that signature punk valley girl look, in my humble opinion Bimini really is the future of drag.