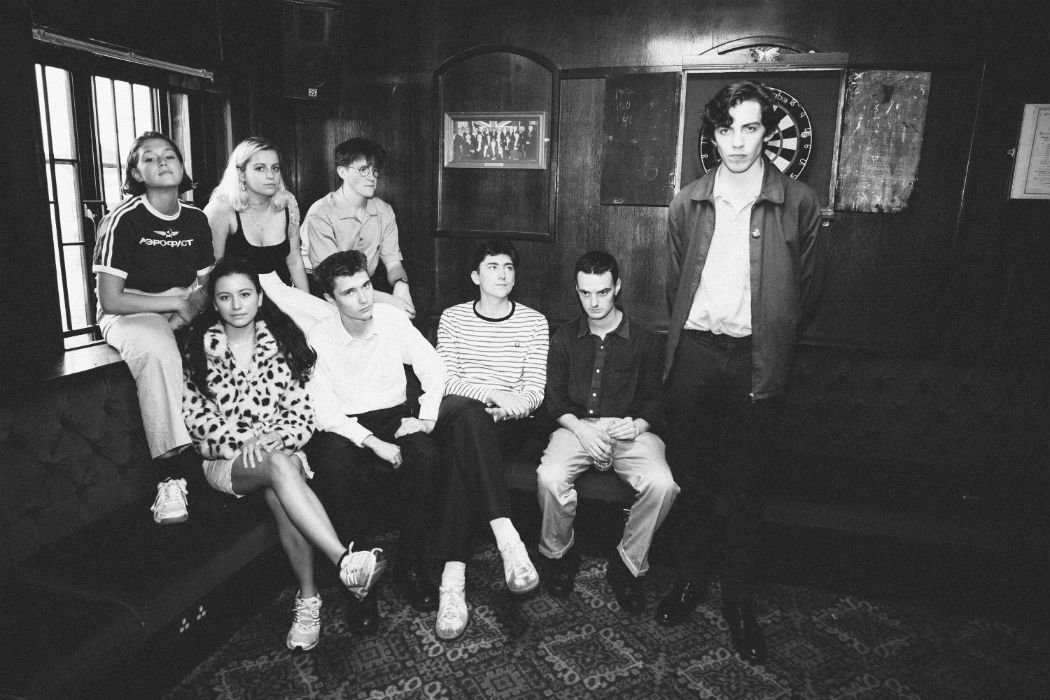 We were introduced to Nervous Conditions when we saw their live performance in Berlin a few months ago, during their EU/UK tour with Beach Fossils. The band turned heads as all eight musicians filled the stage. What sustained our curiosity was the drama that unfolded during their set. They were unapologetic, jarring, and real.

KALTBLUT: How did you all find each other and what are specific things that connect you all musically?
Connor Browne: We mostly met around Cambridge and its surrounding areas due to school. I have been lucky enough to meet some very interesting and talented musicians who have agreed to be in the band since the original formation a couple of years ago. I think we all like to keep things unpredictable and different each time we play, and for things not to become dull. Of course, it is also every member’s true purpose in life to be in the band.

KALTBLUT: How do you keep specifically things unpredictable for each show?
Browne: We do not have strict structures for songs, and I count in between the sections and I do some rudimentary form of ‘conducting’ throughout depending on what I feel is needed at a particular moment. The musicians frequently switch things up.

KALTBLUT: Does the band have the same lineup from a few years ago? How has the band morphed into what it is now – musically, emotionally?
Browne: It started out as a four-piece, myself and Tyler are the only two current members who were part of that, and we continued to add members and people moved on. It’s basically become a bit of juggernaut with eight people, it’s now a more powerful, fierce and musically interesting proposition.

KALTBLUT: Who are you all listening to right now? Can you share current inspirations: music-related and non-music-related?
Browne: Bruce Springsteen is a favourite of mine at the moment, Scott Walker has been a bit of an inspiration… the band all listen to different things. Isaac really likes trap. Lewis likes to think he is Kenny G. I think the band would agree Pete Um is undoubtedly the greatest and most overlooked artist of all time and a large inspiration to us.

KALTBLUT: Favorite moments from the recent tour with Beach Fossils in Europe?
Browne: Berlin was a standout in terms of how we played and audience reaction; we were very pleased with that performance. Damo Suzuki coming to see us in Cologne was also quite amazing for us! Both bands onstage at the end of the Milan gig on the final night was very amusing.

KALTBLUT: Are y’all working on new music?
Browne: Yes – half the songs we were playing on the tour is newer material which won’t be released immediately and I have also made a lot of demos recently which we will be working on. Before any of that comes out we do have recordings we will be releasing soon and plan to record more by the end of the year.

KALTBLUT: How has Cambridge influenced and supported the band? Has it?
Browne: Although I have spent a lot of time in Cambridge, I’m not actually from there and don’t live there. I talk a little about where I live in our song ‘Village Mentality’; it’s about 30 mins away by train. That said, I suppose it has been the base for our operations for some time, some of the band are from there and we’ve played a lot there. Some people there have been kind to us, some people couldn’t give a fuck about what we’re doing.

KALTBLUT: Is there a continuing narrative amongst your songs or does each one tell its own story?
Browne: A lot of my songs are sort of general observations or experiences I think, or just lashing out at things. Some of the songs are more ambiguous than others. I’m trying to hammer out some sort of narrative in the newer songs that I’m writing at the moment with a view to some sort of concept, it’s difficult but I’m getting there.

KALTBLUT: What do you often lash out at?
Browne: People on the train, students, anyone who will listen