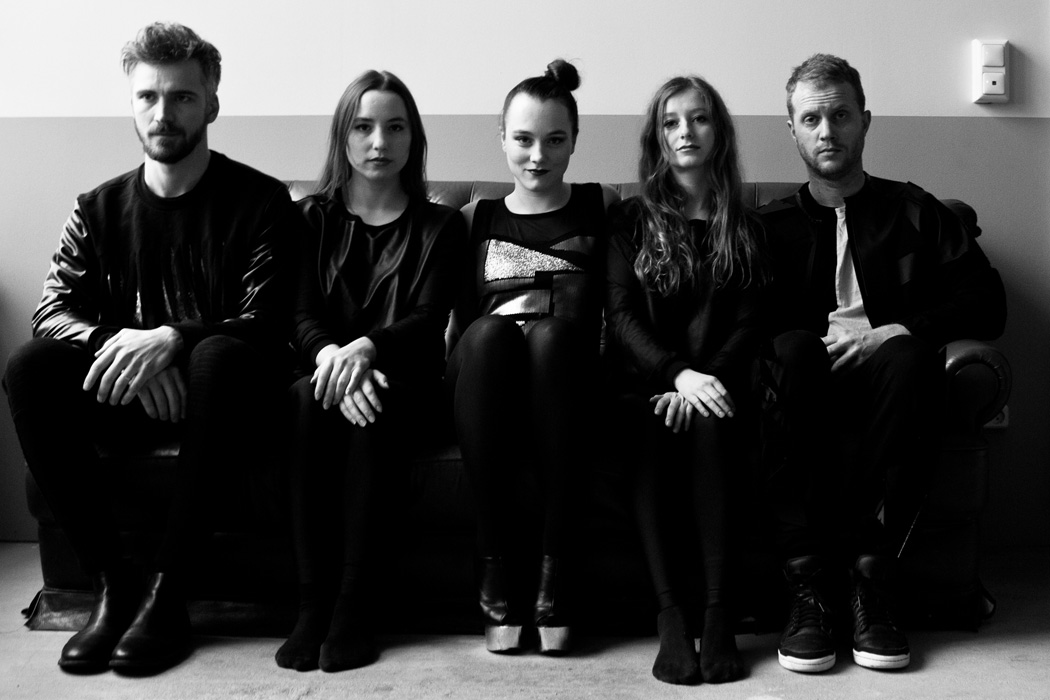 Edgy electro-pop ensemble Le Very are not your usual Berlin-based band. Incorporating their own sense of style, multimedia artistic vision and full on dance routines, the clash of five strongly talented individuals is ever present. KALTBLUT had a catch up with the band after their european tour.

KALTBLUT: How did Le Very come together?

Le Very: We started out as a duo. two boys getting into music, then we fell more and more for female voices, so we started looking for somebody to cover that end. We were looking for actors and dancers because we thought it might be much more interesting to work with people of different artistic areas. When we got to know Naemi, Nuria and Ada we knew that this was going to be something very special.

KALTBLUT: You say you are “Electronic pop with corners and edges of its own”, what does this mean?

Le Very: We’re not a plain electronic act, but heavily influenced by popular music such as EDM, Trap and Hip-Hop. Since we are into various musical styles, we are always looking for unconventional combinations. When we find ourselves in front of a musical obstacle, we look for the most original solution. Still we’re true to a pop musical approach and we are inspired by the limits of that particular playground.

KALTBLUT: Your fashion style is very unique, do you design your own clothes?

Le Very: Yes we do. Before we did our first show we had Josepin Thomas from Artificial Happiness working with us on the design of our characters. She is pretty much into the whole thing, permanently working with us on design, video and clothes. Soon we are also going to have a very unique merchandise collection.

KALTBLUT: Do you think you would collaborate with anyone?

Le Very: We will definitely collaborate with artists that we’re into. Maybe it would be more interesting to work with a theater or dance company or on a movie set, rather than collaborating with other strong bands such as Metronomy, Spank Rock, King Krule, Young Fathers, Deichkind, Little Dragon or Young Lean. We’ve already worked with fine artists from Berlin: dancers, choreographers and musicians, for example “Brand Brauer Frick” who happen to be our studio neighbours.

KALTBLUT: What’s the story behind your video for “Playground”?

Le Very: At first we had no idea what to do, and as usual we had no money, so Naemi and Tille set up a cam in each room of our managers flat and spend three days straight on their own without leaving the place. Every now and then visual artist Max Parovsky came by, had dinner with us and shot for a few moments.We were like cat and dog and we took pleasure in hating and loving each other. We think we represent two different characters of our hometown: The Lover and The Hater.

KALTBLUT: What has been your most favourite live performance so far this year?

Le Very: That’s hard to say, but the cities that come to mind at first probably are Hamburg, Leipzig, Vienna, Munich, Berlin, Frankfurt, Cologne and Paris.

KALTBLUT: What importance do the visuals play during live performances?

Le Very: It’s very important to us that music and visual performance match completely. In our shows we find it very important to have visual aspects like dance and lightning, that give room for a mental drift, because we want the suck in the audience and take them on a trip. It’s all about fantasy!

KALTBLUT: What have you been up to recently?

Le Very: We just finished three weeks of touring Europe supporting our friends of Zoot Woman, and we are still overwhelmed by the feedback of the audience. It really was a blast because we had only played one single concert before that, in our hometown Berlin. We have also been writing new songs recently, feeling very inspired by this brand new combination of characters that we call Le Very.

KALTBLUT: How was it supporting Zoot Woman?

Le Very: The boys are certainly the kindest band to tour with. True and rare British gentlemanship. Pretty impressive professionals and the best travel party ever.

KALTBLUT: What will be next for Le Very?

Le Very: Right we’re locked in the studio, giving the final touches to our first full length album set to be released this summer. Also we’re working on ideas and concepts for future video work.