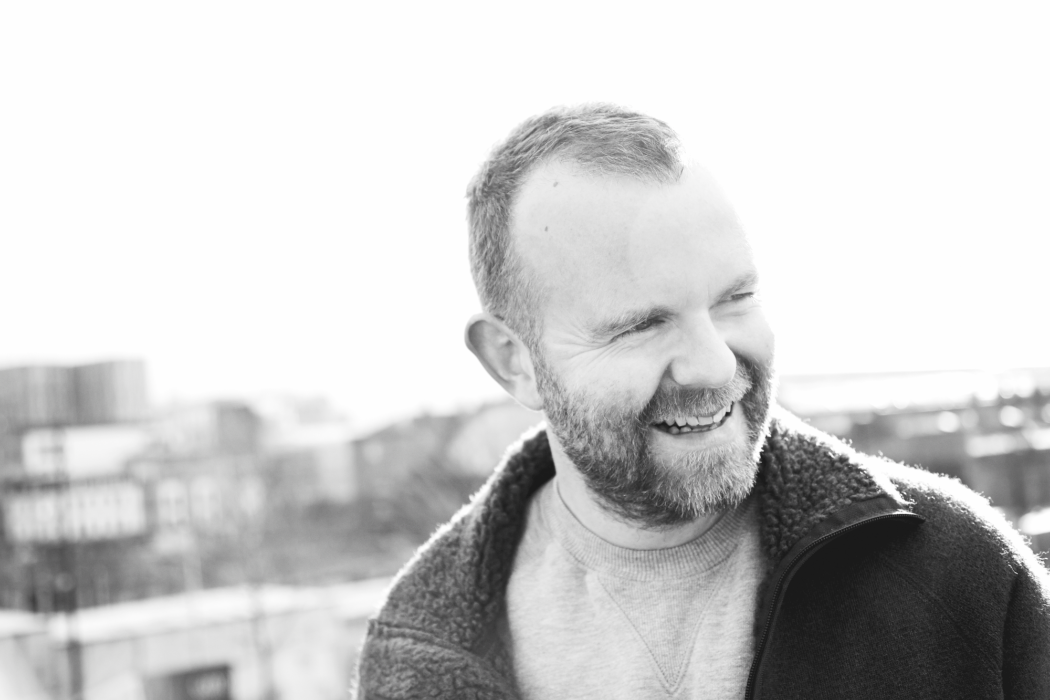 KALTBLUT has another exclusive interview with one of the greats for you today – house master Mark E. With his new release, Sky Horn, coming up this May, we had a chat with Mark about his highly anticipated new project, the vinyl revival, and he reveals the new experimental styles he has in store for us. Mark E has been recognised the world over as a pioneer of house music for over a decade. Sky Horn has exclusively commissioned artwork from famed artist and designer Sk8thing, and remixing on the EP for the first time ever is New York’s finest Happy Family (aka Eric Duncan of Rub-n-Tug/ Still Going and Justin Van Der Volgen), and Museum of Love (aka Pat Mahoney of LCD Soundsystem and Dennis McNany) who is also making their remix debut. Their remix of ‘Midnight Equatic’ delivers a heavy hit of percussion. Together they create an acid drenched remix of Sky Horn, which Mark created inspired by his “fascination with all the reports from around the world about strange sounds coming from the sky”. Mark’s reputation for substance over trends, and commitment to releasing only his best work, has led to a slow burning trajectory with a loyal and ever-growing fanbase since his first edits, including one of our favourites, a masterful rework of Womack and Womack’s classic soul sound, ‘Scared’. It’s these years of experience, and his ‘do what feels good and sounds right’ approach, that combine on Sky Horn to deliver a warm and energetic floor filler with Mark’s distinctively original touch.

Mark E’s love for electronic music was a reaction to the frantic and exciting rave culture of yesteryear. A steady stream of quality releases on Spectral Sound, Running Back, Sonar Kollektiv, and Golf Channel amongst others, has cemented his status as one of the pioneers of a generation. Visual artist Sk8thing was previously the creative force behind cult brands BAPE and Billionaire Boys Club. Today he is the ever-mysterious power behind Japanese brand Cav Empt, and effectively puts his stamp on this special release from US label Public Release. Previous affiliates of the label include Jacques Renault, Mike Simonetti, Woolfy and Tim Sweeney with a strong focus on the highest quality music, unique and original artwork under no time restraints.

KALTBLUT: You’ve been working on a new release, out this May, Sky Horn. Tell us about your new music and how this project and the remixes developed?
Mark E: Eugene got in touch with me via Tim Sweeney, as he wanted me to remix Jeffrey Brodsky’s release a few years ago. I then met Eugene in person when I played out in SF for Honey Soundsystem a while later. He suggested a full EP then – but to be honest I had quite a lot on my plate at that time, and didn’t really see how this could fit. But having had such a good experience dealing with Eugene for the remix, it wasn’t long before I cleared things to get stuck in to this EP. He gave me full reign to be creative and that’s what I did, and here we have the ‘Sky Horn’ and ‘Midnight Equatic’. He suggested the guys for the remix, and Eugene has a lot of connections, so I let him do his thing and make the whole thing work.

KALTBLUT: How do you feel this latest production reflects the way in which your style and creative approach have evolved more recently?
Mark E: It very much reflects my current style and recent creative approach. I try not to think about it too much, I just do what I feel sounds good and right.

KALTBLUT: How did you initially start producing edits when you started out, and which early influences did you find yourself drawing on?
Mark E: I started by sampling disco records into my computer and creating tracks and loops from that. I’m influenced by primarily African American house producers like DJ Pierre, Carl Craig, DJ Sneak, Glenn Underground, Larry Heard, DEF mix crew, Mahogani records & Sound Signature.

KALTBLUT: How have you seen the house scene both in Birmingham, and in a wider sense, change with the advent of new technology and different levels of access since you started playing and putting music out there?
Mark E: I have been living in Oxford now for nearly 5 years, so not as tuned into the Birmingham scene as I once was. But I find it pretty much the same, DJ’s playing to a crowd of off their head 20–30 somethings. Technology wise, digital obviously has happened which I think is great, but personally I still carry vinyl and my CD wallet.

KALTBLUT: Why has it been important to you to put your work out there on vinyl all these years – and what’s your opinion on the recent revival of vinyl within the music industry?
Mark E: I hold value in owning the vinyl release – my life is not complete until I have that in my hand and part of my collection. Some stuff, I can live with just having it as a wav, BUT other things I NEEEED to hold and to own. That’s why I release music on vinyl. I do however wish there was another way of getting it out to the consumer, as lead times are just so long these days, but I can live with it. The recent revival is great, people have record collections, it means something, it gives you an idea about them. Files on a laptop don’t.

KALTBLUT: What do you take from the experiences of your DJ sets that maybe influences your own work, and the way you produce, and what has been your best experience playing to a crowd?
Mark E: DJing you do see and hear first hand what works and what doesn’t in that setting, so naturally I guess that has influenced how I make music. Although I’m not one for the big banger, I do prefer the more subtle side of dance music. And the music I’ve been making very recently is very much in the vein of my early production – a lot more laidback, and soulful I think. Perhaps that’s due to reducing how much DJ work I do these days. As for DJing experience – I had a great time on a rooftop in Lisbon last week. But yeah there are so many, too many to mention for various reasons.

KALTBLUT: What inspired you from working within the industry and releasing work over several different labels to start your own label MERC?
Mark E: When you start out in this industry, you want to get onto every cool label out there, and looking back I did pretty well at that. And I’m so grateful for everyone who put everything into making that happen, but unless you cultivate a long term plan from the beginning with that label (which is pretty unheard of) it seems to me like a bit a disposable ethos – here today gone tomorrow kind of thing. So doing it yourself DIY style appeals more to me now that I have had experience dealing in the industry. I’m as guilty as the next producer of getting music out there to keep your name out there, but I want to start making music with value and longevity. I think my distributor Chris Duckenfield from ALL EARS put it very well in one of his label mail outs regarding pressing lead times – ‘Only release your music if it’s fucking brilliant.’

KALTBLUT: How did the collaborations on Sky Horn come about – and what are you looking for in the artists you’re working with that you found with Happy Family and Museum of Love?
Mark E: Eugene came to me with these ideas, and what amazing ideas they are. I don’t think I could’ve ever hoped for any better remixers – and I think the results speak for themselves.

KALTBLUT: How did you feel the visual artwork from Sk8thing tied in the with the music on this project?
Mark E: I think it’s just so out there and crazy, I absolutely love it. I think it really works with all the different styles of the people involved.

KALTBLUT: What direction do you hope to take in future both as a producer and artist, and with MERC, and what new projects are you hoping to undertake in the coming year?
Mark E: I’m really enjoying getting back into making edits lately, and that’s how MERC has been running with the E-Versions series of late. And think this latest Mark E EP will be the last for a while – I’d like to perhaps produce an album or start something fresh and new, perhaps another alias or two, who knows. I am currently producing an LP with my friend Stuart, we are known as Quarry Hollow. xlr8r called us “ almost indescribable genre fusion “ which I like – this is taking up all my time at the moment.

Sky Horn is released on 13th May via Public Release. Pre order here.