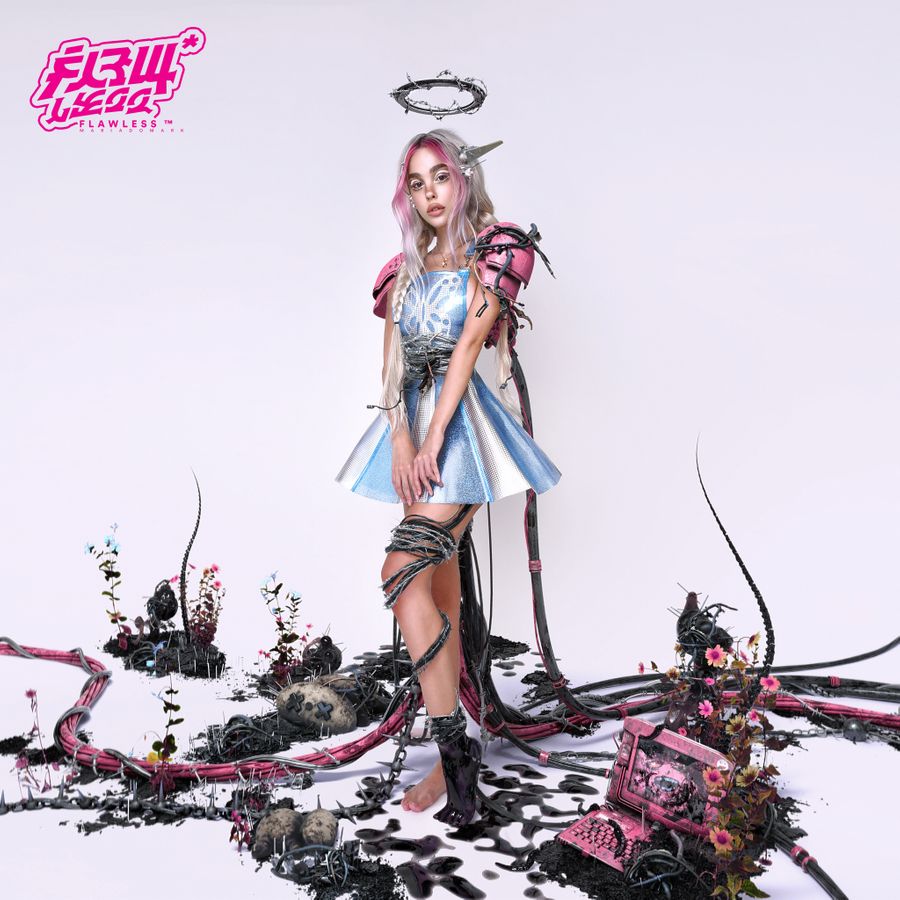 This week’s mixtape was recorded by the Russian Future-pop artist Maria Domark. Having built a name for herself through her modelling career, Maria has now returned to music. Her debut EP Flawless is a collection of five deeply personal and meaningful alternative electronic tracks and is accompanied by hyper-modern 3D art from artists such as Sevi Domochevsky, Daniel Benza and Razorade.

About the mix, Maria said: “The mix is inspired by my Warzone.mp3 Spotify Playlist. Iv’e collected some of my favourite tracks from the past few months that I like to game to, a lot of heavy bass, mid-tempo, badass tracks.“

KALTBLUT caught up with Maria just after she released her EP and spoke to her about Avril Lavigne, her return to music and why she left the modelling business. Listen to the mix and read the interview below.

KALTBLUT: You’ve recently released your debut EP Flawless, how are you feeling?

Maria: It’s still super fresh, and I don’t know what’s going on. I barely sleep and all I think about is how I can promote it better and how I can reach a bigger audience. That’s all I’m thinking about, it’s a crazy experience of the unexpected.

KALTBLUT: When did you decide to pursue music?

Maria: I have been making music since I was a little girl. It was my biggest dream as a child, I learned to play the guitar on my own when I was eleven. I really looked up to Avril Lavigne and all those punk-pop bands and wanted to make music like them. Then I started writing songs, but I eventually stopped because I wasn’t accepted into a music major in high school. That crushed my dreams. My mom also didn’t support me, so it was a combination of that and me losing all confidence. Then I restarted and said to myself that this is what I wanted to do and what makes me happiest.

KALTBLUT: I’m sorry that happened to you, it’s crazy, so many artists always talk about the experience of not having been accepted into a school or course… I’m glad you found your way back to it. Tell me a little bit about your musical influences.

Maria: In the beginning, it was Avril Lavigne, I think she was my first musical love. I was her biggest fan, I even had this huge website that I built for her. I promoted it and I believed in promoting it. I wanted everyone to hear about Avril Lavigne, I wanted everyone to hear about her music and love her just as I did. Then I think it was Britney Spears for a while, along with Avril. I really liked major pop acts. I guess as all teens do. And then I moved more to rock music like Linkin Park and Muse. Linkin Park is still one of my favourite bands ever.

KALTBLUT: And when you were listening to rock music in your teens, did you feel like women were represented? I feel like when it comes to rock music, female rock stars are always outnumbered.

Maria: I had Hayley Williams from Paramore, so I didn’t really feel that growing up. There was a time when I was a kid when I preferred to listen to female voices more than male voices. I then changed from when I found out about Linkin Park, Muse and Sum 41 and realised that I preferred male voices better. Now, I’ve shifted back to preferring female voices. But I agree with you, that’s why I like what’s going on in music right now. People are sitting at home producing their own stuff and making great music, it doesn’t matter anymore if you’re male or female, everyone is just making crazy music on their own. That’s why I like this off-mainstream wave that’s going on right now.

KALTBLUT: I agree with you! And while listening to your EP, I found the songs are very striking and it’s very much like you’re showing your confidence and in a way celebrating your independence and not letting anyone tell you who you are. Is that kind of what this EP means to you?

Maria: Yes, it’s definitely that. It started with “Haunted”, which was the first song I wrote for this EP and I didn’t at that time think that it would be part of anything. It made me start producing and installing Ableton on my computer, and then I started to build this project. Then “Rumors” came around and in that song, I’m telling a story about a girl who’s been caught up in vicious rumours in her town, and she’s been torn apart by people who spread rumours about her and ruining her life. That’s kind of something similar to what I’ve been through as a model. Not that viciously, of course, it’s a story but it’s something I relate to. And then I wrote “Mieway” and it was like I stopped being part of this industry, part of this thing where people tell me what to do, what I should be, how should I act, and what music I should make. I just did my own thing.

KALTBLUT: You’ve already briefly touched on your modelling career. You’ve deleted everything from back then from your socials and you said that you wanted a completely new start. Is that because of the bad things that happened to you while you were modelling, or did you want to create a new “persona” for your music?

Maria: I think it’s both. I enjoyed modelling at the beginning when I first started. And then, when I became successful and famous doing that, it became super hard for me. I didn’t like the attention being all about the way I look. In all the interviews they were asking me about my skincare routine, about my body and how I work out, it felt so boring and fake, I just couldn’t take it anymore. I wanted people to like me for something worth being like for. I wanted people to appreciate me for making something that’s that can make a difference and not for just existing. I stopped modelling two years ago before this project started, and it was the best decision I’ve ever made. I’m very happy I did it.

KALTBLUT: I’m glad you found your way. Talking about social media, it’s in a way a blessing and a curse. It gives you so many opportunities, but the downside is horrible comments and always having to keep posting to stay in the loop. Do you still feel that as a musician? I can imagine you felt it while being a model.

Maria: I definitely felt pressure as a model and as an influencer. It was hard. I got a lot of bad comments and it was difficult to understand why people choose to write mean comments to people they don’t know. I would never act this way, so it was very hard for me to understand. But social media is a part of our life now. We all live inside it and reality and social media are combined these days. I guess everyone has to be there if they want to make something successful. You have to be on social media because everything’s happening there. The bad comments are just part of it.

KALTBLUT: Do you feel more exposed now because the EP is such a personal project?