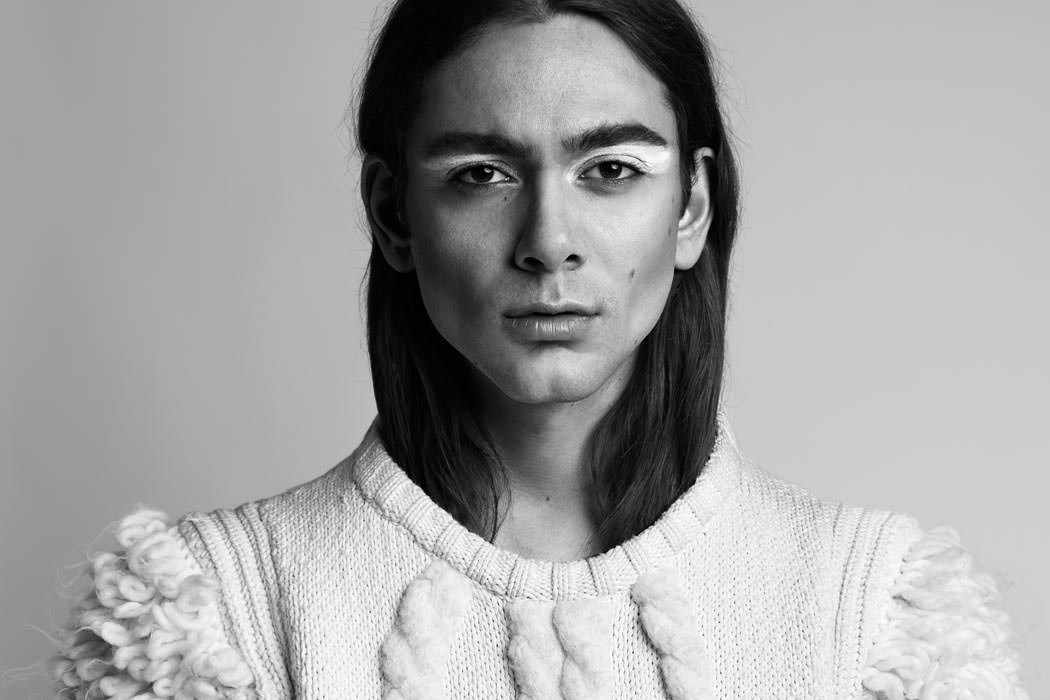 Faces U Should Know: Riccardo Simonetti

Welcome to our new section: “Faces U Should Know”! It’s about people we think you should meet! First is the 22 years old blogging chameleon and starlett Riccardo Simonetti. Born in the little health resort town Bad Reichenall he couldn’t wait to escape and started the Blog: “THE FABULOUS LIFE OF RICCI – Confessions of a hopeless Dreamer” to talk about his passions and his daydreams. It was hard for him, because he polarized in a small town like this with his bohemianism.

With only 16 he already been part of the youth ensemble of the theater in Salzburg.

He moved to Munich and started working as a model, actor and columnist for Huffingtton Post and several magazines. Now lives in Berlin, where we had a little talk with the it-boy about eating disorders, the future and flowers

KALTBLUT: You’re columnist, it-boy, model, actor! What has been the highlight to your career so far?

Riccardo: I feel like I am working on my dreams since I was a little kid who was dreaming of fame and glamour and looking back I can simply say I am very grateful for every project I ever worked on. If I had to choose one special Highlight I would definitely say how my life has changed. It’s the best feeling you could imagine to walk down the street and meet people who like what you do and get inspired in believing in themselves by what you are or what you write on your blog. All I ever asked for. 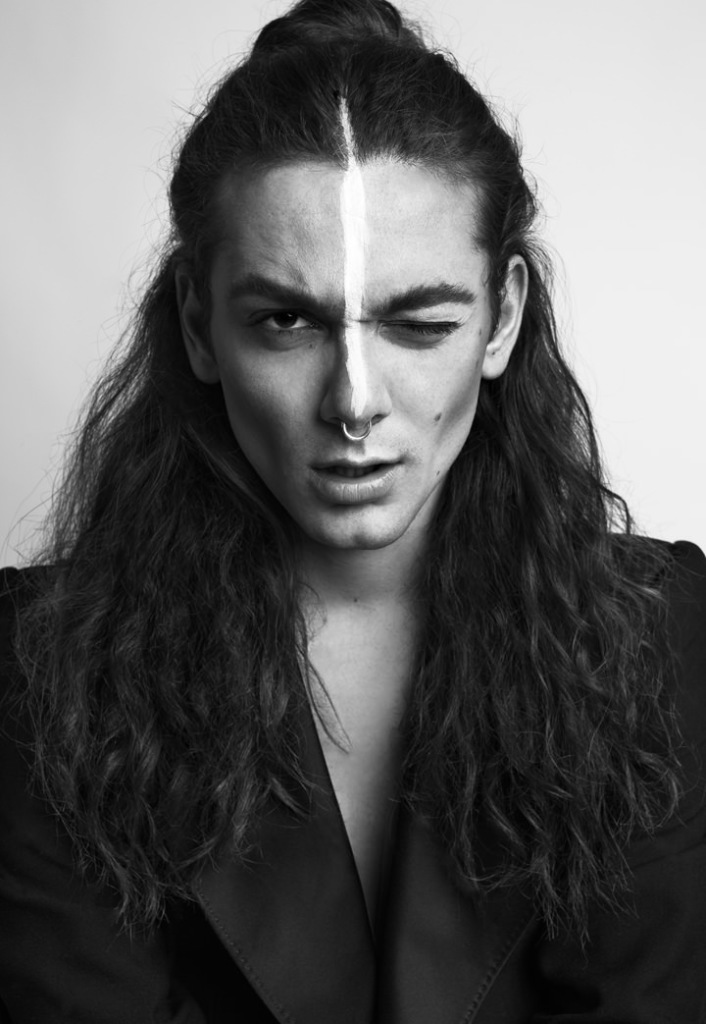 KALTBLUT: What/who are your influences? What inspires you the most, in fashion, music, life?

Riccardo: When I went to school, life was hard for a dreamer like me, so I did, what I do best – dreaming. I wanted my life to be like a melodramatic movie, so I definitely get inspired by the soundtrack i choose and when it comes to fashion I do the same thing. I played theatre for 15 years, so I really like stage clothes and I dream of a closet looking like Michael Jackson’s or the one of Lady Gaga.

KALTBLUT: You’ve been 14 when you had your first radio show, what kind of show would you love to host now?

Riccardo: I really like being on TV now. I literally enjoy standing in front of a camera and just being myself, sometimes I feel like this is the only place which I can truly be myself without anyone else telling me I should be less the person I am. A mixture of entertainment, serious topics who affect people and maybe interesting guest would be something really cool and of course lot’s of great outfits. When I think of my life right now maybe a reality show would be a good option, too. 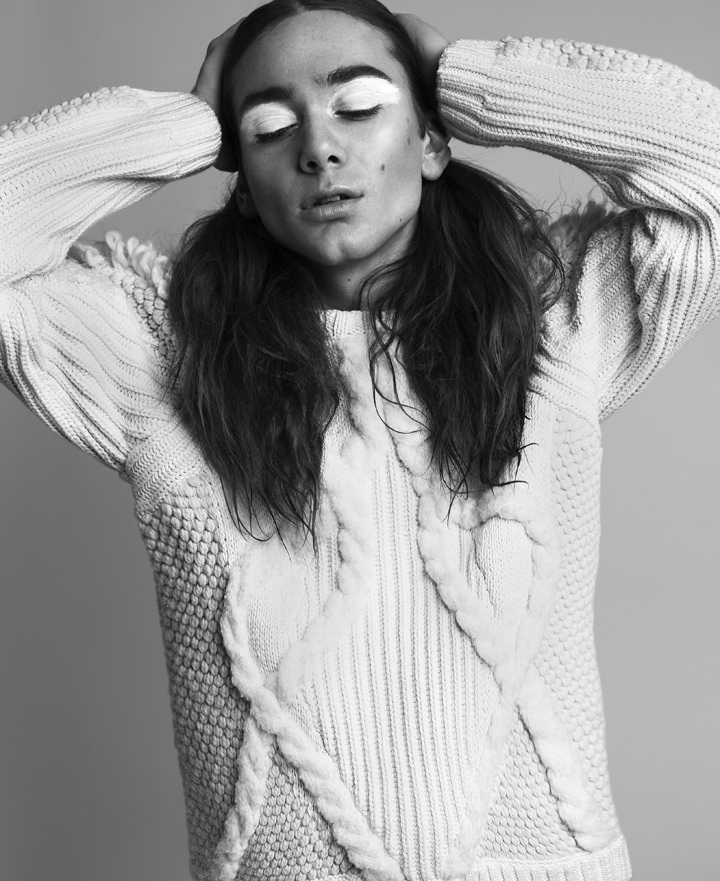 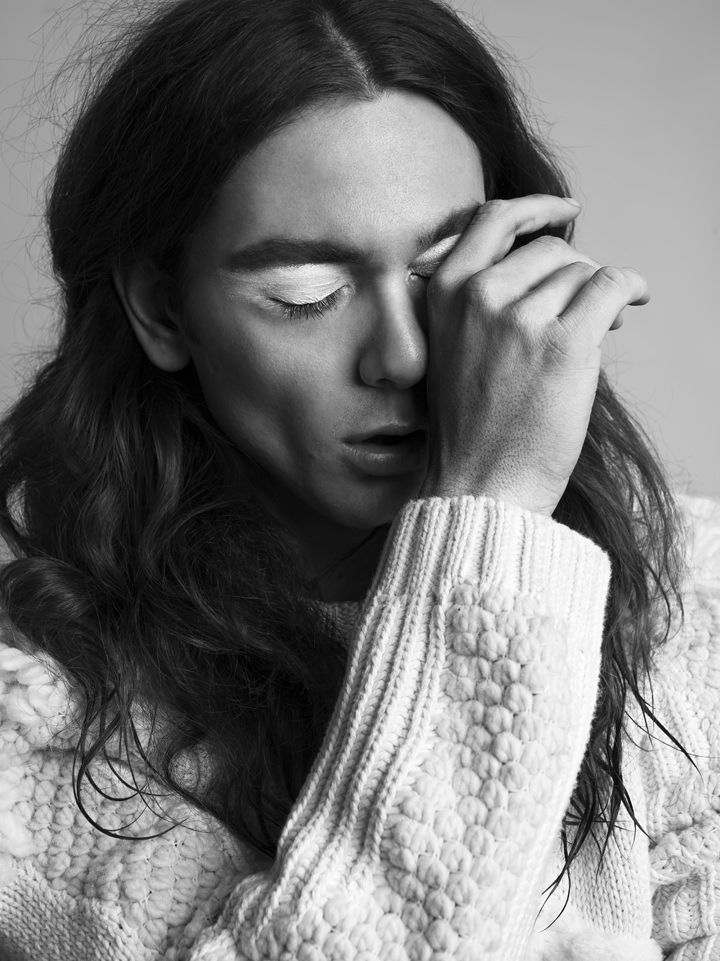 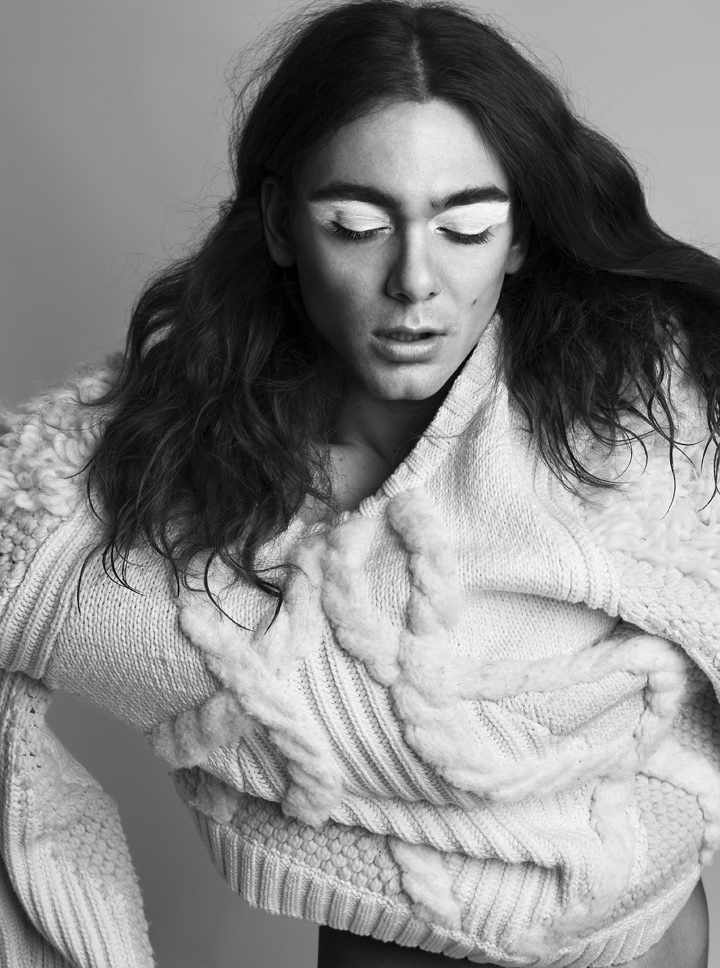 KALTBLUT: If you had to choose: Fashion or film? And can you tell us something about your first role on the big screen ?

Riccardo: To me the one thing doesn’t work without the other. I define myself through the outfits I wear and when I have to be someone else for a job, clothes would always help me to become that character and play it credibly.

I am never working on just one project, so it feels natural to have both because I ‘AM’ kind of  both. I really hope I won’t have to choose…when I was working on my first movie last year, the filming crossed with fashion week, which I really wanted to attend, so the director allowed me to do the fashion stuff all over the day and we filmed my scenes during the night. My schedule was super hard because I just had two hours of sleep every night (8-23 Fashion Week and then filming and Interviews for the movie till 5 am) – I felt like 45 after finishing that month, but I would do it exactly the same, when this allows me to have more than just one.

KALTBLUT: You’re also a known Blogger. Everyone with a macbook nowadays thinks he, or she is a blogger, what do you wanna tell them?

Riccardo: With out my Blog, I wouldn’t have anything I have today. It helped me to express myself and talk about topics beside fancy shoes or outrageous headpieces. I often write about how society reacts to my unconventional way of life and this can be very therapeutic. It’s important to me to talk about bullying or hate in this world because although I can be very grateful to live the kind of life I want to live, I know that not anybody can do the same. I hope to inspire people to believe in their own dreams and make them more interested in developing their own opinion. I also want to show the world that life isn’t as easy as people think for boys who show more feminine features.

From the beginning it was natural to me to write about what I really feel, that can be the latest fashionon one day and a controversial essay about homophobia in the next and I would like to see more Bloggers showing personality, when it comes to choosing their topics and also their outfits, we have just too much of them who all look like each other. Why not show who you really are?

KALTBLUT: What do you think is the future of blogging?

Riccardo: I think the industry just released how important bloggers are for the world of fashion and lifestyle so the trend will still increase and some of them will become very powerful influencers. But on the other side there will be so many of them who just aren’t interesting enough to keep themselves relevant, so I think there will be a lot of movement in the blogosphere – coming and going and if you want to be a part of the ones who stay, you have to be more than just a blogger – develop yourself to be a own brand, an entrepreneur, become a designer, author of books and so much more.

KALTBLUT: You work a lot with photographer Joseph Wolfgang Ohlert! You recently had a naked shooting with him and talked open about the time you had an eating disorder, how was it?

Riccardo: Joseph was one of the first photographers I met here in Berlin and the way he photographs people is very inspiring and truer than I was used to. I couldn’t have been less prepared for that shooting. I didn’t sleep all night, had no Make-Up on and my hair wasn’t done (which the diva in me doesn’t like at all!) and felt kind of insecure of letting it all off, not just in front of him, but also in front of a bunch of people and cameras. The shooting was very spontaneous, the pictures are not retouched and got shot with an IPhone. When I first saw them, I was surprised how I appeared without any clothes on, much stronger and masculine that I imagined myself to be. Although you make yourself vulnerable I decided to use them for a Blogpost talking about a topic I wanted to talk about for so long. Eating Disorders and the relationship with your own body. Sometimes reality and the image you have in mind of your own body are not the same and because I know how hard it can be to overcome that kind of situation I wanted to let people see how it was for me. The feedback was overwhelming because there were so many people who can refer to it and I am glad I risked something. Now the pictures will also be published in a swiss magazine, the article will be about how to overcome eating disorders. To share your own experience in order to encourage others is something really important to me. 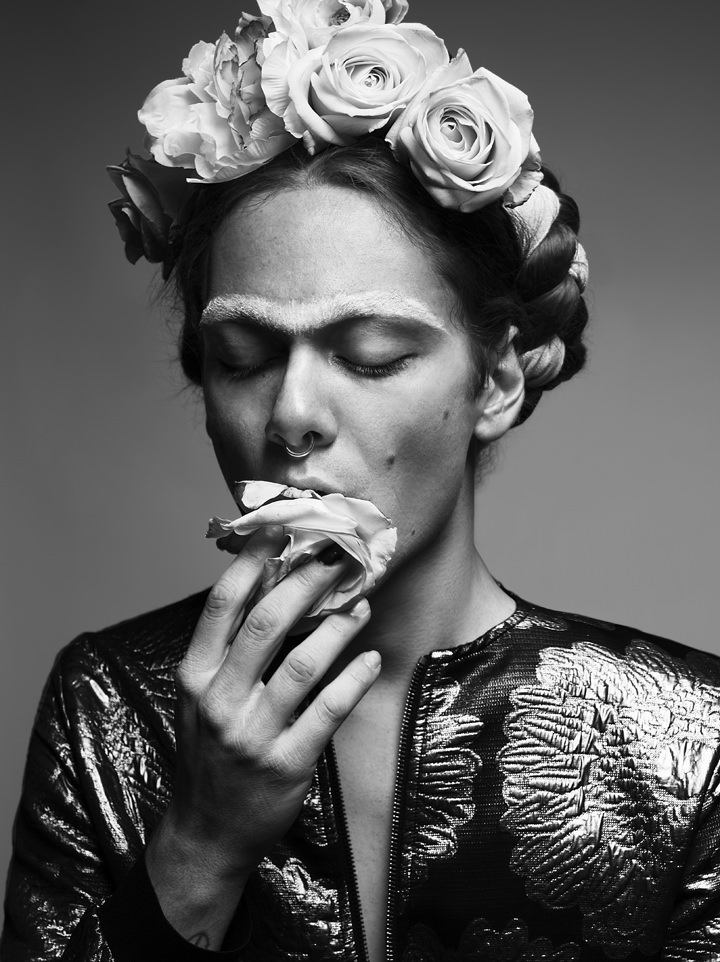 KALTBLUT: With which photographer, or director would you like to work ?

Riccardo: There are so many but though I am obsessed with Pop Culture I feel very attracted to get shot by Terry Richardson once in my life. Although he’s controversial I would like to create my own image of him. I also had the chance to meet David LaChapelle and would freak out to collaborate with him. When it comes to movies, I would love to work with Pedro Almodovar. His fascination of bizarreness in everyday life situation is something I feel very connected to.

KALTBLUT: You live in both cities, but wich one has your heart? Berlin or Munic?

Riccardo: Why do I always have to choose? I always want to have it all! Munich is more familiar to me because I grew up as an Italian in Bavaria and it was the first city to allow me to live my dreams, so it will forever be in my heart . Munich is also a lot more than people expect it to be, you just have to get to know it. – When it comes to Berlin, I love it for what it is – an open minded world, which is the only place right now that gives me the opportunity to live the life as the artist I want to be. It also is less open minded than I imagined it to be, but still the most creative melting pot right now.

KALTBLUT: What’s up with the flowers?

Riccardo: In a world which is full of skulls, spikes and all the other stuff, former known as punk culture, I sometimes feel like a soft appearing flower is the most rebellious thing a boy can wear. Don’t believe me? Try it and you will know what I mean. First I wore them just because I think they looked pretty in my long hair and the first evening I did that, I got beaten up on the street and that was a moment I released that I may get beaten up for what I like, but I will not allow  anyone telling me what I have to be and look like. Since then it became a kind of trademark which accompanies me during my every day adventures.