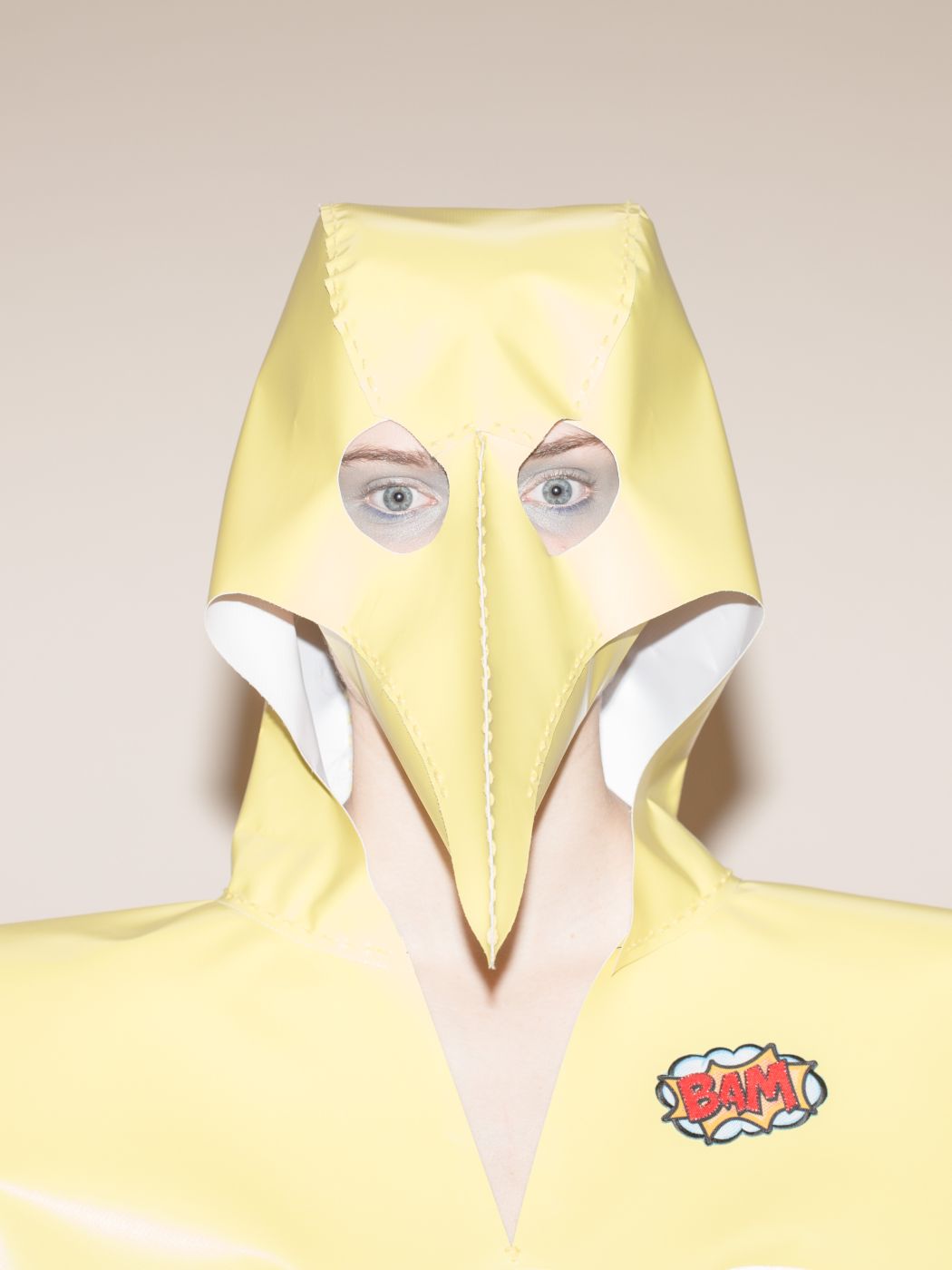 For the 10th edition of CLASH Project, ten artists reconstructed their ideas into wearable pieces of art, relating them to the topic of this year’s FASHIONCLASH Festival “Fashion My Religion”. But how do you fashion a religion? You start with the basic ingredients: Faith, expression, feelings and the amalgamation of modern pop culture and the divine. Text by Stella Bitsakaki. Photography by Anton Fayle & Sem Shayne

Most religions tend to be restrictive regarding what their believers should wear. Fashion enhances the sense of liberty and creativity. The differences separating the two are more than obvious, but besides them, there is one strong bond that creates a bridge between them; Expression. People believe in a religion because they express their feelings and values through the divine, on the other hand people believe in fashion because they express their feelings and values through their own personal preferences. However, the controversies covering this oxymoron relationship

have led to the penetration of fashion into religion and vice versa. Religious influences can be seen in important fashion runways, either in the garments or by models wearing hijabs or other religious costumes. The important part is that nowadays, the religious audience itself, starts to demand to be part of the international fashion trends, leading the fashion industry to expand its scope to a broader audience. Some of these ideas and a lot more where be expressed through the wearable artworks of CLASH designers in CLASH project 2018.

We asked some of the CLASH Project participants to give us their views on the topic and here are some of their answers:

This year’s FASHIONCLASH Festival’s topic is “Fashion My Religion”, do you think there is a strong relation between fashion and religion?

Cox Janssens (illustrator, designer): “In most cases I don’t believe so, it depends on the way you look at it of course. I see fashion as an ever-changing phenomenon, while religion hasn’t changed enough in my opinion. If you look at it from another perspective, maybe fashion is for some people what religion is for others: something to hold on to, to personalize yourself with, to be aware of every day, to give a goal in life.”

Aurelie D’Incau (visual artist): “If we understand the word ‘fashion’ like the French verb ‘façonner’ which means ‘to shape’ or literally ‘design’ and ‘religion’ as faith or ‘bound to a truth/belief’, we can see the meaning of this title as ‘to shape one’s belief’. And if we start off on that foot, I do believe, fashion has to do with belief and religion. It means that we can shape what we show and we don’t show to the outside world.”

As both topics are also means of expression, to what extend do you believe people can express themselves through fashion, religion or both combined? Do religious restrictions hold back people from expressing themselves?

Dasha Tsapenko (product designer): ” No doubts, people can freely express themselves through Religion as well as through Fashion and through both combined. Very often, Fashion serves a tool for expressing a certain kind of Religion or its absence. In the contemporary society, where we are overwhelmed with numerous possibilities, variations, options, and choices almost in all materialistic life aspects, restrictions, in my eyes, are somehow a survival kit and a breath of fresh air. I also believe, that without restrictions it is impossible to be truly free. Following the restrictions is a hard discipline. But discipline and freedom go foot on foot together for me. Therefore, in my eyes, restrictions not only don’t hold back in expressing oneself but on the contrary are super powerful tools for expression. Nothing changes with religious restrictions. If one had chosen a specific Religion and follows it, restrictions are one of the methods for expressing that.”

Religion plays an important role and often defines how people should dress in their everyday life in specific cultures and religions. Most of the times religion requires a more traditional way of dressing up. Should that remain as it is or should fashion penetrate in this process with alternative options?

Mies Loogman (information/communication/strategic designer): ” To a certain extent I believe that fashion can innovate within the religious dressing up requirements but I think there is a difference between the more conservative groups and the more progressive groups. I think the alternative options should derive from within the religions or be created in co-creation with them. I believe that everyone should be able to wear what they want without being thrown out of the social structure they belong to but as an atheist I don’t see it as purely my responsibility to create these alternative options for other religions. ”

Has religion ever inspired you to create something? If so, what?

Simone Schuffelen (visual artist): “I’m not sure maybe it did maybe it didn’t. Can’t name a project at the moment. But I can remember that many of my works find their beginning in a contradiction in norms and values in our current society or the society I’m living in at the moment in Maastricht/ Limburg/The Netherlands.”

Mies Loogman (information/communication/strategic designer): ” Religion is a great source of information and inspiration for me. I am delighted by the sense and choreography of religious rituals and sacred objects that are essential to them. Prayer beads, for instance, traditionally used in many cultures for counting prayers inspired me to create a series of dresses — props for meditations. These dresses each has over 150 brass, copper or silver buttons to complete, in order to wear it. It may take from 40 minutes up to an hour to dress one. By triﬂing the smooth metal buttons and continuously counting the closed once, the mind of the wearer has a moment of rest and focus on the time where the accelerated world demands speed and multifunctionality.

From these statements, I understand that opinions, regarding this topic, vary. There are many religions and also many different kinds of styles in fashion and each one of us believes and follows what feels closer to our personal expression. It would be impossible to have one opinion, especially regarding such a controversial topic. And for me this is the beauty of freedom of expression; Opinion Clash.

Since the beginning of FASHIONCLASH Festival in 2009, CLASH Project invites ten artists and designers (all non-fashion designers) per year to translate their work into wearable catwalk pieces.

Participants from different art and design disciplines are challenged to transfer their practice, both materially and conceptually to a different medium. CLASH is the perfect opportunity to step out of your artistic comfort zone – to play and to experiment with other forms of art. The participants are professionals who represent various artistic disciplines, such as fine arts, product design, jewelry, performance and photography. All disciplines except fashion are possible. The CLASH project has become an iconic project, forming one of the highlights

of the FASHIONCLASH Festival, and its outcome is always refreshing, captivating and trendsetting.