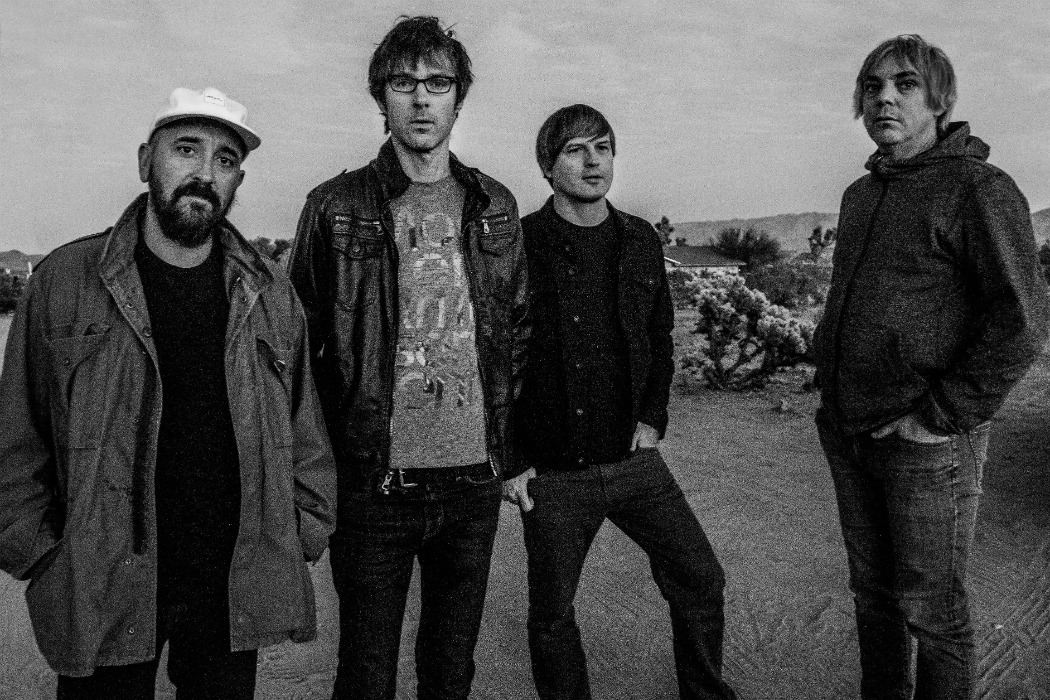 Los Angeles-based Film School share “Go (But Not too Far)”, taken from their upcoming EP release this summer on Hauskat Records. Having initially formed in 1998, the band has taken extended time off from sharing their darker psychedelic atmospheres full of seductive melodies: something they’ve become quite well known for. Fast forward to where we are now, where the musicians have created space to release music which induces intentionality and patience in its own respect.

“Go (But Not too Far)” sonically floats amongst soothing and unbroken vocal melodies. Singer/guitarist Greg Bertens explains its lyricism as navigating ambivalence around support for friends and partners.

We spoke further with Bertens on what it was like to record in an isolated desert landscape, the music he personally disappears into and why the band takes their time.

KALTBLUT: How does this upcoming EP compare to previous releases?

Greg Bertens: In the past it’s taken us quite a while to follow up with new music after a release, like years, but in this case the EP will be coming about 9 months after our full length Bright to Death. It feels like we’re hitting a creative stride and we’re just going with it, trying not to be too precious with the songs.

KALTBLUT: How does the band explain the more intimate evolutions of the project?

Bertens: Last night we played a show in Chicago and a fan came up to the stage after the show to tell me a story. She told me she started listening to our music when she was 17, about 10 years ago, and how she would fall asleep to the music in her headphones. How she had a intimate connection to the songs and how it got her through some difficult times. That meant so much to me because as a kid I also remember deeply connecting to music and the importance of some bands existence.

KALTBLUT: Which bands did you listen to long term and grow a more intimate connection with?

Bertens: Depeche Mode was a big deal for me as a kid, especially the Construction Time Again and Some Great Reward albums. So many perfect songs on these records for a moody, reclusive teenager to disappear into. Also David Gohan’s ability to seamlessly move between intimate and throaty singing styles definitely influenced the way I approach vocals.

KALTBLUT: What visual experiences can your audience expect without giving too much away?

Bertens: Adam Marks, who directed our “Compare” and “Influencer” videos, is doing visuals for us on tour. He prefers projecting on us (as opposed to on a screen) which has a way of melting the stage and sound into one big psychedelic soup. It can get intense, sometimes I’ll turn around mid-song and watch the band, it’s pretty mesmerizing.

KALTBLUT: Where were these isolated surroundings you recorded the new music in and what specifically inspired you about this place?

Bertens: We recorded Bright To Death in a small house/studio in Joshua Tree, California. It’s a small town in the high desert about 2 hours west of Los Angeles. Our place was on the outskirts of town and we just disappeared from society for a week and a half. No phones, no email, just writing music morning to (late) night. It’s incredibly quiet out there, both audibly and visually. All of this allowed us the space we needed to disconnect from our busy lives and get into a creative dream-like space where the songwriting could flow. It was a very special trip, probably the most creative group experience I’ve been a part of.

KALTBLUT: Is it not a coincidence that the band’s focus is to connect with nature and the studio is located in Joshua Tree?

Fresh Out Of The Oven: Empire Of The Sun – Celebrate

Bertens: We weren’t so much trying to connect with nature as disconnect from society. We wanted to find a place with the fewest distractions possible. The desert is just 1.5 hours from Los Angeles so that made the most sense. Though I do think the barren, sun-bleached landscape does have an effect on your mood and outlook. The day starts early and ends late. It’s barren so it feels like little changes from day to day. And the desert expanse is both a freeing and humbling experience.

KALTBLUT: How often is the band able to get away to disconnect in order to collectively move forward with new material?

Bertens: We’ve been able to do that exactly once. I want to do it again, but everyone has busy lives and our time is very limited. Right now we’re putting our time into playing these new songs live, we’re actually on a US East Coast tour right now. But we’re moving forward with new material by doing some file sharing, which has been surprisingly productive.

KALTBLUT: Can you expand on the narrative behind “Go (But Not too Far)”?

Bertens: “Go” isn’t a song about love, which some people have been asking me about. This song is about friends who want you to be great… but not too great. It’s about wanting someone close to be successful, but fear of them being better than you. It’s like when you see someone post a great accomplishment and get only a few likes from their friends, but then they post a picture of their cat and their feed blows up. We only get competitive with those we consider to be our equals.

KALTBLUT: This phenomenon of keeping loved ones close and a general feeling of loss when they become too successful, has that happened quite often in your circle? It seems like there is such a fine line between ‘making it’ and keeping things relaxed versus running away with the fame only to forget those who were there from the beginning.

Bertens: Yeah I can see that and have had some experience there. But for me “Go (BNTF)” is more about the ambivalence around support for friends/partners. Most of us want to be supportive to our friends so envy isn’t something discussed. It’s sort of an ugly, private experience that we’d rather not have, yet it’s effects can be seen in indirect ways like the social post example I mentioned. It’s like a black hole – you can’t see it directly, but by observing how objects around it are affected you can get a sense of its presence.