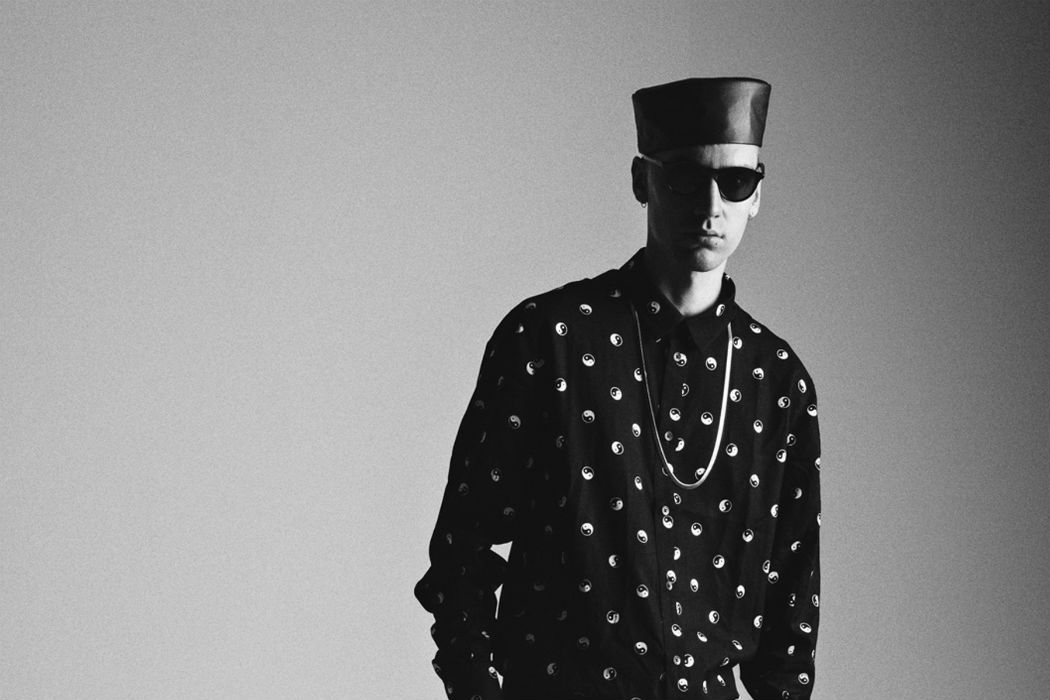 For Magic Eyes Only: An Interview with Ultramajic

Ultramajic, the brainchild of techno whiz Jimmy Edgar, dance music and digital art mastermind Alfred English, and critically acclaimed futurist artist and designer Pilar Zeta, is a fast rising record label that redefines what it means to truly be both an ‘art’ and ‘music’ collective. This is an imprint that seeks to create and strengthen a creative community that extends beyond simple success and fame – a community dedicated to the creation of culture itself. Ultramajic celebrates the new, the different, and the unknown, and it’s stunning new website combines music and artwork to explore the power of the internet as an artistic medium to open a portal to another world. In the past few years the label has gathered a roster of unique artists, not to mention Jimmy himself, all dedicated DJ’s and producers influenced by a passion for dance music. Their recently launched site immerses you in a colour drenched symbolic world of an ancient culture, reborn and reimagined for the digital age. The elusive heads behind the label were hard to track down, but here at KALTBLUT we managed to get both Alfred and Jimmy on the phone, where they revealed the story behind ‘Ultramajic’, the ideas of black magic, symbolism, and myth that inspire their visuals – and why they don’t mind if people think they’re the Illuminati…

KALTBLUT: Congratulations on the website release – can you tell us a little bit about the genesis of the ULTRAMAJIC label itself?
Jimmy: Ultramajic was an idea that had come to fruition from just working in the music industry, and wanting to have an outlet to release music. Instead of relying on other people to promote and be passionate about our music, we just decided “Why not? Let’s get rid of our mental limitations and just do it.”
Alfred: It’s the typical ‘born from passion’ type of story!
Jimmy: The core of Ultramajic is definitely the artwork. So we just decided to take these seemingly unrelated worlds, with the ideas that we portray in the visual art, and combine it with the music. We just wanted to bring them together, and create an entire world around that.

KALTBLUT: Obviously you all come from similarly creative, yet very different musical and artistic backgrounds and projects – what brought you together as individuals to form a collective?
Jimmy: Well I had met Pilar through some mutual friends, and then discovered that she was doing artwork that I already liked. So it just made sense that we would start working together. At the time I was developing this digital airbrushing style, and 3-D design, and she was working on collage. But the thing that tied it together is we were both really into mystery school teachings, and Egypt, and metaphysical philosophy, so we just started obsessively going through books to try and tie it into the artwork. Basically what we were doing is kind of rebranding a kind of new age subculture.
Alfred: I feel there’s no other platform with interesting, contemporary, cool music that has this aesthetic going with it. We’re kind of the only ones exploring that.

KALTBLUT: You’ve described your new online site as a ‘portal’ – what was the idea behind this, and what do you hope to give people a chance to explore?
Jimmy: I think a portal’s an interesting concept, because it’s the concept of a doorway that leads you to a new reality. And I think this is an element that we try and embody, because we’re pulling symbols and elements from all types of interesting philosophies and teachings, so we hope that the artwork is this portal that makes you wanna research what all of this means, and how it ties into today’s world.
Alfred: It really opens up people to a new way of thinking, when you introduce them to a new world that they haven’t seen before. And I think that’s a really interesting thing to do, to make people think like that.
Jimmy: We use a lot of symbols, and constantly we’re getting accosted by people who are not only interested in it, but we also get people that like to say that we’re part of the Illuminati, which is interesting – it’s gonna happen.
Alfred: I feel like even creating that sense of mystery itself helps…that’s part of what we’re all about!  It just adds to our mystery.

KALTBLUT: Your name immediately conjures up otherworldly, magical visuals – what were it’s origins and how do you feel it fits in with how the label has developed since?
Jimmy: Well, basically the day that we decided to do Ultramajic we were in Argentina, sort of on this UFO adventure. We went to this paranormal city, where a lot of the locals see flying objects in the sky all the time, and there’s this area where they say a fourth dimensional city just appears every so often. I was just really fascinated by this, and then I basically turned to Pilar and was like ‘You know what, let’s just start a label. Fuck this, let’s just do it’. And then we were watching X Files, and there was this document that came up which was referring to ‘Majestic 12’, which is this committee organised to oversee all extra terrestrial activity. And this paper comes up and it says “For Majic eyes only”, which was referring to Majestic 12. And I really liked the concept – I don’t really believe in it because I think knowledge should be available for everyone. But at the time I just really liked this concept, that’s sort of hands off to everyone who is not ready to handle it.

KALTBLUT: A lot of what you’re doing with Ultramajic seems to stem from a desire to give the power back to the people – how do you feel you’ve experimented and explored using the internet to push new boundaries?
Jimmy: It’s really the only way that we can communicate with people in our generation, because we come from a more introverted generation, which is connecting on the internet. So this is the way we know how to connect. But in a way, I find it really interesting because the way that people use Facebook and Instagram – they’re basically digital altars for the magical self. They’re able to become who they want to, they’re able to portray themselves however they want.

KALTBLUT: Moving over to the music side of things for a moment – with this being such a unique collective can you tell us what you are you drawn to in the artists you release – what is about their energy, and what they’re creating that fits with the ethos of the label?
Jimmy: Generally we’re just looking for people that we get along with, fresh, innovative, and obviously not using the same elements that we’ve done already. It’s pretty much that simple, as long as we like it, that’s cool.
Alfred: Ultramajic is not so much a sound as it is an idea. A drive to be innovative and creative, and making something new that stands out. So it’s not like you can pick out a certain sound, but you can definitely pick that idea out of it, and it’s all cohesive with that vision.
Jimmy: So a lot of the music we’ve released is dance music. But this was kind of the plan, that we come out of the gate straight away with some really hot dance tunes for a couple of years, and then we branch out. I think it’s sort of a template that a lot of my favourite labels have done, and since we all come from dance music, I think it seemed appropriate, so that’s why we did that.

KALTBLUT: In terms of your personal politics regarding the music industry, do you feel it is important for independent labels like yourselves to keep establishing themselves against the mass, more corporate entities?
Jimmy: Yeah exactly, my advice for any record label is don’t release anything that you don’t love or you wouldn’t play yourself. There’s just no really good collaboration going on between artists and musicians as much as there should be. This community – it’s about people coming together, and collaborating.
Alfred: And making great art – and not just for the sake of making art, but making great art that’s gonna push other people to a new level. Jimmy: We’re obviously not in it for profit. There’s no money in record labels, basically. This is a labour of love. So you need to have the passion – if your eyes are only on success it’s not gonna work, because I genuinely believe that people are really fresh these days, and they can tell when you’ve put passion into something. We’re doing this for the community. You know we don’t really get any fame or much recognition out of this.
Alfred: It’s about accelerating culture.
Jimmy: We really believe in this art culture, we really believe in the music, and bringing people together, and we’re constantly researching new artists and connecting with them – and we’re all about good vibes.

KALTBLUT: What direction do you hope to take things in the future with both you’re music and the artwork you’ve created?
Jimmy: We’re just continuing making content for Ultramajic, we’re concentrating more on doing videos these days, because it’s more effective on social media, and we have more fun doing it. And we have a lot of big ideas that we want try out this year, because we’re kind of ‘spreading the wings’, so to speak, and trying different stuff.
Alfred: I think one of our big main goals is to build a community. We kind of stopped using PR for the most part on our upcoming releases, because we feel that more direct contact with people like you is much better. And not only that, but most of our PR budget is going towards making art, so that we can share it. Because it’s more about the people when it comes down to it, and how they feel, rather than critics, and things like that. Those just come along.

KALTBLUT: Do you feel that the ‘Illuminati’ accusations come from a place of fear of the unknown – and that this enforces your world as a place for those that are ready, to explore, and question, and think beyond the ‘normal’?
Jimmy: I mean the whole ‘Illuminati’ discussion is just – it’s irrelevant for me because yeah, okay, there’s people in charge, and there’s probably people with a lot of power, and greedy people coming together, but essentially all that matters is the core of people’s beliefs. And just the fact that people think that there’s some people in charge, is just making it a reality – it’s just giving them power. But I think the point is to give the power back to the people. But that’s to each his own responsibility to discover that. And I think that kind of relates to our artwork because we like to really empower people subconsciously. I’ve read up a lot about Black Magic, and it definitely exists, and we all partake in these things on a daily basis, so it’s just important to be conscious about those things.

KALTBLUT:  Do you feel this authenticity and belief in furthering cultural exploration translates to the artists that you usually attract and that want to work with you?
Alfred: I think authenticity is extremely potent, people can smell it, they can taste it! They know when you’re being real, and they know when you’re pushing something that you’re not completely passionate about.