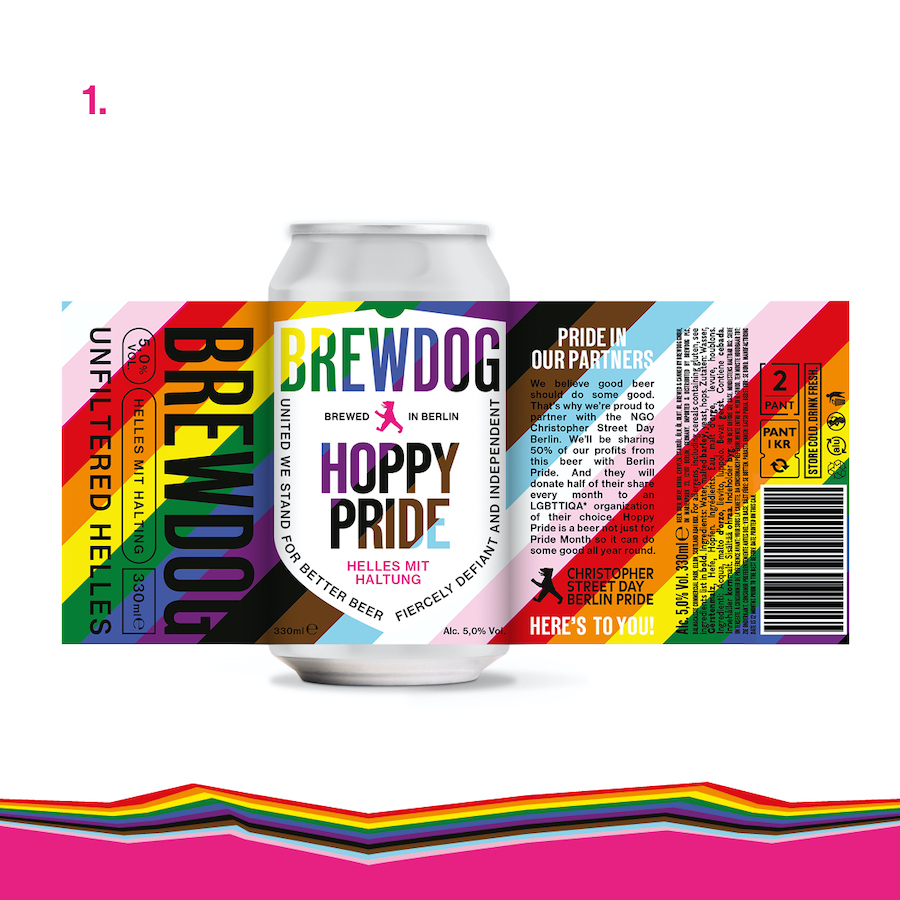 Black with the Berlin CSD logo, white and pink or colorful with a rainbow look? BrewDog Germany and the Berlin CSD e.V. give their communities the choice. When the largest German social demonstration parade finally pulls through Berlin again on July 23, 2022, the Scottish brewery will be in the front row to provide support. With the joint collab beer “Hoppy Pride”, BrewDog Germany and the Berliner CSD e.V. are taking the popular and worldwide happening as an opportunity to do good together and manifest their attitude towards a more tolerant society.

Hoppy Pride, however, is about more than just a beer partnership. The “Helles mit Haltung” (Ale with Attitude) is not only a fantastic, modern beer with the usual high quality – it is also a promise to work together to strengthen the German LGBTTIQA * community in order to turn not only our fridges, but also our society into a more open, queer-friendly and tolerant place.

• Winning design will be unveiled at joint event in March

“BrewDog and the Berliner CSD e.V. are supporting a great cause with ‘Hoppy Pride’. We are inmmesly proud to be able to support the entire community with our creativity and passion,” says BrewDog CEO Adrian Klie. “BrewDog positions itself clearly, explicitely and permanently for an open and diverse society. That is why raining awareness of the topic of diversity is at the core of our agenda all year round – not just for a few days a year. ”

“We are one of the largest socio-political brands in the world. The global demonstration around the Christopher Street Days and Prides worldwide have ‘come into fashion’ for many brands ”, says Berliner CSD e.V. board member Patrick Ehrhardt. “Therefore, we are very pleased that we have found in Brewdog a brand, partner and ally who strives to make us visible, supports us and also believes in a long-term partnership that supports us – and with that also the scene – not only financially, but also in terms of content.”

“Hoppy Pride” came to stay. The beer marks the start of a long-term collaboration between the two initiators and their communities. BrewDog and the Berliner CSD e.V. share the profits equally. Additionally, a German group, an association, a collective or an initiative from the LGBTTIQA * spectrum is supported with financial means every month. Organizations meeting these requirements can apply as of now until the end of February to the Berliner CSD e.V. via vorstand@csd-berlin.de . Both parties involved additionally aim to win over trading partners for the cooperation who are not shy to display their attitude by selling Hoppy Pride. If you are interested, BrewDog can be contacted at kontakt@brewdog.com and the Berliner CSD e.V. at office@csd-berlin.de.

The vote on the final design of the joint beer “Hoppy Pride” runs until January 31, 2022. Via https://bit.ly/hoppyprideyoudecide everyone can participate and vote anonymously for their favorite design. The final design will, however, remain a surprise until March: BrewDog Germany and the Berliner CSD e.V. will then present Hoppy Pride sporting the winning dress at a joint community event.

The Berlin Christopher Street Day (also CSD Berlin | Berlin Pride) is an annual demonstration in Berlin for the rights of lesbians, gays, bisexuals, transgender, transsexual, intersexual, asexual and all queer people. The CSD Berlin is the largest street parade and demo in Berlin and Germany and is considered one of the largest of its kind in Europe and the world. The first Berlin CSD took place on June 30, 1979. With the 44th edition in 2022, the happening is bringing hundreds of thousands of people onto the streets of Berlin. Every year, the Berlin CSD e.V. raises through a democratically organized grassroots forum their political, civic, and economical demands. Being a political demonstration, Berlin Pride is not eligible for funding and is therefore dependent on donations and sponsors. More about this can be found here: www.csd-berlin.de

BrewDog was founded in 2007 when two men and a dog set out on a mission to revolutionize the beer world. Tired of the uninspiring beer scene in Great Britain, the two founders, Martin Dickie and James Watt, started brewing their own beer as homebrewers – to excite their friends as much about beer as they are. Today BrewDog is the leader in craft beer and one of the fastest growing companies in the UK, with Punk IPA being the number 1 craft beer in the UK and Europe.

In 2010, the first investment round of the crowdfunding campaign Equity for Punks took place. The initiative has now raised over 90 million euros in several rounds – more than any online crowdfunding campaign before. A community of over 200,000 Equity for Punk shareholders enables BrewDog to grow without having to sell itself or its ideals.
Since 2020, BrewDog is brewing the complete headliner range for Germany, Punk IPA, Pale Ale, Elvis Juice, Kiezkeule and Lost Lager, as well as many special beers for the German and international market in the brewery in Berlin-Mariendorf. The company now exports beers to over 60 countries and operates over 100 bars worldwide as well as breweries in Ellon (Scotland), Columbus, Ohio (USA), in Berlin and in Brisbane (Australia).
BrewDog is Co2 negative since 2020. This means that the company compensates twice as much Co2 from the atmosphere as it emits. Further information on the “BrewDog Tomorrow” initiative is available at www.brewdog.com/eu_en/tomorrow