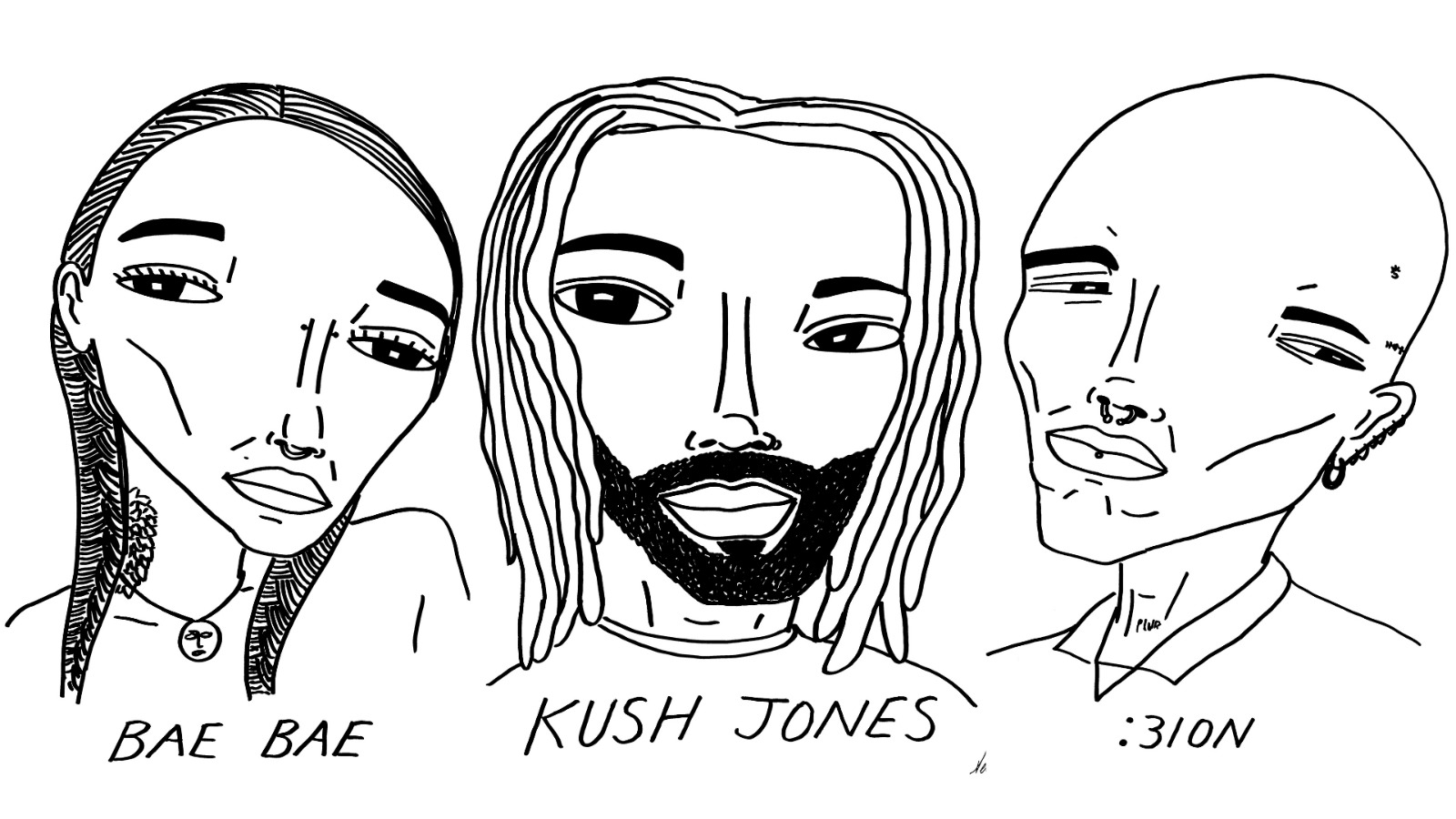 In conversation with :3LON, BAE BAE and Kush Jones ahead of the 3’Hi x Refuge takeover presented by KALTBLUT

On Saturday, the 1st of May – a really significant day in Berlin, KALTBLUT will be teaming up with 3’Hi and Refuge Worldwide to present a nine-hour programme-takeover. The takeover is running in aid for the restaurant, Kreuzberger Himmel, which was initiated by the Be an Angel eV association and has been a fixture in the Berlin restaurant scene since January 2018 with its team consisting exclusively of refugees.

KALTBLUT caught up with :3LON, BAE BAE and Kush Jones, three of the artists taking part in the takeover, and George Patrick, the founder of Refuge Worldwide.

KALTBLUT: Your music is considered an ongoing exploration into futuristic and dystopian themes with an influence of classic anime and fantasy role playing games. Can you tell me a little bit about that?

:3LON: Music for me is escapism, it’s a portal directly into the imagination of the artist. My imagination is fuelled by the things that interest me. I’ve ALWAYS been into anime and video games, they play a major role in how I perceive the world around me. When I make art using those influences it’s a comfortable place to pull inspiration from.

KALTBLUT: I’m very curious about the “dystopian /, Robot type world” you’ve created for your last project. How did you come up with that and how does it differ to our world?

:3LON: I’m always thinking about future concepts and what that means for black people. I often think about the advancement of technology and concepts of singularity. These are the discussions I have with my peers and family. Futurism for me is not so much about creating a different world, rather questioning where this world will be a thousand years from now with our current trajectory.

KALTBLUT: What are your musical influences and how did you get into music in the first place?

:3LON: I’m a music nerd, I love music. Any Genre, any place in the world. I love it all. It’s always been that way for me. My first few albums purchased ranged from Techno to Nu-Metal to R&B… I’m all over the place. I started singing with my mom just for fun, then she would make me perform for her friends and I really fell in love with that energy exchange, so I worked at it for years and years until I figured out what I wanted to do sonically.

:3LON:: Expect a fluctuation of emotions. I want to make listeners rage, but also cry!

KALTBLUT: When and how did you get into electronic music?

BAE BAE: I got into electronic music growing up on 90s and 00s R&B and Hip Hop. I am very inspired by Timbaland, Bad Boy Records, and other producers at the time who were creating chopped up and flipped hip hop rhythms, layering them with “futuristic” sounding synths, and black women’s vocals (like those of Aaliyah, Total, and SWV). It felt like an extension of the electronic infused music of artists like Zapp & Roger and George Clinton. I love how these musicians were taking the imaginative energy of science fiction and electronic music and creating their own ideas of the future.

KALTBLUT: You focus on producing and spinning music that’s empowering black femme and them artists. Can you tell me a little bit about that?

BAE BAE: As a black queer femme I center other people who are black and identify as femme in my djing, production, and in the parties that I throw. I am always thinking about what sounds and music make me want to move my body and what will (by extension) move the folks I am in community with. Though the artists I play aren’t always “black” or “queer” or “femme”, I like drawing on a wide array of material to make a messy fabric of sound that feels like it challenges dominant frameworks. For this mix I leaned into selecting more “noisy” sounds, and sounds that center around the drum patterns (especially footwork). Noise and drums are an outward facing call for resistance.

KALTBLUT: You’re working on creating safer party spaces for black, indigenous, and QTIPOC folks in LA. How’s that going with the horrible impact the pandemic has on the clubbing industry?

BAE BAE: Though the covid pandemic has forced clubs and event spaces to shutdown, this period has given me some space to slow down and consider the way that I convene spaces. The rest was needed because I was kind of running myself into the ground organizing events. I am hoping to be coming back and able to find more accomplices to do this work with, who I’ve met in online community. It’s something that’s very hard to manage alone. What I am hoping for is space for creating collectivities.

BAE BAE: In this mix I was interested in weaving together sounds that feel impactful, like they could energize anti-capitalist resistance. Though it starts slow, with Keiya’s track “No Gravity” to consider a weightless effort of love (resistance can be quiet and internal), it goes quickly into it’s more racing 150bpm footwork rhythms. I included a lengthy clip from a track by Speaker Music (“On Bloodthirst and Jungle Fever” ft. Ariel Valdez and Catalina Cavelight) to highlight the importance of considering the coercive labor of slavery and slave rebellion as part of the history of labor exploitation. It’s a reminder that we consider slavery and the expropriation of indigenous land when we consider global workers’ struggles today.

KALTBLUT: You’ve learnt computer based music production in an after school program as a teen. What sparked the interest to produce electronic music at such a young age?

KUSH JONES: It was a class that was offered so I initially looked at it as just something to do. I always grew up listening to music but having the knowledge and enthusiasm to make music is what kept me going. It became so much more once I took the information and allowed it to work in my life.

KALTBLUT: Your sound is often labeled as juke or footwork but your music carries elements of various different genres and styles. How would you describe your sound?

KUSH JONES: Pretty difficult for me to put into words. I like Boo Williams, DJ Manny, Nu Era, Dego if that’s helpful. I have been using more machines to create and step away from the computer. Got popular starting out for sampling funny Vines and popular tracks but I made an effort to focus on more original work. Also every song I make starts on the one you just gotta find it sometimes.

KALTBLUT: How does the scene differ in the US, compared to Europe?

KUSH JONES: Y’all got kebab everywhere. That’s so fire to me.

KUSH JONES: I don’t really know how to describe it. It came from the heart though. Hope the listeners like it.

KALTBLUT: Refuge Worldwide is a very young independent station. Were you always planning on starting a station or was that something the pandemic “inspired”?

George: We originally started the project as a series of soli-parties, fundraising for refugee shelters in Berlin. A year or so after I moved here, the Syrian refugee crisis was peaking and as a club promoter it felt like the easiest way to help was with fundraising. Soon after we were fundraising for various projects across the city, involving various non-profit and grassroots groups working with homelessness, young persons, and people fleeing domestic violence. Since the first lockdown our events are obviously cancelled, and this meant more energy was available to put into online work. The radio station idea evolved and eventually we were able to find enough time and resources to launch in January 2021, creating a platform to amplify the music, people, and issues that we care about.

KALTBLUT: Are you planning to keep the station going when our lives are somewhat back to normal?

George: The station is here to stay, and we are opening a new studio on Weserstr in Neukölln in June. The studio will enable us to be online for more hours, to produce more shows, and to offering training and workshops in creative industries for our local communities and marginalised persons.

KALTBLUT:Can you tell me a little bit about the takeover and the significance of the 1st of May in Berlin?

George: Officially, May Day or May 1st, is International Workers’ Day. More broadly, it is a day of solidarity and unit between many left-wing and socialist groups involving demonstrations, protests, events and festivals. May Day to me is inherently anti-facist, it is a day to voice concerns about the direction that capitalist interests are taking us, and it is a day to come together under common banners to preserve the rights of workers everywhere.

Our live broadcast is a celebration of music, but in addition, we will be have a collaborative t-shirt on sale (designed by Badly Drawn DJs), with proceeds going to Kreuzberger Himmel. Kreuzberger Himmel is a Berlin-based restaurant run by refugees, producing high quality meals for the Berlin homeless community.