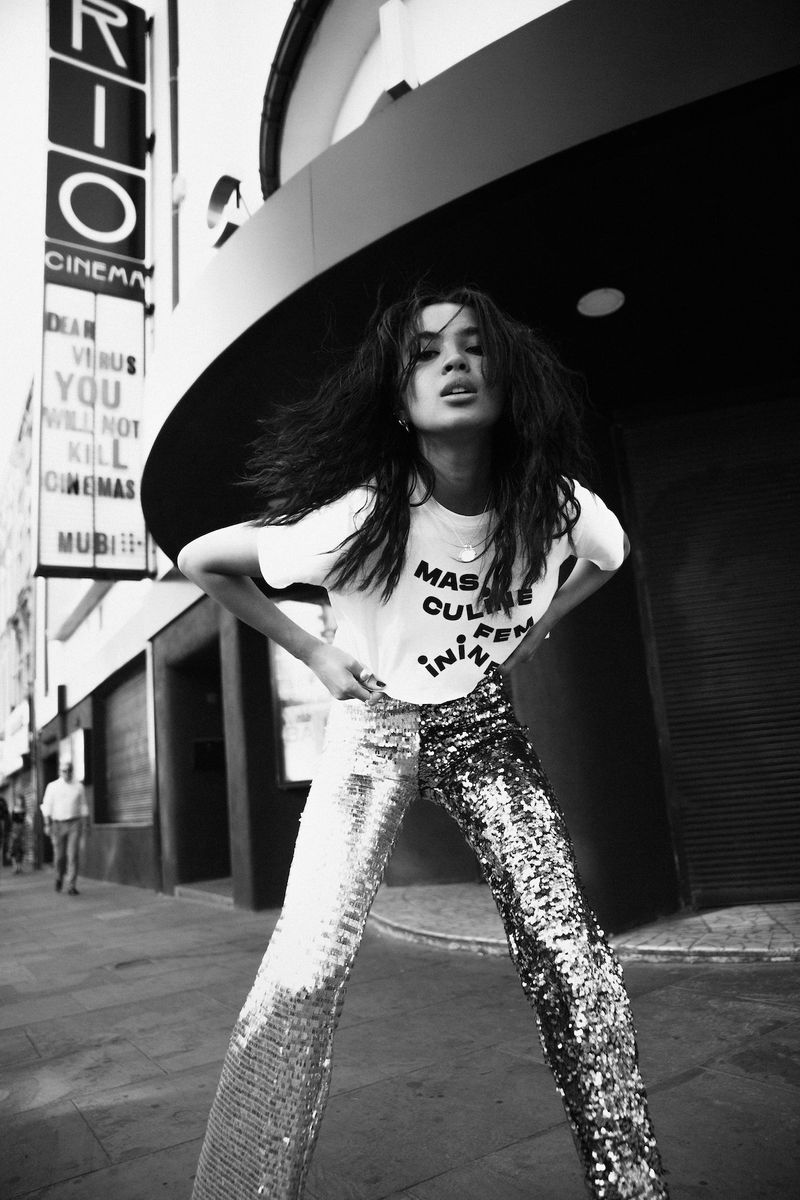 British singer and guitarist Aziya has just released her highly anticipated debut EP We Speak of Tides, which features five tracks of melodic, empowering rock songs. After a year of lockdowns and not playing gigs, the singer has spent her time working on her debut EP and hosting several livestreams, including her own IGTV series Across The Tracks. Her talent has already been recognised by Grimes, who has reposted her version of “Oblivion” and US superstar H.E.R, who invited her to perform on her Instagram live last December.

KALTBLUT caught up with Aziya over Zoom where we discussed her debut EP, how she got into playing guitar and whether or not she has had any guitar role models growing up.

KALTBLUT: You’ve just recently released your EP, and first of all, congratulations! It’s a very guitar-heavy EP, which I think is now also your signature sound. When and how did you get into playing the guitar?

Aziya: I got into playing the guitar when I was around ten I think. I’d always grown up with loads of musical influences and loads of different genres being played in my house, like System of a Down for example. I was always exposed to music and I was always singing little melodies and stuff like that. And I guess my mom was like Oh, like maybe like, let’s get you some lessons and see what happens. I think it just immediately unlocked this door of like, cool, I have something to accompany these little ideas that I’m singing all the time.

KALTBLUT: Did you already start writing songs back then too?

Aziya: Yeah, I thought I was creative. I would write songs about non-existent lovers? (laughs) But to be fair about myself, I think I was trying to be existential and I think I even wrote a song about my brain or something like that.

KALTBLUT: You’ve said in a recent interview that you didn’t have any guitar role models growing up, can you elaborate a little bit on that? And do you think that’s changed now?

Aziya: I don’t think I didn’t have guitar role models, I was always inspired by guitarists like whether it was Jimi Hendrix or Jimmy Page… But I think it took me getting into my teen years to discover more females that were playing the guitar. I had to look for them, I guess. It made me reflect on the idea that I don’t want that for the next generation, for them having to dig for people that look like you. That resulted in me saying that I wanted to do this.

As we progress, there’s more of us standing up. There are more platforms that are enabling other guitarists and females to have their place. I think social media is really good for that.

KALTBLUT: And do you think the industry has changed? Do you think there are more females now? Or do you still feel like you’re alone?

Aziya: I don’t think so. As we progress, there’s more of us standing up. There are more platforms that are enabling other guitarists and females to have their place. I think social media is really good for that. There are so many artists that I’m seeing that probably wouldn’t have been discovered without these amazing platforms. So, yeah, I think it’s changing.

KALTBLUT: You’ve already mentioned social media. It’s really interesting, because, in a way, your career kick-started via social media. Do you think social media has made it easier for artists nowadays to showcase their artistry? Or has it made it harder?

Aziya: I think it’s the first one. I think it’s where you do it as well. I’m an advocate of staying true to yourself and finding what it is that makes you you.

Sticking through that and staying strong is the main way that you’re going to get people that resonate with you. But it is hard, it is really hard to do. I think it’s becoming easier with platforms like TikTok for example. But it’s still really hard. I guess, overall, I’m on the fence because it can go either way. You can go with the times and invest in these social media platforms. But I just think it’s important to just stay true to whatever you feel is right for you.

KALTBLUT: Yeah, that makes sense. You’ve played loads of live streams throughout the last months. And I was wondering how they compare to live gigs, with an audience? How do you connect to the audience via a screen?

Aziya: It’s a very strange experience because when you finish a song, you would at least expect a little clap after you finish, that’s a natural human instinct. But with live streams, you just get this silence and loads of messages and it’s not quite the same – but it’s been the best alternative from having no live performances at all. But overall, I’m so excited to start playing again, there’s no comparison to live shows.

KALTBLUT: And where do you draw your energy from in live streams? Because when you’re on stage you pick up on the audience’s energy, so how do you do that when you’re playing in your room or your studio with no one there in front of you?

Aziya: For me, when I do like my Across the Tracks live stream, I try to always read the comments or interact with people. It’s the best way of making them feel encouraged and you’re engaging with everyone. I think that’s super important and it continues to build a buzz for myself when I’m playing. But then I also love getting other artists on the stream, because once you get someone else there you already have someone in physical presence there with you while they’re also on screen.

So I think those are the two best ways of kind of getting a small sort of buzz because it is kind of similar to playing live. But it’s again, it’s not quite the same. But it was really good fun to do that over lockdown.

KALTBLUT: Were you able to play any of the songs off your debut EP live already before the pandemic began?

Aziya: Yeah and that was kind of the main reason I went and started doing live streams, because I was performing my EP at gigs and then suddenly lockdown was announced. So for me, it was more of a necessity to start doing live streams.

KALTBLUT: So what’s it like releasing an EP into a pandemic? Is there more pressure? Because now people don’t have anything to do except staying home, and listening to music. So there’s a lot of pressure on artists to either release a lot of music to stay relevant or release really, really good stuff. Did you feel that as well?

Aziya: I think, if anything, the pandemic gave me some time to reflect and slow down. I couldn’t have released my EP in the midst of everything because that would have almost signified a time that I think everyone wanted to swiftly move on from, so I used the pandemic as a means to hone in on the EP.

KALTBLUT: And what is your favourite track from your EP?

Aziya: In terms of the production and sonically I’m proud of that one, and how I produced that one. And I think that will be the sound that I’ll be introducing in the next project. So keep an eye out for the next me! But yeah, that song encompasses what I’m trying to do as a musician, but also the lyricism – It’s got my favourite lyric of the EP, which is “you make you make the damsel in me distressed”, which is a constant 24/7 for me.

KALTBLUT: And as a female singer and female guitarist, what would you say to little girls who want to do the same as you?

Aziya: It’s really important that if you love playing the guitar, if you love playing whatever instrument is, when you start growing up, don’t let anyone tell you that that’s not cool enough. If you have a passion for a little bit don’t fall into peer pressure, just enjoy it and do what you love.