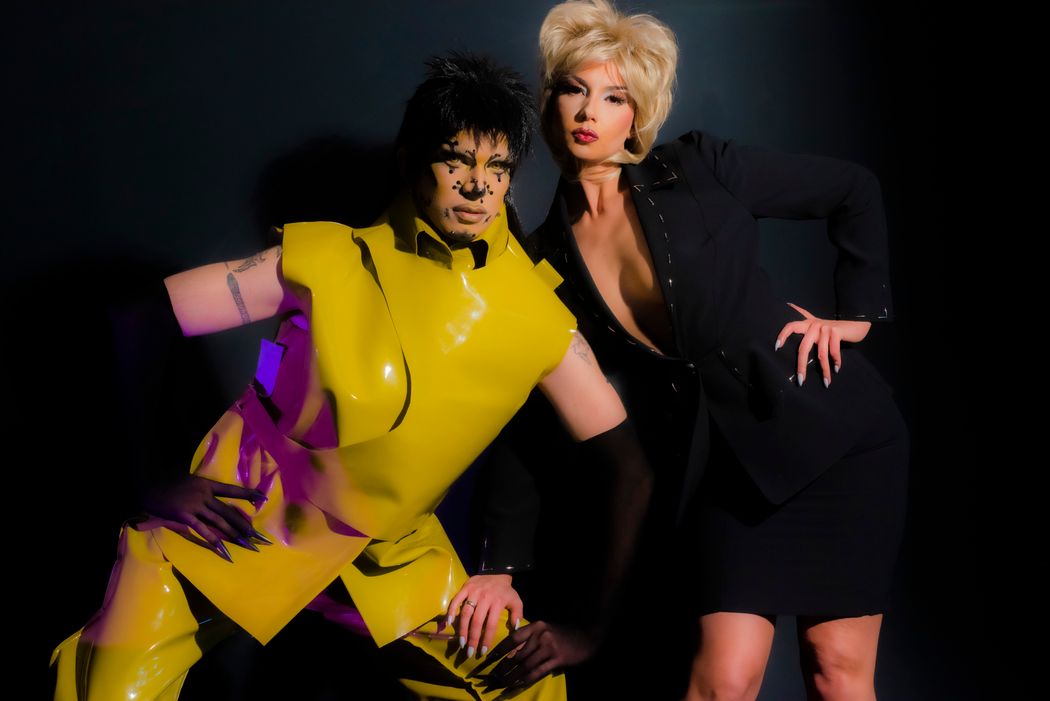 In conversation with Purrja & Twat BUTCHER 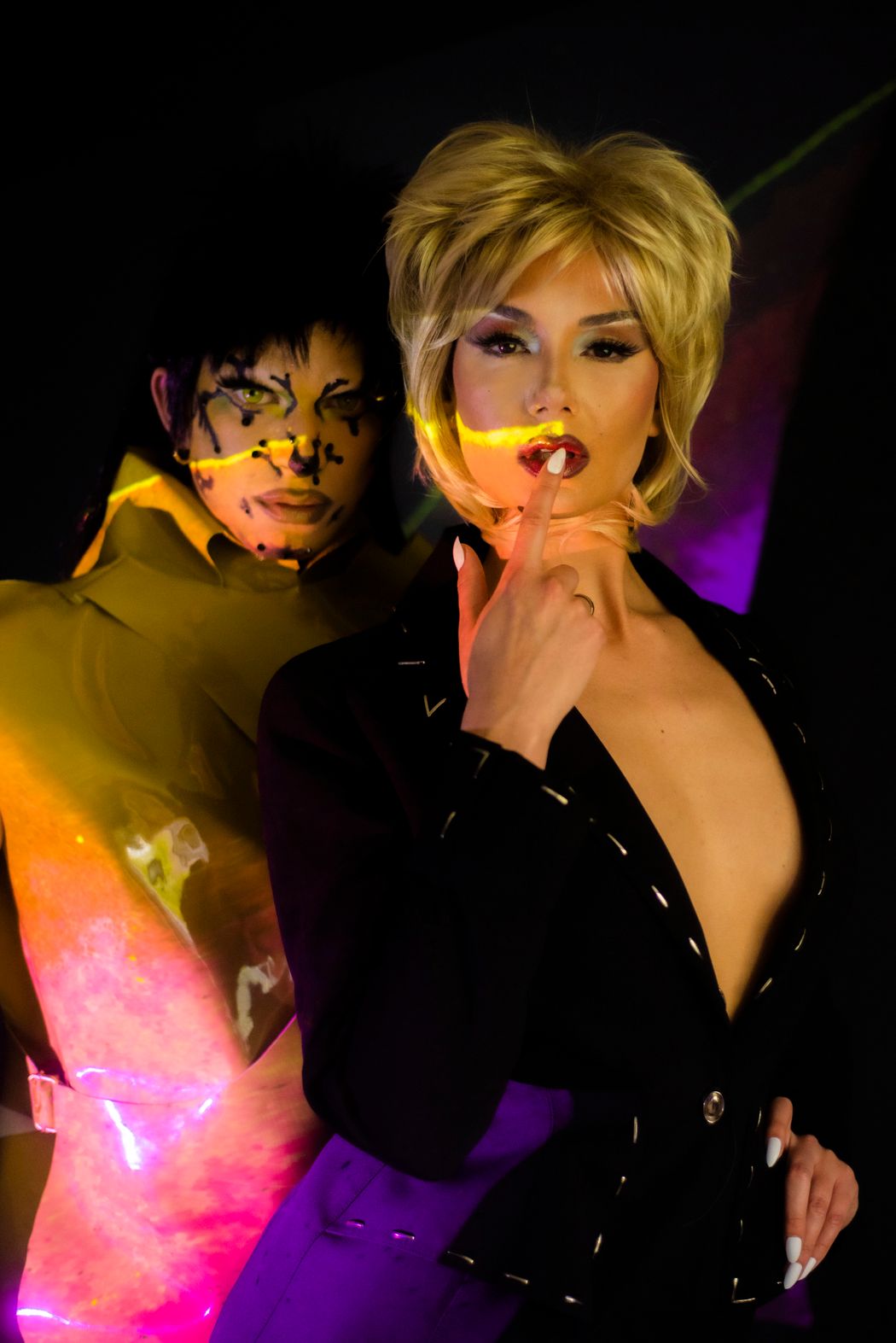 Twat Butcher: It’s a great name, but it’s a play on Pat Butcher for those that don’t know. I’m a Berlin-based AFAB, CIS-identifying, drag performer, dancer, stylist, and one-third of the Flaming Gogos. Before Ms Corona came along, I performed a lot in the nightlife scene. I tend to go by she/her but my drag is sometimes male and sometimes female. What about you?

Purrja: My name is Yusuf, also known as Purrja. Basically, my pronouns are he/him when I’m out of drag and she/her/they/them when I’m in drag. I’m also based here in Berlin, but I’m actually from Ireland. I moved here four years ago now, and I started performing drag since I’ve been here. Since the pandemic started, I moved into doing makeup artistry on a more professional level; As someone who isn’t formally trained in makeup, I self-taught myself everything. It’s been a bit slower to get into the industry, but since last year I’ve been doing more makeup jobs, working on shoots, editorials and advertisements.

Twat Butcher: That’s how it’s been for me and styling as well. I think it’s really nice to have a job that you can make commercial money off of and which is linked to your art as well. I feel very lucky to do something that isn’t completely removed from the things I’m passionate about in my creative outlet. 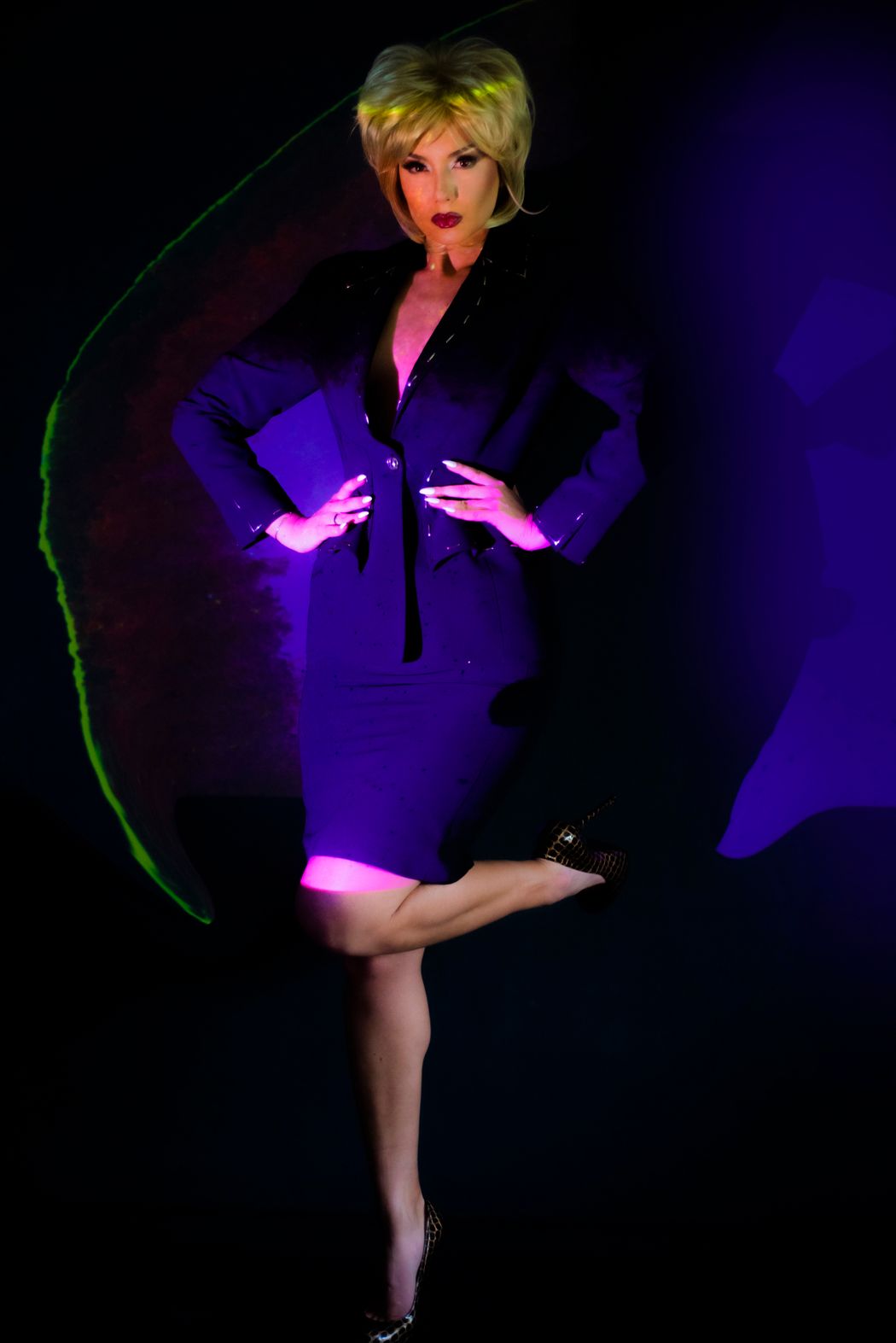 Purrja: Totally. I think both of them inform each other in a way, you know, my drag plays into my makeup work, and the things that I learned from that also play into—and feeds back from— my life as a drag artist as well. So I’m constantly learning in both fields. I guess for both of us, it was quite difficult moving from working and performing so often in nightlife and in clubs to then have that all taken away from us. In a sense we’ve been able to continue to work creatively during the Pandemic; it’s not as much work as I would personally have liked for myself, but I guess expanding horizons, branching out and doing new things has been beneficial in a way. 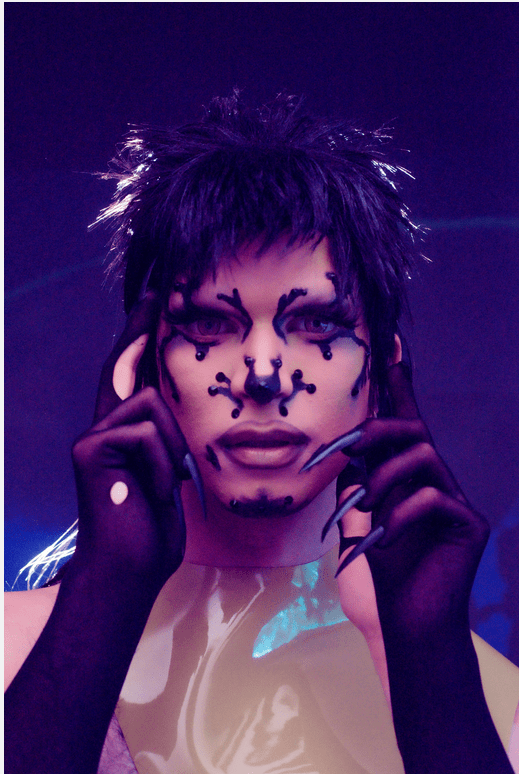 Twat Butcher: Yeah, and the fact that we can still work through the pandemic, doing things we enjoy. Commercial shoots, fashion shoots, all that shit hasn’t stopped because it was easy to work the Corona restrictions around them. It’s been pretty great to be able to keep doing that. So what drove you to create your platform?

Purrja: Before I started doing drag, I had no performance experience whatsoever. I didn’t come from a very creative background; I went to school, and when I finished I studied science because the chemistry was the only thing I was interested in at the time. This is the thing about growing up in Ireland, and maybe you understand this from growing up in the UK as well—you just go through the stages of schooling and it’s just, next milestone, next milestone, next milestone. During that process, there’s no real-time where someone sits you down and says, ‘Hey, what are you interested in? What are you passionate about?’ I remember when I was telling my mother that I was studying science, she didn’t care. She couldn’t have given two shits while I was studying. Do you know what I mean? She’s like, ‘As long as you’re happy. 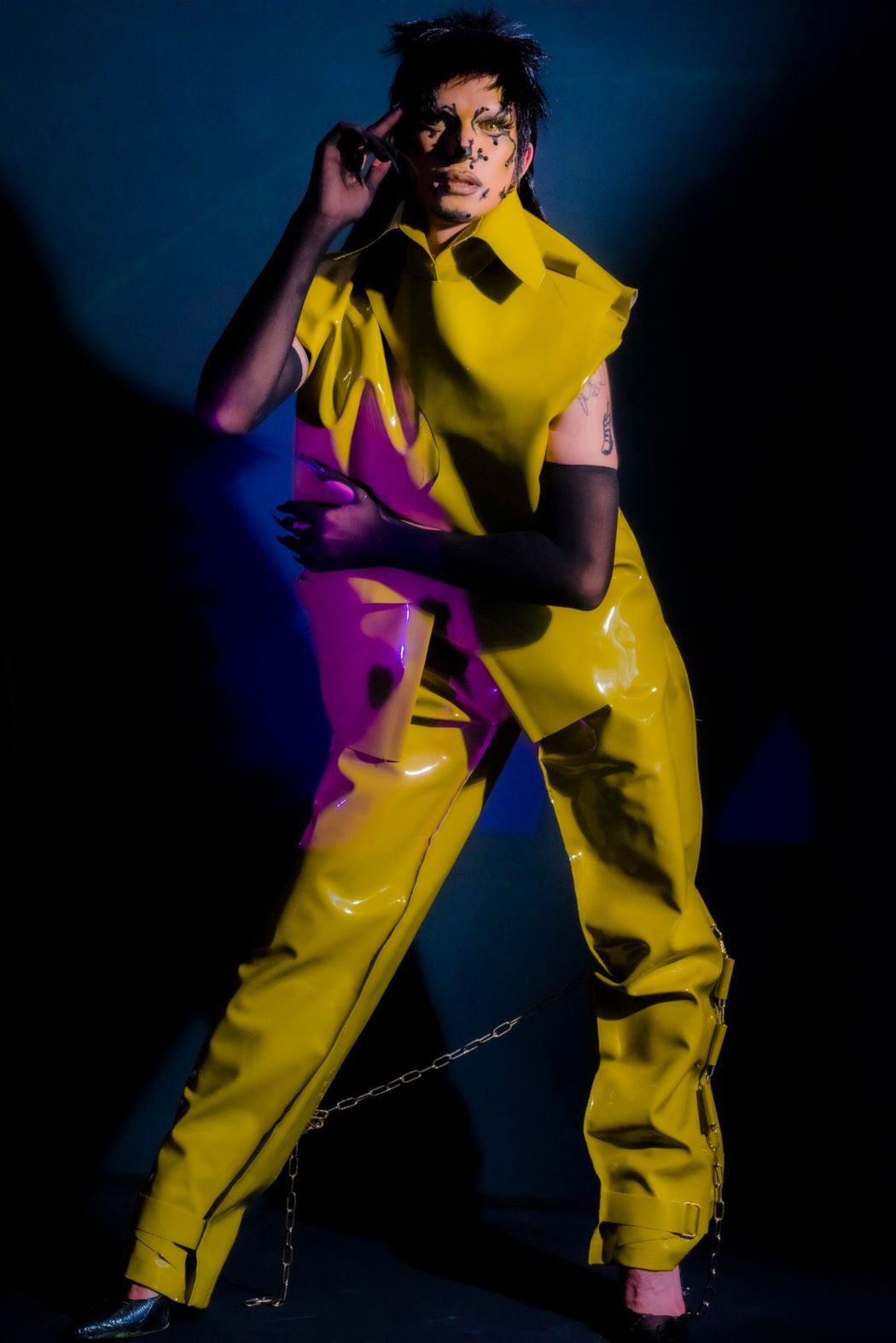 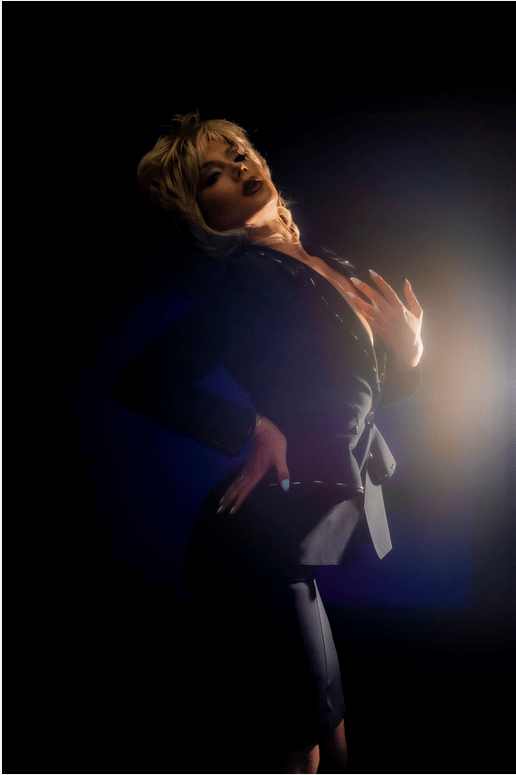 Purrja: I’d come home and be, ‘Oh, I just failed that exam. ‘That’s grand. Don’t worry. As long as you’re happy and healthy, you know? So I never had that conversation with my mother about what I wanted to do, and I guess because of that, I just went and studied something that I was interested in, which ended up being horrible. I hated it. During this time I ended up taking two years off and started working in a wine bar, and I realized that actually, I’m way more interested in alcohol, food and gastronomy. I did that for two years and I really loved it. I started working up the ranks; I was almost a Sommelier at one point in Dublin.

Twat Butcher: I remember when you first told me you were a Sommelier; I’m all about wine.

Purrja: In the first year that I moved to Berlin, I was working in service gastronomy. It was very intense; I had a very stressful year of long hours, neglecting myself and my body and my interests. When I finally found the courage to leave, I said to myself that I was going to do something for myself. I’m not sure how exactly drag was that thing, but I had saved up some money and I just spent 600 euros that week on wigs and makeup and a basic drag case.

I spent the following two months at home, painting my face over and over again, watching YouTube tutorials and photographs and Drag Race, really submerging myself into the art form that is drag and trying to learn as much as possible about makeup. After about two months, I performed for the first time in August of 2018. It was at Judy Lavina Dragaholic; that was where you performed for the first time as well, right? 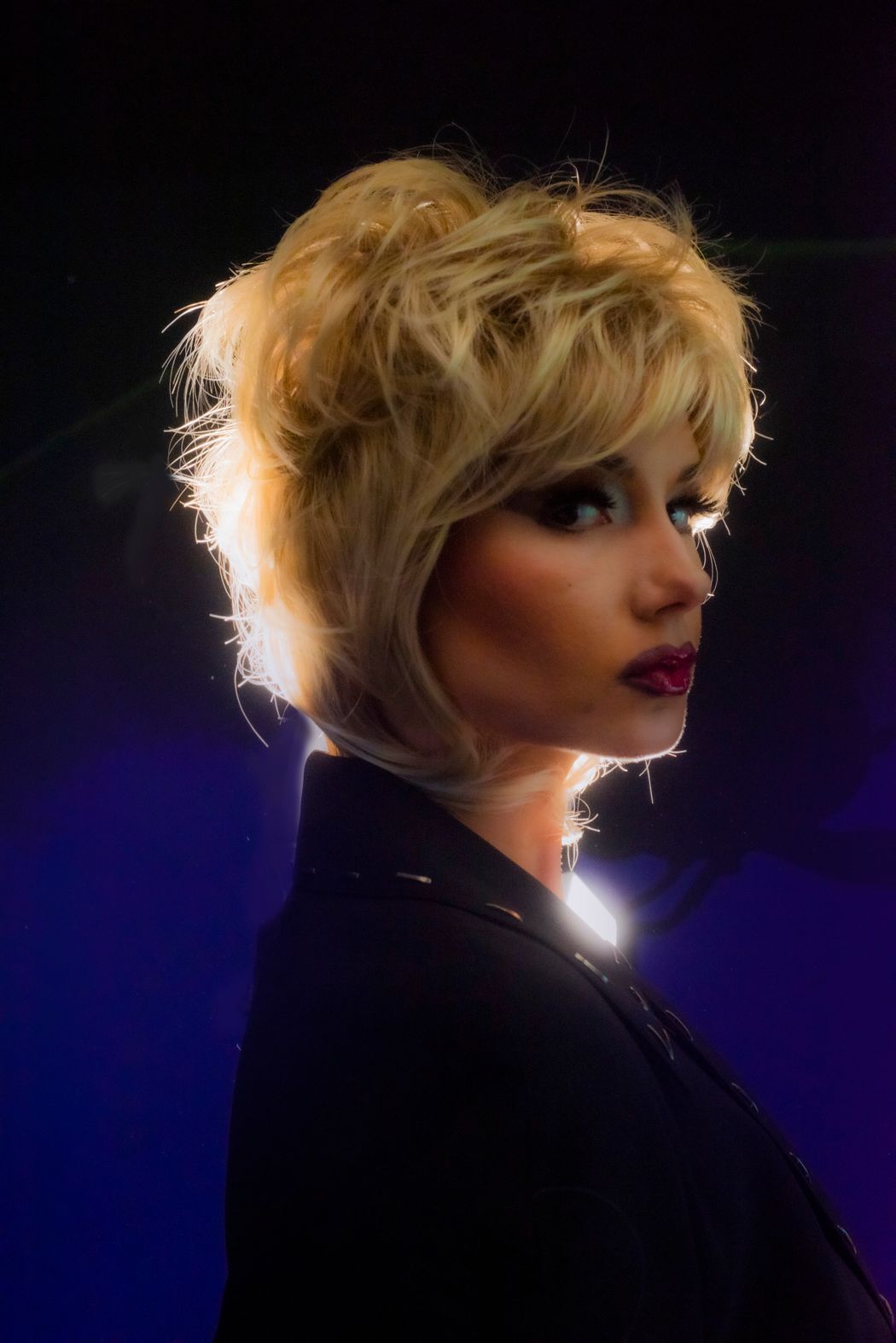 Twat Butcher: It was indeed, either the month before you or after. I hadn’t realized that you quitting your job coincided with this shift toward doing something new for yourself.