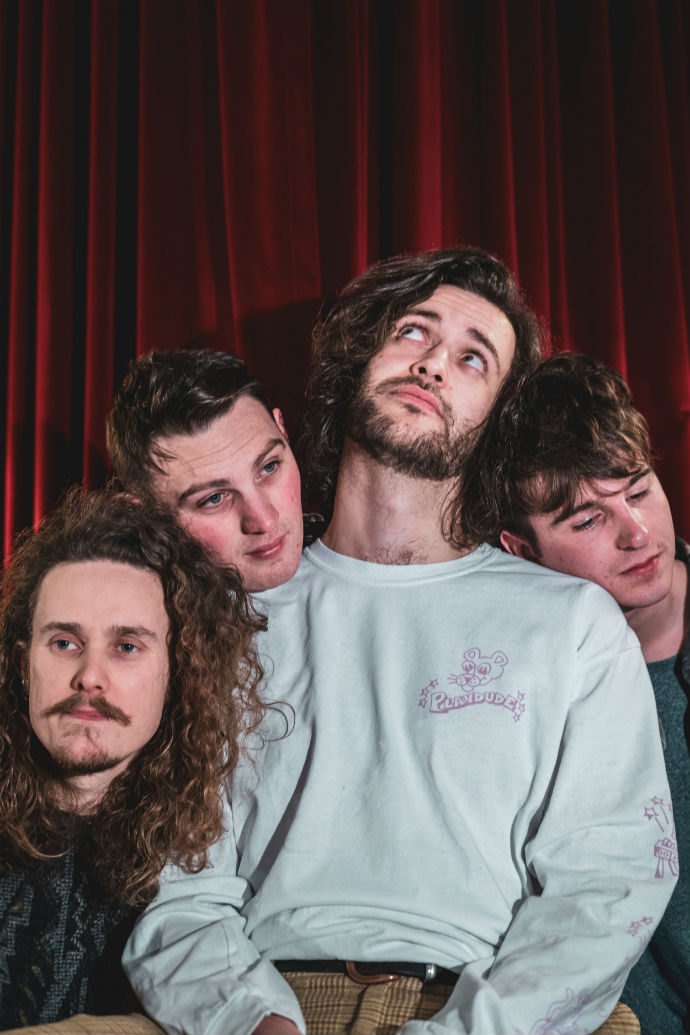 Superego hails from central England and just recently made their debut release this year with “Loose”, a deeply melancholic offering where you feel an immediate yearning. Their unmistakable mingling of shoegaze obsessions with muted grunge sensitivities allows listeners to consume this fuzzy resonance whole-heartedly. As suckers for dark and dreamy 90’s revival, we had to speak with frontman Cam Potts on the beginnings, current state and near future of the band.

Cam Potts: Well, I’d been bandless, yet constantly writing, for about two years and then felt compelled to put a band together. I knew Luke from the Leicester music scene, our bands previous had played together a few times and he was down for getting something going. I asked him to stick a baseline to one of my tracks, he smashed it and got the gig haha. Then I’d been playing with Tom in a garage blues band with a bunch of mates, playing a monthly night at this dive bar in Notts, which was so much fun; and so I roped him in on guitar. And then Luke had played with Samuel before and recommended him, and after exhausting ourselves trying to find someone, he came in, played like an absolute beast, and that was that.

KALTBLUT: What is the narrative behind “Loose”?

Potts: “Loose” comes from the concept that ‘the more you learn, the more you realise how much you don’t know’. The idea that gaining consciousness isn’t just a relief, it’s a weight, too. It also deals with my personal disillusionment with the political and philosophical state of the world, and my own frustrations in life at not knowing enough, I suppose! I like the connotations of the word Loose, too; because it alludes to things falling apart, yet also a kind of freedom, and that’s what I was trying to battle with in this song.

KALTBLUT: …and what things have you learned recently?

Potts: Loads! I have a huge interest in philosophy, psychology and subjects surrounding consciousness; but my knowledge is somewhat lacking, so I’m constantly seeking out different modes of learning about these subjects. I like that philosophy approaches impossible questions that not even science can prove, and I think all of us are, on some level, battling with finding meaning in, and validity for, our lives.

KALTBLUT: What are specific music and non-music related inspirations fuelling the band?

Potts: The non-music fuel is always socially and personally related. I like to make a comment on the social aspects of the world, whether that be political, psychological, philosophical etc but I also just portray my own perception of these things, and how it makes me feel. You only have your own perception, so it’s good to be true to it. The musical inspiration can come from anywhere tbh. I’ll often see bands I’m into at the moment, hear a track and think ‘we need something like that’. but I’ve always been, and always will be, heavily influenced by Radiohead / Jeff Buckley / Nirvana and Elliott Smith.

Ticket Giveaway: Emika “If We Disappear ” Live Show at Zeissplanetarium

KALTBLUT: What can your audience expect next?

Potts: We’ve got three more singles coming out pretty soon this year, and then hopefully going on a tour of the UK in the autumn.