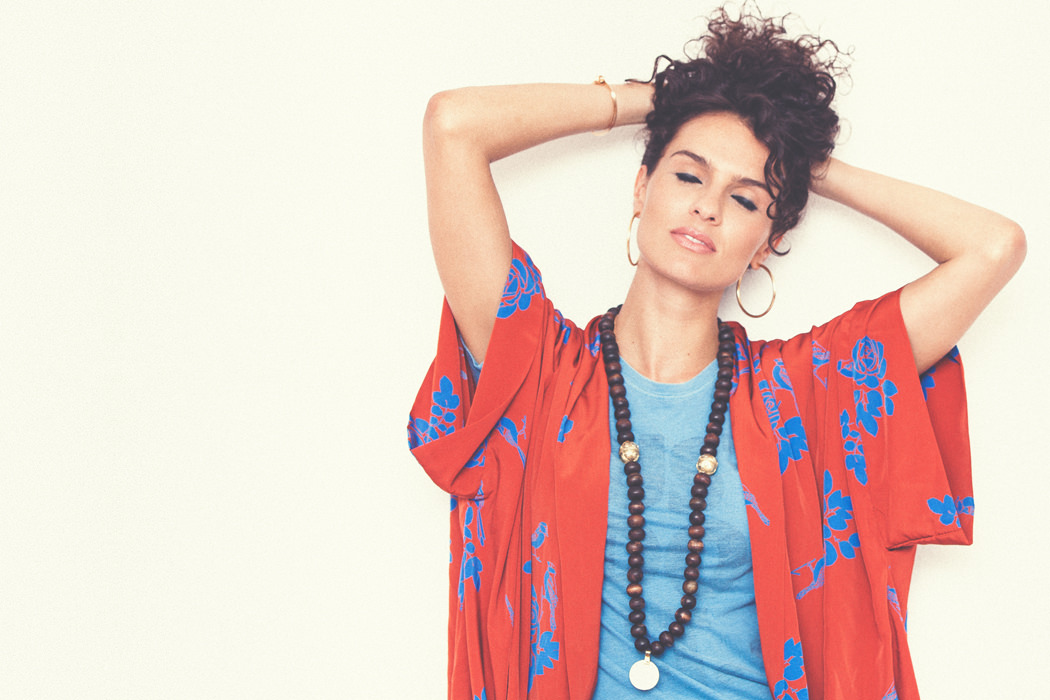 Sweeten your soul with Jen Dale and her outstanding EP “Jimi Otis Bacon & Eggs” an authentic Soul music EP where the natural groove of Jen Dale meets the powerful brass and drums arrangements of Rhythm and Blues. Recorded in the heart of Brooklyn with the old-school producer Brad Williams in a single one-shot, JOBE is the first episode of a trilogy tribute to the musical roots and influences of the Swiss-British singer. Gathering her devotion for Jimi Hendrix, Janis Joplin, Marvin Gaye or Otis Redding and contemporary RnB, JOBE has a unique color that shows depth and growth in Jen’s lyrical style and vocal skills.

She currently lives in Berlin where she hosts a monthly open mic night since 2013. Sharing the stage and her passion for music with new comer talents. Aside from the sound, Jen Dale also evolves in the fashion industry with her hand made jewlery label BIGDADDYELLA.JOBE EP is independently released , out next June 26th on Itunes.

KALTBLUT: How did you start doing your necklaces?

Jen: Through my love for travelling and Turkey in particular, I started collecting materials and special pieces every time I visited. At first the creation process was my downtime from music. Yet, the more necklaces I made the more I realized I could combine the two. I sit in my studio, listen to new beats and make the necklaces while coming up with melodies and lyrics. I try to focus on not focusing. That way I find myself in a pressure free environment. It was and still is my way of zone’ing out and switching off any “thinking” part of my brain.

KALTBLUT: Is the making of an object as meditative as writing music?

KALTBLUT: Did you feel closer to your idols while recording this EP?

Jen: Writing and recording this EP made me feel closer to home, which I guess means I felt closer to the artists who inspire me and whom I grew up listening to. Having recorded everything analog and with my amazing live band in the studio definitely made me feel some Jimi, Otis and Al feelings.

KALTBLUT: In the age of digital and post internet trauma is it a political act to produce music the way you did?

Jen: I wouldn’t necessarily call something a political act, unless it was intended as such. Which it wasn’t, in my case. I wanted to make feel good music with the thought in mind that this would be the first of three EPs that are a tribute to my musical upbringing/education.

Otis Redding, Jimi Hendrix and Al Green are some of the first voices I remember hearing at home as a kid. There’s something about their songs, voices and production that just goes straight to my heart. And music and art that touches the heart is timeless. I don’t think it matters what age we’re in, people will always be able to appreciate and hopefully want/crave timeless music.

And even though this EP was recorded all analog, I’m not sure it would have come into being, if the Internet had not been around.

My producer and I co-wrote most of it via Skype and Whatsapp (see story under producer story). So I guess that is quite the juxtaposition, and giving it the role of a digital and internet trauma rebel would make me a hypocrite :)

KALTBLUT: Why choosing to produce 3 EP against an album format still?

Jen: I like the idea of giving the listener one piece of the story at a time. On a more selfish level, I get to show 3 different sides of me while telling one story. It’s like a tv show. Some actors might change from season to season, but the story continues… And hopefully each season will leave the viewer and listener wanting more.

Having said that, I will definitely take on the challenge of an album when the time is right.

KALTBLUT: Tell us more about how you met your producer?

Jen: Brad Williams and I met through a friend in common, super trumpeter and music everything man, Phil Lassiter. When I lived in NYC I was looking for a guitarist to play my newly released EP, Beginning, with me. Phil said, “this great guitarist from Memphis just moved here and he’s happy to play good music with nice ppl. Give him a call.” During that year, which was my last in NYC, we played shows together almost weekly. When I moved to Berlin in 2012 I was excited to start a new band (not quite aware of how hard it would be to ever match the talent and work ethic of my NYC band) and start writing and recording. But everything didn’t go quite as quickly as I hoped. So, I got in touch with Brad and cried him a little song of frustration. He said: “all good. We can just start co-writing via Skype, and send each other demos and whenever you come back to NYC we can record.” I was like ” you write music too?! How did I not know that when we still lived on the same continent?!” Turns out, he also plays the bass, drums, keys, is an incredible Musical director and producer. I’m sure there’s something I’m forgetting.

Needless to say, that was it. From then on I sent him melody and lyric ideas and he sent me revisions or already finished instrumental compositions back within a day or two.

KALTBLUT: You have studied the music business and yet you release your EP without a Label why no creating your own? It is out of fashion?

Jen: I don’t think it is out of fashion. But, even though I did study music business, books are not the only thing that prepare you for the real life.

Probably like most artists, I find it hard to combine and practice the artist and business part of my brain simultaneously. Especially when it comes to my own music. Although I know that is what is expected of artists these days. I might make that a goal of mine one day but for the moment I’m still observing and learning from the business and my journey as an artist and constantly working on my craft.

KALTBLUT: You are regularly hosting some open mic in Berlin what was your most fabulous discovery?

Jen: The main thing I learned is how grateful people are for live music.

It seems that, no matter how much you can watch online, on your TV, listen to on your phone or radio, there is nothing like being part of a live music experience that needs you, as an audience, (for it) to be great.

KALTBLUT: You are a traveler, what stays in your suitcase no mater what?

Jen: Some of my Big Daddy Ella necklaces and my shea butter lotion…

But other than that, I’m not sure I have a THING like that. I used to have tons of things. But these days I try to travel as light as possible… It lets me travel carefree’er. The more things I have with me (especially clothes), the more choice i have.. And we all know that choice doesn’t necessarily make life easier.. especially if you’re someone who likes to be ready in reasonable time… so I try to avoid putting myself in that situation in the first place, by keeping my bag light. Doesn’t mean, it always works.. but I try.