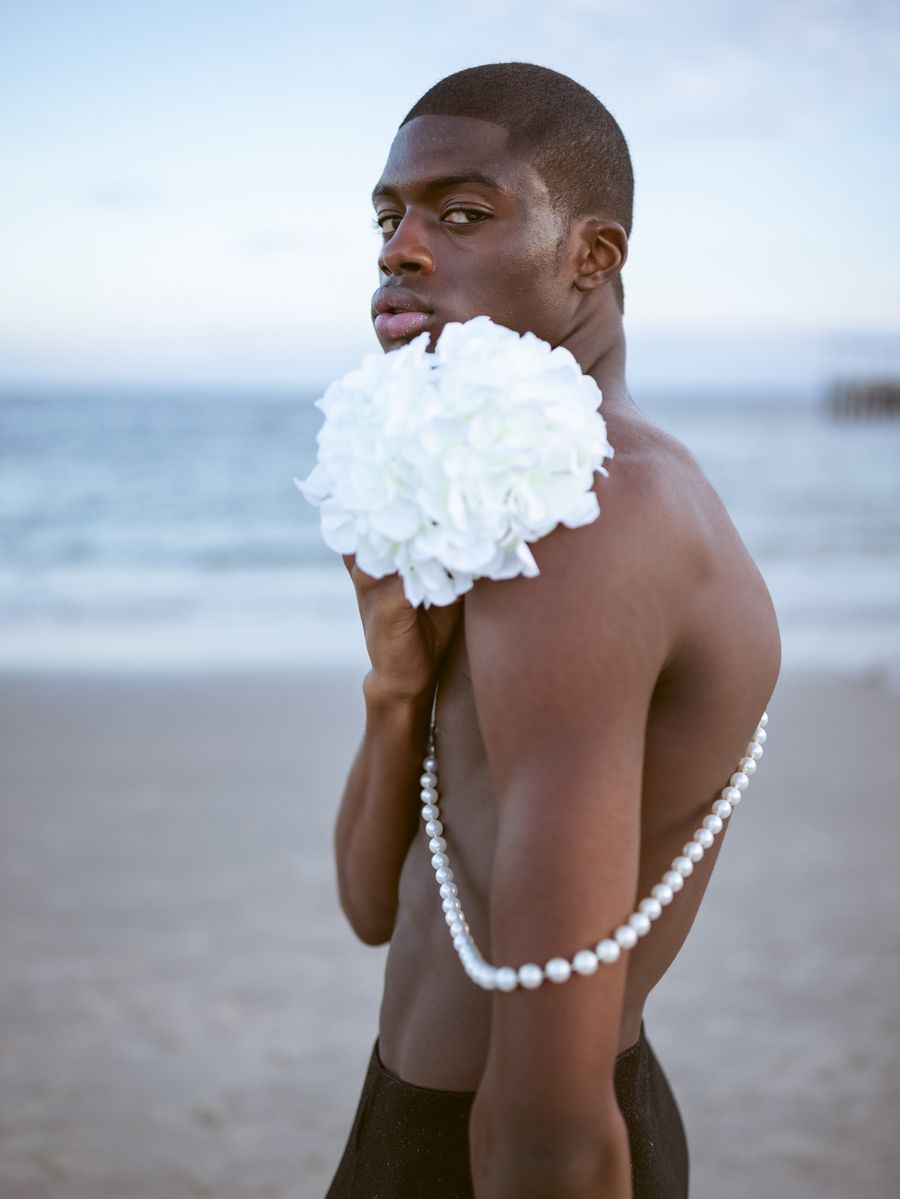 A KALTBLUT exclusive from NY City featuring rising male model star and professional dancer (Juilliard School of Dance), Waverly Fredericks. Photography by Nicole Wilson. A Native New Yorker as well as an award-winning and internationally published fashion and portrait photographer and creative director currently based in New York City. Her clients include top fashion and entertainment magazines, luxury brands, celebrities, as well as emerging talent.  Her photography and creative direction has been seen in and graced the covers of such top fashion magazines as VOGUE, InStyle Magazine, Harper’s Bazaar, L’Officiel, and hundreds of others. Her favorite part of being a photography is uncovering people’s unique beauty and telling their stories through a cinematic narrative of photography.

“Midnight, Salt and Sea” is the story of a boy returning to nature,  and getting back in touch with the land, to nature, to what is wild in each of us. And indeed the boy becomes a part of the landscape, expressing the beauty of ourselves in our most stripped-down, natural form. I specifically wanted to work with an African American model to show and celebrate black male beauty.

What inspired your editorial? What story does it tell?

Primarily, I wanted to tell a story about returning to our roots, to nature, to our most simple and unencumbered form. The story I was telling was that of a boy returning to himself and getting back in touch with himself, and his own unique rhythms, the rhythms of nature, of the sea, of the wind, of the earth beneath his feet.

Comment on the idea you had in mind, explain the moodboard, how did you work on it, and how it turned out?

I wanted to break away from the usual urban backdrop of NYC, and shoot in a natural setting. I wanted nature to be the other character in the editorial, next to my model, Waverly, of course.

Being from and residing in New York City, we don’t have a whole lot in the way of natural settings to connect to. The closest we come is Central Park (which is, in fact, a man made park), along with the Hudson River waterfront, which NYC is doing its best to develop and make into a green space. So I did the closest location I could think of that felt to me like a natural setting, the beaches in Coney Island. I am someone who feels very much contented by being near the water, and the natural rhythms of the waves and tides. So this seemed to be the perfect location for the shoot.

My mood board contained many images of the ocean, of young men playing at the beach, of poetic and minimalist images of people reflecting at the shores of the sea.

What equipment did you use for the shoot?

I used my Canon R5, as well as my favorite lens of the moment, my RF 28-70mm. I also used my Canon EF 35mm 1.4 with an adaptor which is another wonderful lens that is not standardly used for portraiture, more of an environmental or journalistic lens, but I quite enjoy it.

Where did you shoot this editorial?

As mentioned, the shoot took place in Coney Island, New York City, which would be our closest and most accessible beach front as a New Yorker.

How does this editorial reflect your style?

This editorial definitely expresses my style as an artist and photographer because there is a distinct poetic and cinematic quality to it, which is what I tend to gravitate towards in all of my work. I grew up in the entertainment industry, my father was a Broadway actor, I grew up in a community of both working and celebrated artists called Manhattan Plaza. I later worked in the film industry for many years as both an actress and an art director before finally stumbling upon my deep love of photography. Therefore my work has a very narrative and cinematic quality to it. It tells a story.

What vibes did you want to transmit through these images?

I wanted my viewer to feel that they were looking at a thoughtful portrait series of a young man reconnecting with himself and with nature.

How did the model feel while shooting?

My model, Waverly Fredericks, is a professional dancer who is currently enrolled at the esteemed Juilliard School in New York City. He has been trained to be very physically expressive as a dancer, and so this really translated to the demands of our shoot. We became co-collaborators in the physical expression of my vision. Waverly was a joy to work with because he was open to my direction and suggestion but also found he brought his own ideas from his dance background to the table. I simply loved working with another artist in this way.