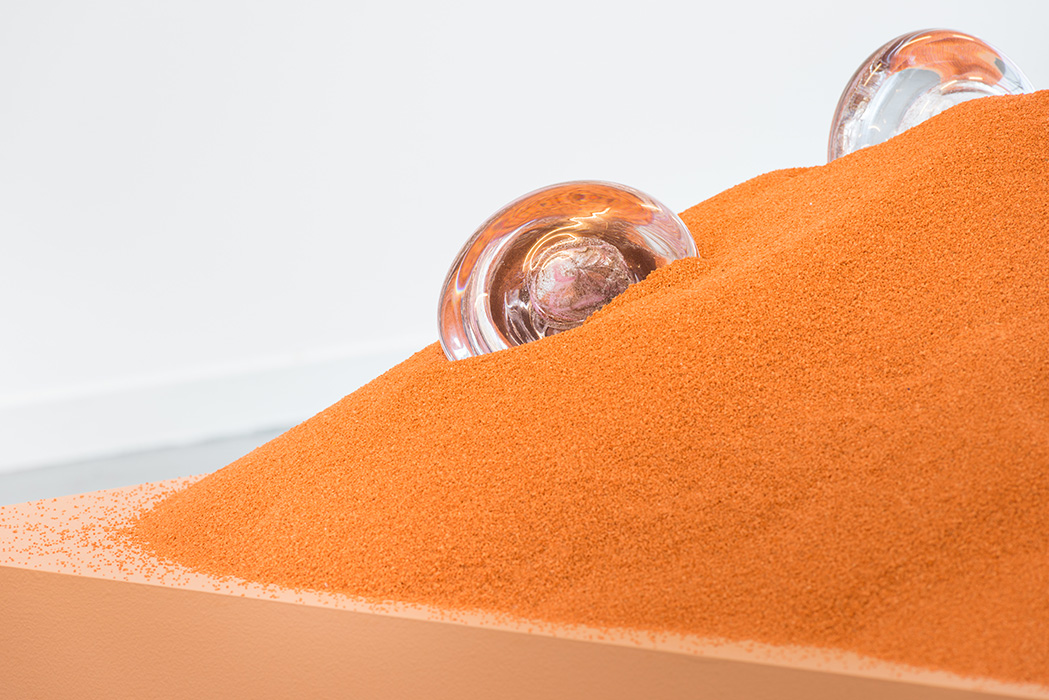 We are steered in a big dark room. A wooden framework of a small forest cabin stands in a gloomy cold grey light, a thick iron chain lays on the floor.

There’s a hole in the concrete ground that eructs a green smoke. Holy fuck, did I come all the way to Moss, Norway to be butchered as a part of some post-Norse pagan arty performance?

Momentum 9 : Alienation is an ambitious project lead by a team of young but strong curators. This edition proposes an expedition on the shores of the unknown : bodies, objects and technologies ; ecology ; and structures and societies.

It’s hard not to think about Yuval Noah Harari’s best seller Homo Deus when navigating between the artworks. Questions like « the future place of humankind on the map of Earth species, the possibilities of different mental states, our connection with technologies or what is it that makes us human all addressed Experiencing the Biennal as a selection of works gave me an exhilarating feeling for the future, even if the concept gets a little muddled in the vastness of the fields of research. As demonstrated since many years by IKEA, a clear beautiful plan can become a bloody mess in real life when one has to put the things together. Momentum 9 : Alienation directs our attention to a diverse, confused, and sometimes beautiful present and future reality, escaping from the cliché of Nordicness as a perfect state of eternal purity of line.

Sonja Bäumen, Fifty Per Cent Human, 2017, installation at the Momentum Kunsthall in Moss

The Alien here is me, and you, including the 50% of our bodies that indeed constitute us. In the work of the bio artist Sonja Bäumel, the viewer can enter the world of the bacteria nations and interact with them. The installation invites you to touch the colonies while lying on the floor. One of Bäumel’s inspiration is the American evolutionary theorist and biologist Lynn Margulis who describes humans as “a semi-continuous spectrum of interactive bacterial nations”. Bäumel invites us to get in touch with ourselves quite literally.

The concept of Alienation unfolds around the nature of Nature and our relationship with it. The works often push us to adapt to the art, as one has to adapt to Nature. So goes the performance of the Norwegian collective Trollkrem. They performed for us a beautiful party on the beach. Dressed as trashy mermaids in old plastic debris and giant shiny sequins sewn on 90’s jeans they embodied the sort of post-apocalyptic dream of a group of beautiful young people surviving on booze and seaweed after the end of the world. Add to the mix a biologist educating the crowd on the various penises of the marine kingdom and I’m sure you want to book your ticket to Moss right away. I was surely happy to be there.

A member of Trollkrem on the Alby Beach last Friday.

The last work I’ll talk to you about is a whimsical installation from the Finnish artist Jussi Kuvi. It is not for the faint-hearted as you must go in a fully black room and wait there until your eyes adjust. But the reward made the anxiety disappear. This piece to me symbolizes the relationship we have with the alien, unknown and queer things of the world. On a theoretical level, the work recreates an experience in the Nature in a totally man-driven environment making you wonder about the different layers of interpretations that involves. On an aesthetical level, it challenges the perception tool (yes, that’s the eyes), forcing it to adapt to be a part of the experience. As time passes I saw nothing, then a blurry 2D image. The darkness makes you lose the sense of space, and I could have stayed there the whole day.

Momentum 9 : Alienation Biennal has much more to offer, including an impressive installation by the American artist Abigail deVille, some surprising designs from H.R. Giger (the man behind the design work of the movie Alien), or hybrid Man-Car from Patricia Piccinini. The town of Moss is worth discovering also, and you can swim in the beautiful Fjord.