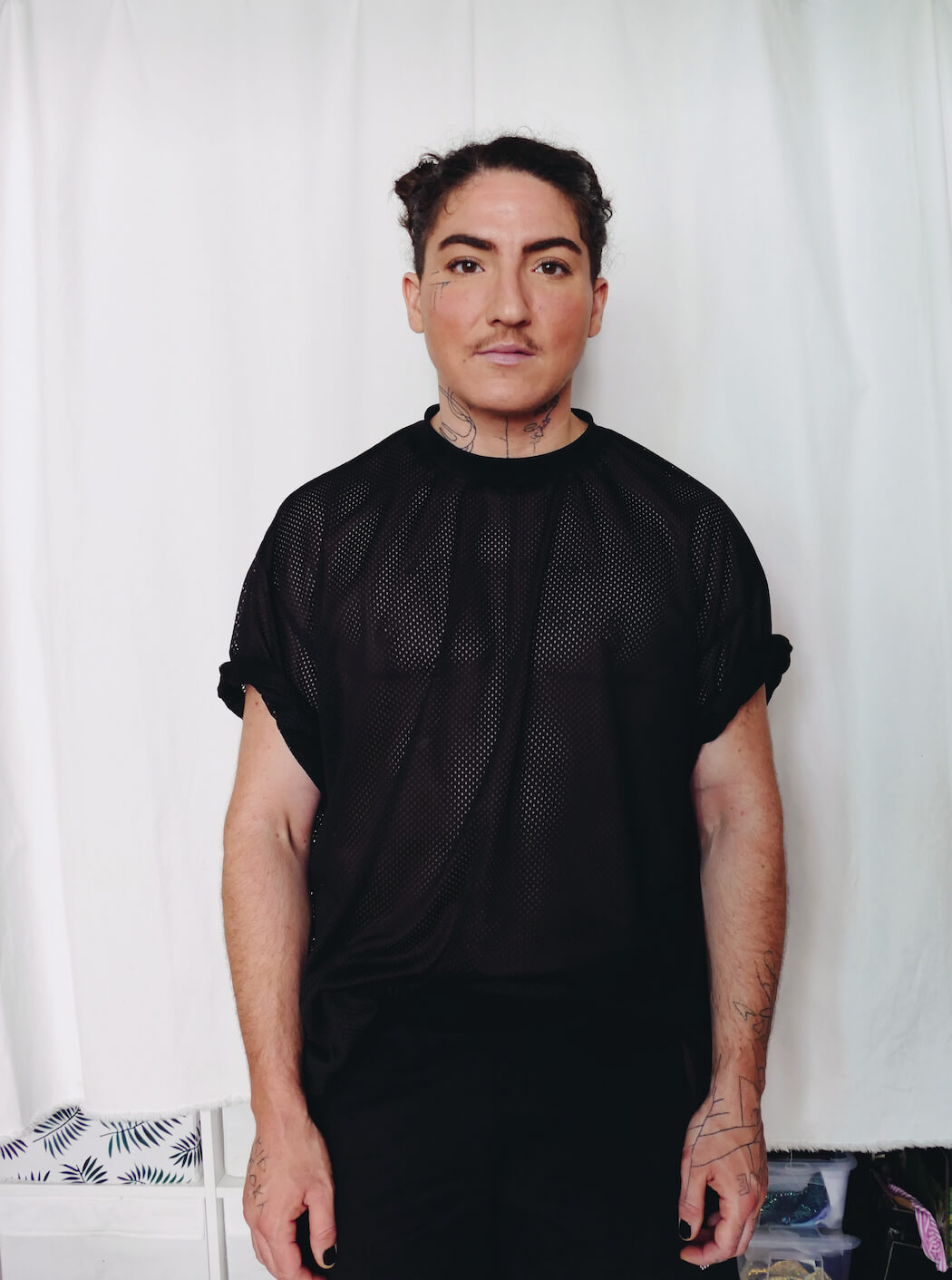 One To Watch: Adrian Weiss

An interview taken from our #Pride Issue. Introducing Berlin-based designer Adrian Weiss. “I want people of any gender, age, body size to feel comfortable in what they’re wearing and to support them in expressing their identities with clothes.” Interview and Portraits by Marcel Schlutt @marcel_schlutt 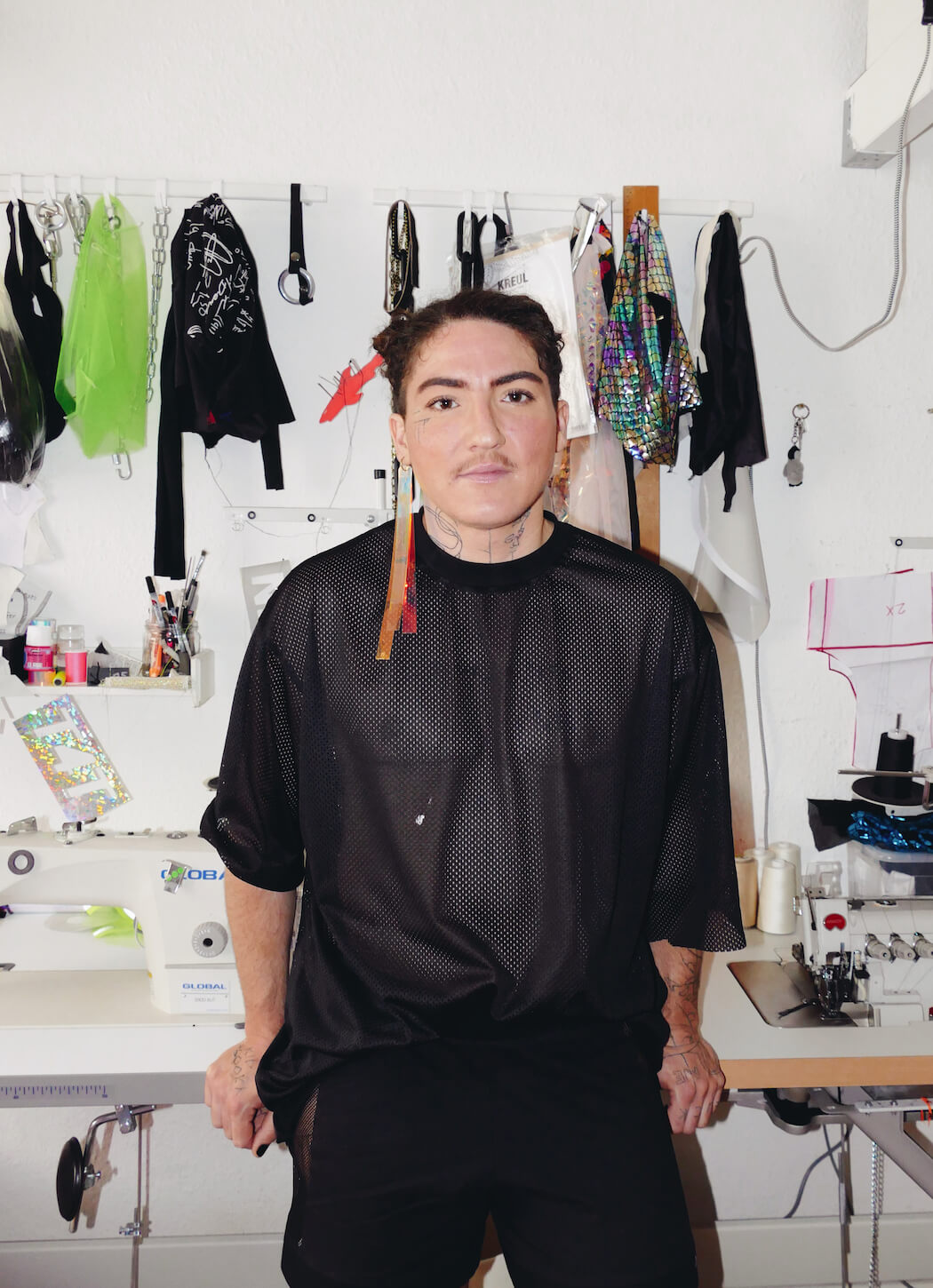 Tell me a little bit about how ADRIAN WEISS came to be and how it all started?

Back in 2016/17, I was unemployed, recovering from years of depression and being sick and I was sewing and creating stuff every day and night, but mostly for myself and for fun. At that time, the Jobcenter asked me what I wanted to do. So I wrote a business plan and became self-employed (sounds easy, it wasn’t) and got some more support from the Jobcentre since we whole-heartedly and mutually wanted to be out of each other’s lives.

I’d been thinking about transitioning since 2013, so it all happened at the same phase of my life when I decided to establish the label and get into more detail about medical transition. Therefore I didn’t want to use my birth name because I knew I wouldn’t be keeping it. Finding a name for both myself and my label was really hard at that time. So I combined the names of two of my family members – Adrian, which is one of my brothers’ second name and Weiss, my grandmother’s birth name. I work very intuitively and as I started selling items regularly, I got a lot of good feedback from people – that really encouraged me to move on and focus on all-gender clubwear, bold prints, one-off items and upcycling material. All items are handmade by me.

Please tell us a little about yourself and the journey that led you to this point.

Hellooooo I’m Emrah, I’m turning 35 on July 21st (Cancer sun, Leo rising), I was born and raised in Germany, I’m transmasculine gender non-conforming /queer (labelling myself is so hard) and my pronouns are he/him.

I was studying product design in Offenbach, Germany, when in 2010 I participated in a collaboration project at my university – that’s how I accidentally started sewing. During that time my mother, who I loved a lot, was dying of cancer. It was so hard and I went through very painful years of deep grief. Sewing literally kept me alive and let me move on and gave me hope and solace and joy when I couldn’t find it anywhere else. I’m a very impatient and impulsive person, but the moment I start to work, it makes me calm and patient and lets me find some inner peace. I have found so much meaning in this kind of creative work. 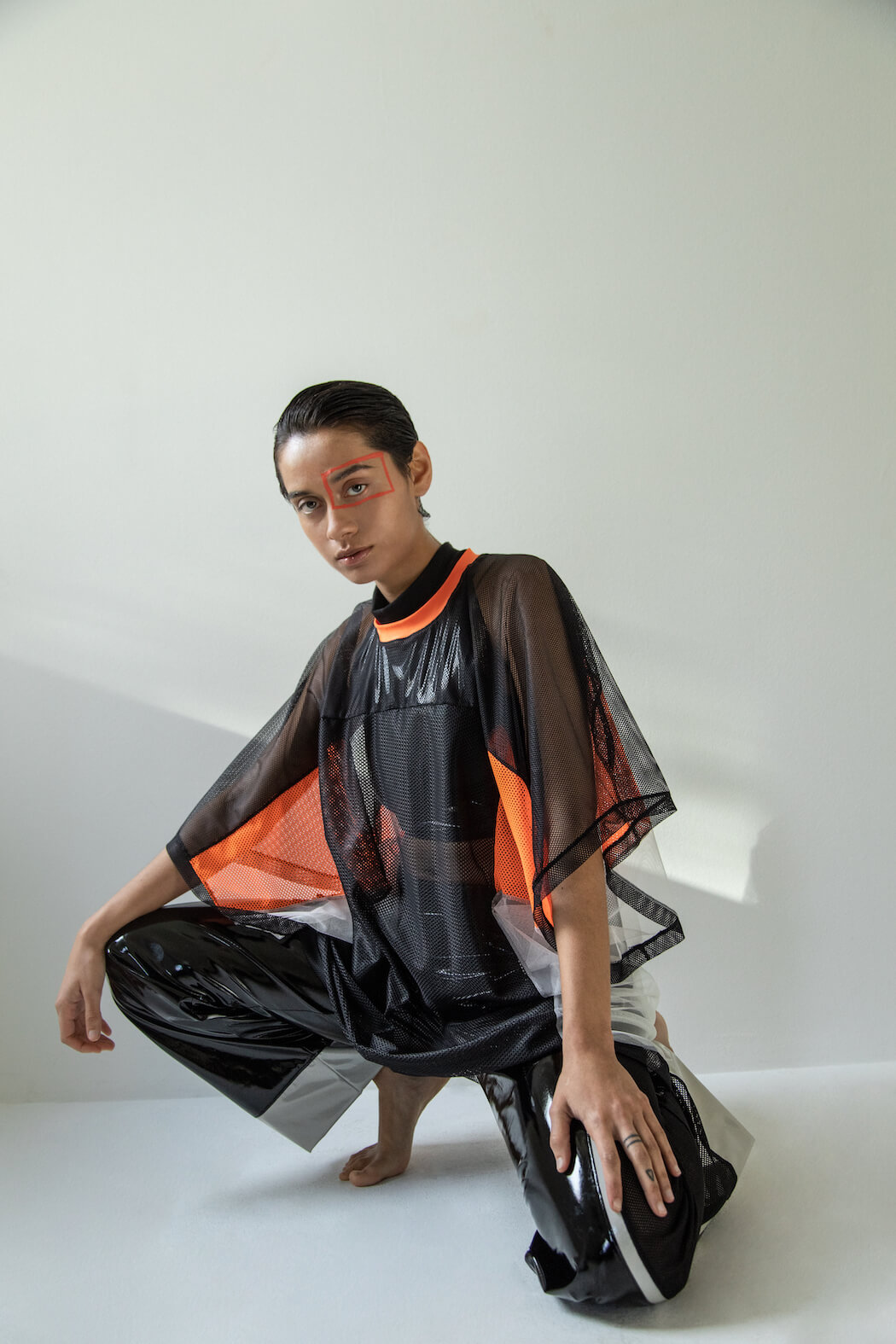 How did you get to where you are today?

Hard and consistent work, passion, patience, trust in myself and the will to learn because I’m mostly self- taught and didn’t really have anyone to ask. I invest most of my time, money and energy in my label. When I first started, I was basically always broke, so I upcycled old clothes, bedsheets, curtains because I couldn’t afford to buy new fabric. Being creative is very much about to find ways to make things work and to find ways and solutions to realize dreams or visions, not just about handcrafted skills.

There were also people who loved me and trusted in my skills and appreciated and supported me and my work when I was hopeless. Transition is playing a big role, too! I would definitely not have made it without transition. 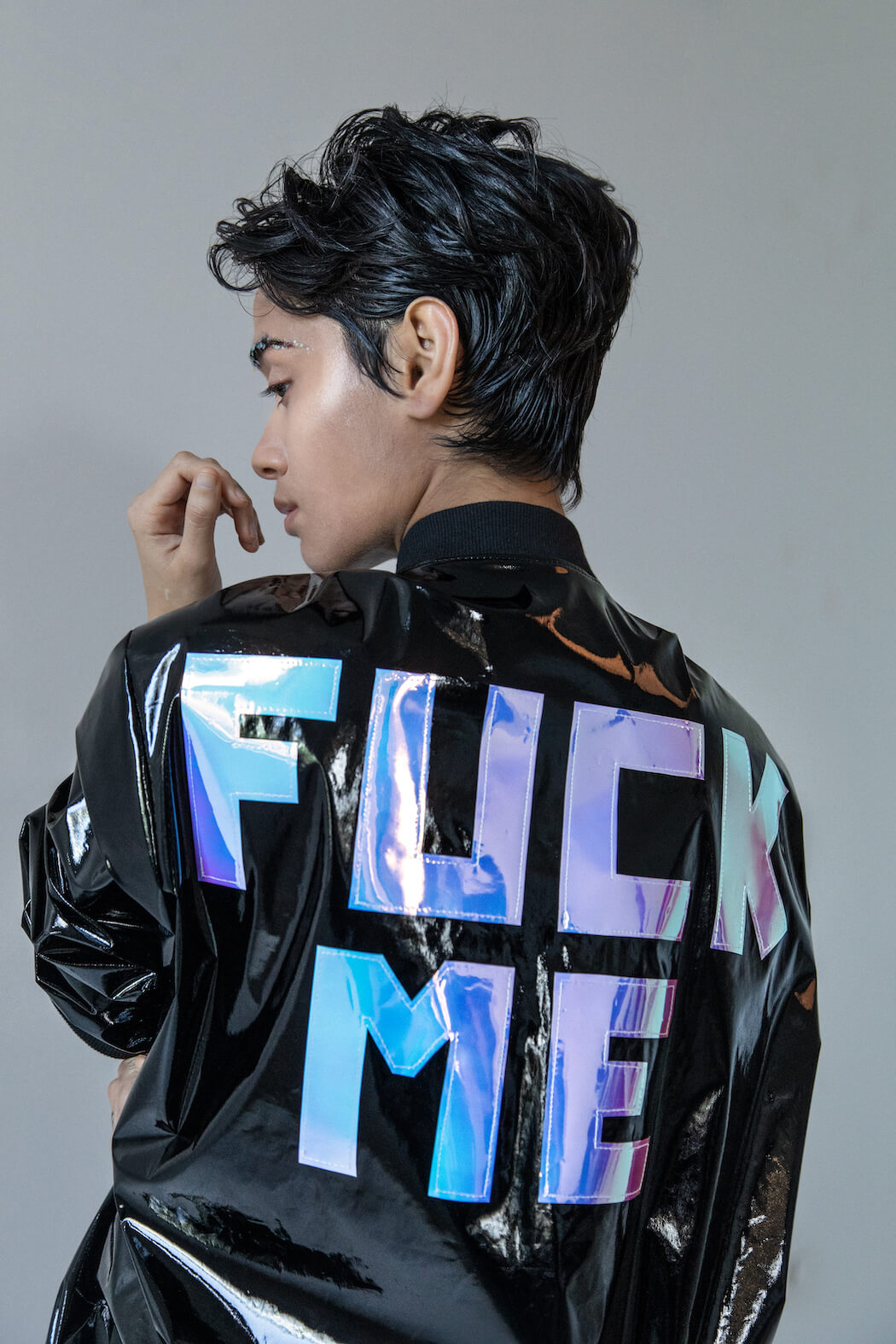 What’s your inspiration behind your work?

There’s so much! I buy mostly offline so I get very inspired by seeing and touching material or finding some unexpected colour – or fabric combo. Being able to upcycle material is very inspiring since I never know how an item is going to turn out until it’s finished.

Before COVID-19, I used to love going out. Berlin’s (queer) club scene is a whole inspiration itself. Watching people dance, move, see what they wear, how they like to represent themselves is so much fun and great inspiration.

The most important inspiration comes from being queer, gay and trans* and having a different perspective on bodies, different body issues than cis people and dysphoria about certain body parts cis people most likely don’t have. In commercial shops, lots of cute, fun and sexy items are available in small (“girls”) sizes only which is very frustrating for people of bigger sizes or bigger bodies, because it’s not easy to find comfortable, affordable and gender-affirming clothes. I want people of any gender, age, body size to feel comfortable in what they’re wearing and to support them in expressing their identities with clothes. 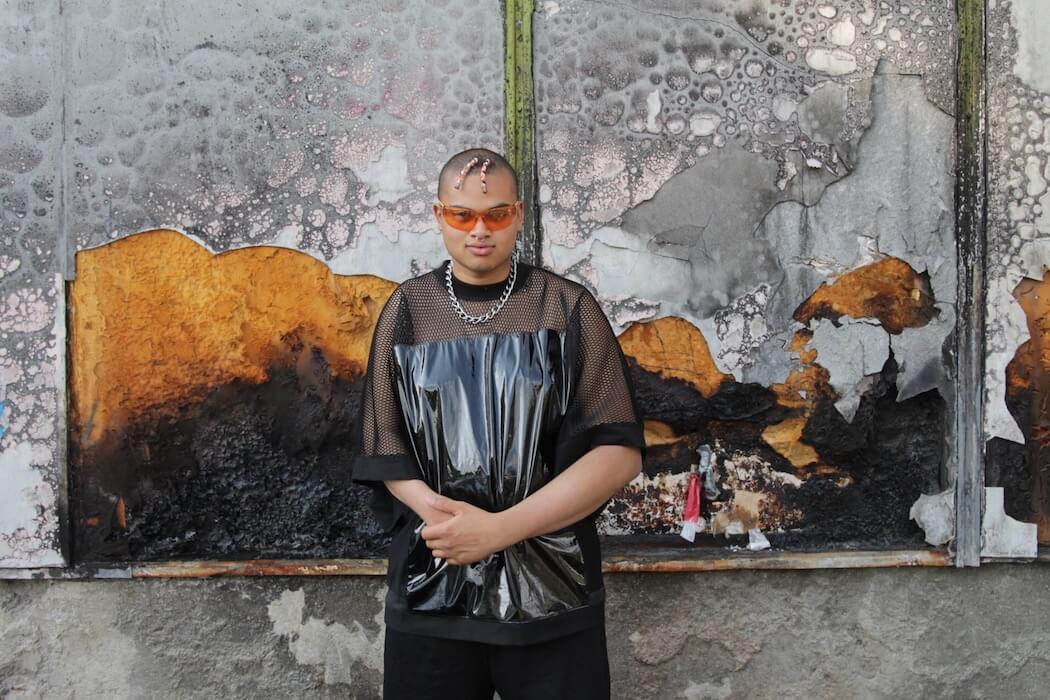 What would you say this is the biggest influence on your design process?

Planning in advance is not really my thing and often items turn out differently than I expected; I like the randomness about it. When it comes to creativity and just doing it, I trust myself deeply and I’m not afraid to make mistakes. I don’t do seasonal collections and I never draw styles/designs in advance. My head is full of ideas and I literally never run out of inspiration. People’s feedback is very important for me and I really need it to know what items, styles and sizes to focus on.

Also, (trans*) body issues have a huge influence on my work. I’m a transmasculine person and my boobs, which caused me to suffer a lot, let me become very creative when I wanted to find a way of dealing with them better via clothes.

Who would you most like to see wearing your clothes?

I used to be really excited and happy to coincidentally see people in a club wearing clothes I made (when they didn’t even know it was me who made them). Now, I’d love to see more transfeminine people and fat people/ people with bigger bodies wearing my clothes. 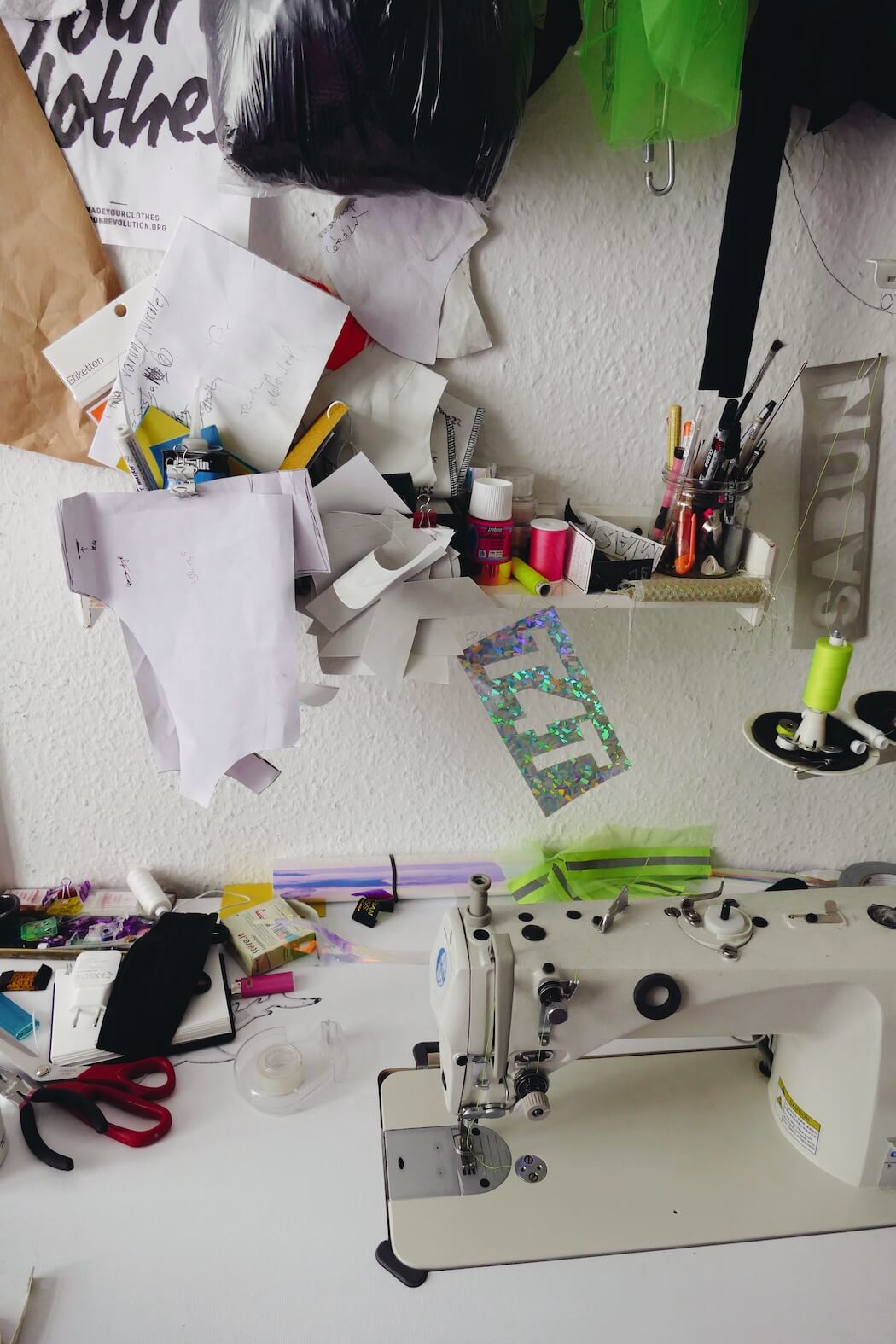 What’s the best piece of advice you were ever given?

“If someone’s offering you money, just take it.”

My former roommate and friend gave me this piece of advice a few years ago when I was insecure and self-conscious about my work as a creative person and didn’t know the worth/value of it. It’s not about being greedy or getting rich, but about being humble and grateful and still knowing the worth of my time, my skills and the energy I put into my work. I used to be very bad at understanding this concept, many femme/ AFAB people are socialised this way but that’s a whole different topic though.

Why did you become a designer?

I want to do this for the rest of my life because it combines my skills and interests and things I’m good at. Creativity is unlimited and so designs, and since there’s more and more queer, trans*
and non-binary people asking for the clothes I’m making I feel so grateful and confirmed and I do really see a point and sense of going on with my work.

Do you have a guilty pleasure?

Nooo, of course, I don’t! But I might have a really ‘unpopular’ taste of music. I especially like trance, acid hard trance, and do you know the 90s German band Scooter? Still waiting for someone to take me to a concert.

What superpower would you love to have for 24 hours?

I’d love to learn and speak any language in just 5 minutes and also I’d love the power to replace the orange menace by a queer Black trans woman.

How important is Pride for the trans* community?

It was black and brown trans* women fighting for our rights at Stonewall Riot which is now known as Pride – there would be no Pride without trans* people.

The umbrella term of LGBTQIA+ is very controversial and there’s a lot of discrimination and transphobia amongst the so-called community. We trans*/non-binary people constantly have to validate ourselves to be seen, but not to be seen too much, we try to pass but still be visible, we want to express ourselves but be safe on the streets or public transport, we have to fight about pronouns and names with families and even queer friends. We’re scared to be outed or harmed, or even killed.

We try to prove we’re trans* enough to be part of the community even though some people won’t or can’t do medical/physical transition. Non-binary people experience discrimination/misgendering/transphobia from other trans people, and there are only a few spaces to be seen and to actually feel and be safe. We have to come out to families, friends, doctors, bosses, strangers, it’s a long, humiliating and for many of us a never-ending journey. In some countries, we’re getting erased from the system, we ́re held apart from medical care, we have to discuss and fight and die just to have the right to live.

And we cannot even fully rely on the support of people within the LGBTQIA+ community since there are lots of highly under-educated and transphobic cis people who just don’t care. Pride and the support from cis people is very important, and not only when its Pride, but always. 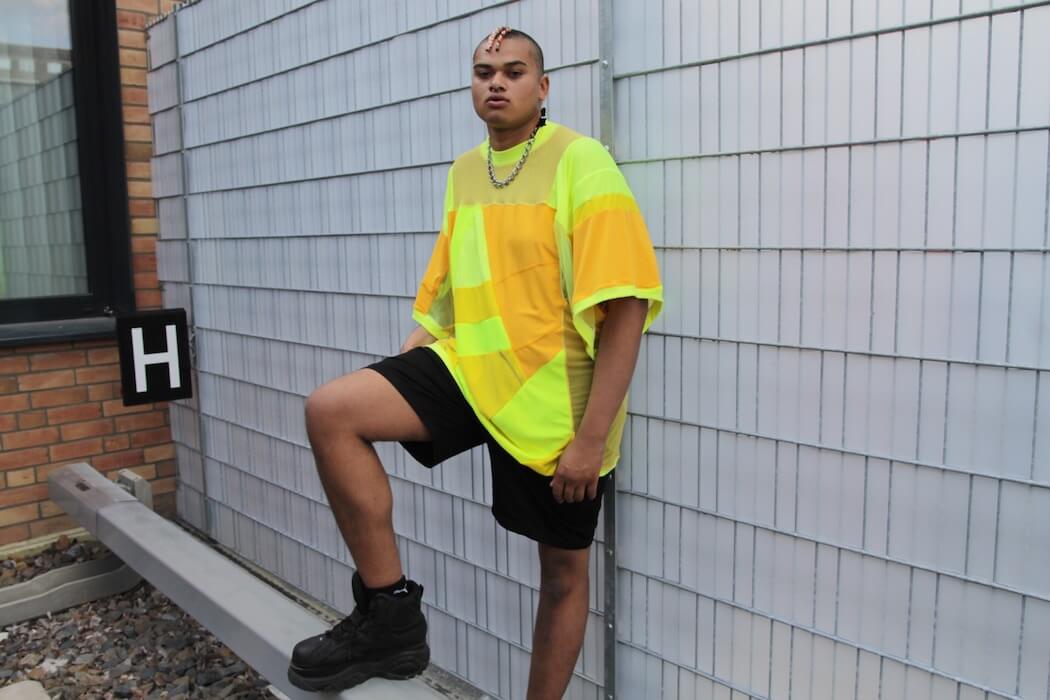 Do you think the fashion world is open enough for trans designers?

I wish. It’s not just about the designers but the whole system of how the fashion world works. I wish that the fashion world was open, but transphobia, sexism, ableism, racism and patriarchy is everywhere and there are trans people (mostly (Black/PoC) trans* women) getting murdered simply for the fact that they’re trans.

So how can the fashion world be open if the world is full of hate and disgust for us? In commercial fashion, the cis, white, skinny, able-bodied, young model is the default. Trans*models are ok if they
look cis. I don’t even know where to start because people’s perception of what beauty is, even on what diversity is and looks like is shocking.

It’s a huge industry based on heteronormative, eurocentric beauty standards, based on the exploitation of people and resources worldwide.

It’s not only about trans designers. It’s about the people in high positions, decision-makers, managers, stylists, photographers, hair- and make-up artists, editors, model agents, models, retailers, and so on. Trans people are people and we are fucking everywhere but many of us don’t even get the chance to get into these positions because the system or society doesn’t let us access these spaces in a meaningful way.

As a male passing, German (& German citizenship), a white, young, able-bodied person with access to health care, healthy food and a great social network of supportive friends and (chosen) family I am super privileged and one of the only trans* designers I know. (Maybe the others are too shy and didn’t come out to me?) So how can the fashion world be accessible for someone with less privilege?