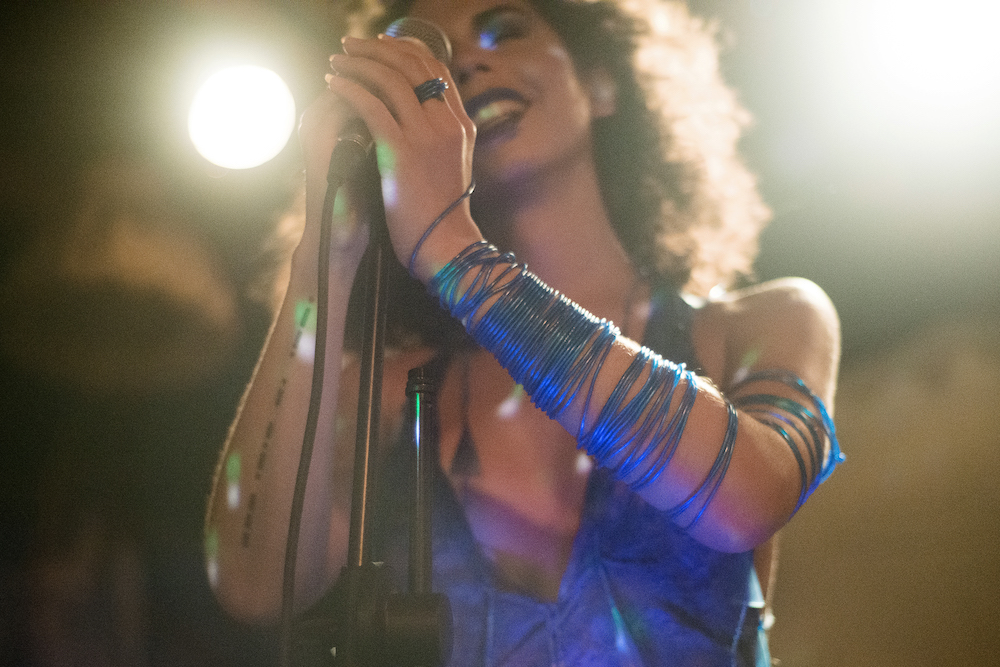 Sanni Est ‘War In Her’ live

Sanni Est is blowing up in Berlin. One lasting memory of her recent concert at Klunkerkranich was of the artist gathering people after the show to help move all the gear from the stage to her apartment, located around the corner from Neukölln Arcarden. I picked up one of the beautifully crafted Alfaia drums and followed Sanni’s housemate into the carpark below the popular rooftop bar. As we were about to step into the elevator and join a couple readying to leave, we spotted the rest of Sanni’s entourage— about twenty people, and not all Brasileirxs—each carrying a single piece of equipment. More drums, an obscure instrument in a carrier bag, a microphone stand, a drumstool… Sanni’s housemate wedged a wheelie suitcase in the elevator and the couple inside waited patiently for the parade; talking, singing and gesticulating as they unhurriedly descended the ramp and filed into our elevator and another that had just arrived. Regrouping on the street we turned the corner and formed into single file, shuffling along the sidewalk towards Sanni’s building. Up two flights of stairs we formed a human chain, passing all the pieces of equipment one by one from the street door, through the apartment and into Sanni’s bedroom. It was ‘like rebuilding a forest occupation’ I later wrote in my notebook. Our task complete, we promptly walked back around the corner into the shopping centre and up to the entrance of Klunkerkranich, where we were asked to wait outside until we finished the drinks we were still clutching. That’s a support base.

Having encountered Sanni as a DJ and performance artist I was curious to see her perform her music live. She promised that this concert at Klunkerkranich would be special as she was bringing together a number of her collaborators who had yet to perform together. Alongside producer Strip Down on synths and drummer Freescendo Radix she had invited a Yoruba percussion trio, Tâmera Vinhas, Neide Alves and Neto Salles, who offset the electronic music arrangements with live Maracatu, Côco, Ciranda, Afoxé, Macumba and Ymalê rhythms.

A recording of Afro-Brazilian ritual songs preceded the band taking to the stage, but despite such auspicious beginnings, it was a performance plagued with technical difficulties. Most people come to Klunkerkranich to sit in the rooftop garden at sunset and gaze across its unique South-of-the-river view. Yet, on this hot late August night Sanni’s band was squeezed onto a small stage indoors between the bar and the queue for the kitchen. Trouble with feedback and monitoring further compromised her sound, while the stage arrangement meant most of the band played in the dark. Even Sanni’s dress, blue and draped in rattling beads, seemed to give her trouble. A ‘Cyber Yemanjá creation’ made by the visual artists Tina Escarlatina and Camila Roriz, it evokes a Yoruba feminine water deity, often depicted as a mermaid—an iconic figure for transgender people. Jean Battirolla did Sanni’s make-up, emphasising the attention to detail that is a testament to Sanni’s professionalism and ambitions. So while it was disappointing not to see her show reach its full potential, I was impressed how Sanni’s confidence and stage presence never waned. Her band seemed to be enjoying the night and this sense of fun in spite of setbacks was infectious.

Sanni performed songs from her recent debut album War In Her (2018). Inspired by a broken romance, her lyrics address themes of sexism, racism, transmisogyny and cisnormativity. Along with vocals and effects, Sanni also played the flute during ‘Lullaby’, and when she wasn’t singing she danced! There was little doubt about her local appeal, with an attentive audience singing along to songs such as ‘Afraid’ and ‘Slutty Girl’, including visiting São Paulo DJ Bad Sista. Towards the end of the set, the Yoruba percussionists surrounded Sanni for a thundering rendition of her 2017 single ‘Brain Damage’, upping the energy levels another notch. The concert finalé, an extended version of ‘Cobra’, animated the elated crowd under spinning disco balls.

Words by Sumugan Sivanesan
All photos by Renata Chueire