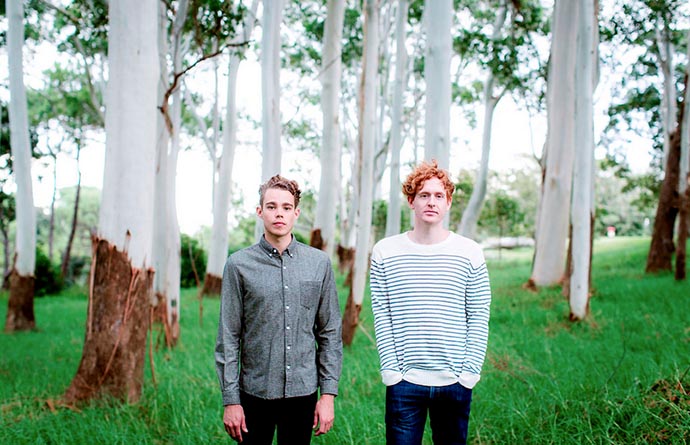 Sound of the Week: Panama

Panama describe themselves as “hopeful house enthusiasts and purveyors of nostalgic electronic sounds”- just the type of vibe that fitted perfectly with this summer! Fronted by Perth-born songwriter and classically-trained pianist, Jarrah McCleary, and backed by drummer, Tim Commandeur, Panama’s sophomore EP, ‘Always’, was recorded in San Francisco with and co-produced by Eric Broucek (!!!, Classixx, Holy Ghost!, Hercules & Love Affair).  Now, with their recent single ‘Jungle’, Panama have taken a “more textural/sampled approach”, focusing less on the piano. After just supporting Years & Years on tour this summer, KALTBLUT spoke to Jarrah on plans for the rest of the year.

KALTBLUT: Hello! Introduce yourself.
Jarrah: Hi my name is Jarrah and I’m from the band ‘Panama’.

KALTBLUT: Where are you from?
Jarrah: I’m from all over Australia really. I was born and raised in Darwin, which is in the Northern Territory of Australia. Then I spent a few years in Perth, Western Australia and I now reside in Sydney, Australia.

KALTBLUT: What’s it like for music over there?
Jarrah: Sydney has a great scene for dance music. It’s one of the reasons I moved here. Living in Perth and playing in different bands there was an amazing experience as it has such a tight knit musical community but sadly there aren’t enough opportunities there as it is so isolated. Moving to Sydney was a scary but ultimately rewarding experience because it’s where my career has been able to take off. There’s lots of opportunities for musicians of all sorts here, although sadly not enough music venues for all of them to play in.

KALTBLUT: Did you grow up around much music at all?
Jarrah: Not exactly- I grew up in a quiet beachy suburb in Darwin. Although my dad is a pretty prolific record collector so my interest and taste in music as a kid was pretty influenced by his. I learnt classical piano from a young age and then when I hit my teens I started getting into blues music. I was fascinated with improvisation. Coming from a classical background I think I really liked the freedom that improvisation offered rather than reading and interpreting someone else’s music directly from a book.

KALTBLUT: Would you base yourself anywhere else?
Jarrah: I have thought about moving to bigger places such as New York or London. Touring would be so much cheaper and I wouldn’t be so isolated from the rest of the world geographically. However, I’m pretty content living in Australia. I guess so much of my life has involved travelling around Australia and I feel pretty connected here. I think I’d miss the landscape and the amazing beaches if I moved.

KALTBLUT: How did you become involved with Future Classic?
Jarrah: Future Classic reached out to me sort of at the start of my career with Panama. I think Nathan (from Future Classic) heard one of my first tracks and liked it. I was pretty chuffed as Future Classic has put out a lot of good music that I was into. I’ve been with them for just over three years now and released two EPs with them. They are great guys to work with because they are super professional but also really involved with the artistic process.

KALTBLUT: Do you feel like you’re always in competition with other artists on that label?
Jarrah: Not really because I don’t really sound like any of the other artists on the label. I feel like I bring something different to the table. I guess it’s hard not to feel slightly competitive with any other artist but that’s not necessarily a bad thing as it spurs you on. It’s still a great feeling when one of my songs is well received so I always try to celebrate the wins- big or small.

KALTBLUT: Where does the name ‘Panama’ come from?
Jarrah: I was recording the first EP back in ’11 and at the time I didn’t have a band name in mind. Sometimes it’s easier to write a bunch of songs than it is to come up with an appropriate band name. I wrote a song called ‘Magic’ that was inspired by an American band called ‘America’. When I was having a brainstorming session with a manager at the time, I got really stuck on the name ‘Panama’ as it seemed to reflect the style of music that I was creating- nostalgic and I guess tropical sounding.

KALTBLUT: I love your video for ‘Jungle’! What’s the story behind it?
Jarrah: The ‘Jungle’ video clip is a follow up from the previous video ‘Always’. The same directors Vivien Weyrauch and Fabian Röttger were involved again. Although I didn’t have a lot to do with the scripting and direction of the clip, we all agreed that we were keen to see it connect to our previous film clips for ‘It’s Not Over’ and ‘Always’. Out of the three clips I think ‘Jungle’ is my favourite because it kind of puts into perspective the meaning of the other clips.

KALTBLUT: Do you feel ‘Jungle’ is a continuation of the earlier music you produced, or something entirely different?
Jarrah: As it’s been a long time between releases (the last EP being 2013) I think musically it’s evolved quite a bit. Where before I used the piano as a focus, for ‘Jungle’ I opted for a more textural/sampled approach almost hip hop like if you will. It’s also a more down tempo track which is a newer thing for Panama to explore and play with.

KALTBLUT: Have you been touring a lot this year?
Jarrah: So far we’ve been over to Europe and the UK this year. We played Primavera festival, Berlin Festival and our own headline shows in Paris and London. We’ve also just done our first festival in Jakarta and a beach festival in Bali. They were pretty different shows for us as we’ve never toured in Asia before or played that style of festival. After that, we’ll hopefully have a bit of downtime so I can keep writing more music.

KALTBLUT: Where’s been the best place so far?
Jarrah: My favourite city so far is Berlin. It just seems so modern and I’m fascinated with the history behind it. I also really enjoyed Amsterdam! It’s just so green compared to Australia- or at least what I’m used to in Northern and Western Australia, which is mainly desert. Saying that, we had some pretty crazy times driving across the US last year and played in some interesting towns and venues so I guess most of the places we’ve visited have been fun or an interesting experience.

KALTBLUT: Do you still get nerves before a show?
Jarrah: You bet I do! I see it is a good sign because it means I’m still excited to play. It also gives me some relief from feeling jet lagged/tired. I think I pretty much ran on adrenalin last year when we were touring for months through the US and Europe. When I got back to Australia I was so rundown and had tonsillitis for weeks! Usually, before a show, I need at least ten minutes to myself to prepare myself otherwise I’m a bit of a wreck.

KALTBLUT: What’s next for you? Can we expect new music soon?
Jarrah: I’m currently working on a new record… I’m pretty excited about it.

KALTBLUT: What’s something you plan to do before the end of summer?
Jarrah: Set up my new studio (!!!). Finish the record.

Listen to Panama’s ‘Tour Van Essentials’ that they’ve been updating all Summer!