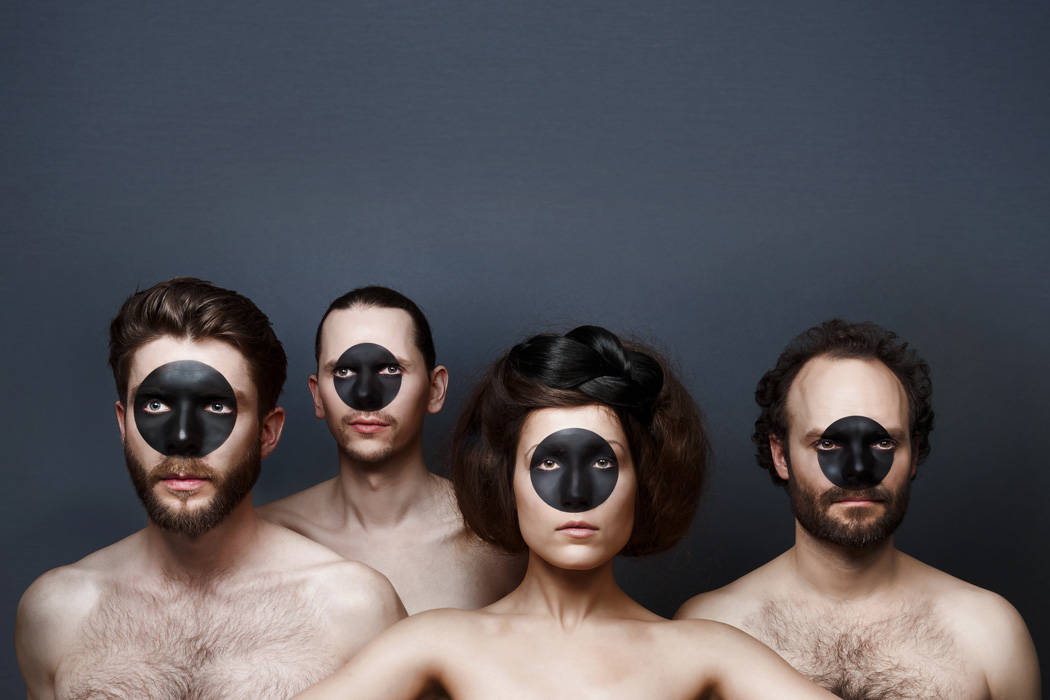 Sound of the Week: Pentatones

Unless you’ve been living under a rock for the past month, you’ve probably already heard the uproar about a certain Delhia de France, front singer of Berlin-based Pentatones, getting her face supposedly tattooed with a huge black circle. In the midst of this daring publicity stunt, KALTBLUT has been waiting to dig into the mysterious depths of  “Ouroboros” – the latest album released on Lebensfreude Records. Completing the eccentric foursome with Julian Hetzel (beats), Hannes Waldschütz (bass/synth), and Albrecht Ziepert (piano), we were lucky enough to meet up with Delhia and Albrecht to delve further into the full meaning behind the tail devouring snake.

KALTBLUT: Let’s start with “Ouroboros” – what was the reason for the album name?

Delhia: Well it came from one song we did, “Into My Venes”, and it developed out of the lyrics of the song, but it also became a concept for our working process. Ouroboros is the snake biting its own tail, so it’s a circle, it’s the most universal principle of transformation, construction, deconstruction or everything.

Albrecht: It’s of love, life, this is all very strongly connected It also describes the whole way that we work.
Delhia: Making an album, going on tour, making an album, going on tour. And even the symbol it’s so old, it’s not only Greek or Egyptian, it’s from everywhere. So working with the circle, our music is based on loops it’s all around us. It became a strong metaphor for our visual work, our artwork and for the whole album concept.
Albrecht: Also with the circle on stage, it’s everywhere. But Ouroboros is just the concept for now. Before there was a completely different concept. 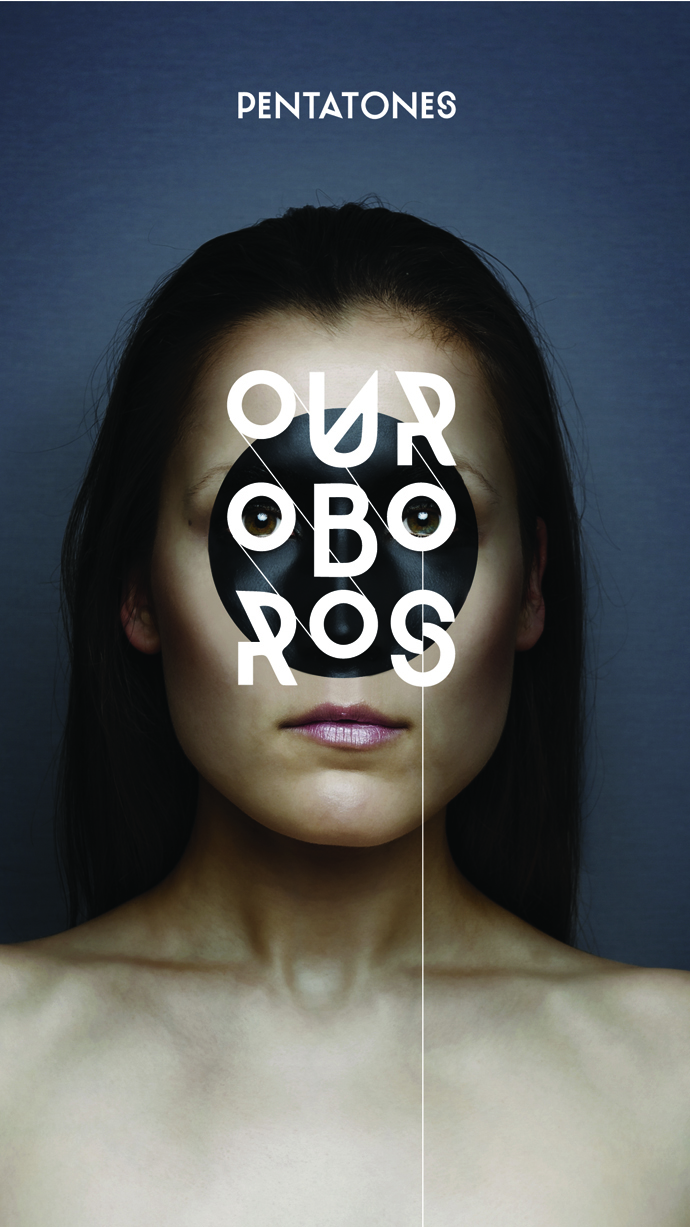 KALTBLUT: Are visuals important to you?

Delhia: Yeah it’s important to us because we are visual artists, and of course that incorporates in our way on stage. It’s part of the music too. So it’s not just the music, it’s the art and everything together that we like.

Albrecht: The PR was saying “Do this” and we just said “No, we want to think about how to do it our own way.” Ouroboros is the name of the album, and it’s a metaphor for transformation. No end.

KALTBLUT: Do you think the visuals affect the way your music is portrayed?

Delhia: I hope, and I do think our music stands for itself, still staging the music and presenting it and building a world around it. It’s nothing separate. It’s a whole thing. Even when we write it’s very visual. It gives an image, it can transport something.

Albrecht: For example if you know a music video and then you see the song played in concert, you can remember the images of the video. It’s very important.

Delhia: You can also transport a different message with visuals, you can shift it. You can give something on top, something that you might not get if you just listened to the music. It makes it more emotional, because you can add another level to it. People can make their own connection to it. And this is what we do. Like getting back to the tattoo video, images can possibly irritate and start a discussion. And also imorph emotion.

KALTBLUT: Was the whole purpose of the video just a kind of “shock tactic”?

Delhia: People have been genuinely convinced about that face tattoo. It’s been really crazy, we’ve been getting phone calls all the time. The media went crazy, so we decided to open up and basically make a statement to say it’s not real. It wasn’t just a shock tactic, because what we did with this album we tried to create it in a different style. We created different realities, alternate realities. And we put a distortion in it. We did this with our two music videos, “The Beast” and “Ghosts”. Our director Konstantina Kotzamani makes short movies, which is something we wanted to involve with these songs. Like we wanted a narration. The tattoo video relates to the aesthetic. But it’s a different director. The Ouroboros connects again, with this kind of irritation in the video.

Albrecht: If you watch “Ghosts” and “The Beast” videos, Konstantina was working with immigrants. So there’s a dark topic that we cover that’s big in the media at the moment. There’s this type of irritation in the videos, the slow motion feeling. It’s strange, the environment, it doesn’t make sense. Being filmed in this olympic stadium that isn’t used anymore. So this tattoo video is also linked with this irritation feeling. We didn’t just want to promote the album, it’s part of the whole artistic concept. 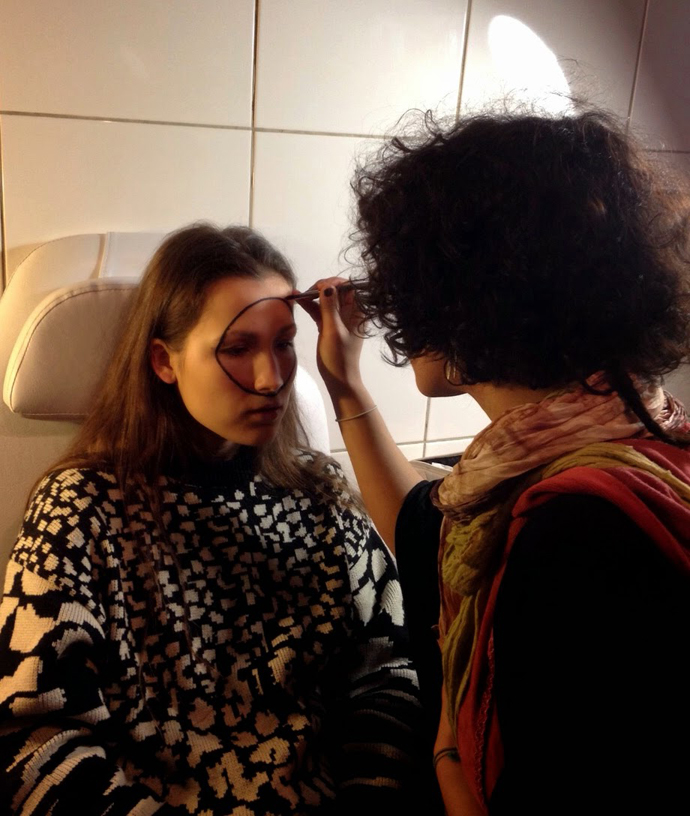 KALTBLUT: In the tattoo video you talk of inuits and spirituality, is this something close to your heart?

Delhia: The tattoo of the circle along the body and the face is to let the soul leave the body. It’s allows the spirits of hunted animals to enter freely. So you can adapt the soul into your body. People do this! Of course Ouroboros is a spiritual concept, it’s mythical and when we saw it we liked the whole principle of transformation. I mean come on, it’s real! It’s like physics! The lyrics in the album are spiritual in a way, but it’s mainly a metaphor describing the principle and you can adapt it to anywhere. You can shift it in any way you want. This is what I try to do in the lyrics, I try to use words that are abstract to build pictures. And since our music is pretty visual, you can pretty much imagine the sceneries it produces.

KALTBLUT: Is this how you construct your music. around the concept first or the lyrics?

Delhia: We come together, we jam. And out of the jam sessions songs start to form. Then we work on them, and then add the lyrics. But also during the process words come up, or even if the guys say something in conversation. I try to accept what comes in the moment, and sometimes I don’t know what happens. It’s so intuitive, you don’t need to have your mind on it just happens. It’s normal. Even The Knife, we don’t know what it’s all about, they just did it! We are not judging it. You don’t have to judge your own art. But it’s also challenging, you can’t just do things. It’s also about the discussion and the tension, the friction.

KALTBLUT: With the continuation theme in mind, do you think “Ouroboros” has done just that in conjunction with your last album?

Delhia: It’s continuing in the way that it’s the same style, but it’s also another concept. Visually it’s different completely. But I mean now the topic is Ouroboros so that is what we focus on. We connect it and take it further. But this time we worked with producer Robert Koch so we opened up a lot more. It’s an intimate process so for us to let someone be a part of that takes a lot of work. But it worked really well with Robert. Some songs we wrote we tried to open up more, we tried to make it more accessible as opposed to abstract.

Albrecht: There’s much more details in this album, we worked a long time on it. And the album before was more like flowing out, so for this one we definitely took more time – three years! We totally changed our songs, radically. I mean if you talk about “The Devil’s Hand” we have a different approach, including our clothes. It was black with threads, and now we have circles.

Delhia:With the music it was a time where we started to find a sound together, but now because we met on certain levels, for compressed sessions, we can build up an energy together, we can write together. And I think we can hear it much better in this album, it’s more coherent.

KALTBLUT: You recorded parts in the Black Forest is that right?

Delhia:Yeah we did it there, the Netherlands, Leipzig, Berlin. So I think you can really hear much better that we are together. There are different approaches of working on music, but the energy you can build up when you spend a long time together. Songs get back to themes. It’s much more intense.

Albrecht: And music is about transporting emotions. And if you want to create emotion together you have to be together to do it. You can’t be told to just create it. It wouldn’t be your emotion.

Delhia: These sessions are really important to us. Some people are just really fast at working on music, and that’s what they do. We just like to spend time and make sure it sounds right. We wanted to take our time. And also involving Robert to help keep the idea of the sound together. Because you can easily get lost of course. So he was really helpful. Some tracks he made really radical arrangements and then others he made really minor changes. There are break ups, but still the sound is complete.

KALTBLUT: Are you touring at the moment?

Delhia: We’re on tour in Germany at the moment, then we are going to do some more performances later on. We are playing with an orchestra, and then a performance with a contemporary dance company on the 16th July. At the moment we are looking to open our sound more by working with more instrumentalists. We like to catch the moment that can never be created again. We like the personal interactment. We do keep a certain kind of distance on stage, between the world we create and how people receive us. It’s good for us right now because when we started we conceived ourselves more of a media art group because we were a mix of artists, doing things like working with an installation on stage, and it was really nice but it was such an effort for every show, all the technical stuff. So we decided to focus on the music for quite some time, so now we’ve done this we feel the need to use more visuals again and slowly build that up on tour.

Ouroboros is out NOW


Check out the Ouroboros app for your iPhone!
“Ouroboros is about realities and perception. We’d like to invite you to become part of it: take a photo of anything with eyes and face and the Ouroboros Camera will drop a nice black circle on it. You are very welcome to listen to the album by stream or instantly grab it through links in the app. In the meanwhile you can share your Ouroboros selfie or browse the app’s feed for more circled inspiration.” 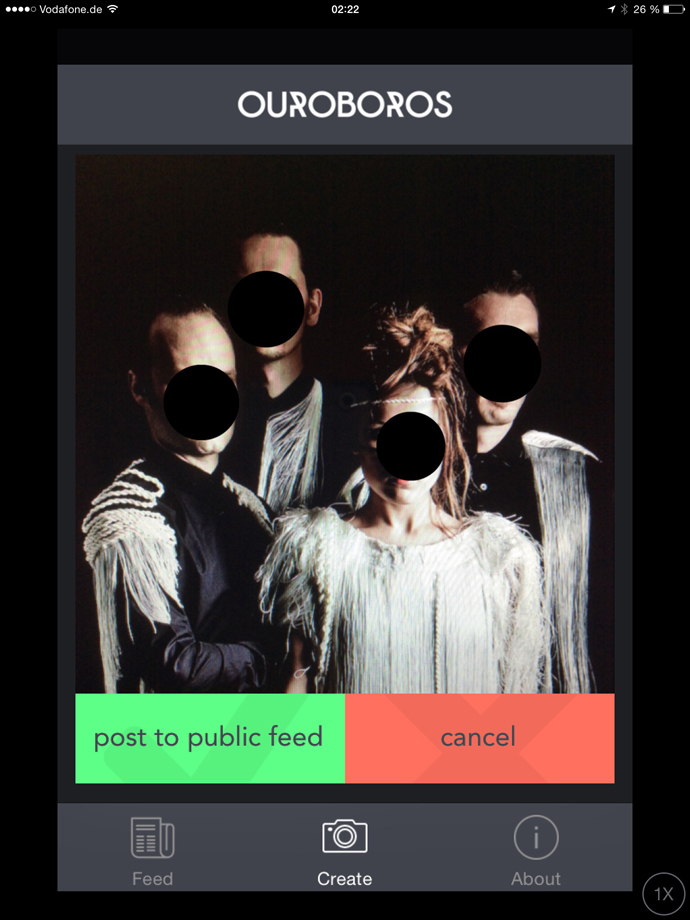 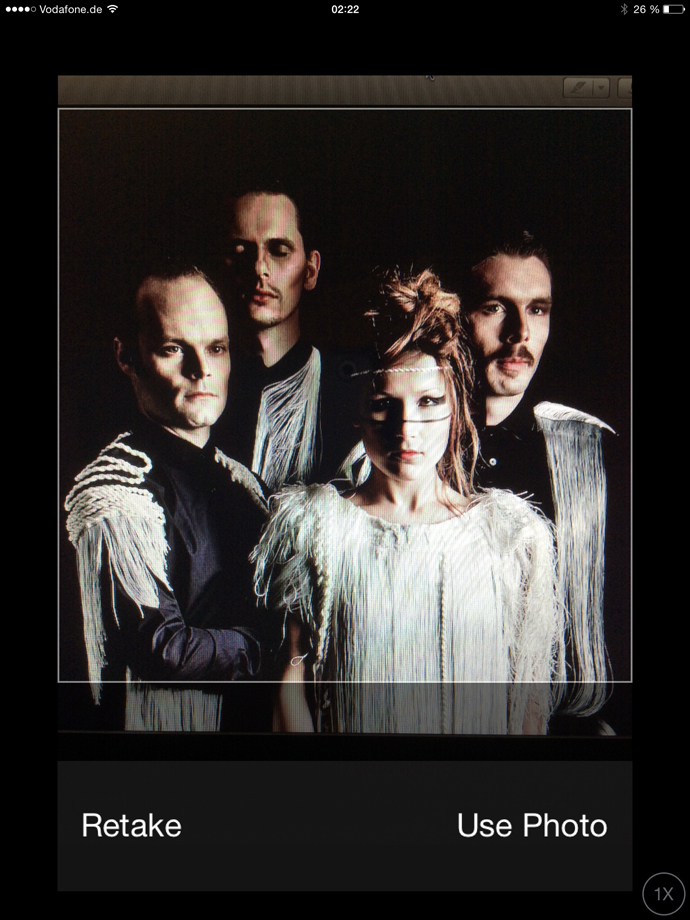 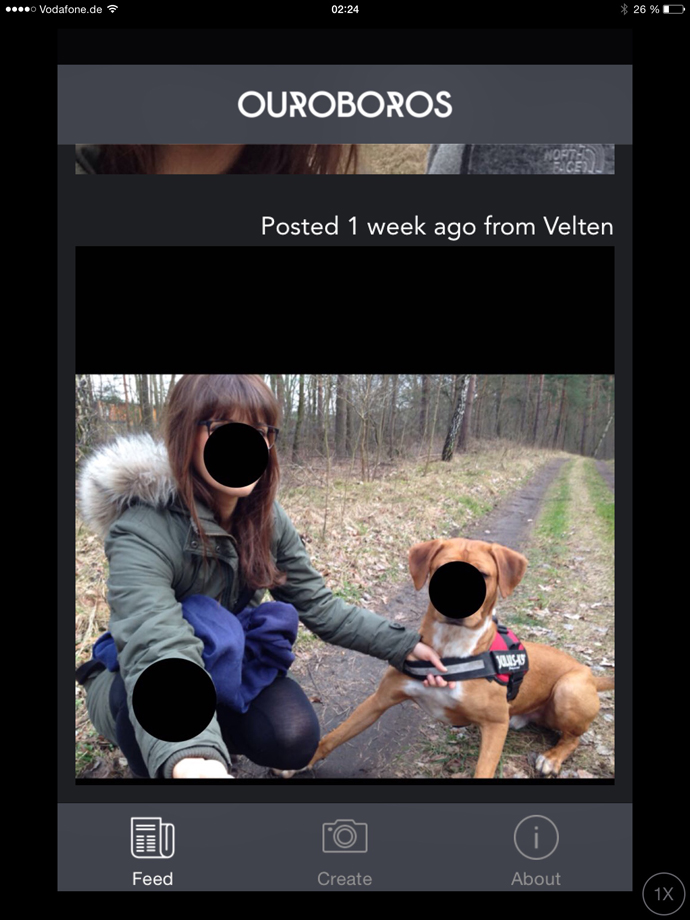