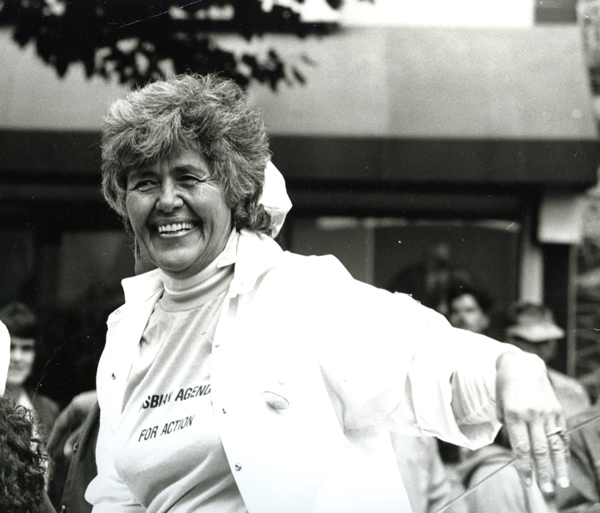 Spanning nine decades from the 1930s to the 2010s, Sally tells the inspiring story of gay rights activist and feminist Sally Gearhart. Brilliant, charismatic, provocative and visionary, Sally worked side-by-side with Harvey Milk, was an icon to the first generation of lesbians to live openly and one of second wave feminism’s most radical voices. She was also the first open lesbian to obtain a tenure-track faculty position at a university in 1973, one of the founders of the first women’s studies program in the country, and a popular science fiction author. During one of the most terrifying, thrilling and revolutionary periods in the history of the struggle for gay rights, Sally was literally center stage. Yet her crucial role in the fight against the anti-gay Briggs Initiative has been virtually erased. Outside lesbian circles, few people know her name. We think it is high time they did. Through contemporary witnesses, archival and found footage, animated sequences from Gearhart’s cult novel The Wanderground, and the octogenarian’s own voice, Sally takes the viewer on a hilarious, complex and surprising journey to discover how a “good southern girl” became an “outrageous” lesbian separatist leader and then ended up living alone in the woods, all but forgotten by history. Through the website documentaries.org/sally, which includes a six-minute teaser for the film Sally, director Deborah Craig is seeking donations to complete the film and hire a comics artist to animate segments for it. She expects it will run 70 to 90 minutes and hopes to release it in 2021.

The team:
Deborah Craig (Director/Producer) is an award-winning documentary director and producer whose films use compelling personal stories to raise awareness about the challenges and strengths of underrepresented communities. Her latest short, A Great Ride, a 33-minute documentary about several lesbians aging with humor and a zest for life, premiered at the Frameline LGBTQ Film Festival in San Francisco in 2018, was picked up for distribution by Frameline and is currently touring film festivals around the globe. It was in 2014 and in the context of A Great Ride that Deborah met and fell in love with Sally Gearhart and her story. Deborah has a B.A. in history from Columbia University, did undergraduate work in photography at California College of the Arts, and has a Master of Public Health from San Francisco State University.

Ondine Rarey (Producer/Editor) is a filmmaker and editor. Her mockumentary A Portrait of Female Desperation was the recipient of six film festival awards. Her documentary Fools and Heroes was a Grimme-Preis nominee (the German equivalent of an Emmy), aired on ARTE in France as well as stateside on PBS. Ondine has edited over a dozen documentary features and shorts, including Now en Español for PBS, My Child: Mothers of War which received the “Director’s Choice Award” at Cinequest Film Festival and “Best Documentary” at LA Femme Film Festival, and most recently A Great Ride. In addition she has edited multiple TV series, including Alien Encounters and Keeping up with the Kardashians. Ondine received a BA from UC Berkeley in History and a BFA in Documentary and Journalism from the Munich University for Television and Film in Germany.

Jörg Fockele (Producer) is an award-winning filmmaker with a career spanning over 25 years. He has written and directed over 10 short films, 4 feature documentaries and numerous music videos and PSAs. Of the awards and distinctions Jörg has received, the most important ones are retrospectives at the Goethe Institutes New York City, San Francisco, Chicago and Mexico City, 2 Emmys and a special prize from the International Film Festival in Berlin. In addition Jörg is a critically acclaimed television producer of award-winning shows such as Bravo’s Queer Eye, ABC ’s Wife Swap, the Sundance Channel’s Big Ideas for a Small Planet and AMC’s Small Town Security. He has also directed and produced shows for MTV, CBS, Oxygen, Discovery Network, PBS, Fine Living Network and the SciFi Channel.

Lauretta Molitor (Sound Recordist) first discovered her love of documentary in high school as an assistant editor and production assistant for her local Public Broadcasting Station, KPBS in San Diego, CA. Three decades later, Lauretta has established herself as one of the Bay Area’s most sought after sound recordists, with experience in all types of production including commercials, industrials, television, and narrative features. Many of her projects have been nominated for and/or won Academy Awards. Lauretta was personally nominated for an Emmy for Best Sound in Documentary for The Celluloid Closet. Recent projects include the documentaries Inequality for All, She’s Beautiful When She’s Angry, We Were Here and Dolores.

Linda Peckham (Consulting Editor) worked for many years as a video editor and series editor for KQED television. She has taught film editing at BAVC (the Bay Area Video Coalition) and now works as an independent documentary film editor, cutting long form verité and character-driven stories. Most recently, she worked on The Corridor, which premiered at the Mill Valley Film Festival and won San Francisco Film Critics Award for Best Bay Area Documentary. Many of her documentaries have social justice themes, have been broadcast nationally (PBS), have appeared in festivals (Mill Valley, SXSW, Creteil, Seattle International Film Festival), and have received Emmy nominations and other awards.