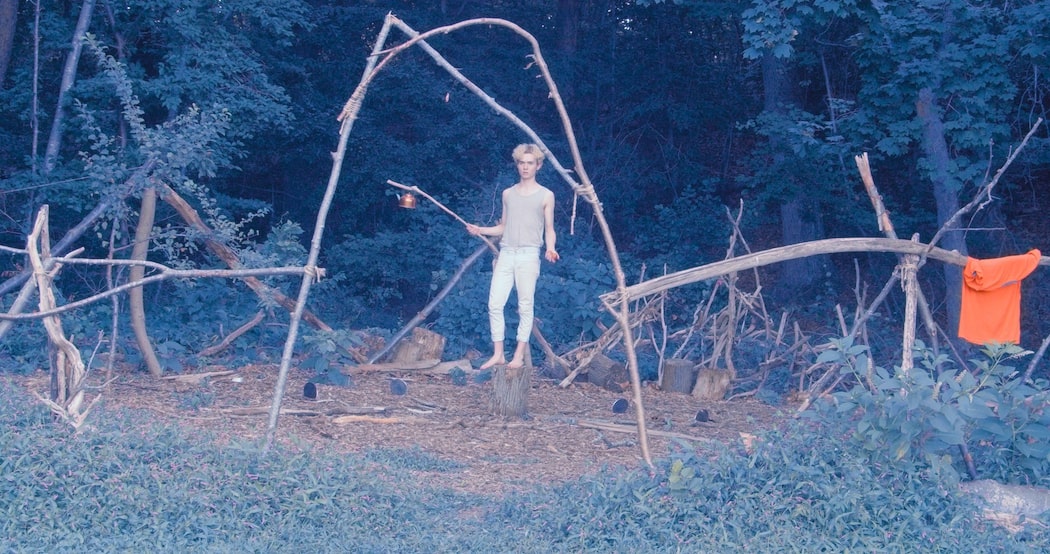 “Citrus” caught me completely off guard. Taken from their debut release, Jesus Save My Broken Little Body—an audiovisual EP, I knew that there were more hidden gems to be found in this collection of work by Providence-based artist Ismy. “My alter ego Ismy (pronounced is-me) is a heightened hyper version of myself, so this track is sort of like their creation myth”, they explain. “I wrote “Citrus” to publicly air out my anxieties surrounding Lyme disease, gender dysphoria, and death. Rather than discussing these melancholy themes in a more fitting piano ballad format, I arranged “Citrus” as an unfitting, exaggeratedly clubbish, danceable song, with the hopes that a more exciting arrangement might be heard and enjoyed by more people.” The 21-year-old, simply known as Matt, moved their piano skills over into music production just 2 years ago. Combining their unusual approach to music-making and video art, I asked if Ismy would like to dig a little deeper into Jesus Save My Broken Little Body.

“I started writing this song on December 27, 2018. I was a sophomore in college, home on winter break, and desperately in love with someone for the first time in my life. We lived far apart, and I remember being so eager to go back to school and be together again. I wanted a getaway for us, a realm we could transport to instantly. I was alone, yearning in my childhood bedroom, scrolling through blogs, when I came across this illustration of a forest during the Carboniferous period. It was this lush, striking vision of blue sweeping over fern and wood like a flood. I was thinking, maybe we’d find each other there.

The woods have this sacred, primordial status to me. It’s where lovers can be together outside of society, outside of social fears and judgment. It’s where I went when I was a gay teen in a town where that sort of thing wasn’t normal. Forest Blue Park is a creation myth—Adam, and Eve, and cruising culture all at once.”

“This one is about Lyme’s disease”

“This is a breakup song inspired by a bunch of shattered glass I found on the sidewalk near North Main and Amos Street. It was also inspired by my girlfriend breaking up with me.”

People Change but I Do Not

“I met her at a party in Barbour, one of the dorms at Brown. She was so tall and pretty. She made me laugh like no one else ever did or ever could. Do you know what Grindr is? It’s not important. It’s like a dating app. I didn’t get her number that night, but I messaged her there, and we started talking. On her original profile, it said something along the lines of, “I look like an alien on ketamine, so if you’re into that, hmu.” I stole this concept from her and wrote this song from the perspective of an immortal being from outer space who visits Earth to find true love.“

“This instrumental is the only track on the EP that is completely improvised. I didn’t write anything down or go back and edit it, just minor mixing tweaks like adjusting the volume. I sat alone in the studio and imagined what dying would feel like. I set up a keyboard synth, a vocal microphone, and pressed record. I usually have a hard time properly meditating, but this trance brought me pretty close.

It isn’t fair but I am going to die one day. When I envisioned death, I saw warm waters flowing around me, carrying me home. I’m not super surprised that water appeared so clearly into my head, everyone knows that meditation and water are wedded forever. I was particularly inspired by the way the composer Pauline Oliveros produced electronic music, improvising long sessions with earlier recordings of herself over a tape machine. I don’t have a tape machine, so I did this in Ableton, recording back on myself, never altering what I played before. I dropped in a field recording of the Providence River because it felt right, and built up sounds from there.”

“This is what plays during a funeral mass for some sort of digital ritual in the year 2031. Transubstantiation is a good metaphor for moving ourselves online. Upload all your memories, consciousness, and Snapchat “For My Eyes Only” pics to the digital realm where you can live forever. As St. Thomas Aquinas put it, this is substance. Your body is accident. I would kindly ask that historians refer to this track as the start of Futuristic Catholicism-core as a subgenre.”

I Was an End

“My school has this one dorm hall that used to be an Elizabethan Revival mansion. It’s supposedly very haunted so naturally, I needed to live there. I walked through the courtyard and all the haunted rooms nearly every night, always on the lookout for a wraith, and not once did I manage to have sex with a ghost. I just moved out of that mansion, but before I did, it dawned on me: instead of thinking of ghosts as a thing from the past, what if we think of them as remembrances from the future? As in, what if ghosts are just our future selves remembering our past? In this frame of mind, we’re the ones who haunt our old haunts, and when someone remembers us, we can feel their spirit a little bit, too.

About the video: Months before I moved out, I explored an uninhabited part of the haunted mansion with my friends. We recorded ourselves exploring empty rooms, jokingly trying to lure out ghosts à la Shane Madej. I even found some old letters in my university’s archives written by former inhabitants of the house and read them aloud in a summoning circle. But no voices called back out to us, no lights flickered back on and off. It was eerie, though, for sure. When I reviewed the footage from that night, all the video was silent. I had accidentally left the microphone off. I still wanted to do something with those videos, I want to remember that night, but what good is footage if you can’t even hear what’s being said? I found an old voicemail that had some of our voices in it, and spliced in footage of that place where my first girlfriend and I met, and blended all three completely separate memories together into one—something happy and haunting, even though it only half-happened. Ghosts don’t have to haunt accurately.”