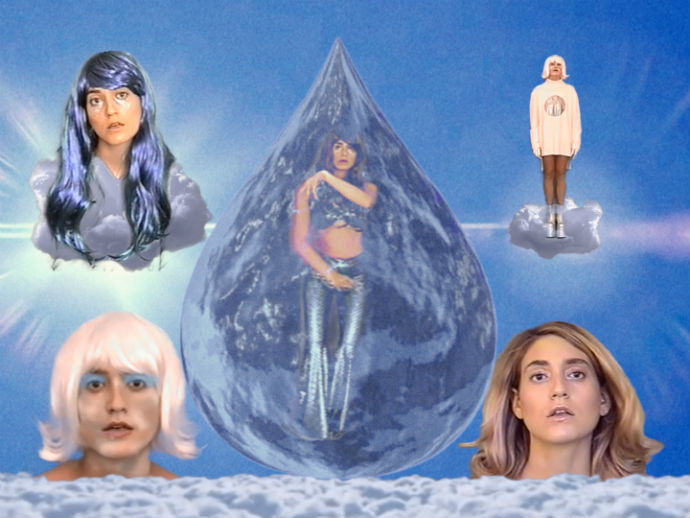 JJ Weihl, one of the founding members of the Berlin psych-pop band Fenster, is releasing her first single and video from her new solo venture, Discovery Zone. Discovery Zone is the space in which the New York-born, Berlin-based artist explores the relationship between pop music, sound collage and performance. Live performances act as a ceremonial laboratory with Weihl behind the vocoder, theremin and electric guitar. Intending to spark an intimate yet inevitably fleeting connection with her audiences, the experience mirrors life itself, in which Weihl describes as a shared hallucination. This otherworldly phenomenon can be seen with her latest release, “Fall Apart”, where she moves between seasons and states of existence.

“Fall Apart” follows the story of a molecule of water navigating the infinite cycle of transformation – traveling from the depths of the ocean to the highest clouds. Shot in her bedroom on green screen with a VHS camera, the video is intended to transcend our collective anxiety about change into the prismatic but fleeting release of a rainbow.

Weihl shares, “Sometimes you have to let yourself completely fall apart and shatter into something unrecognizable in order to find out what you’re made of. There is something essential in you, channeled into every piece of your DNA, a code that is constant and also constantly transforming into something else.”

KALTBLUT: Could you also tell me how this project provides a space that is different for you, though complementary to Fenster?

JJ Weihl: In chaos theory, the butterfly effect explains in a poetic way how non-linear events impact a complex system. Fenster was my first ever band and my first experience recording and releasing music. It’s not only a space for creating music and movies and having fun, it’s also like being a part of this little family where the lines become blurry and you create things together that don’t entirely belong to you anymore – almost like the band itself becomes an independent entity that is not controlled by a single vision. It’s also been an amazing way to travel and see the world through a very specific lens.

Looking back on it now, it’s been a truly weird and unexpected glitch that sort of became my life. Almost like I was walking down the street, on my way to an appointment I had, got distracted and just never made it to that appointment, to that whole other part of my life. So there is no way of knowing if this project would have ever existed – at least as it is now – without taking that turn.

Discovery Zone feels like I found a door to a restaurant in a city I’ve never been but feels completely familiar. It’s a place where I’m sitting down with myself and ordering things that aren’t even on the menu. It feels like I’m meeting myself for the first time, but that somehow I’ve always been there, waiting for me. I think that I’m here now writing you this email because of that weird turn I took in starting Fenster, and now I’m leaping off into another side-plot, a new and unexpected thing. But they exist in response to and in relation to each other.

KALTBLUT: How long has Discovery Zone been around and what was the moment like when it came to be?

Weihl: Discovery Zone is the first organized outlet I’ve ever had for making music on my own. I started working on my first recordings about a year and half ago without a real goal in mind, just playing around and trying to figure out production and jamming and stuff.

My first live shows came about because I’m lucky enough to have people around that are super supportive. My friend and booking agent Amande offered me a couple support shows for the U.S. Girls, a band I’ve followed for years and really admire, so I started working on my live set up because I had this goal, which was super helpful and revelatory. Sometimes you need a deadline to bring things into focus.

I think aside from external forces it came out of a need to understand myself more as a musician and a human and learning through confronting certain limitations – tuning into a frequency that I think had been trying to get my attention for quite sometime but I was not ready to listen.

KALTBLUT: Which unexpected musical and personal aspects of yourself have been found out, directly from creating through Discovery Zone?

Weihl: There is this classic scene in my favorite movie “The Matrix” where Neo goes to see the Oracle and while he’s in the waiting room encounters a child bending a spoon:

I think I’m starting to finally understand what that means haha.

KALTBLUT: You specify three instruments/devices in your bio: the vocoder, theremin and electric guitar. These all aren’t exactly conventional tools to work with – why do you and what drew you to these for the project?

Weihl: I love the way a vocoder allows for me to play with the perception of my own voice, which is so weird and personal, through pitch and texture and to sing while feeling like someone or something completely different . It’s an easy way to express emotions through and with a machine. I also just happen to really like the way it sounds.

The theremin, which was invented in the 1920s carries a sort of mystique and magical connotations because its played without physical contact. It was also used a lot in early sci-movies. I’m a big fan of sci-fi literature and films and I wanted to make some of the sounds for the live show in a more theatrical way as I’m all alone on onstage, so by dancing and moving your body in relation to the theremin you can also make sound which I find fun and kind of freeing.

Guitar was my first instrument and its mostly still the instrument I use when working out songs. At the moment I feel more and more drawn to playing synthesizers and keyboards and I feel like I’m still figuring out what to do on stage, but for now it just feels right.

KALTBLUT: How did you find this sampled narrative for the beginning of the video?

Weihl: I had a radio show called “Spacebar” for about a year on Bytefm and it had to be in German. My German is fine but I’m forever shy about how I sound. So to avoid speaking as much as possible, I always included a lot of sound samples. Each show had a different theme (rain, cars, capitalism) and I got really into collecting pieces of old science documentaries, cable access videos, television commercials, things like that, and developing this funny internet archive of material.

When I started making my video, which was shot on VHS, I wanted to find some non-HD underwater footage and came across this TV show from the 1960s called “The Undersea World of Jacques Cousteau”in my archive. While editing the video in my studio, where there is no WIFI and therefore procrastination options are limited, I actually started watching the documentary. I was just clicking through and landed on this moment when Cousteau is talking about organized systems of water, which is exactly what the video is about. Then he spoke this beautiful quote which I later found out is from Algernon Charles Swineburn, a writer who was born in the late 19th century.

“I will go back to the great sweet mother,
Mother and lover of men, the sea.
I will go down to her, I and none other,
Close with her, kiss her, and mix her with me.”

KALTBLUT: How intentional is “Fall Apart” as your debut release and what can your audience expect for your next?

Weihl: “Fall Apart” is one of the first songs I wrote with this project and I had an idea for a video right away so I would say the decision was more intuitive than intentional. My plan is to make a video for every song – let’s see if I can keep that up :)

I’m working on finishing a collection of songs now that range from melodic emotional pop to sound collage to more instrumental music. I’m trying not to limit myself and explore new things that feel relevant to me, so I guess you can expect the unexpected with some of the expected thrown in the mix.