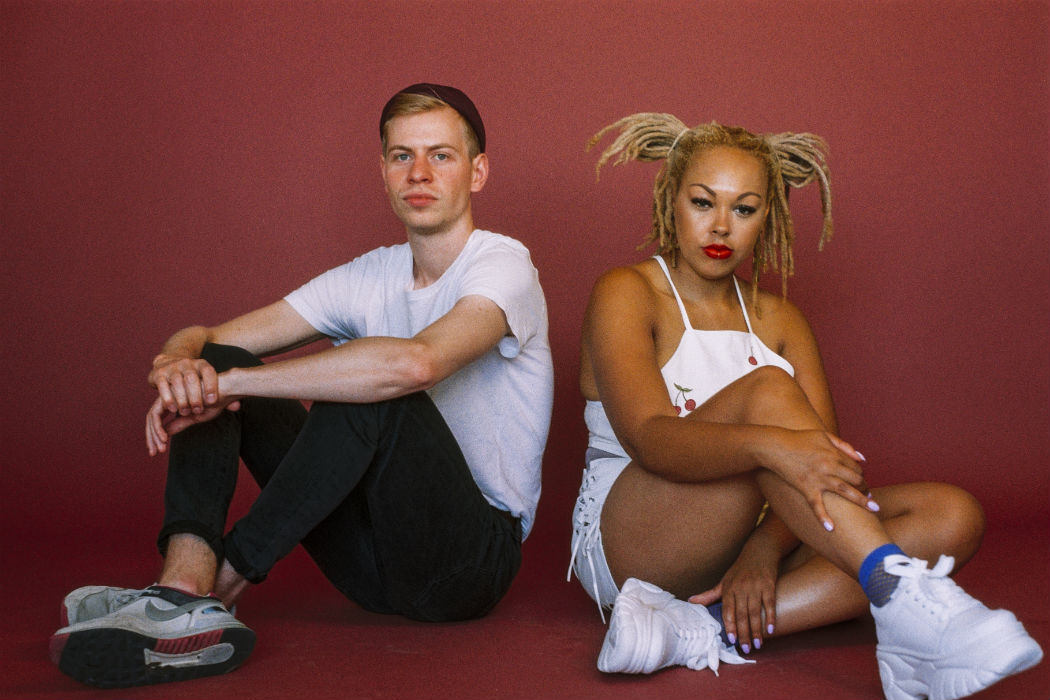 Nottingham native Harleighblu teamed up with Jakarta producer Bluestaeb for lush neo-soul jam, ‘Cake’. “It’s about going for what you want in life… Having your cake and eating it, ” Harleighblu expands on their first collaboration track, “The lyrics “Don’t wanna, don’t wanna go elsewhere” highlight the fact that you are living your best life now – Right now. Not tomorrow!”. Joining forces with director Christoph Eder the video for ‘Cake’ captures Harleighblu’s raw style against some of Berlin’s most iconic brutalist architectural gems such as the Bauhaus archive, the Oscar-Niemeyer-Haus and ICC Berlin. A stunning blend of progressive electronics and thumping beats, ‘Cake’ pushes the boundaries of typical R&B and firmly plants the two as one of the hottest acts to keep an eye on this year.

“The song ‘Cake’ and also the music video introduces Harleighblu and Bluestaeb as a team,” director Christoph Eder expands on the video. “It’s concentrated on simple settings and both of them exploring the city. We played with colours, light and different types of architecture. I hope it will leave the people with hunger for more… The most important thing for me is to recreate the vision of the music in a visual way.”

Harleighblu heard Bluestaeb’s music for the first time in London’s Jazz Café in 2016, approached him to work on the album shortly after that.

“When I got the Demo Recording from Harleighblu I was blown away,” Bluestaeb explains, “I’ve worked with multiple singers before, but this time I felt that somebody finally really knew how to handle my beats properly and turn it into a song.”

The multinational duo decided to search for new ways to express their common love for uncompromised hip-hop and R’n’B. The collaboration has achieved a distinctive sound that merges old school aesthetics with a new school attitude and organic instrumentation. Bluestaeb has proven himself, as one of the key figures of a new generation of Hip-Hop producers, removing genre-specific labels and creating very distinctive instrumentation. His solo efforts ‘Rodalquilar’ and ‘Everything Is Always a Process’ released via Berlin-based tastemaker label Jakarta Records have been internationally praised for their warm characteristic sound receiving airplay on Soulection, BBC 1, Rinse and many more.

Bluestaeb’s approach complements Harleighblu’s performance perfectly as she stakes her claim on the neo-soul hip-hop territory she always identified with as an artist.

Hailed as ‘the new queen of soul’ with references to Nina Simone, Lauryn Hill and Amy Winehouse, Harleighblu’s signature sound has matured into a frank, self-possessed voice that pulls no punches and makes no apologies. Bringing us honest, feminine, yet unrepentant lyrical touches and establishing herself as one of the UK’s most promising young artists.

Harleighblu introduced herself in 2013 with the charismatic, beat-heavy soul of her debut LP ‘Forget Me Not’ which was championed by 1xtra’s Mistajam and BBC 6 Music’s Don Letts. Since then she has not looked back, garnering critical acclaim for her unique style from the likes of Complex, Dummy, The Line Of Best Fit and Clash to name but a few. She has performed at prestigious festivals such as Glastonbury, Bestival, Kendal Calling, Boomtown and the Giles Peterson Worldwide festival.

2019 will see the Harleighblu headlining alongside Bluestaeb at the respected Lollapalooza festival in Berlin, as well as playing Croatia’s biggest underground music festival Outlook, with more dates to be announced.

Harleighblu & Bluestaeb will release new music throughout 2019, with their full album to follow autumn 2019.