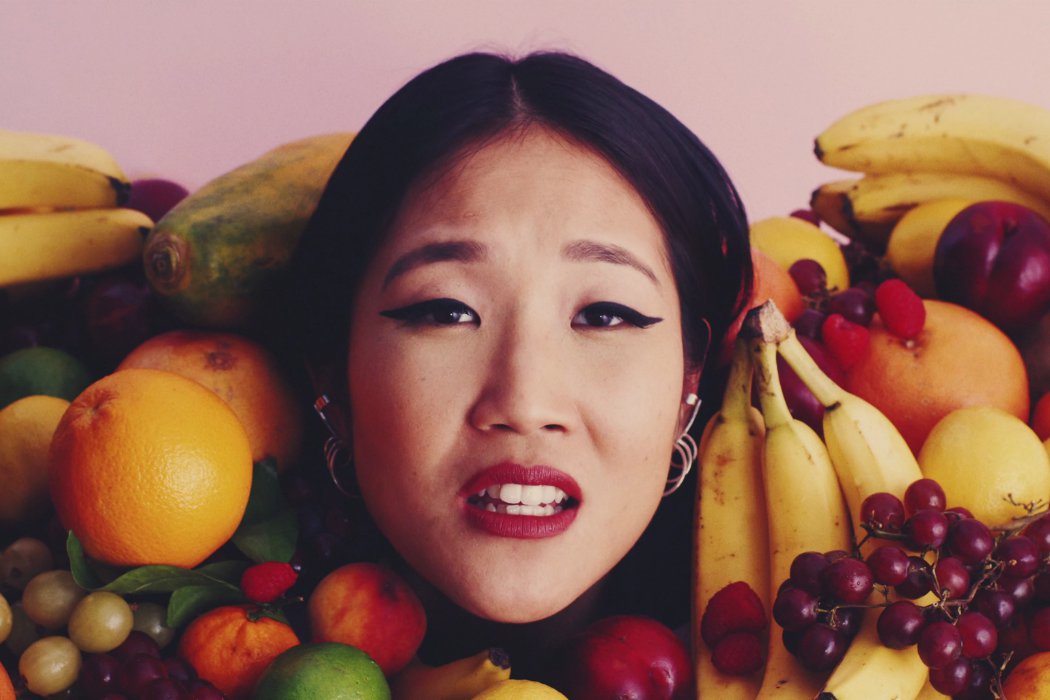 For Momoko, her project reflects the convergence of a number of things that she’s been obsessed with since she was a teenager: making songs, creating images, and thinking about the relationship between cultural projects and the ideas they circulate. Beyond its playfulness, this new video for her track “Maintainers” explores the tension in our modern world between constantly being bombarded with the stuff that’s supposed to light up our pleasure centres (think, scrolling through Instagram at 3am), and wanting to smash all of it because none of it is what we actually need (think, waking up at 7 am after getting only 4 hours sleep because – scrolling). Written just before the US presidential election in 2016 she channelled some of those intense feels into her music….and took them out on a hell of a lot of fruit. We had a chat with her about her creative process, being a young artist in NYC and what’s next for her.

From Jillian Mackintosh, the director of the video:
“We wanted to create a music video that explores topics of labor, sexuality and cultural assumptions of women. I drew inspiration from contemporary artist Kawita Vatanajyankur whose work is unavoidably compelling and perplexing to watch. The result is something that dances between the expectation of the viewer and the deconstruction of these expectations, resulting in provocative and beautiful carnage.”

KATLTBLUT: We love the pop influences in your music but it’s also tinged with a sense of humour and a real attitude which is totally up KALTBLUT’S Strasse. We’d love to introduce you to our readers in your own words, can you tell us more about Momoko and how you got started?

Momoko: I’m glad that you mention the humorous bent of all of this, and that it’s beginning to come through! The duality of being totally serious about ideas but extremely light and fun about life is important to me, both personally and creatively. I started writing songs when I was 15 and picked up Logic Pro in college — which has been an important songwriting tool for me ever since. For a long time, I’ve felt that the things interest me most are usually responsive to the larger context they occupy, whether that’s a specific corner of the music industry, art world, publishing realm, etc. I’m drawn to things that consider the expected conventions of the thing and then surprise you by doing something that strays from these conventions. Some recent examples of this for me include: Chance the Rapper buying the U.S. news site Chicagoist and announcing this in the lyrics of a newly released song, or Moses Sumney writing a whole album that questions our cultural preoccupations with romance. I also really like Björk’s exchange with the philosopher Timothy Morton, whose work has been influenced by Björk’s music and vice versa.

KALTBLUT: We love the energy and boldness of the direction in the video for “Maintainers”. Also, how tongue-in-cheek it is, and both entertaining and unsettling at the same time. That feels somewhat a mirror of our current times… Can you tell us more about the idea behind the video?

Momoko: The original idea for the video sort of emerged fully-formed one morning, after a long back-and-forth with the director, Jillian Mackintosh, and her partner, Joe Lumbroso. (It was one of those ideas that actually ended up ruining an entire Sunday because I couldn’t stop thinking about it!) To backtrack a little, the song itself is about feeling stifled by your own inability to change things in truly meaningful ways within a fucked up world, but then realizing that fucked-upness has been built on the back of you and your allies. So there’s a redemptive tone to the end of the song, which comes through in the coda. I was also thinking about how being angry is much more interesting than not being angry, especially if you get to occupy a world filled with what seems like endless sources of pleasure. So the two points I started with for thinking about the video were anger and like, suffocation. The smartphone game Fruit Ninja was the original source of inspiration for the whole thing—that’s what I couldn’t get out of my head that Sunday. It struck the right tone of being violent but ultimately comical in terms of the uselessness of its objective: slicing fruit mid-air before it falls on the floor. This kind of futility reminded me of a lot of other kinds of uselessness that ultimately feels suffocating to me sometimes. 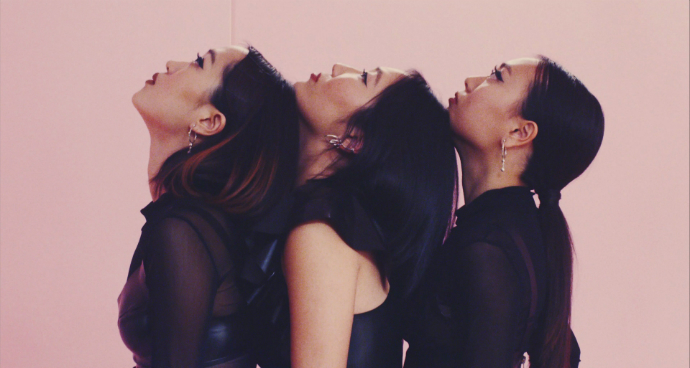 KALTBLUT: How about the lyrics of the song, you talked about the importance of joining forces and teaming together as our only hope – this is a big topic for so many young and creative people right now. What does it personally mean for you?

Momoko: I wrote this song in the summer of 2016, right before the U.S. presidential election, so it was definitely influenced in part by that climate and the kinds of reading I was doing then. But I guess the song is more about the personal and psychological dimensions of dealing with that kind of craziness as an individual…what does it mean to try to understand a super complicated world that seems to make little sense sometimes? How do you deal with being a young person who feels like implementing any kind of large-scale change is totally out of his/her/their grasp? I know a lot of people like that, I think — super smart people who are disillusioned because they’re smart enough to know how complicated things have gotten. I think for me, the end of the song is about remembering how our individualistic outlook on society is part of the problem in the first place. And that a lot of the bad shit is dependent on our complacency; it lives for it and thrives on it…so I guess my hope lies in the possibilities of being angrier and more non-complacent, together! If I had a lifestyle brand, it would be that I guess. [laughs]

KALTBLUT: Where do you draw your inspiration from? Both inside and outside of the music world?

Momoko: I try to pay attention to a lot of things; that’s sort of the way I’ve always been. Lyrically, I’m often inspired by films or headier non-music related texts I’m reading. I also studied art history, so it’s been interesting to also have that perspective when thinking about visuals or concepts. Occasionally, a song helps me understand something in my personal life…although these days, I’ve been trying to find more inspiration from historical sources and the lives of other people I know, and not write love songs since there are already enough of those in the world.

KALTBLUT: What’s it like being creative in NYC? Here in Berlin, there’s still a lot of relative freedom for artists and musicians to create on their own terms, can you tell us more about your experience as a creative in NYC 2018?

Momoko: As you can imagine, it’s definitely not easy! In my mind, the challenge is much more about time than money, although the two are obviously inextricably linked. That said, I’m here for the people — I haven’t really stopped meeting brilliant and talented strangers since I moved here in 2012. There may not be as many natural spaces to congregate anymore, and I know that so much collaboration happens online now…but it’s also kind of crazy how much my creative work has been shaped by crossing paths IRL with people who either have great ideas that emerge through conversation, or become great collaborators. I think New York can still be a great city to bounce your ideas off of, so long as you focus on actual people, and not industries. 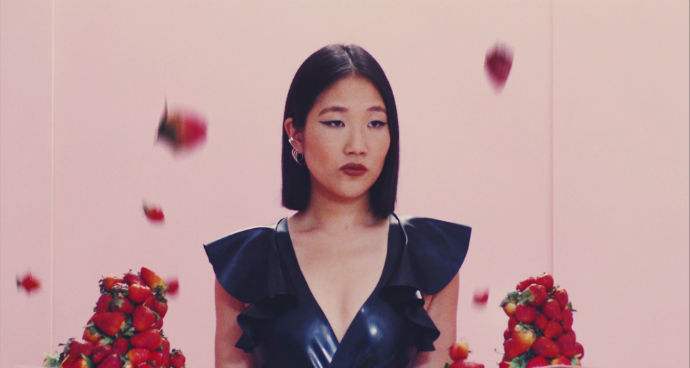 KALTBLUT: What message do you want to promote with your music?

Momoko: I can’t claim to have figured it all out yet, but in an ideal world, I’d want this project to help destabilize certain norms that I think could use destabilizing. I think that’s also why I’m interested in music, which comes with a built-in platform of all these other vehicles for ideas: performance, still images, film, text, and fashion.

KALTBLUT: You have a bold look and original aesthetic. Especially in this video, we love love love the styling! How do you feel fashion intersects with your music making? Do you work on this yourself or in collaboration with others?

Momoko: Thank you! I had never worked with a stylist before this video, but the director knew someone (Sofia Amaral) who did an amazing job. The shiny black polyurethane look was something that I noted in the original video treatment since I thought it would look good against millennial pink. Sofia really understood what I was going for and interested in from the minute we spoke on the phone for the first time, so it was really great to work with her. Fashion is one of the many things that I’ve always paid attention to casually. I’m interested in it as another place to say something or to make some sort of contradiction. In our current social media-obsessed environment, I think it’s also obvious how styling has become disproportionately important in terms of messaging via images people see for two seconds. But yeah, I think fashion for me is part of the fun side of things in that duality I noted earlier…it helps me offset some of the seriousness, ha. I also like how it sometimes helps me feel like I’m participating in a culture that’s separate from the social spaces that are immediately available to me, which sometimes feel too self-serious and heady.

KALTBLUT: You launched your debut EP in 2015, what’s next for you – do you plan to release an album?

Momoko: We’ll have to see, since the going model has gotten so weird these days…but I have a few tracks that will probably be singles coming down the pipeline, along with a body of songs with a close collaborator that I really believe in, which I think could be an E.P. down the line. I’d like to make a full-length one day and feel more ready to do so than I ever have. But not yet, not without the right budget!

KALTBLUT: We couldn’t help but ask after getting immersed in the new video…what’s your all-time favourite fruit?

Momoko: Haha, I’m glad you asked. Despite my name meaning “peach child,” I think I’ll go with the muscat grape, which I’ve only ever eaten in Japan. The flavour is so different from a normal grape and so distinctive!

KALTBLUT: What’s next for you? What do you have coming up in the next months? Are there any live shows in the pipeline? We’d love to tell our readers where they can catch you on stage.
Momoko: I’m taking a temporary hiatus from playing live shows at the moment to focus on writing, recording, and developing visuals around new work, which I’m really excited about. I love performing and it feels really important to my practice, but right now I think it’s more interesting to think about having a digital reach, and what that might mean in terms of churning out songs, visuals, and the like.