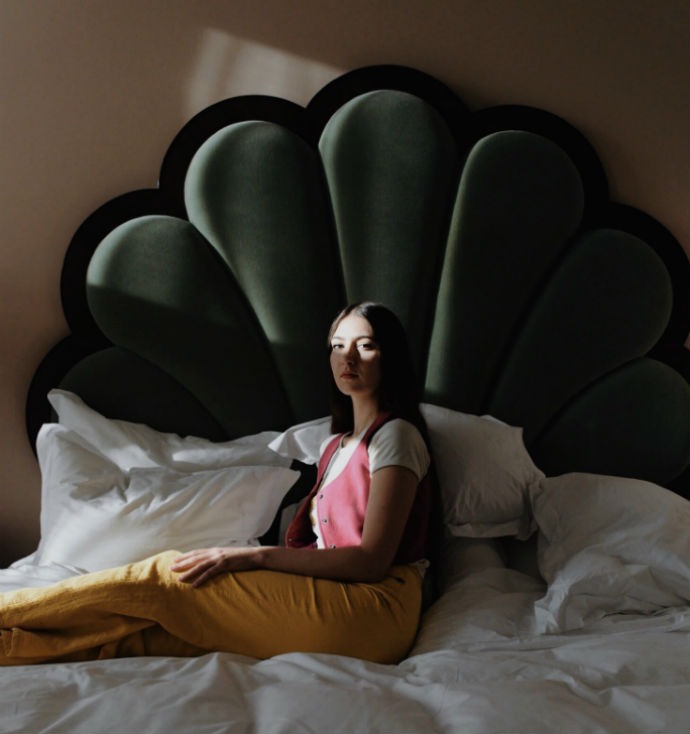 Interview: Weyes Blood on smashing and sinking, yet still coming out with something extraordinary

Natalie Mering is the force behind Weyes Blood, a project that’s found its own recognizable, often ethereal atmosphere, despite how much everything has changed. Her upcoming full-length album Titanic Rising will be released via Sub Pop on April 5th. It’s obvious that what’s next to come is extraordinary. Written and recorded within the first six months of 2018, the upcoming release is the culmination of three albums and years of touring. “Andromeda” is the first single from the album already telling a memorable story where “everybody is their own galaxy”. On Mering’s recent visit to Berlin, she sat down with KALTBLUT to explain her experience behind Titanic Rising in which she describes an era where she is totally comfortable saying exactly what she thinks.

“I think I am expanding and stretching my tentacles and ambitions in a way that I haven’t done before. I couldn’t tell you where it’s going. I know where I went on this album, but there’s no game plan. It’s just me expressing myself.”

“Titanic Rising” certainly raises questions just around the title and in a recent interview with Pitchfork, Mering confirmed the heavy themes involved within the album: climate change, overconsumption of natural resources, and the ever-evasive experience of real human connection.

“The name of the album is referencing a couple of different things at once: Titanic Rising was this concept of how something as big and iconic as an event like the Titanic, which was something I was pretty obsessed with as a kid even before the movie came out. I always felt this strange connection and, really, the hubris of man was such a big focal point of that film. I thought it would shift everybody’s perspective on man’s dominion over nature, [while] growing up and realizing that that’s certainly not the case at all. I see now with the rising sea levels and the melting polar ice caps, it’s almost like the opposite of Titanic. As opposed to smashing into an iceberg and sinking and the third class suffering, we’re slowly melting the iceberg to sync the third class of the world. These countries don’t have the resources to really deal with rising sea levels. It’s like a weird parallel version of the iconic event itself. We’re all kind of sinking.”

In comparing her current home, Los Angeles, to previous cities she’s lived in, this newfound creative freedom allowed the album to find a particular way where Mering found a vibe akin to “the Kinks meet WWII or Bob Seger meets Enya.”

“In New York, things are so tight. In LA, there’s a little bit more space, a little bit more imaginary realms. As a city, it’s like a prop up set. Your imagination can really run wild. There’s a lot of rich history of musicians going there to make albums, just getting to their own weird culty zone and not really be affected by the city itself.”

Mering recorded her last two albums, including Front Row Seat To Earth, in Los Angeles, where strong narratives, a collective intuitive undercurrent rides through each song – from beginning to end – especially on the upcoming release.

“What’s inspiring to me about LA is that it’s still wild – it’s still the Wild West in a lot of ways, and yet there is something about it that I relate to on a deep familial level, having most of my extended family be from there to California in general. I feel like there is this sense of anything goes. There’s a lot of illusions and there’s a lot of negativity that can come with that, but I’ve chosen to extract the positive aspects of it. I feel very free.”