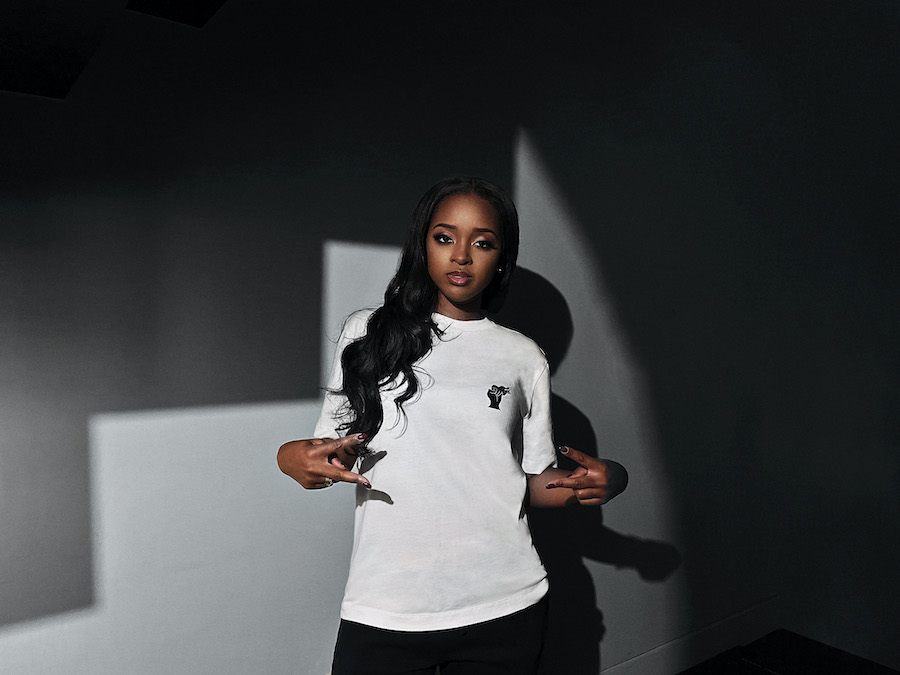 To commemorate the death of Breonna Taylor, ARMEDANGELS launched a campaign that brings together Black and Indigenous voices, expressions and stories. This project is not just about Breonna or George or any of the countless others who have died at the hands of the police in America. It’s about standing in solidarity against all black and indigenous suppression around the world. 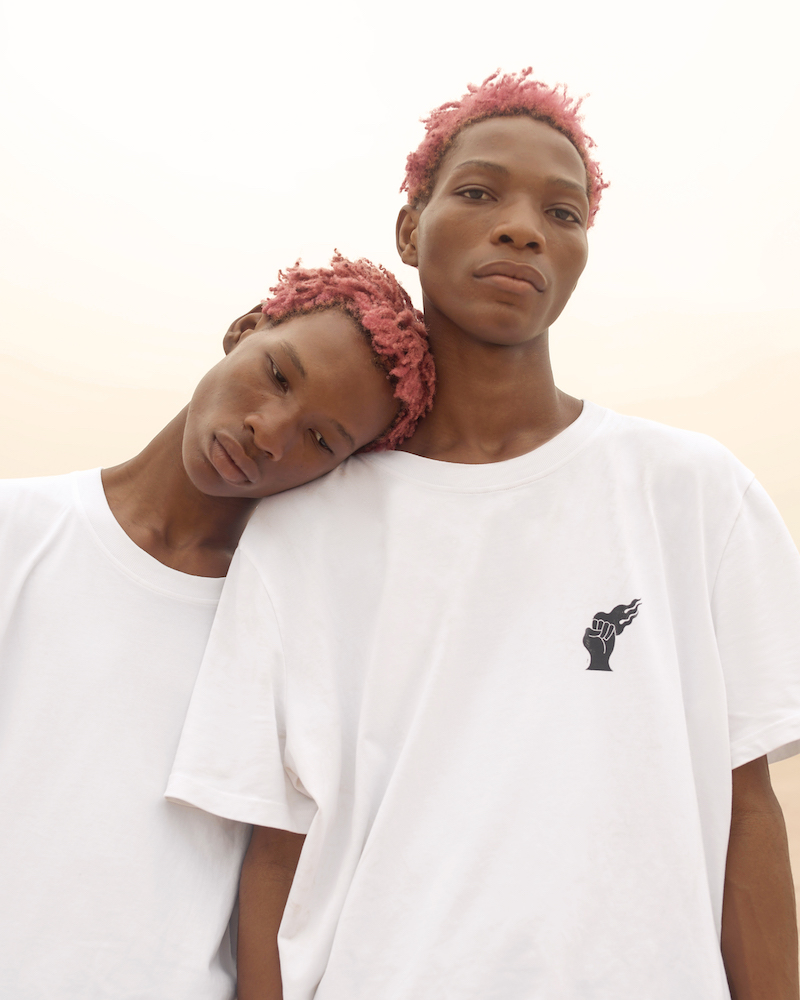 “We at ARMEDANGELS exist to use business to protect our planet and the people on it.
With our clothes, our action and our voice. Our Solidarity Series is an ongoing series of charity T-Shirts to fund those on the frontlines of the fight for a better world, bring activists together, and spread their messages. This first edition is a collaboration with US Activist, Tamika D Mallory, featuring the ‘Speech of a generation’ she gave after the killing of George Floyd. 100% of the funds raised to support her charity, Until Freedom. Lawyers, Activists and Organizers fighting against systemic racial injustice throughout America.” 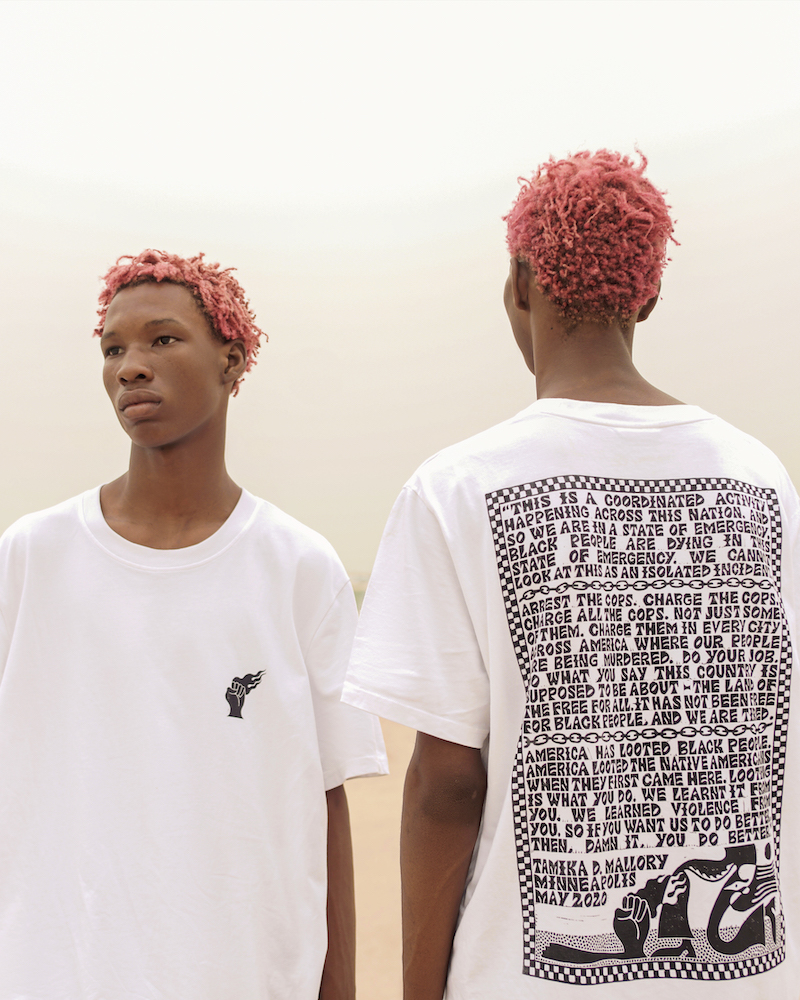 Breonna Taylor was killed by police on 13th March 2020. The launch took place this date in the centre of their activity. Because Until Freedom are so close to Breonna’s family, and because Tamika’s story behind the speech starts with Breonna’s grieving family.

How did the “Speech of a generation” come about?

Until Freedom went to Louisville because Breonna Taylor had been killed and there wasn’t enough attention about her case. Before we left for Minneapolis, we were asked to look at a video. I saw a police officer kneeling on the neck of a black man, and I turned away. I refuse to watch the video, but I saw the emotion that came over my entire team.
And so, when I arrived in Minneapolis, my heart was broken. I was enraged. And if you know anything about me, I generally take a lot of time to write speeches and work with people who I trust and respect to come up with the best content possible. I wasn’t able to do that. I was asked to speak. It was really quick. All I had was my thoughts and my pain and my reach. And I just spoke from my heart.

That speech is now almost one year old. Why do you think the words that are printed on this shirt are still so relevant?

The words on this t-shirt are still relevant at this moment because they’ve been relevant for over 400 years. Black people in this country who are aware of what’s happening around them are generally caught between a place of rage, deep anger, and trying to just go about life every day. And the state of emergency that we’re in, that we’re currently up against is something that’s perpetual for us. We don’t get to put it down. We don’t get to separate ourselves from it because it could be any one of us any day.

What do you want to say to the supporters and allies out there?

Allies are so important. Those who stood for Briana, those who kneeled for George Floyd. Some of them are not from our communities, they’re not from this country. They don’t look like me. They don’t look like any of the victims, but they have begun to understand that there is a crisis. That there is a situation happening with black people that have to be addressed. And that doing nothing, not getting involved, making a commitment and choosing to sacrifice time, money, other resources, even relationships to try to change it, is not okay. It’s not okay to sit by and do nothing.

Freedom is not free. And we at Until Freedom appreciate the partnership between ARMEDANGELS and our organization so much. 100 % of the proceeds go towards helping us continue to do our work. Please support them.

Meet @nemonte.nenquimo Amazonian Waorani leader, winner of the @UNEP Champion Of The Earth Award, and the only indigenous woman ever to be listed in @time magazine’s 100 most influential people in the world.

In 2019 Nemonte together with her people, led a fight against the oil industry and won, protecting 500,000 acres of rainforest. Systemic racial injustice impacts the lives of Black, Indigenous, and people of color. Nemonte is now lending her voice to support.

Poet, organizer, educator and author @mobrowne supports @tamikadmallory through a reading of her activism poetry in our @armedangels #solidarityseries fundraising shirt. 100% profits from sales of the shirt go to @untilfreedom in the fight against systemic racism.

To support the launch of the first #solidarityseries fundraising shirt, @ebinumbrothers interpret the struggle against Systemic Racism.

Based in Lagos, Nigeria, Victory and Marvel Ebinum are a self-taught dance duo with a unique and expressive skill set as choreographers, artists and directors.

In support of Black lives.
#SOLIDARITYSERIES
The fight is not over.

Thank you for the music @builders_tea_.